Accessibility links
Momentum Grows Against Bullfighting In Spain, As Thousands Rally : The Two-Way Protesters on the streets of Madrid chanted that bullfighting is "torture — not art or culture!" Supporters say it is a crucial part of Spanish culture. Fewer and fewer Spaniards support the pastime.

Momentum Grows Against Bullfighting In Spain, As Thousands Rally

Momentum Grows Against Bullfighting In Spain, As Thousands Rally 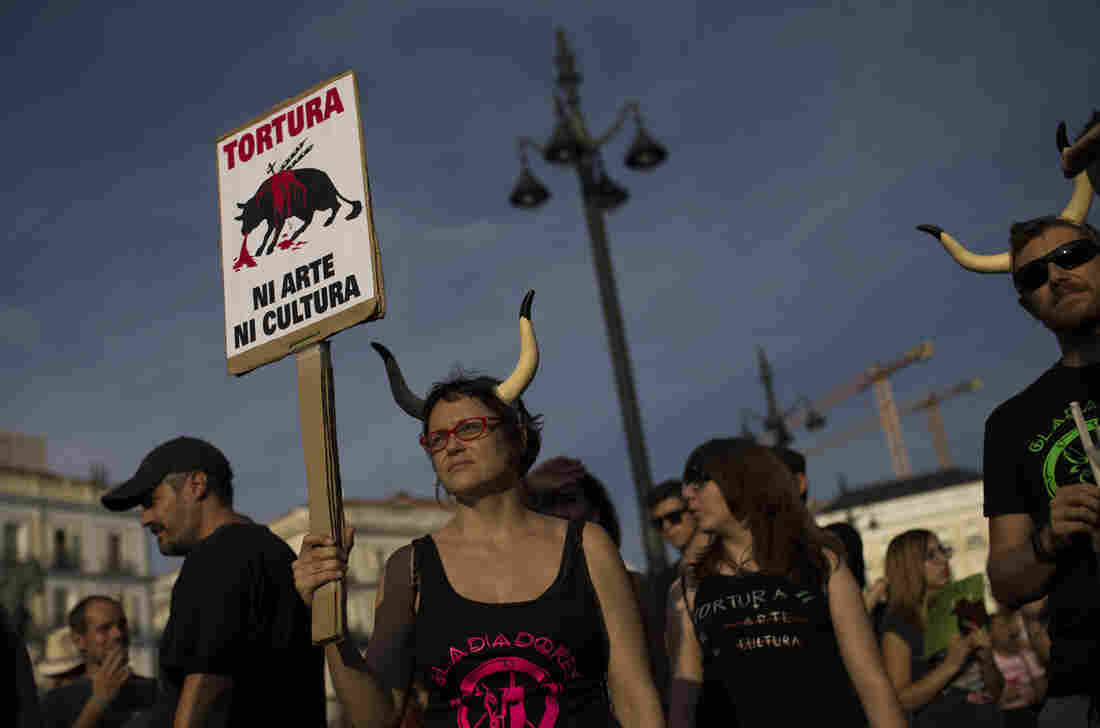 People listen to speeches during a protest against bullfighting in Madrid on Saturday. The placard reads in Spanish: "Torture is neither art nor culture." Francisco Seco/AP hide caption 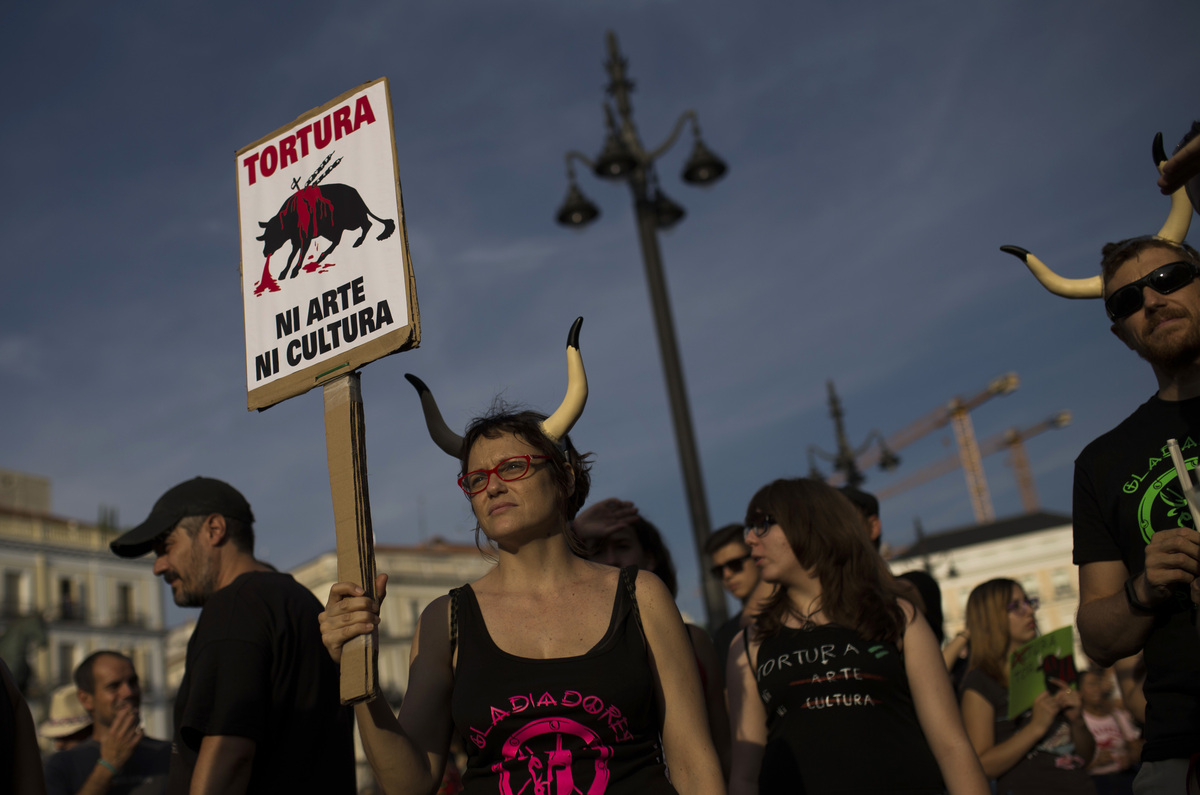 People listen to speeches during a protest against bullfighting in Madrid on Saturday. The placard reads in Spanish: "Torture is neither art nor culture."

Thousands gathered on the streets of Madrid to protest bullfighting, chanting that it is "torture — not art or culture!"

This demonstration comes amid growing momentum in Spain against the centuries-old tradition, as reporter Lauren Frayer tells our Newscast unit. It was organized by Pacma, an animal rights political party — and the group says it was "the biggest anti-bullfighting protest to date," as Reuters reports.

Supporters of bullfighting consider it an inexorable part of Spanish culture — and activist Jorge Rodriguez tells Frayer that it's hard to change people's minds.

"Our traditions are linked to our history — to the weather, to the culture, to the people. It's a lot more than hurting animals for the sake of hurting animals. It's rooted — and that's why it's so difficult to get rid of it," Rodriguez says. 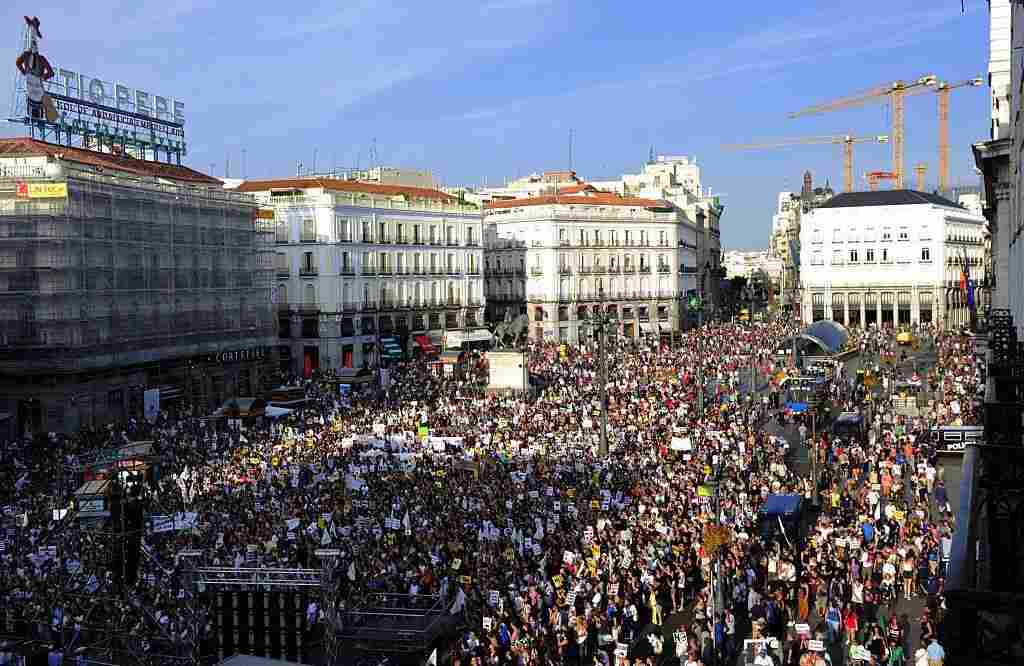 "Bulls feel and they suffer," demonstrator Chelo Martin Pozo tells The Guardian. "Bullfights are a national shame and if they represent me, then I am not Spanish."

Frayer says a graphic viral video has energized the movement against the practice. "Last month, animal rights activists [from Pacma] went undercover to film a medieval festival south of Madrid, where a baby bull was stabbed and killed in the bull ring by amateurs," she reports. "Video of the scene with children cheering went viral — with 20 million views in 24 hours. Many Spaniards were outraged that such torture is legal here."

There have been signs of change recently. This week, "a popular festival that used to involve spearing bulls as they run through the streets will go on — but without the bulls being killed. That part has been banned," Frayer reports.

According to the Associated Press, "at least 17 Spanish cities and towns have cut municipal funding for bullfights and bull runs, or passed legislation condemning or banning it since the new leftist party Podemos won its first seats in local and regional elections a year ago." The Catalonia region banned bullfighting altogether in 2011, as NPR reported.

Fewer and fewer Spaniards support the pastime. "An Ipsos Mori poll from January, carried out for animal welfare organisation World Animal Protection, found that only 19 percent of adults in Spain supported bullfighting, while 58 percent opposed it," as Reuters reports.

Bullfighting does have powerful supporters, including Spanish Prime Minister Mariano Rajoy, as the BBC reports. It adds that fans, which are known as "aficionados," have also recently rallied in favor of the tradition.