Accessibility links
'We Will Never Forget': Nationwide Ceremonies Mark 15 Years Since Sept. 11 : The Two-Way The names of each of the nearly 3,000 victims of the Sept. 11 attacks were read at a ceremony at the World Trade Center site in New York City. Events were held nationwide, including D.C. and Pa. 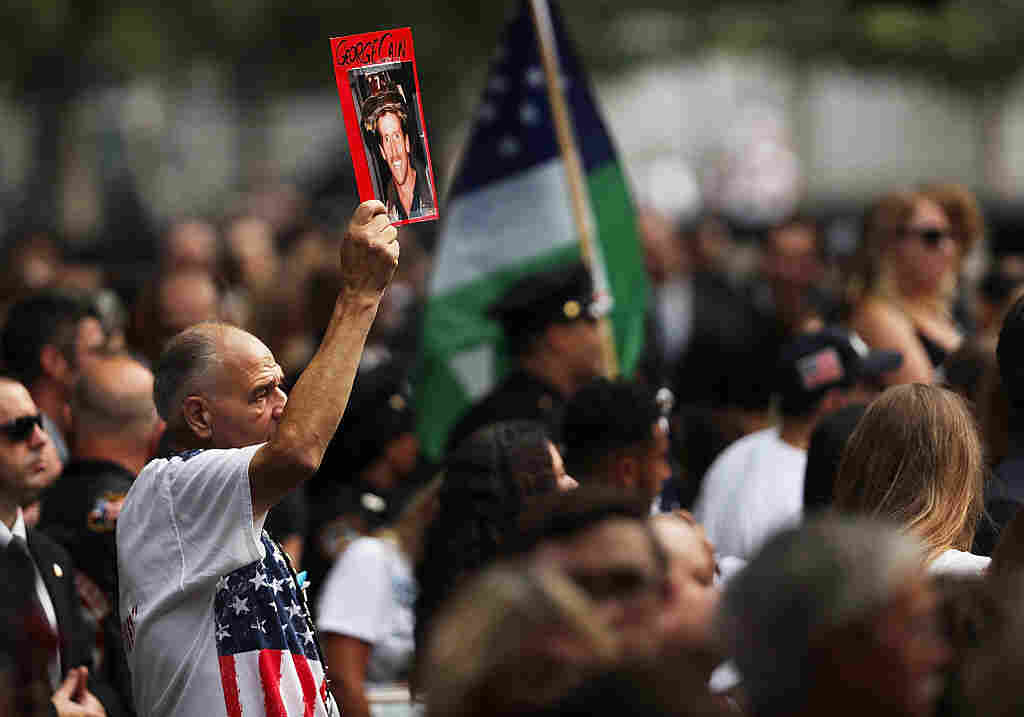 A commemoration ceremony is held for the victims of the Sept. 11 terrorist attacks on Sunday at the National September 11 Memorial and Museum in New York City. Spencer Platt /Getty Images hide caption 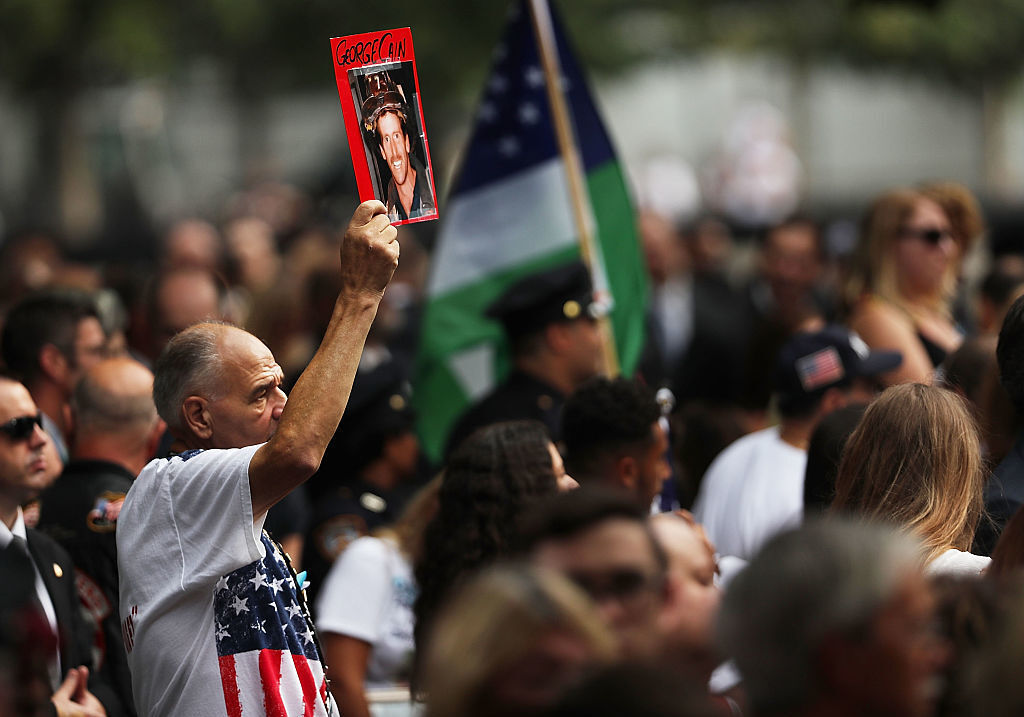 A commemoration ceremony is held for the victims of the Sept. 11 terrorist attacks on Sunday at the National September 11 Memorial and Museum in New York City.

The names of each of the nearly 3,000 victims of the Sept. 11 attacks were read at a ceremony at the Sept. 11 memorial plaza, at the World Trade Center site in New York City. This marks the 15th anniversary of the attacks.

Family members came forward to name and honor their relatives who died at the World Trade Center, the Pentagon and on Flight 93. The event also commemorated the victims of the 1993 World Trade Center bombings.

As WNYC's Stephen Nessen told our Newscast unit, family members often included an anecdote or update as well. "I heard one young man say, 'Dad, I'm starting college this fall.' One woman said 'Not a day goes by that I don't miss you. I want you to know your grandchild was born on your birthday.' "

He described the scene: "Some people are holding pictures of their loved ones. Many of them bring these signs out every single year, sort of collage photos. Many people make their own t-shirts to remember the loved one from their family that died." 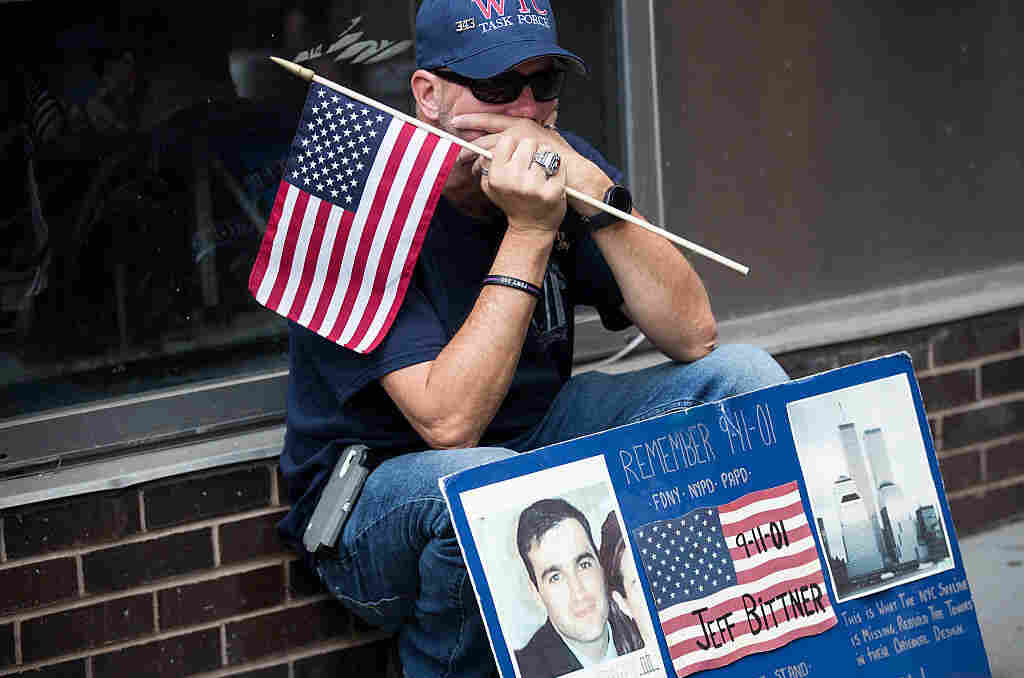 The ceremony included six moments of silence — to mark the times that the four planes hit the World Trade Center towers, the Pentagon and crashed near Shanksville, Penn., and to observe the time that each tower fell.

Donald Trump and Hillary Clinton both attended the event.

Commemoration events are happening across the country, including at the Pentagon, where President Obama spoke:

"We remember, and we will never forget, the nearly 3,000 lives taken from us so cruelly, including 184 men, women and children here — the youngest just three years old. We honor the courage of those who put themselves in harm's way to save people they never knew. We come together in prayer, and in gratitude for the strength that has fortified us across these 15 years."

During his comments, Obama reflected on the changing nature of the fight against extremists. "We stay true to the spirit of this day by defending not only our country, but also our ideals," he said. "Fifteen years into this fight, the threat has evolved. With our stronger defenses, terrorists often attempt attacks on a smaller, but still deadly scale. Hateful ideologies urge people in their own countries to commit unspeakable violence." 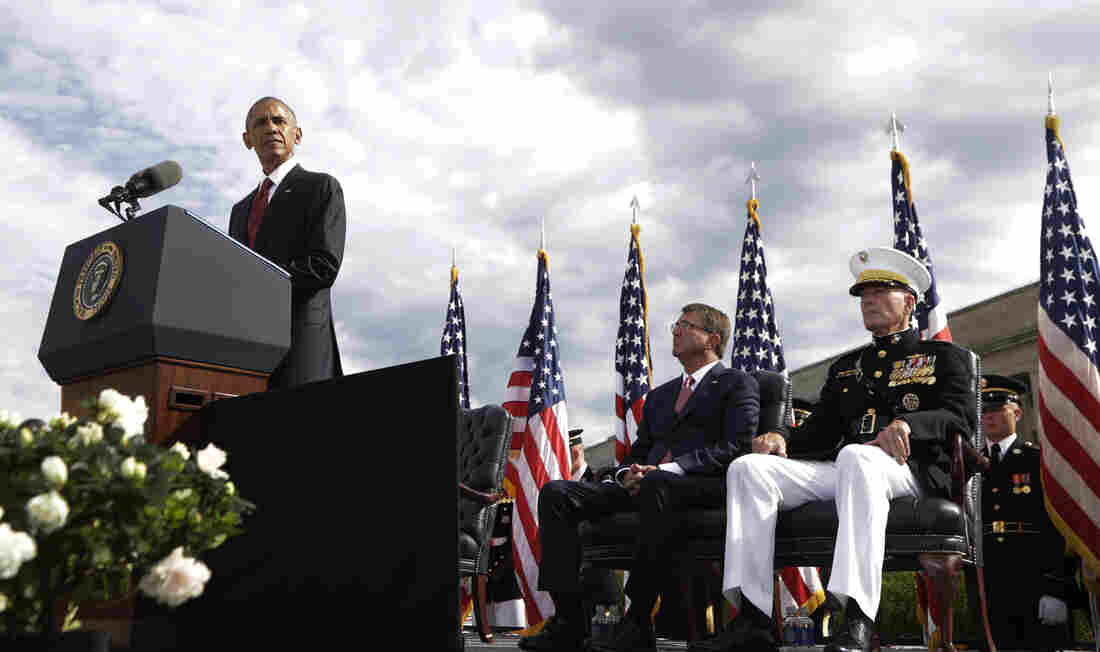 And that's why, he said, "it is so important today that we reaffirm our character as a nation of people drawn from every corner of the world, every color, every religion, every background, bound by a creed as old as our founding — E Pluribus Unum — out of many, we are one."

“We renew the love and faith that binds us together as one American family." —@POTUS on 9/11 #NeverForget https://t.co/8n4g9QzTfX

A ceremony was also held in Shanksville, Pa., where United Airlines Flight 93 crashed into a field after passengers and crew members fought off the attackers.

WITF's Katie Meyer described the commemoration for our Newscast unit:

"The mood is somber today, the ceremony which is held every year just began. A reading of the names just finished, family members read out the names of those who were lost on the flight, accompanied by the sounding of bells. Behind me you can hear U.S. Secretary of the Interior, Sally Jewell, starting her address to the people here. There's going to be speeches from a lot of people in the next hour — many from public officials. ... It's cool today, windy and cloud. Now and then the sun breaks through." 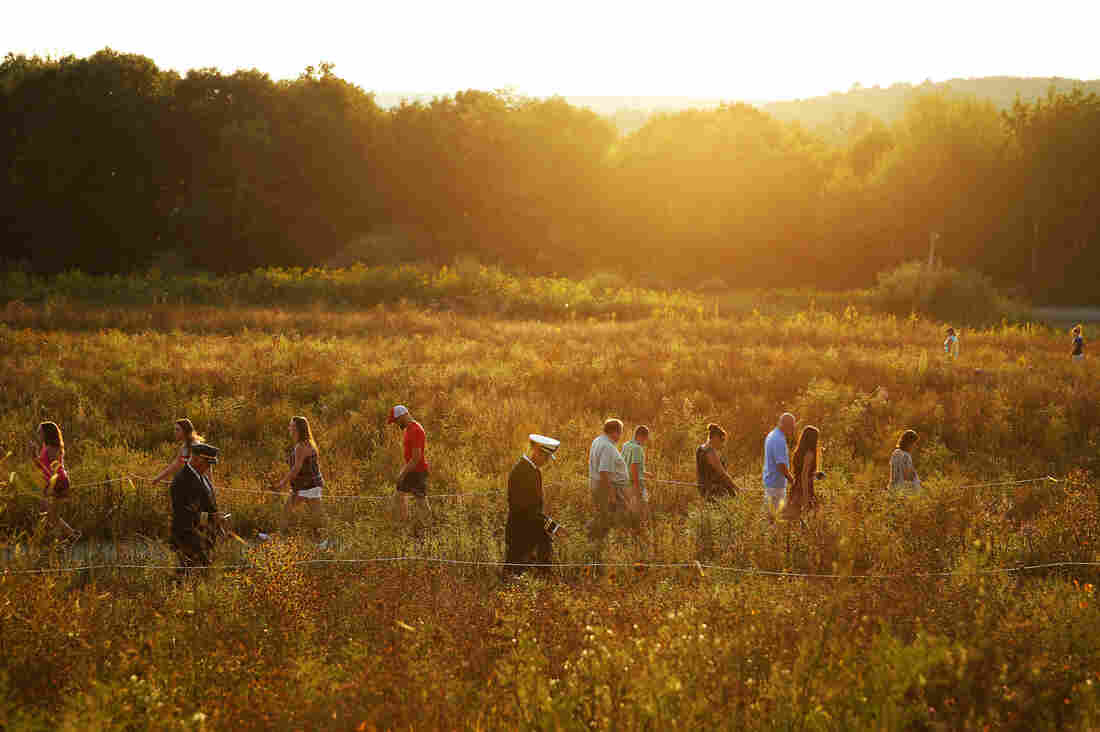