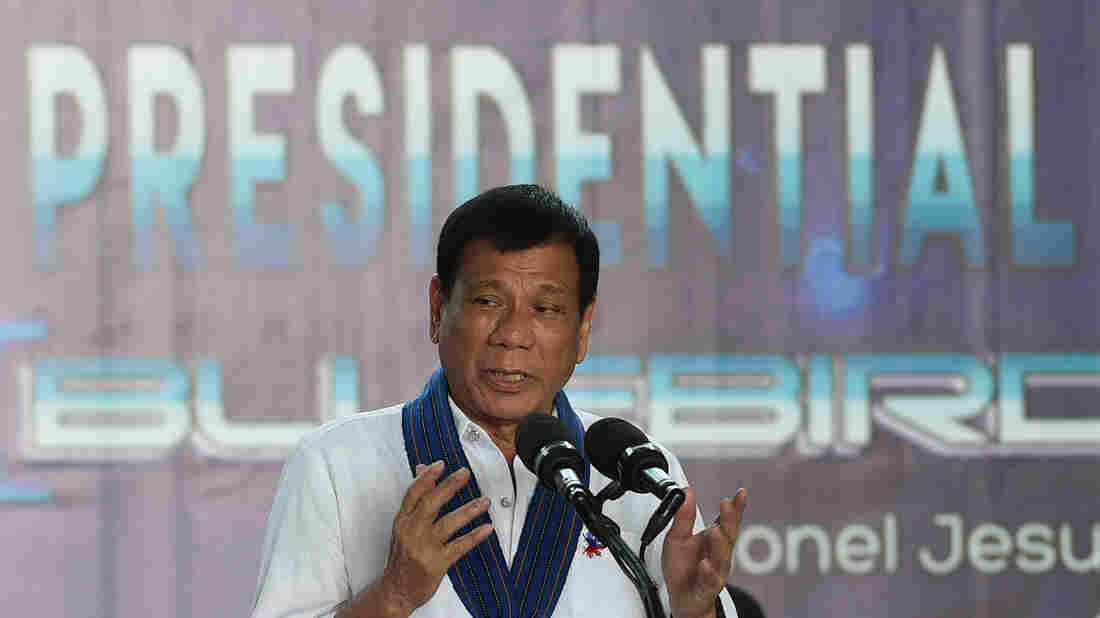 Philippine President Rodrigo Duterte delivers a speech at an air base in Manila on Tuesday. Ted Aljibe/AFP/Getty Images hide caption 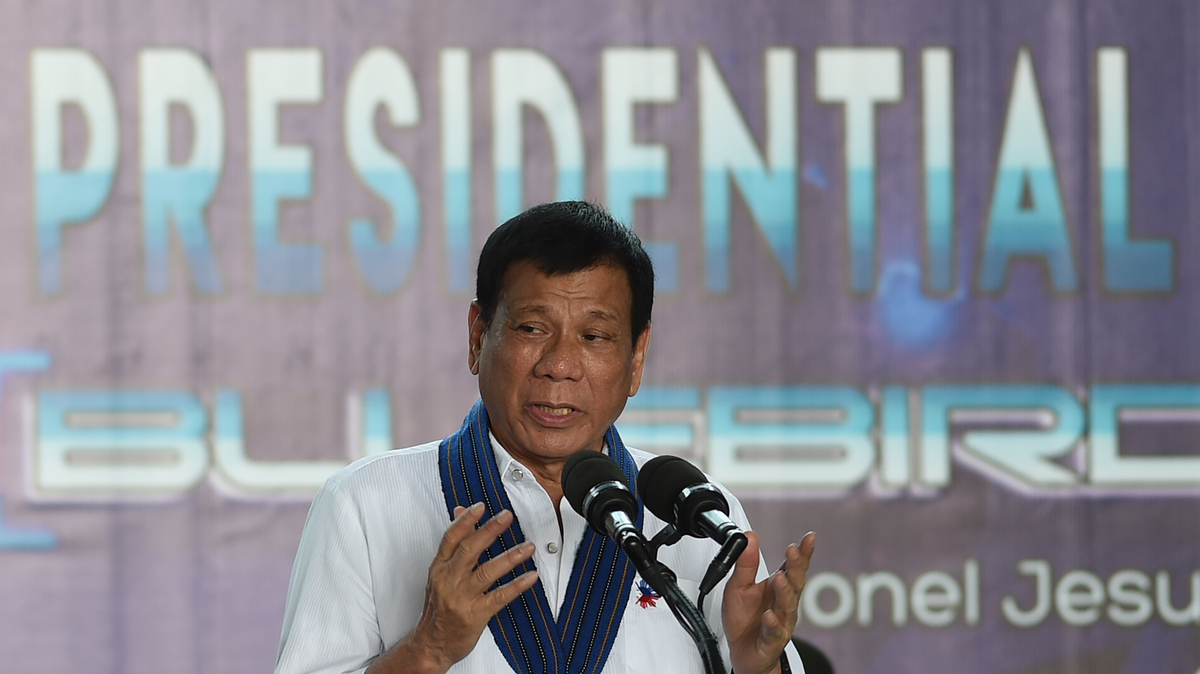 Philippine President Rodrigo Duterte delivers a speech at an air base in Manila on Tuesday.

An admitted former assassin has accused Philippine President Rodrigo Duterte of personally ordering extrajudicial killings — and, in one case, pulling the trigger.

Government officials have forcefully rejected the allegations, with Justice Secretary Vitaliano Aguirre calling the man's testimony "lies, fabrications and a product of a fertile and a coached imagination," Reuters reports.

The explosive testimony was delivered Thursday, at a Senate hearing related to President Duterte's aggressive war on drugs. More than 3,500 suspected drug users and dealers have been killed on the streets in the Philippines since Duterte took office — some shot by police, others killed under unclear circumstances, possibly by vigilantes.

The allegations making headlines on Thursday relate to Duterte's long tenure as mayor of Davao City, before he was president.

PHOTOS: Under New Philippine President, A Wave Of Extrajudicial Killings

As we've reported, Davao City was notoriously dangerous, once known as the Philippines' "murder capital." Under Duterte, many forms of crime dropped — but human rights groups say "death squads" carried out hundreds of street executions of suspected criminals.

Critics have long accused Duterte of either permitting or encouraging those extrajudicial killings. Duterte himself has variously denied and confirmed that he was responsible for the squads, and even that he has personally killed criminals.

During a television interview this spring, as Michael Sullivan reported for NPR, a TV host asked then-candidate Duterte about the 700 people allegedly killed during his time as mayor. Duterte corrected him: it was 1,700, he said.

In short, the testimony on Thursday is hardly the first allegation tying Duterte to the killings. But The Associated Press reports this is the first time anyone has admitted personal involvement in those killings — and the first time a witness has directly accused Duterte while under oath.

Human rights advocates have previously suggested that other witnesses refused to testify "out of fear of being killed," the AP notes. 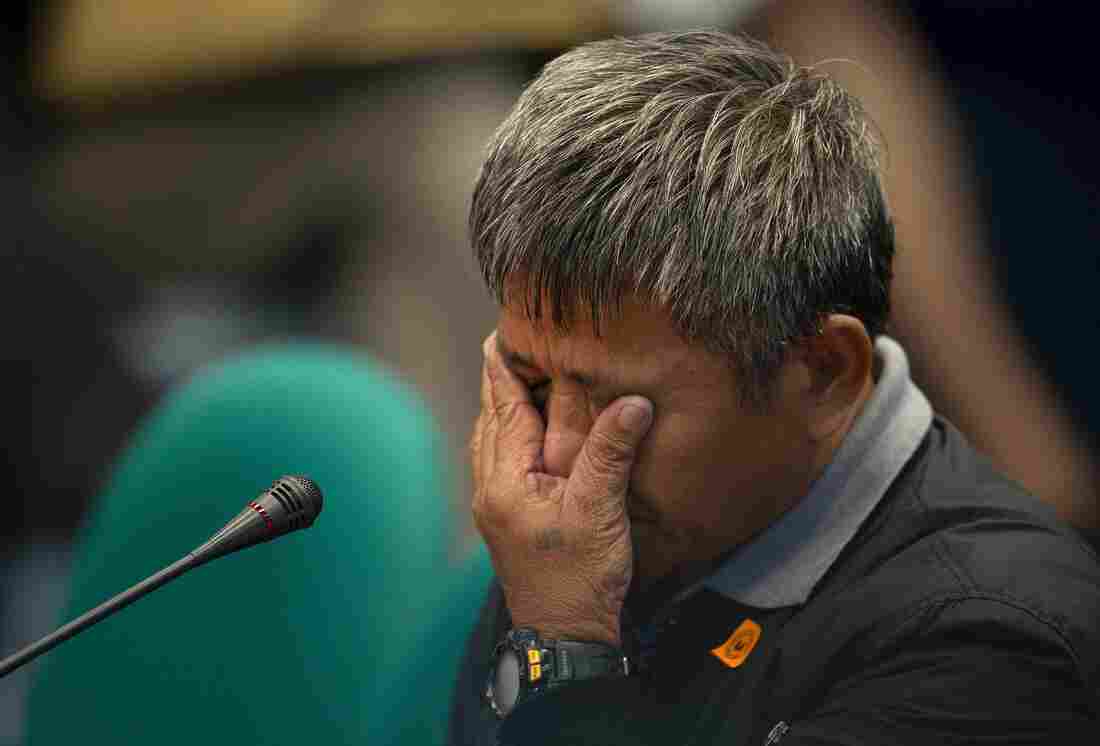 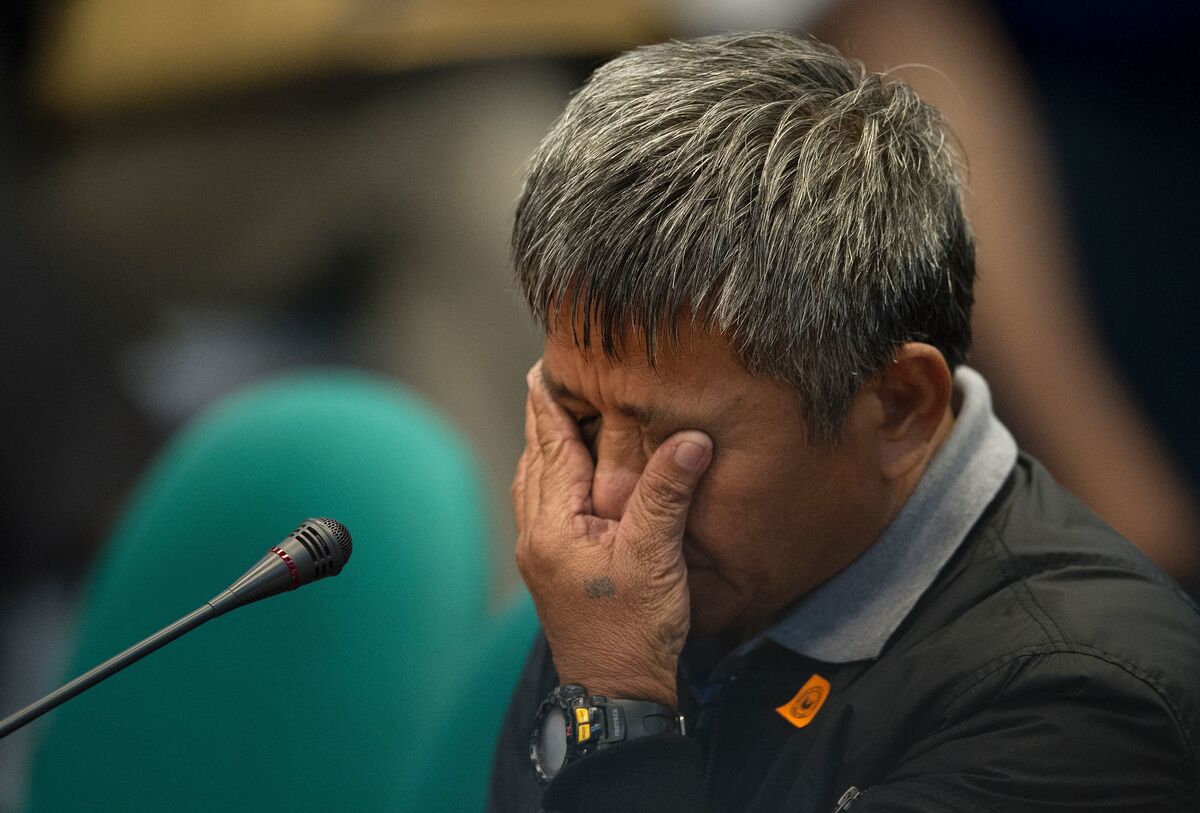 The man testifying Thursday, Edgar Matobato, says he was a member of a death squad and that he killed about 50 people. He says the killings ran from 1988 to 2013.

"Our job was to kill criminals like drug pushers, rapists, snatchers," he said, according to Reuters. "They were killed like chickens."

He said some bodies were tossed in the sea, cut up and concealed in a quarry or — in one case — fed to a crocodile, Reuters reports. Matobato said Duterte had personally ordered multiple executions, and in the case of one justice department employee, personally "finished him off" by firing an Uzi.

Martin Andanar, the president's communications secretary, said that a human rights commission "already conducted an investigation years ago, when the president was still a mayor, and charges were not filed," CNN reports.

Here are a few of the other incendiary accusations, and the responses:

Duterte himself has not commented on the testimony, the AP says.

A controversial, but popular, war on drugs

Again, these allegations about death squads in Davao City come during a fierce debate over Rodrigo Duterte's violent crackdown on drug dealers and users.

The Senate inquiry is led by Sen. Leila de Lima, a fierce critic of Duterte. She's joined by several international organizations, including the U.N. and human rights watchdogs, in criticizing the wave of extrajudicial killings.

July: Under A Hard-Line President, Dozens Of Drug Suspects Killed In Philippines

But a violent crackdown on drug dealers was Duterte's central campaign promise — and he was elected by a wide margin.

As we've reported, he campaigned by pledging to kill 100,000 criminals, vowing to kill corrupt cops and encouraging everyday citizens to shoot drug dealers:

"He emphasized his message in his final campaign speech.

" 'Forget the laws on human rights. If I make it to the presidential palace, I will do just what I did as mayor. You drug pushers, hold-up men and do-nothings ... I'll kill you,' he said, as The Guardian reported."

Since he took office, there have been deadly consequences for people accused of drug dealing or corruption.

And as Michael reported in July, the killings aren't unwelcome to all Filipinos.

Some citizens see a culture of impunity that Duterte is striking against, he reports:

"In Tondo, a notorious slum near Manila Bay ... methamphetamine is a major problem.

"It's a problem in every household, said Tondo resident Emily Reyes. She's 39 years old, and has lived here almost her entire life.

"Reyes said she didn't vote for Duterte in the May election, but said she's become a supporter since then.

"Things in her neighborhood have already gotten better, she said. Some dealers have already given themselves up, apparently because they fear they will be killed. And she's not worried about innocent people getting killed by mistake.

" 'Everyone knows who the drug dealers are,' she said. 'There won't be any mistaken identity.' "

In the 2 1/2 months since Duterte took office, hundreds of thousands of dealers and users have turned themselves in to authorities, hoping to avoid the violent crackdown if they confess.