Accessibility links
Department Of Defense Investigating U.S.-Led Coalition Airstrike In Syria : The Two-Way The attack was halted after Russia told coalition forces that dozens of regime soldiers had been killed. U.S. officials say the strike, which came during a cease-fire, was aimed at ISIS militants. 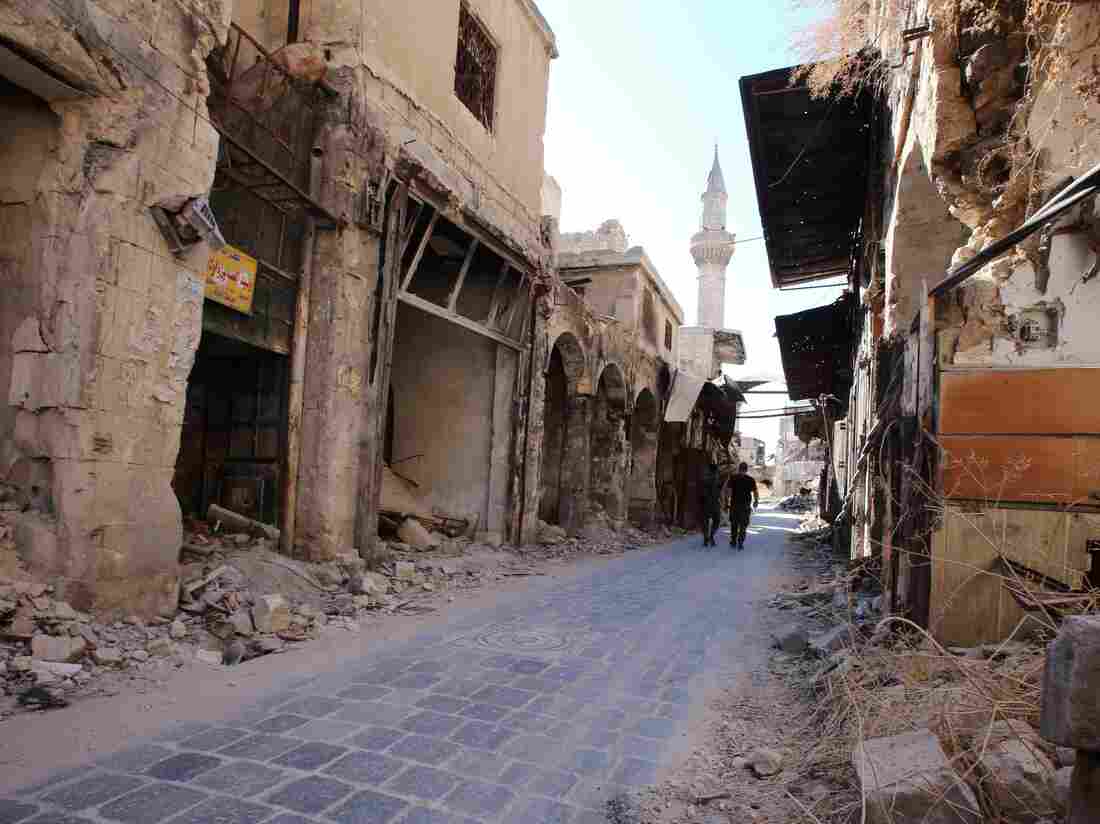 Syrian government soldiers walk in the damaged government-held side of Aleppo on Sept. 16. Initially, U.N. officials had observed calm in war-ravaged Aleppo during the recent cease-fire, but Saturday's violence in the country's eastern regions spells ill news for the truce. Youssef Karwashan/AFP/Getty Images hide caption 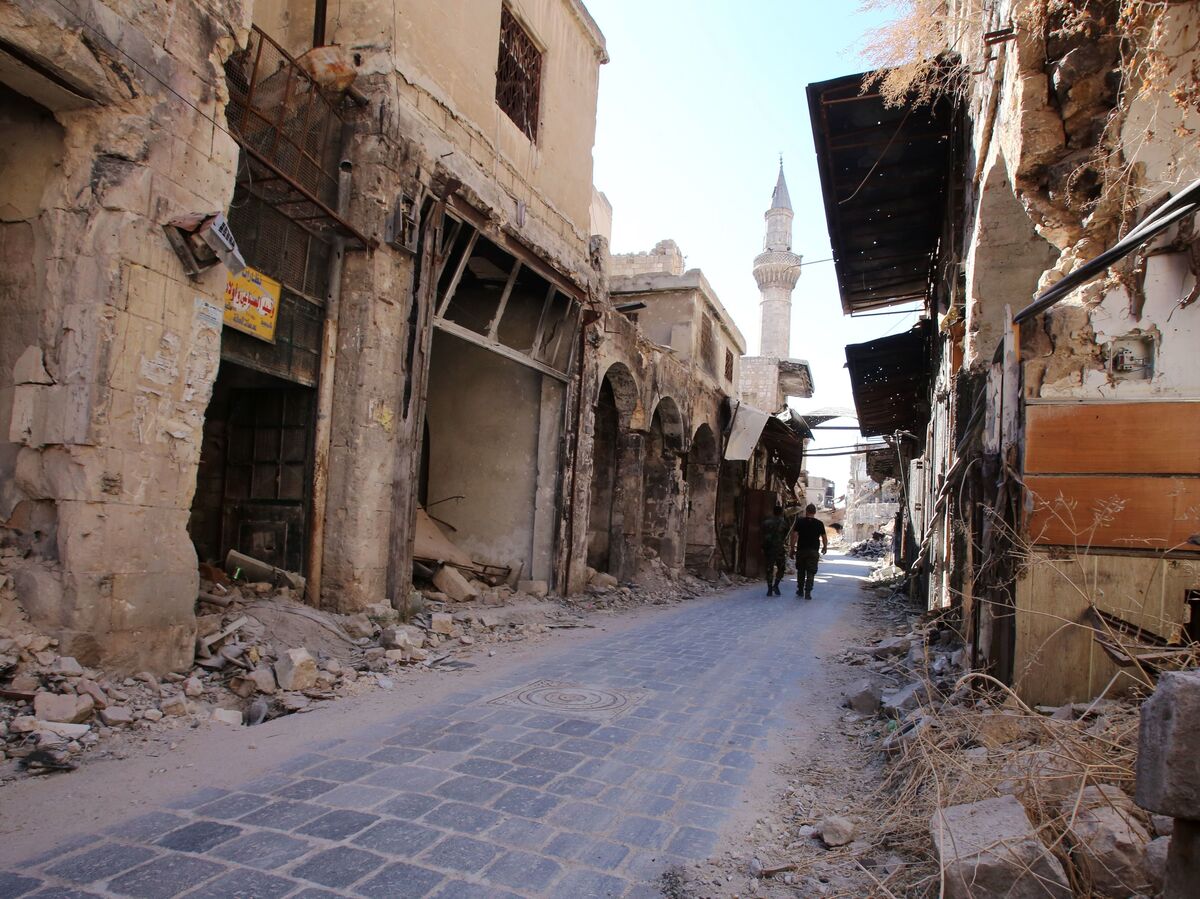 Syrian government soldiers walk in the damaged government-held side of Aleppo on Sept. 16. Initially, U.N. officials had observed calm in war-ravaged Aleppo during the recent cease-fire, but Saturday's violence in the country's eastern regions spells ill news for the truce.

"The coalition airstrike was halted immediately when coalition officials were informed by Russian officials that it was possible the personnel and vehicles targeted were part of the Syrian military," U.S. Central Command announced in a statement.

Russian Defense Ministry spokesman Maj. Gen. Igor Konashenkov says he has been informed by Syrian authorities that at least 62 soldiers were killed and more than 100 were wounded in the attack in Deir al-Zour, according to The Associated Press. The news service notes that, if confirmed, the casualties would mark the first time the U.S. has directly struck Syrian government forces during the country's long-running civil war.

Russia called for an emergency meeting of the United Nations Security Council, which convened Saturday evening to discuss the air raid.

Yet significant drama played out outside the meeting, as both Samantha Power, the U.S. ambassador to the U.N., and Russian diplomat Vitaly Churkin delivered dueling statements to the press. Power said the U.S. "regrets" the loss of life, promising an investigation into the attack. Yet Power also dismissed Russia's request for this meeting as "a stunt replete with moralism and grandstanding." Churkin, for his part, cast doubt on the American claim that the airstrike was accidental.

"While we are still trying to determine all the facts, if we mistakenly struck a Syrian military position we regret doing so, especially the loss of lives," Pentagon Press Secretary Peter Cook said in an emailed statement to Reuters, adding that Russian officials had not voiced concerns earlier on Saturday when informed that coalition air forces would be operating in the strike region.

The tension comes just over a week after a cease-fire in Syria had been announced by the two countries — and fewer than six days since that cease-fire went into effect. The agreement had been brokered by Russia, which supports Syrian President Bashar Assad's regime, and the U.S., which supports the opposition forces.

Up to this point, that cease-fire had shown mixed results. Fighting had "declined substantially" since the start of the truce and even battle-ravaged Aleppo had "dramatically improved" with the onset of tenuous calm, according to Staffan de Mistura, the U.N. special envoy for Syria. Still, as NPR's Merrit Kennedy reported, humanitarian efforts to deliver aid to besieged areas had stalled.

"The bad news is that we are not using this window of opportunity so far to reach all of these places with humanitarian assistance," Jan Egeland, adviser to the special envoy, said at a press briefing Thursday.

Saturday's violence presents another threat to the stability of the cease-fire. Though U.S. military officials say they had informed their Russian counterparts of plans for attack, adding that "coalition forces would not intentionally strike a known Syrian military unit," Russian Defense Ministry spokesman Konashenkov laid blame for the deaths squarely with the U.S.

Even if the U.S. attack on Syrian forces was an error, Konashenkov said, it was a result of "stubborn reluctance by the American side to coordinate its action against terrorist groups in Syria with Russia."

James Longman of the BBC adds: "Russia has said militants from IS took the opportunity [of the strike on Syrian military] to launch an offensive immediately afterwards."

"The coalition will review this strike and the circumstances surrounding it to see if any lessons can be learned," U.S. Central Command said in its statement.