Accessibility links
After Fatal Police Shooting, Protest Erupts In Charlotte, N.C. : The Two-Way Police say that Keith Lamont Scott was carrying a gun when an officer shot and killed him; his family says he was unarmed. Overnight protests shut down I-85, but the interstate has now been reopened. 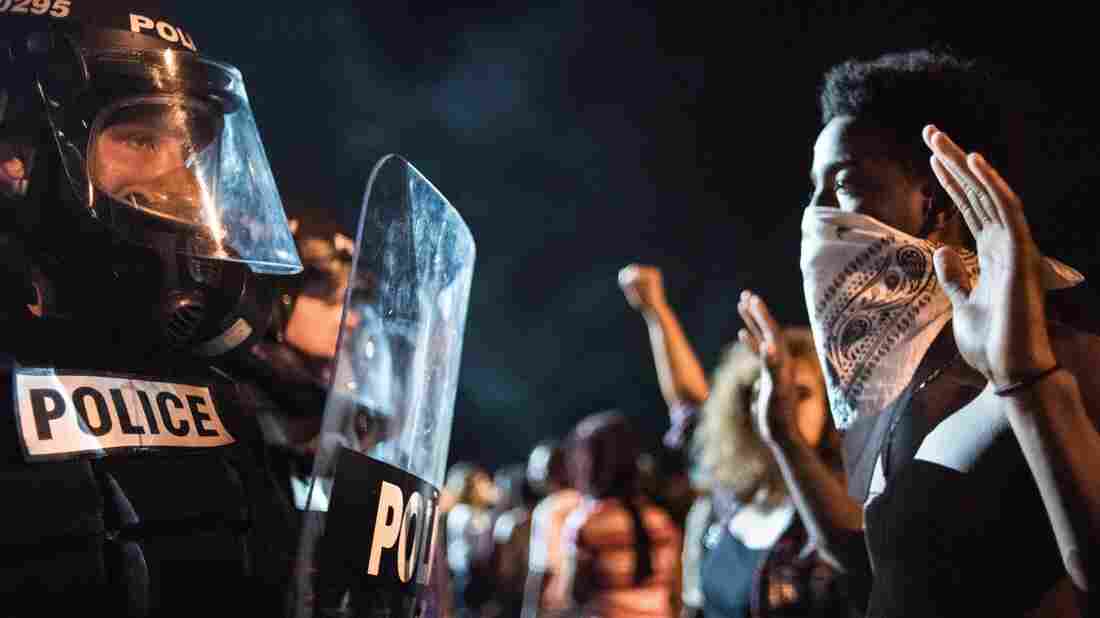 Police officers face off with protesters on Interstate 85 in Charlotte, N.C., during demonstrations following the death of a man shot by a police officer on Tuesday. Sean Rayford/Getty Images hide caption 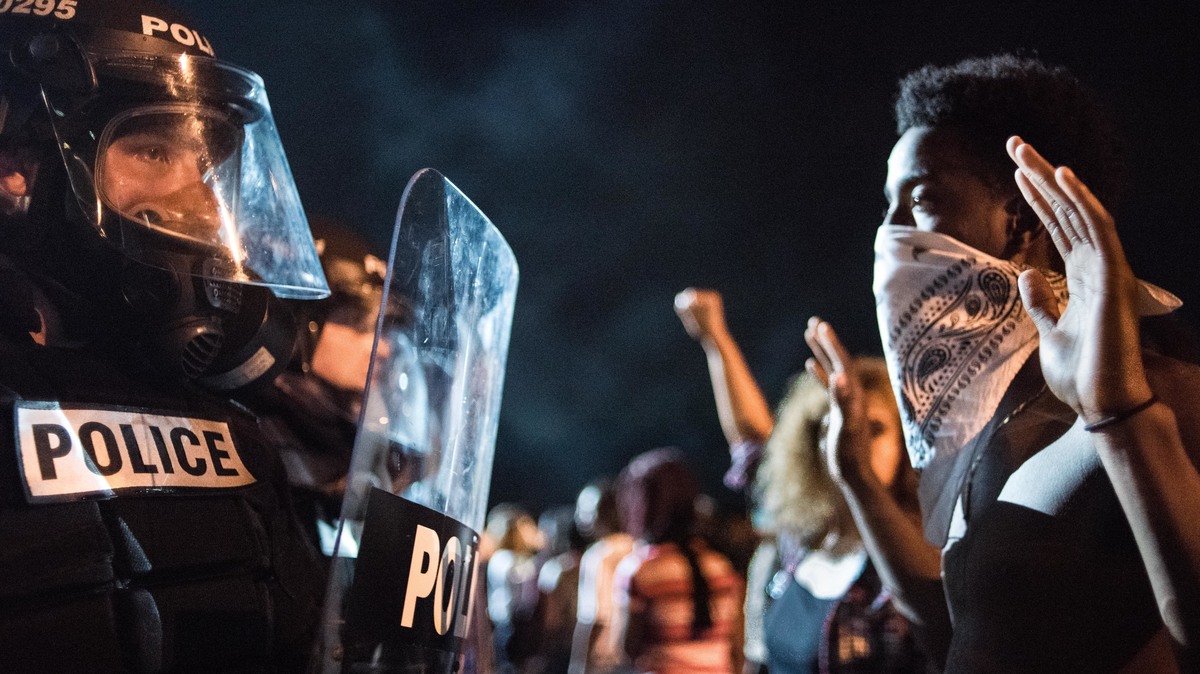 Police officers face off with protesters on Interstate 85 in Charlotte, N.C., during demonstrations following the death of a man shot by a police officer on Tuesday.

The police shooting of a man in Charlotte, N.C., sparked overnight protests and unrest. Protesters threw rocks at police, injuring 16 officers, while police wearing riot gear fired tear gas into the crowds. At one point, a major interstate was shut down as protesters set a fire and vandalized police cars.

The protests began Tuesday night after police shot and killed 43-year-old Keith Lamont Scott at an apartment complex near the University of North Carolina, Charlotte. Officers were at the complex to serve a warrant for a different man, The Associated Press reports, when they saw Scott in a car.

Police and protesters give different accounts of what happened next.

Police say he came out of the vehicle with a gun. At a press conference on Wednesday, Charlotte-Mecklenburg police Chief Kerr Putney said that officers gave the man multiple verbal warnings to drop his weapon before he was shot.

Putney says a handgun was recovered on the scene, and that witnesses corroborated the officer's accounts.

The police chief says he does not know if Scott pointed the weapon at the officers, or whether the gun was loaded. He also says the officer who shot Scott was not wearing a bodycam, but that other video footage of the incident is being reviewed.

"The daughter of Keith Lamont Scott says that her father did not have a gun, that he was not armed, and that he was sitting in the car reading a book waiting on his son to get off a bus from school," she says.

Officer Brentley Vinson shot Scott, who later died in the hospital, the AP reports. Vinson, who has been with the department for two years, is on administrative leave while police investigate the shooting — standard department procedure, the wire service says.

Both Vinson and Scott are black.

After the shooting, the woman who says she is Scott's daughter streamed live on Facebook for an hour, as Nick de la Canal of member station WFAE reports. She cursed at officers at the scene, saying her father was disabled and didn't have a gun. "Y'all m***********s running for him because he's black," she said.

The video went viral and protesters began to gather at the area, de la Canal says.

Glenn wasn't present for the start of the protest but says that, according to witnesses, it began peacefully.

De la Canal has this account of what happened next:

"[A]s the night wore on, more protesters arrived, and the mood turned more aggressive. They forced the shutdown of Old Concord Road, right next to the rail tracks.

"Overhead, a police helicopter was swinging its search light over the crowd, which stretched all the way down the street.

"Just as the 11 o'clock freight train passed, protesters began throwing rocks and water bottles at police, and smashing in the windows of police cruisers, some so badly they had to be towed from the scene. Then, at once, police in riot gear, donned gas masks and helmets, and began shooting rounds of tear gas into the crowd." 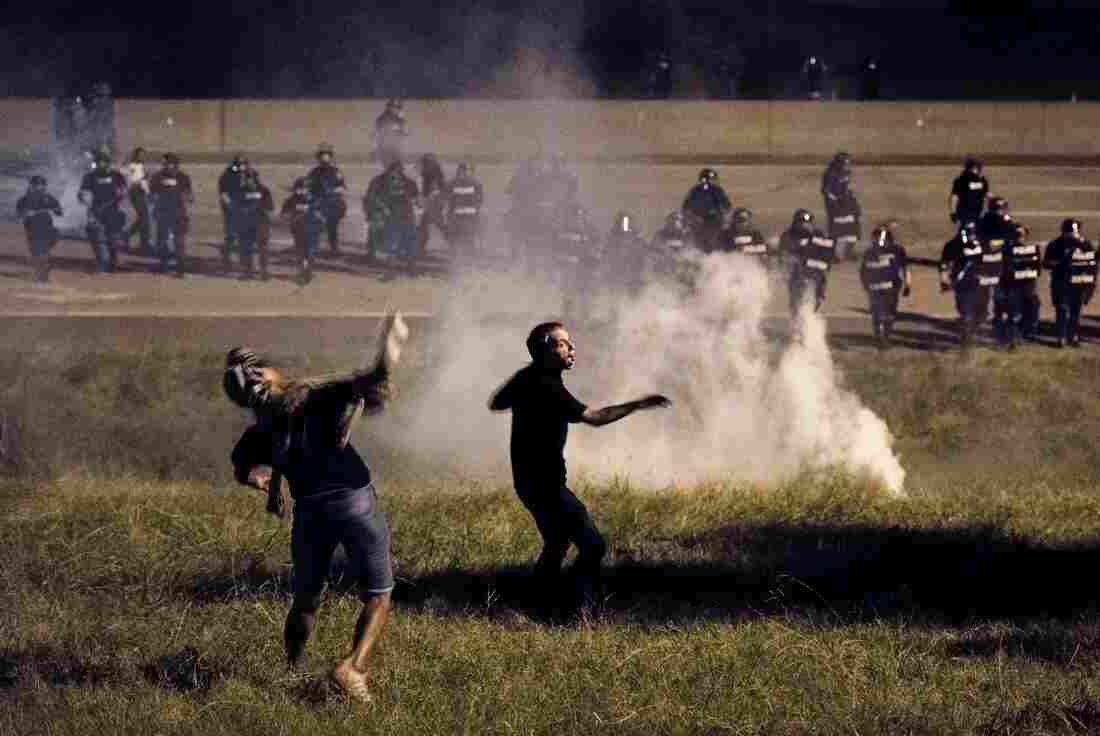 Protesters throw objects at police officers on I-85 in Charlotte, N.C., in the early hours of Wednesday morning. Sean Rayford/Getty Images hide caption 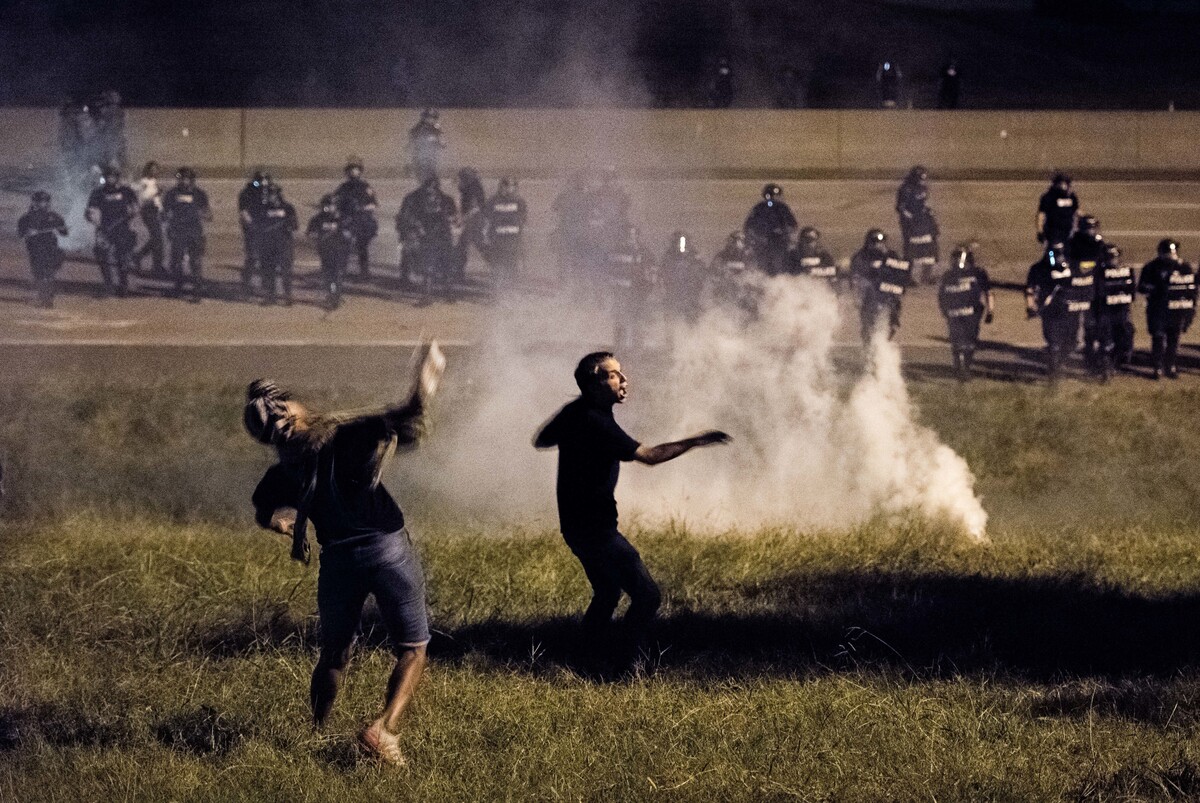 Protesters throw objects at police officers on I-85 in Charlotte, N.C., in the early hours of Wednesday morning.

De la Canal reports that protesters wrapped T-shirts around their faces; some knelt and raised their arms as they faced off with the officers. He continues:

"As police fired more rounds of tear gas, protesters began grabbing the canisters and throwing them back. And a new wave of rocks and bricks were hurled at the officers, and a cloud of gas rose over the intersection, glowing green in the light of the traffic signal.

"By midnight, the protesters had moved on. They set off down the ramp to W.T. Harris Blvd., where they stopped traffic and smashed another police cruiser. They banged on the hood of the car in time to chants of 'no justice, no peace.'

"And over the course of the night, they moved to I-85 and blocked traffic there and started a bonfire in the middle of the highway."

In the early hours of Wednesday, a stretch of the interstate was closed in both directions because of the protests, but it had reopened by rush hour.

At the press conference Wednesday, the police chief said about 16 officers were injured over the course of the night, none of them seriously.

One person was arrested as a result of the protests, Putney said.

The Associated Press says that one TV news crew withdrew from covering the protests "after demonstrators began rocking their remote van." The mayor of Charlotte, Jennifer Roberts, "appealed for calm and tweeted that 'the community deserves answers,' " the AP says.

By Wednesday morning, the wire service reports, the streets were quiet — broken glass and rocks the only evidence of the night's unrest.

U.S. Attorney General Loretta Lynch said Wednesday that the Justice Department is assessing the incident and is in regular contact with local authorities.

"I urge those demonstrating in Charlotte to remain peaceful in their expressions of protest and concern," she said.

Glenn tells NPR there was tension recently in Charlotte over a 2013 police shooting of a black man, Jonathan Ferrell. Ferrell was unarmed when he was killed by a white officer; the case went to trial last year.

"That trial ended in a hung jury and when that verdict came down there were protests in the streets immediately," Glenn says. "Police and the protesters did not clash at that time, but the city was greatly divided."

Tuesday night's shooting and protests in North Carolina come just days after a police officer in Tulsa, Okla., shot and killed an unarmed black man. That shooting happened Friday, and video was released on Monday.

Tulsa Police Chief Chuck Jordan said the video, which shows Terence Crutcher walking to his car with his hands over his head before the officer shot him, was "very disturbing." The killing is being investigated by police and by the Justice Department.