Accessibility links
Charlotte Shooting Sparks Second Night Of Protests : The Two-Way More tear gas-shrouded demonstrations followed the fatal shooting of a black man by police on Tuesday. A civilian was shot at the protests and is now on life support.

N.C. Governor Declares State Of Emergency After 2nd Night Of Unrest In Charlotte

N.C. Governor Declares State Of Emergency After 2nd Night Of Unrest In Charlotte 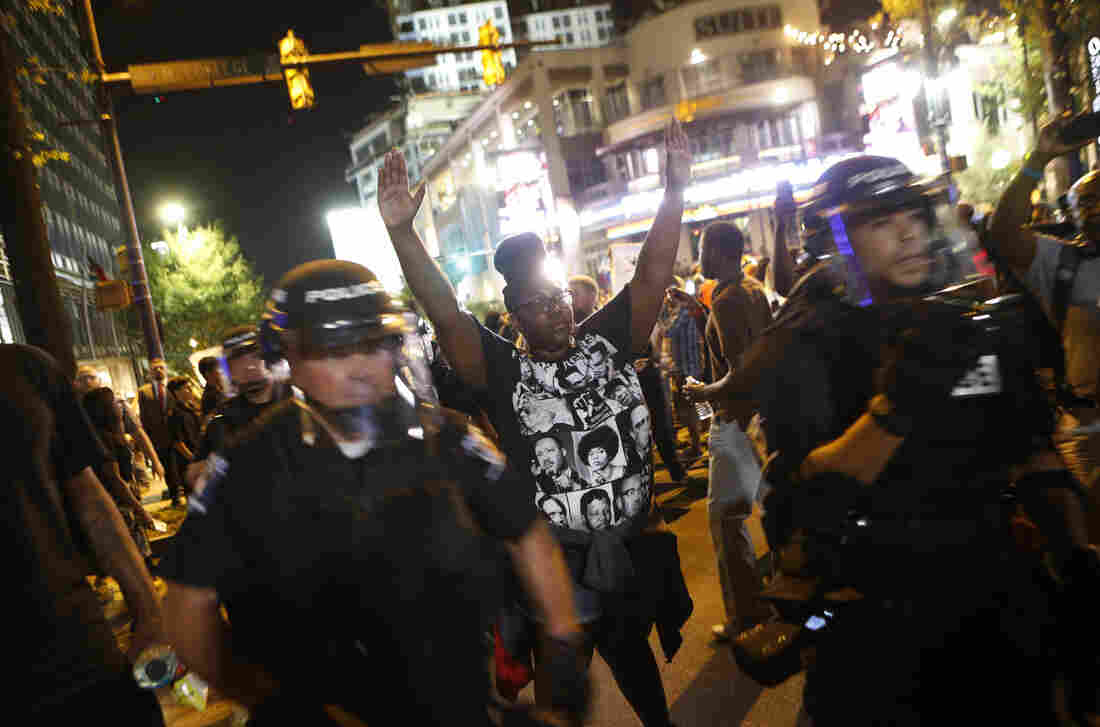 Protesters march Wednesday to protest the Tuesday shooting death of Keith Lamont Scott in Charlotte, N.C. Scott, who was black, was shot and killed by police officers, who say Scott was holding a gun and ignored instructions to drop it. Relatives and neighbors say he was holding a book. Brian Blanco/Getty Images hide caption 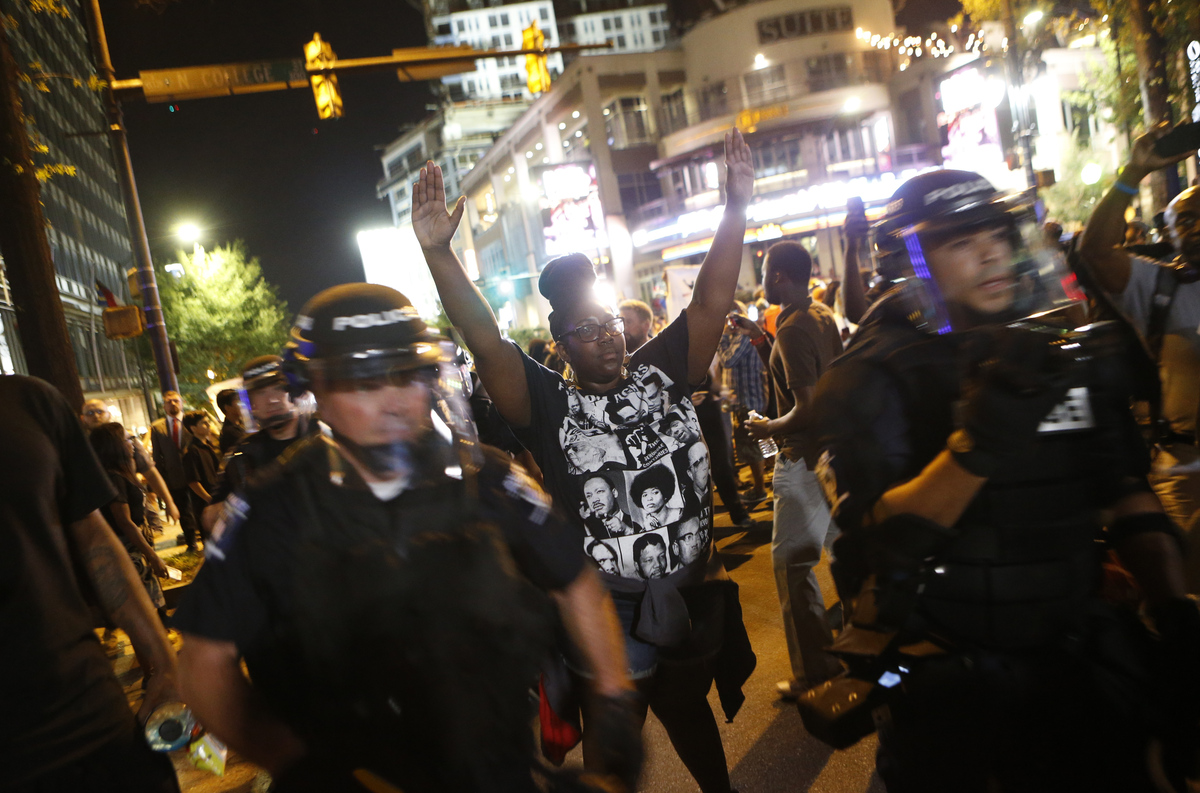 Protesters march Wednesday to protest the Tuesday shooting death of Keith Lamont Scott in Charlotte, N.C. Scott, who was black, was shot and killed by police officers, who say Scott was holding a gun and ignored instructions to drop it. Relatives and neighbors say he was holding a book.

On Wednesday, for a second straight evening, demonstrators in Charlotte, N.C., protested the fatal shooting of a black man by police. Demonstrators threw objects at police and smashed car windows; officers in riot gear tried to disperse the protesters with tear gas and concussion grenades.

And there was a second shooting — a civilian at the protests who had to be evacuated from the scene in an armored vehicle. Early on Thursday, city officials said the victim was shot by another civilian. At a press conference later in the day, Charlotte's police chief said that the department is investigating allegations that the man was shot by a police officer.

The city originally said the victim died, but now says he is on life support. 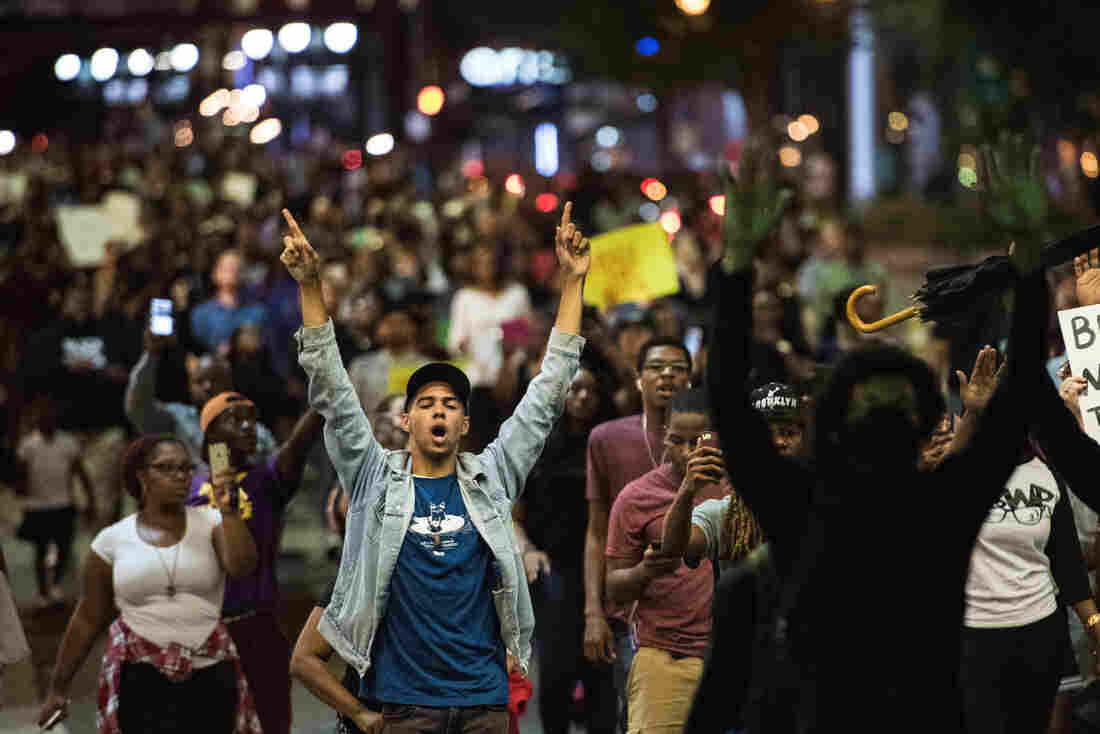 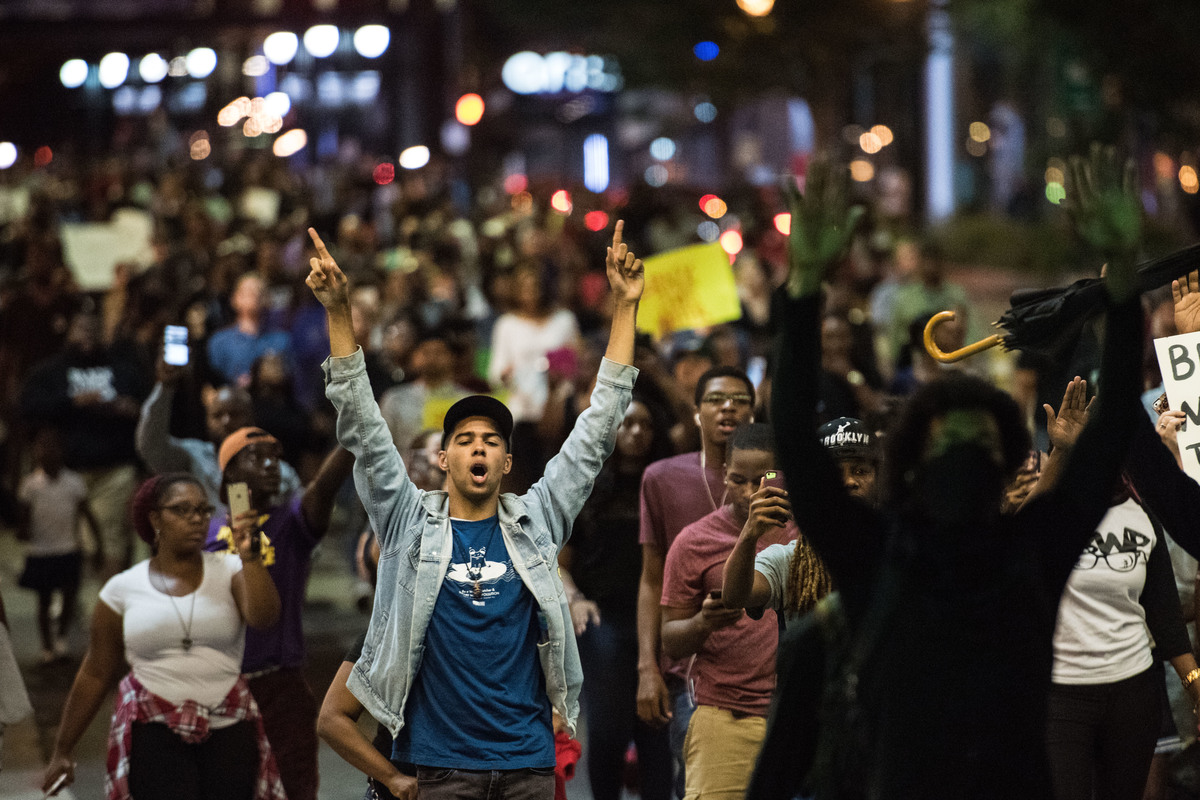 Demonstrators fill a downtown city street during protests on Wednesday night in Charlotte, NC. The protests began the previous night following the fatal shooting of 43-year-old Keith Lamont Scott at an apartment complex near UNC Charlotte.

North Carolina Gov. Pat McCrory has declared a state of emergency in Charlotte, and says state police have been assisting the city's officers. He is also deploying the National Guard to assist in the city.

The demonstrators on Tuesday and Wednesday night were protesting the death of Keith Lamont Scott. As the Two-Way reported yesterday, there are two different narratives of Scott's shooting. Police say Scott emerged from his vehicle with a gun, and ignored multiple commands to drop it. Neighbors and relatives said Scott was holding a book.

Video footage of the shooting is being reviewed, authorities say. Protesters have called for it to be released to the public, but the city's mayor and police chief say it won't be released in the immediate future.

The shooting led to protests in the city Tuesday night that temporarily blocked I-85, damaged police cars and injured 16 officers.

"This latest round of protests started peacefully, says 31-year-old Eddie Thomas: 'It was all cool, the bike cops were cool with it. Until riot cops came out. And once the riot cops came out, within 5 minutes you had a young man on the ground bleeding.'

"Thomas is a public defender here in Charlotte. He came, he said, to help keep the peace between protesters and police. But the peace was not kept.

" 'You know, I saw that young man on the ground. I saw his eyes roll in the back of his head. I'll never get that image out of my mind, man.' "

"Thomas was talking about a still-unidentified man who was shot and critically injured."

Just as there are two stories about what happened when Scott was shot, there are also multiple narratives about the shooting of this protester. City officials said the bullet was fired by a civilian, but protesters alleged it was a police officer who shot the man. Charlotte-Mecklenburg Police Chief Kerr Putney said police are "investigating that to find the truth, the absolute truth, as best the evidence can show us." 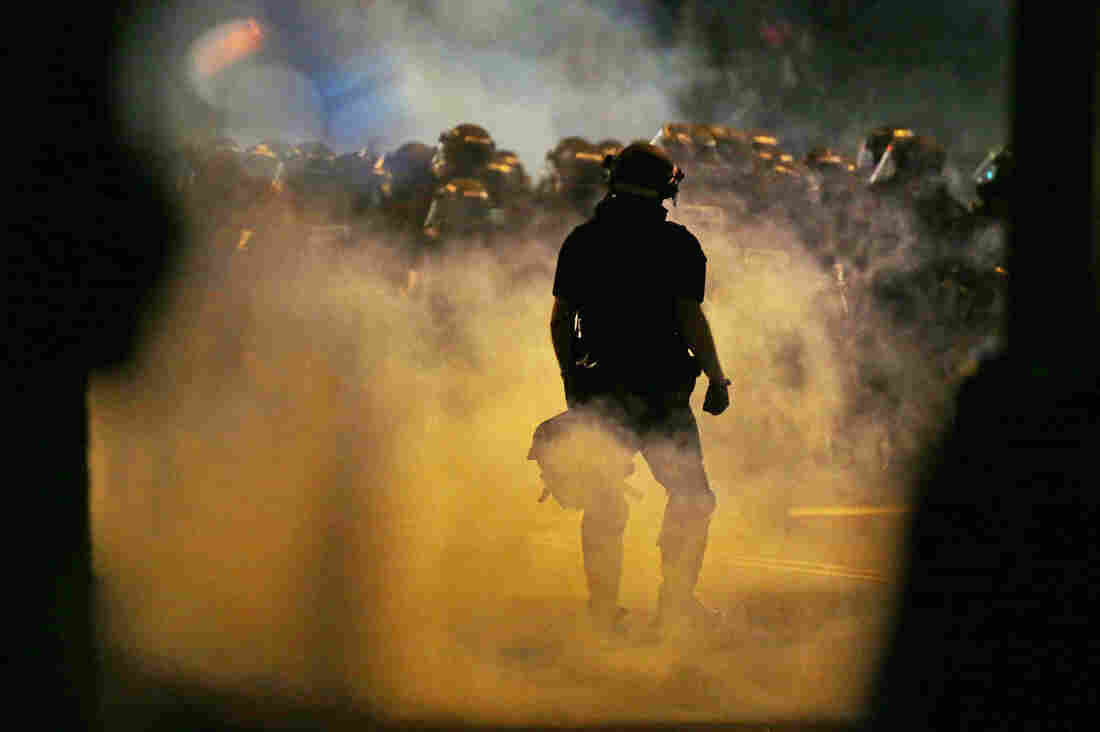 News of the shooting at the protest quickly spread among the hundreds of demonstrators, Bullock reports, overtaking anger about Scott's death as protesters blamed police for the newest shooting.

"Some protesters threw bottles of water, trash cans, even plants they ripped from the ground at police," Bullock reports.

WFAE: A Conversation With Some Of Charlotte's Nonviolent Protesters

Nine civilians sought medical treatment after the protests, Charlotte-Mecklenburg Police Chief Kerr Putney said at a press conference Thursday. More than 40 people were arrested at the protests, for charges including failure to disperse, assault and breaking and entering.

Those protests were held in uptown Charlotte, a business and entertainment district home to upscale hotels and high-rise offices. At the same time that there was unrest on the streets, there was a peaceful gathering calling for unity at a church a few blocks away, Boraks reports.

By Thursday morning, The Associated Press reports, the protests all wound down: "Hotel employees and security guards immediately started cleaning up broken glass."

Several companies based in the area have told their employees to stay home Thursday.

Putney says he doesn't plan to set a curfew for the city Thursday night, but that the declaration of a state of emergency gives him the ability to do that if necessary.

Also on Thursday, Attorney General Loretta Lynch announced that four members of the Department of Justice's mediation service will be heading to Charlotte.

Black Men May Have Cause To Run From Police, Massachusetts High Court Says