Accessibility links
Computer Scientists Solve Mystery Of The Ein Gedi Scroll By 'Virtual Unwrapping' : The Two-Way Researchers used a new kind of analysis to make a virtual image of a crumbling ancient scroll from Israel. Biblical scholars were able to read the re-created text, which is from Leviticus. 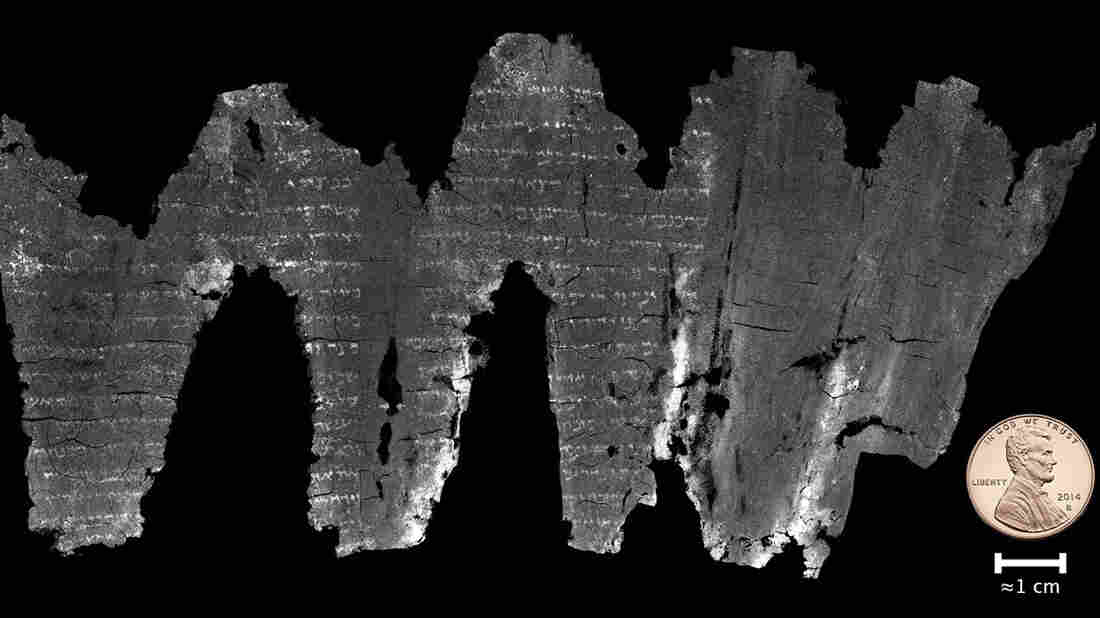 A virtually unwrapped image of writing on the inside of the partially destroyed Ein Gedi Scroll. Science Advances hide caption 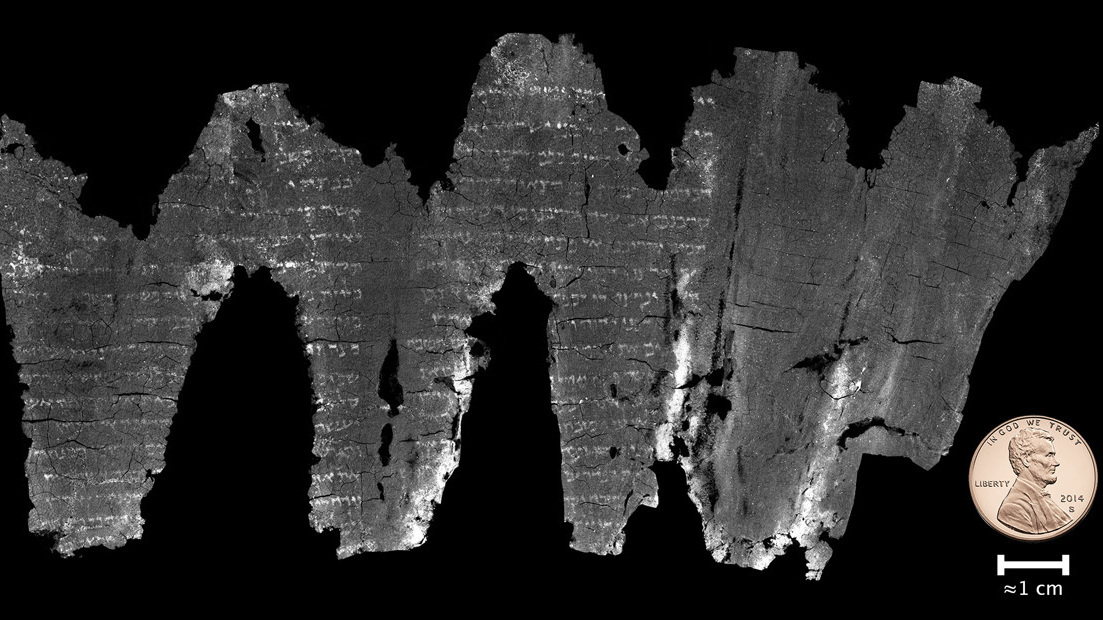 A virtually unwrapped image of writing on the inside of the partially destroyed Ein Gedi Scroll.

In 1970, archaeologists excavating the site of an ancient synagogue in Israel dug up a cylindrical lump of charcoal that looked like the remains of a scroll.

The animal-skin document was badly burned and battered. It was so delicate, just touching its surface sent pieces flaking off. To attempt to read it by unwrapping the layers would be to destroy the artifact forever. For curious scholars hoping to know what was written inside, the so-called Ein Gedi Scroll was a hopeless enigma.

Using specialized X-ray imaging, a team of computer scientists from the University of Kentucky created a picture of the writing inside the scroll without unwrapping it, or even touching the charred document much at all. Their findings are described in a paper published Wednesday in the journal Science Advances.

Radiocarbon dating suggests the document was written in the third or fourth century, after the Dead Sea Scrolls and before biblical fragments found in Egypt. The writing, in Hebrew, reveals that the Ein Gedi Scroll is a section of Leviticus. It is the oldest Old Testament scroll ever found in the holy ark of a synagogue, according to the study authors.

A section of Hebrew from the Ein Gedi Scroll. These lines appear in the right-most column of reconstructed text. Science Advances hide caption

First, the team scanned the charcoal lump with an X-ray technique called microcomputed tomography. It's noninvasive — the scanning equipment doesn't touch the scroll — but the team writes that even the most delicate imaging technique "necessitates physical handling of the friable material." So, the curators had to be careful.

Virtually Anyone Can See The Dead Sea Scrolls Now

"The curators do all the work in handling the objects, and they are experts," explained lead author and computer scientist William Seales in an open reddit forum about the findings. The curators were from the Israel Antiquities Authority, where the scroll lives.

Once the first step was finished, the scroll's role in its own deciphering was over, and it went back into protective storage.

"I've been amazed at how careful and protective they are at moving things around and handling them," Seales wrote on reddit. "But I'm convinced that this is one of the safest kinds of analysis you can do, short of 'doing nothing.' "

Next, the team analyzed the X-ray data to figure out where one layer of the rolled-up animal-skin scroll ended and the next one began. Like a smashed Ho Ho in cross-section, the layers were deformed and stretched into different thicknesses. The team wrote an algorithm that basically guessed what each layer would look like, and then compared the data with that guess to map out where the actual layers began and ended.

Left: A cross-section image of the scroll, showing white lines representing the rolled and deformed layers. Right: A reconstruction of one layer. Science Advances hide caption

They would keep tweaking the guess until it matched each part of each layer of the scroll, at which point they say "the surface detail, including cracks and ink evidence becomes visible."

The third step was to analyze that ink, looking for letters. To do that, they wrote software that looked at every point on each layer and assigned a "brightness" level. Brightness is a fickle thing — it's all about how something looks relative to what is around it — but in this case the team compared how densely each point on the manuscript reflected X-rays.

The denser the reflection, the brighter the point. When the team members mapped out each point as a pixel, they ended up with a 3-D image of the seemingly illuminated letters, written in what they speculate is some kind of metal-rich ink.

"It is possible to 'see' ink-based text ... while avoiding the need for physical handling," the authors wrote in an introductory post on reddit.

But the 3-D image of the text, still rolled up, was impossible to read. The letters were curved and stacked on top of each other in the model. For the final step of the analysis, the team turned the 3-D model into a 2-D page by virtually flattening it out.

The final image shows columns of light Hebrew letters against a dark background. Some of the words have large cracks running through them. Some sections are missing or damaged. But enough is intact for scholars at the Hebrew University of Jerusalem to identify sections of the book of Leviticus. 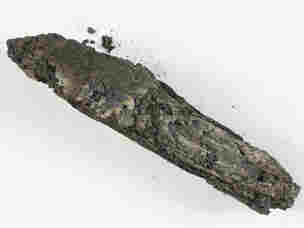 For those inclined to doubt the findings — after all, the scroll is unlikely to ever be unfurled for scholars to examine the text with their own eyes — the team says its method has the benefit of a clear "pipeline," so anyone can trace the algorithmic origin of each pixel in the final image. If a certain Hebrew letter looks strange, scholars can walk back each pixel to verify the contours of the letter.

Realistically, they write in the paper, "the traditional approach of removing a folio from its binding — or unrolling a scroll — and pressing it flat" to read it simply will not work on fragile manuscripts "that have been burned and crushed into lumps of disintegrating charcoal." Virtual X-ray reconstruction is the best technique available.

Because the computer science work was funded by public money through the National Science Foundation, the complete software will be released to the public next year as part of the grant agreement, co-author Seth Parker explained on reddit.

Seales and Parker hope the new imaging method will be similarly helpful for deciphering other artifacts, including scrolls damaged in Pompeii and Herculaneum. Asked by one reddit user how many other documents might benefit from this approach, Seales wrote that he did not know, but "Almost every library/museum has damaged things."

In a previous version of this story, William Seales' name was incorrectly spelled as Searles.