Accessibility links
#NPRreads: Get Below The Surface This Weekend With These 3 Stories : The Two-Way Correspondents, editors and producers from NPR's newsroom share the pieces that have kept them reading, using the #NPRreads hashtag.

#NPRreads: Get Below The Surface This Weekend With These 3 Stories

#NPRreads: Get Below The Surface This Weekend With These 3 Stories 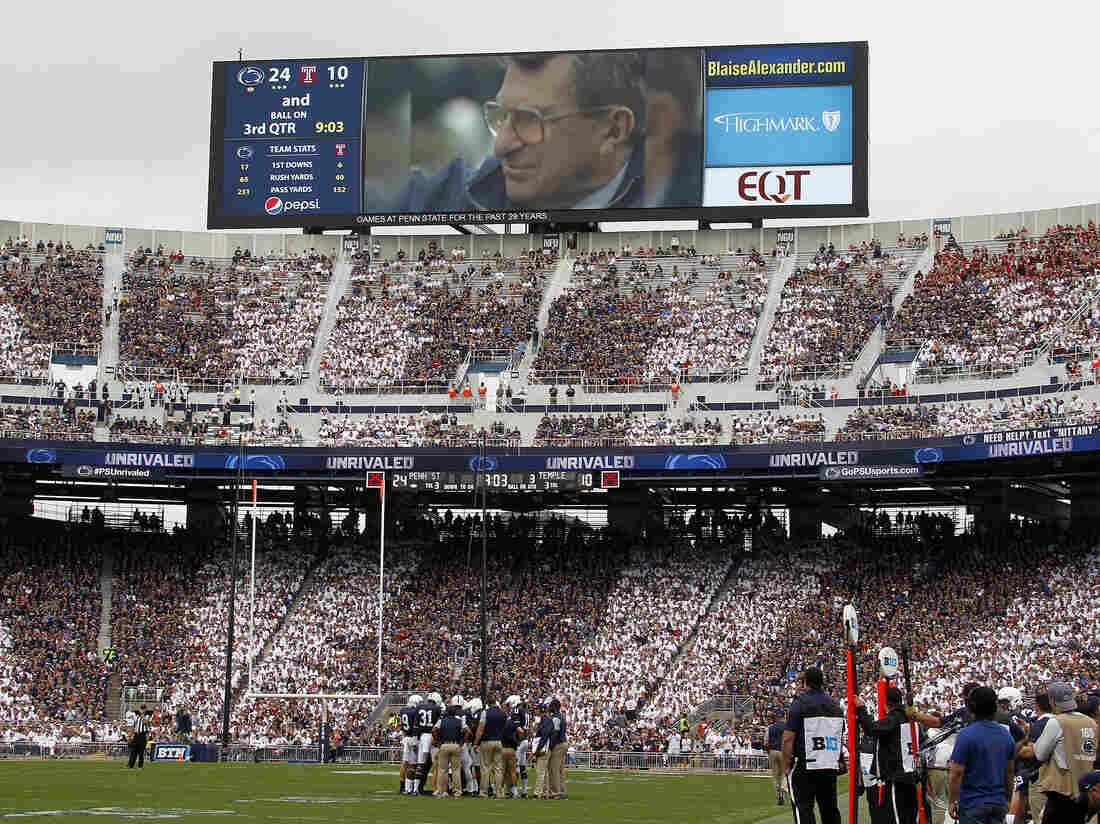 Joe Paterno is seen on the scoreboard during a time out against the Temple Owls during the game on September 17, 2016 at Beaver Stadium in State College, Penn. Justin K. Aller/Getty Images hide caption 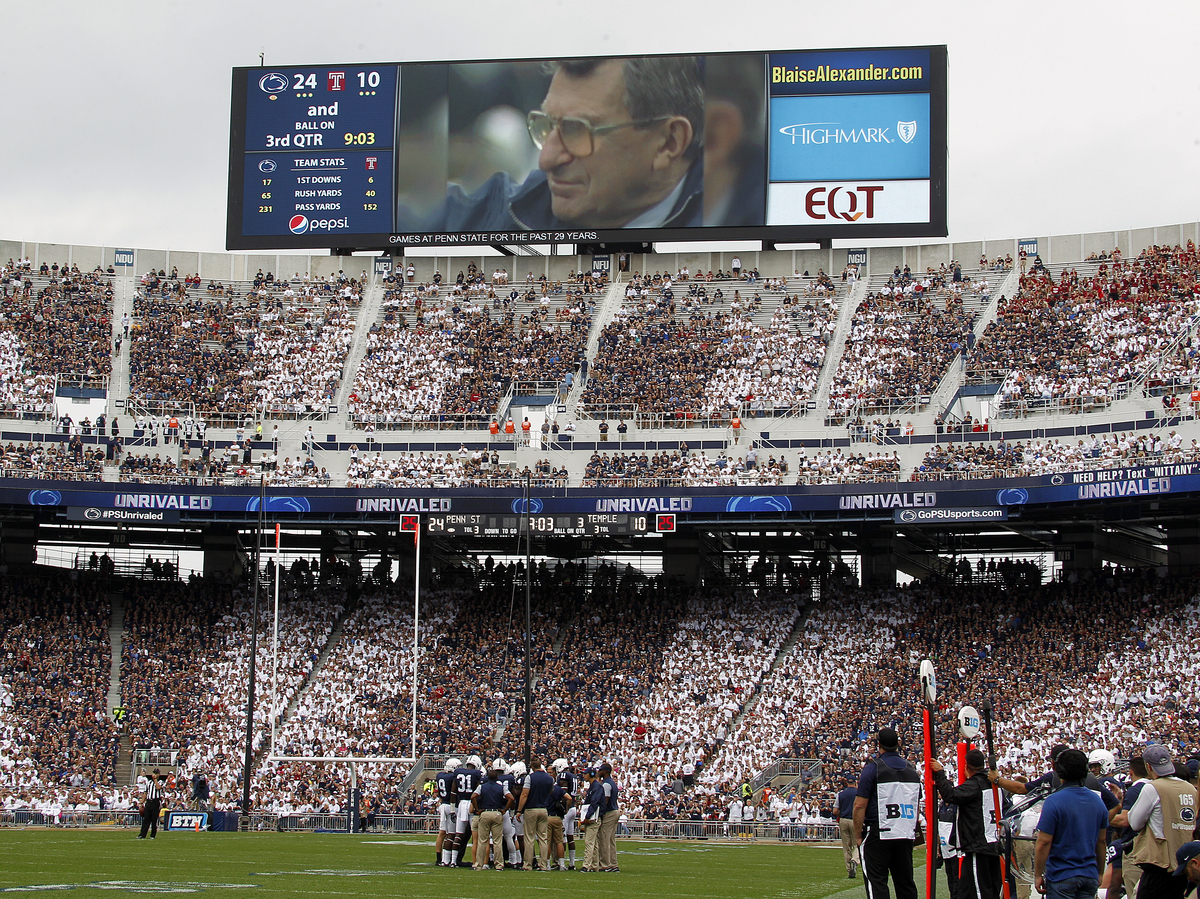 Joe Paterno is seen on the scoreboard during a time out against the Temple Owls during the game on September 17, 2016 at Beaver Stadium in State College, Penn.

#NPRreads is a weekly feature on Twitter and The Two-Way. The premise is simple: Correspondents, editors and producers from our newsroom share the pieces that have kept them reading, using the #NPRreads hashtag. Each weekend, we highlight some of the best stories.

Soon after helping his Texas A&M Aggies knock off the top team in the country, Thomas Johnson, a breakout wide receiver, gave up football for reasons we may never truly know.

What led to his decision and the consequences that followed, irreparably affected numerous lives and led to the deaths of two people: Dave Stevens, allegedly at the hands of Johnson via a machete, and Patti Stevens, Dave's widow, who took her own life shortly after her husband's death.

Johnson now awaits mental health treatment in order to stand trial, but this ESPN story focuses on the signs both seen and missed in Johnson as he grew up, became a football sensation, departed the sport and university community, and eventual descent toward the morning of Oct. 12, 2015.

The issue of mental health and the consideration of those who must deal with it — family members, law enforcement, and ourselves — is at the heart of this piece. And lest we forget the Stevens family and their lives, the Dallas Morning News has deftly reported this story as well. I suggest reading their coverage on this ultimately tragic saga as well.

"This is the story of two terrible crimes. Here’s the first." https://t.co/U2kx0S3euJ blazing @DanielGAlarcon #nprreads

You must read this profile about California gang culture, published in California Sunday Magazine and written by novelist and radio storyteller and reporter and cultural critic Daniel Alarcon. The Ballad of Rocky Rontal is the story of a young man from California caught in an situation that could not end well.

The great thing about this piece is that Daniel Alarcón doesn't give too much away too fast, and I'll try not to ruin that here. This is what you need to know about the subject of the piece, Rocky Rontal: he was never, he says, allowed to have a childhood.

Rontal was born and raised in Stockton, California. His father was a violent man and he drank. Rocky tried to protect his mother from his father, until the man beat his 10-year-old son so badly that his mother kicked her husband out of the house. By the time he was 13, his older brothers were both in juvenile detention and Rocky was the man of the house. He started stealing, first fruit, then cars.

Rocky ended up at a state reform school, and then in juvenile detention for breaking another boy's ribs in a fight.

He was 15 when an adult first called him a gang member.

From there, things go unsurprisingly badly for Rocky. The subtitle of the piece is "How do we forgive the unforgiveable?" I'll leave you with the sentence that, about halfway through, made my stomach turn in anticipation and dread:

"This is the story of two terrible crimes. Here's the first."

This take on why it was abhorrent that Penn St. celebrated Joe Paterno this weekend will have you in tears #NPRreads https://t.co/SS4u7ySYo7

Believe me, I completely understand college football fandom. Just check my Twitter feed on Saturdays in the fall if you don't believe me. But there are things far more important than football, and that was the issue Penn State faced last weekend. The school is just few years removed from and still trying to heal after the Jerry Sandusky scandal, where the school's former assistant coach was convicted of multiple counts of sexual abuse of young boys over the course of decades. Last Saturday, the school decided to honor the 50th anniversary of the late head coach Joe Paterno — who an independent investigator, former FBI director Louis Freeh, had found had concealed Sandusky's actions, as did court testimony; Paterno and his family maintained he did not.

But by honoring Paterno's legacy so soon — which, if judged by football wins and losses alone is good — the wounds left open the horrible scandal were not even addressed or seemingly considered. And it's impossible to remove the Sandusky scandal from Paterno's legacy. When the school newspaper editor wrote an editorial opposing the school's plans to honor Paterno, she got hate mail from alumni and fans calling her a "clueless treacherous traitor," and worse. "I hope God can forgive you for your actions, I sure the hell can't," one person wrote. Oh, the irony.

The Undefeated's Mike Wise has a must-read on why the seemingly tone-deaf move by the school is so damaging. He movingly writes of his own horrific experiences of being sexually abused by an uncle as a child and the shame and torment it caused him. "The people who stood to honor Paterno may have meant no harm. But to Sandusky's victims, to all victims of child sexual abuse, pining for Penn State's past is the opposite of love," Wise wrote.

Ultimately this decision was about far more than football, and in that, Penn State failed, Wise argues:

"It's not up to the Penn State community – the unaffected fan in the stadium's third row – to decide how Paterno's legacy should be treated. It's not up to his widow, Sue Paterno, who persuaded the university to have this weekend.

"It's up to the men who were molested. They get to decide."