Accessibility links
Police Shooting Of Unarmed Black Man Leads To Protests In San Diego Suburb : The Two-Way On Tuesday, an officer in El Cajon, Calif., shot and killed an unarmed black man. His sister had called the police to ask them to help her brother, who was acting erratically. 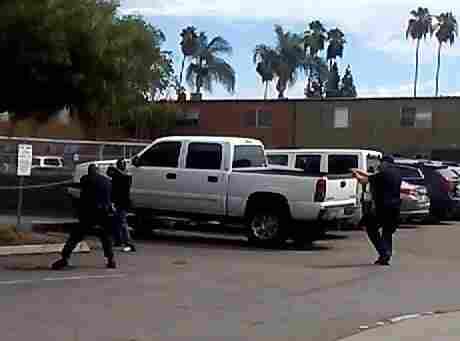 Police in El Cajon, Calif., provided this image, which they say is a still from a bystander's cellphone video of the shooting of an unarmed black man on Tuesday. Police say the man was pointing an object — which was not a weapon — at an officer. El Cajon Police Department hide caption

On Tuesday, a police officer in the San Diego suburb of El Cajon, Calif., shot and killed an unarmed black man, sparking protests in the area.

El Cajon police Chief Jeff Davis said Tuesday night that police were on the scene because the man's sister had called 911, reporting that her brother was "not acting like himself," Andrew Bowen of member station KPBS reports.

After police arrived on the scene, Davis said, the man drew an "object" from his pocket, "placed both hands together on it and extended it rapidly toward the officer, taking what appeared to be a shooting stance."

One officer on the scene discharged a Taser. Another officer — the one who "had the object pointed at him," Davis says — "simultaneously" fired a gun, shooting the man several times.

Police have not said what the object was, but they have confirmed it was not a weapon.

A bystander began streaming video on Facebook Live in the aftermath of the shooting, recording a distraught woman saying she was the one who called 911 seeking help for her mentally ill brother.

"I just called for help, and you came and killed him," she said. "Oh my God, you killed my brother. I called these people three times to help him.

"He's sick, he needs help," she said through tears. "I told you guys he's sick. You guys came and killed my brother."

Some witnesses said the man, whose name hasn't been released, had his hands in the air as he was shot, while police said he was pointing the unidentified object at the time.

Police in El Cajon do not wear body cameras, The Associated Press reports.

"Police do have a cellphone video of the incident, as well as footage from nearby cameras, but they say they're not making the videos public until they're no longer considered evidence in the investigation," Bowen says.

The police say the cellphone video was provided voluntarily.

After the shooting, dozens of people gathered in El Cajon for protests that the AP described as "angry but peaceful."