Accessibility links
Flight MH17 Was Shot Down By Missile Moved From Russia, Investigators Say : The Two-Way A Dutch-led team of international researchers found that a Buk missile shot down Flight MH17 in 2014. Evidence suggests the missile was brought from Russia and fired from rebel-held eastern Ukraine. 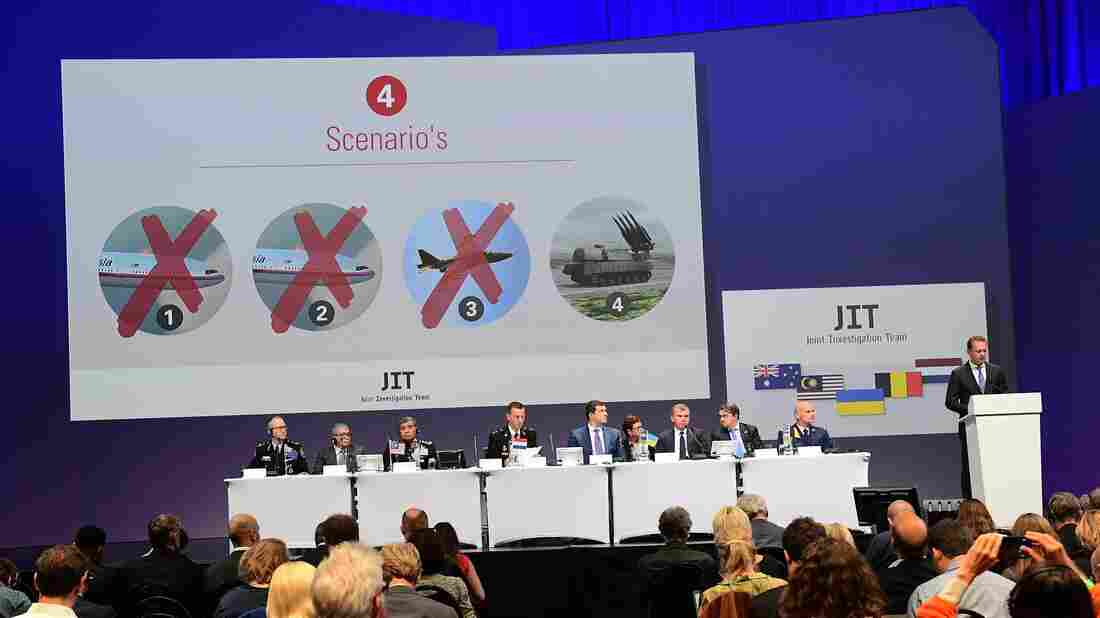 Members of a joint investigation team present the preliminary results of the criminal investigation into the downing of Malaysia Airlines Flight 17 in 2014. The investigators said Wednesday they have confirmed that MH17 was shot down by a Buk missile fired from rebel-held areas in Ukraine. Emmanuel Dunand/AFP/Getty Images hide caption 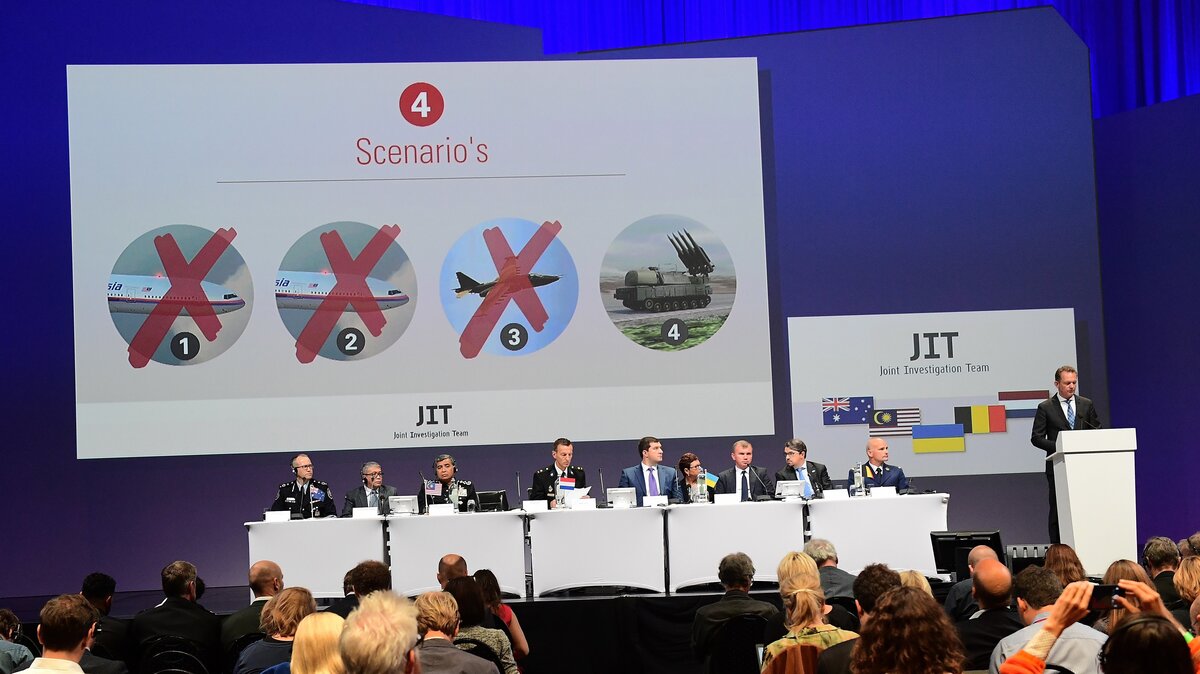 Members of a joint investigation team present the preliminary results of the criminal investigation into the downing of Malaysia Airlines Flight 17 in 2014. The investigators said Wednesday they have confirmed that MH17 was shot down by a Buk missile fired from rebel-held areas in Ukraine.

A Dutch-led team of international investigators has concluded that Malaysia Airlines Flight 17, which crashed in July 2014, was shot down by a Russian Buk missile that had been transferred into rebel-held eastern Ukraine.

After the shooting, the surface-to-air missile launcher was transferred back to Russia.

The crash of MH17 killed all 298 people aboard. The preliminary results of the international criminal investigation were announced on Wednesday in the Netherlands. Investigators said they were confident about the type of weapon used and where it was fired from — but that the investigation into who exactly was responsible for the missile launch will take more time.

There are more than 100 suspects, investigators say. The next phase of the investigation will involve interviewing suspects and tracing the chain of command within the separatists in Ukraine, to identify who gave the order to fire the missile.

An earlier investigation by the Dutch Safety Board had already concluded that the crash was the result of a missile launched from a region in Ukraine controlled by Russian-backed separatists. Earlier this year, a report from a group of volunteer citizen journalists had implicated Russia in the missile launch.

Russia has repeatedly denied sending military equipment and personnel across the border into Ukraine. Moscow has previously suggested that MH17 might have been shot down by another plane.

Now Russia maintains that if the plane were brought down by a surface-to-air missile, it must have been fired from somewhere other than the rebel-held areas identified by investigators, Reuters reports. The Kremlin said, before the Wednesday report's findings were announced, that it has new radio-location data that show the missile couldn't have been fired from rebel territory.

The report from the Joint Investigation Team, which consisted of investigators from the Netherlands, Belgium, Australia, Malaysia and Ukraine, used forensic data, witness accounts and intercepted phone calls to determine the weapon used and the location of the missile launch.

Fragments of a Buk missile were found at the crash site, including a piece of metal lodged in the frame of a cockpit window, investigators say.

They said that phone calls showed pro-Russian rebels in Ukraine requesting that the surface-to-air missile system be delivered and reporting its arrival from Russia, and that witnesses described seeing the Buk missile system in transit to the rebel territories. Shortly after the missile was fired, the Buk system was reloaded onto a truck and taken back into Russia.

Witnesses near the identified launch site — on farmland near Pervomaiskyi — saw and photographed the condensation trail of the missile, the report says.

The investigators also said they could conclusively reject the possibility that another plane, instead of a surface-to-air missile, shot down the plane. Radar data from Russia and Ukraine, as well as information provided by the U.S., show no other aircraft near the flight at the time of the crash, investigators say.