Accessibility links
After Voters Reject Peace Deal With FARC, What's Next For Colombia? : The Two-Way In the short term, President Juan Manuel Santos says he intends to maintain a bilateral cease-fire. Both sides say they'll still work to end a war that has stretched on for more than 50 years.

After Voters Reject Peace Deal With FARC, What's Next For Colombia?

After Voters Reject Peace Deal With FARC, What's Next For Colombia? 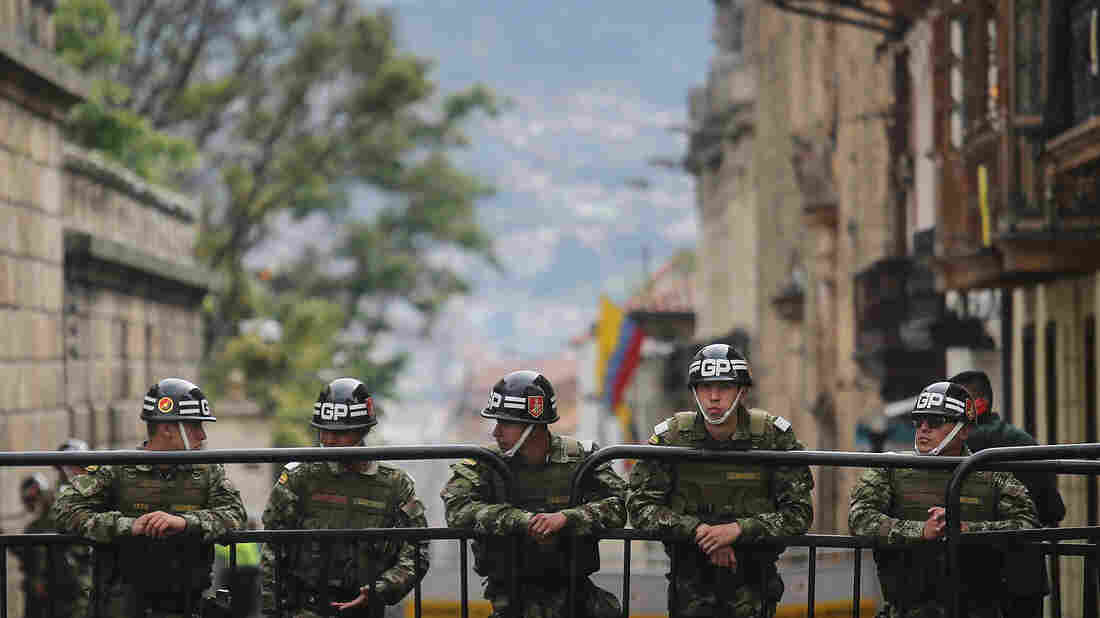 Presidential guard soldiers keep watch during the referendum on a peace accord to end the five-decade-long guerrilla war between the FARC and the state on Sunday in Bogota, Colombia. Colombian voters rejected the peace deal in a very close vote. Mario Tama/Getty Images hide caption 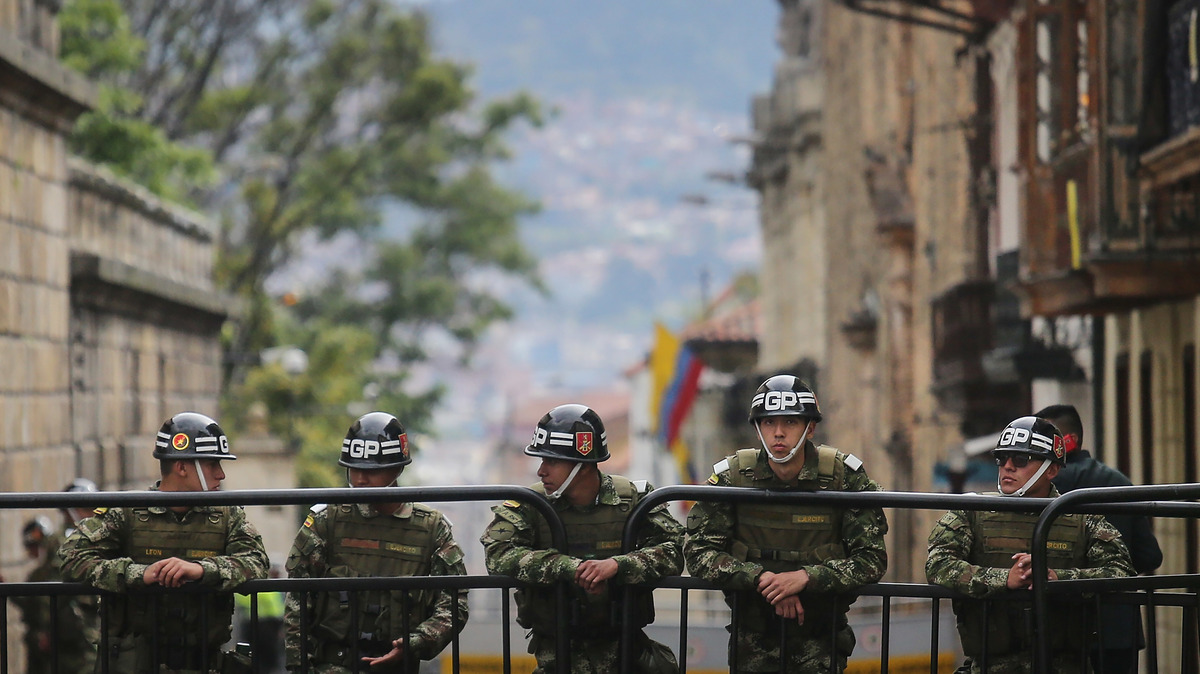 Presidential guard soldiers keep watch during the referendum on a peace accord to end the five-decade-long guerrilla war between the FARC and the state on Sunday in Bogota, Colombia. Colombian voters rejected the peace deal in a very close vote.

The Colombian government and the FARC rebel group have spent four years negotiating a peace deal to bring an end to more than 50 years of war.

Terms were agreed on, a deal was finalized, the accord was signed — and then, in a stunning turn of events, the people of Colombia voted against the agreement in a national referendum Sunday.

One thing presumably won't be happening: the FARC rebels won't be handing over their weapons to the United Nations, as they had agreed to do once the deal was final.

But what will happen next is harder to say.

"It's not going to mean that Colombia plunges back into war immediately," John Otis reports for NPR from Bogota.

President Juan Manuel Santos says he intends to maintain a bilateral cease-fire that's been in effect for several months. And, Otis says, the overall intensity of the war has been lower for the past several years.

The challenge now will be whether Santos and the FARC can revive the peace agreement after it's been rejected by the people.

Santos has said there was "no plan B" for what to do if the deal wasn't approved by the public. Both sides have now indicated they want to find a way to save it.

"I won't give up. I'll continue search for peace until the last moment of my mandate," Santos said on television Sunday night, according to The Associated Press.

"The FARC guerillas, speaking from Cuba, said they want to keep pursuing peace," Otis says. "Remember, a lot of their leaders are now in their 50s and 60s. They're ready to retire, they're ready to hang up their guns, and so they're saying they want to try to find a way out of this mess."

On Monday, the AP reports. a United Nations spokesman said the U.N. remains "fully committed to the peace process in Colombia."

And U.S. State Department spokesperson John Kirby said in a statement: "Colombia can count on the continued support of the United States as it continues to seek democratic peace and prosperity for all Colombians. We support President Santos' proposal for unity of effort in support of a broad dialogue as the next step towards achieving a just and lasting peace."

Some reports suggest there might be another pivotal player in any attempts to revive the deal: Alvaro Uribe, the powerful former president who spearheaded a campaign against the peace deal. On Sunday, Uribe said the deal needed "corrections," which some have interpreted as a sign that he'd be willing to contribute to a peace deal.

The AP has more on possible next steps for the country:

"One option for the government would be to reopen negotiations, something Santos had ruled out previously and his chief negotiator said would be 'catastrophic.' The president could also seek to ratify the accord in congress or by calling a constitutional convention, something both the FARC and Uribe have previously favored.

" 'I've always believed in a wise Chinese proverb to look for opportunities in any situation. And here we have an opportunity that's opening up, with the new political reality that has demonstrated itself in the referendum,' Santos said Sunday night before descending to the steps of the presidential palace to address a small group of supporters, some of waving white flags symbolizing peace.

"Bringing Santos and Uribe together might be harder than achieving peace with the FARC. Santos served as Uribe's defense minister, when they worked together to drive the FARC to the edge of the jungles, but the two haven't spoken for years and frequently trade insults."

And if you're still catching up on the shocking referendum result, here's how Otis has explained what was at stake:

"The question on the ballot was: 'Do you support the final accord to end the conflict and to construct a stable and lasting peace?' The answer was to be decided by a straight-up majority.

"Had the 'yes' vote triumphed, the FARC would have had six months to gather its 5,800 foot soldiers in special zones around Colombia, where they were to turn in their weapons to U.N. inspectors. The FARC had also pledged to get out of the cocaine smuggling business, help the army locate and destroy landmines, and to apologize to its victims. The FARC's long-term goal is to form a left-wing political party.

"For its part, the government had pledged a peace dividend with the end of war, promising to invest huge sums in land reform and to build roads, schools and clinics in the impoverished rural areas that gave rise to the FARC back in the 1960s. It had also predicted a boom in foreign investment and tourism."

But while the government and international leaders strongly supported the deal, many Colombians were frustrated that it would allow FARC fighters to avoid war crimes prosecution. The deal called for a special tribunal, with truth commissions and national reconciliation.

The vote ultimately ended with a victory for "no," by a razor-thin margin and with turnout of just 37 percent, the AP writes.

The result was a "stunning political defeat" for the already unpopular Santos, the wire service notes.

And it sent shock waves across Latin America. In Cuba, the leaders of the FARC had ordered drinks and cigars at a beach club in anticipation of a celebration. They watched the results in disbelief.

At a hotel in Bogota, hundreds of supporters of the peace deal who had gathered for a similar party instead "wept in despair," the AP writes.