Accessibility links
With EU Vote, Paris Climate Agreement Is Poised To Become Binding : The Two-Way The European vote to ratify it effectively ends debate over the climate deal. Once the EU turns over paperwork to the U.N. later this week, the plan will officially come into force. 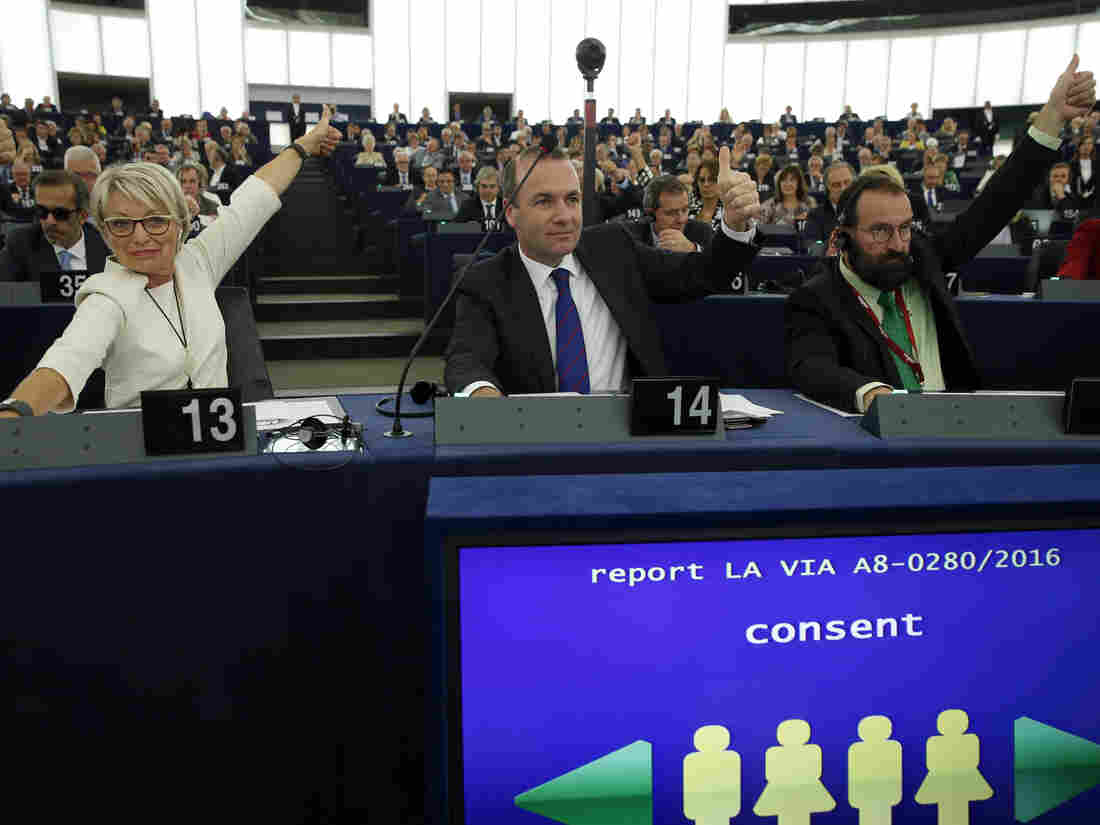 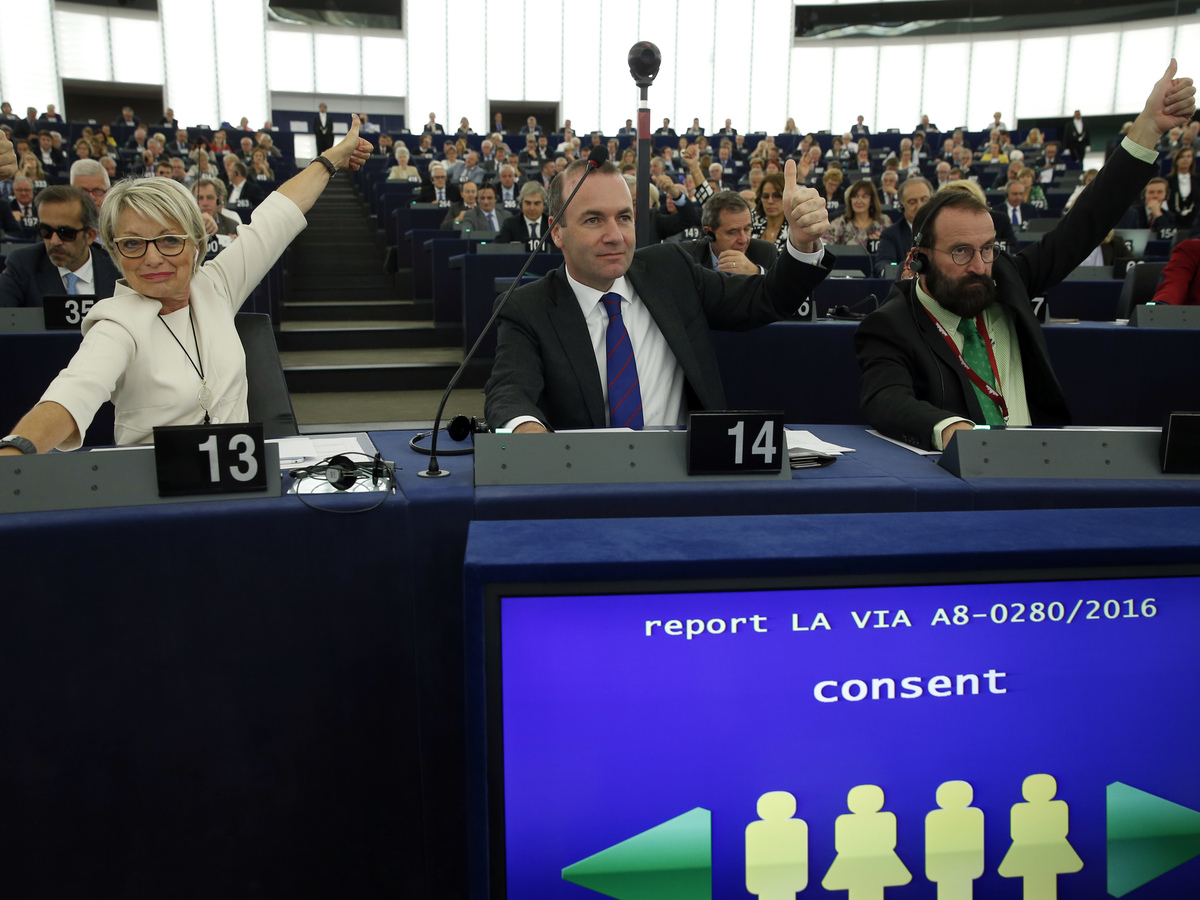 European lawmakers (left to right) Francoise Grossetete of France, Manfred Weber of Germany and Jozsef Szajer of Hungary vote in favor of the Paris climate change agreement on Tuesday.

The European Parliament voted Tuesday to ratify the landmark Paris climate accord, paving the way for the international plan to curb greenhouse gas emissions to become binding as soon as the end of this week.

With U.N. Secretary-General Ban Ki-Moon watching, representatives from the 28 European Union member countries voted 610 to 38 in favor of the agreement. Now, each individual country must sign off before the ratification documents can be formally presented to the United Nations.

The climate agreement has two requirements before it can go into effect: It must be ratified by 55 nations, and the ratifying countries must account for 55 percent of the world's greenhouse gas emissions. As of Sunday, when India formally turned in its paperwork, the totals stood at 62 countries producing about 52 percent of emissions.

With the EU on board, the emissions total will cross the 55-percent mark.

"It is truly an honor to be able to witness the historic moment," Ban said after the vote passed, and said he "looked forward to the Paris agreement entering into force as soon as possible, in just a few days' time."

Ban has pushed to move the agreement quickly since more than 180 countries initially agreed to it at the Paris climate conference last December. "The entry into force of the Paris agreement less than one year after its signature is a massive achievement, given that it took eight years for the Kyoto protocol," said European Parliament President Martin Schulz, referring to the agreement's predecessor which was agreed upon in 1997 but did not go into effect until 2005.

Once the agreement officially goes into effect, it becomes binding for four years for all the nations that ratified it. The next step for the U.N. is deciding how it will monitor and enforce the deal, NPR's Christopher Joyce reports.

Each country that signed on has already submitted a national plan for how it will curb greenhouse gas emissions. India, for example, promised to generate 40 percent of its electricity with non-fossil fuel sources by 2030.

But because the agreement allows each country to submit a plan tailored to their national economy's needs and abilities, it can be difficult to compare the promises made by different nations. Take, for example, the plans put forth by the two biggest greenhouse gas emitters in the world: China and the U.S.

The U.S. plan promises to reduce its greenhouse gas emissions across the economy by 26 percent to 28 percent in 2025. As we've reported, China's government has said emissions there will continue to rise (although NPR's Chris Joyce notes that is not necessarily accurate) but pledges that emissions will peak in 2030 and then decline.

And the European Union's joint plan for member countries, submitted in March, described yet another timetable. The EU promises a significant "binding target of an at least 40 percent domestic reduction in greenhouse gas emissions by 2030 compared to 1990" and notes that the bloc is in a strong position because it has already taken steps that "reduced their emissions by around 19 percent on 1990 levels" since 2012, "while GDP has grown by more than 44 percent over the same period."

The EU plan includes the United Kingdom, but it remains to be seen how the U.K.'s exit from the bloc could change the country's individual emissions policy. The U.K.'s 2008 climate change act requires the country to reduce greenhouse gas emissions by 80 percent compared to 1990 levels by the year 2050.

In 2014, the U.K. was the second-largest emitter of greenhouse gases in Europe, according to the European Parliament.