Accessibility links
Retired Marine Receives A Double Arm Transplant : The Two-Way Then-Sgt. John Peck lost all four limbs to an improvised explosive device while on patrol in Afghanistan in 2010. He is reported to be the second war veteran to receive a double arm transplant. 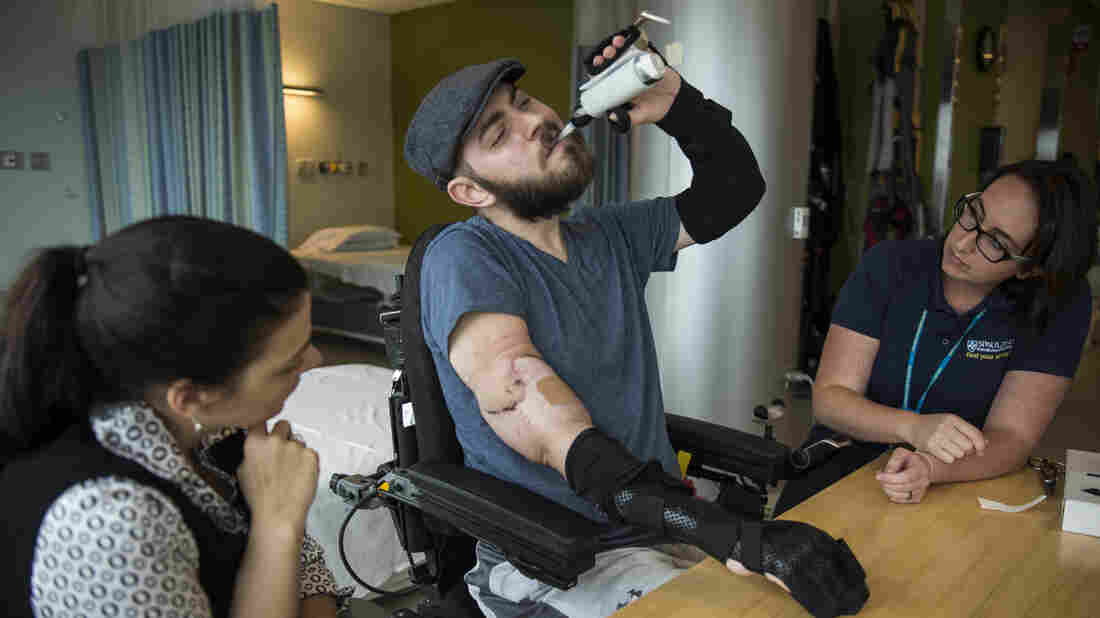 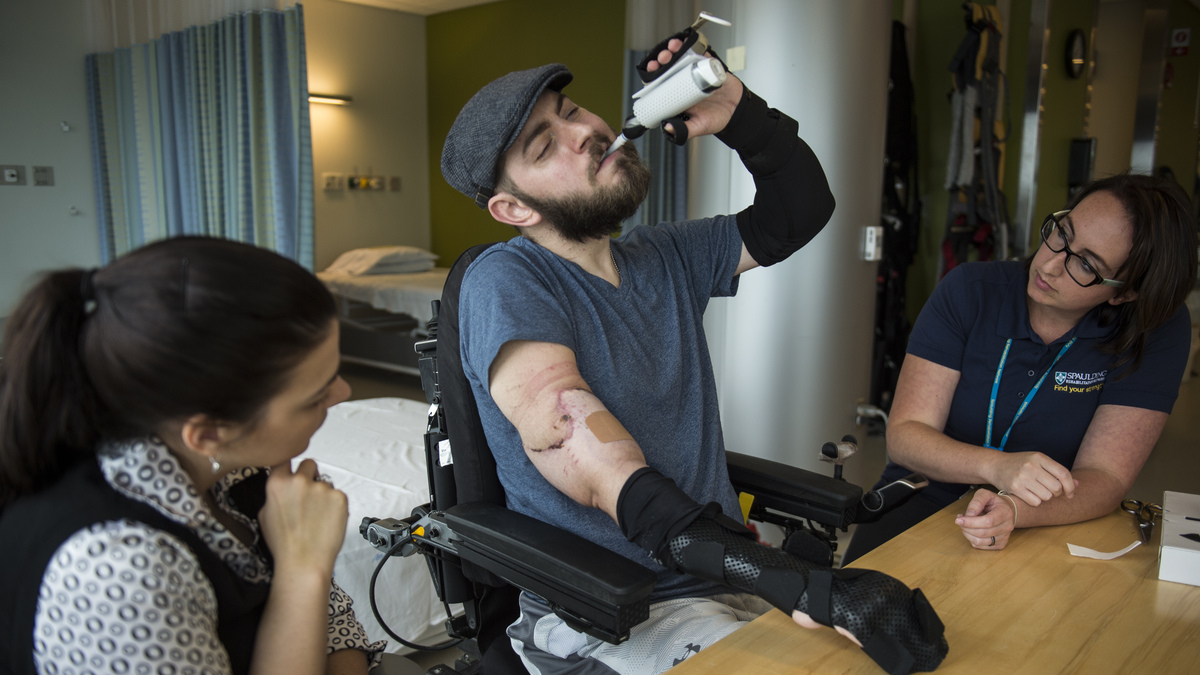 Fiancee Jessica Paker looks on as Ret. Marine Sgt. John Peck works with occupational therapist Meredith Grinnell. Peck, who was injured in Afghanistan in 2010, recently received a double arm transplant after a two-year wait on a transplant list.

Six years ago, Marine Sgt. John Peck had all four of his limbs blown off by an explosion in Afghanistan. Today, thanks to a double arm transplant, he is talking about the miracle of holding his fiancee's hand and feeling the pressure when she squeezes.

"That truly is a special gift," the retired Marine told reporters at a news conference at Brigham and Women's Hospital in Boston.

Peck, 31, underwent a 14-hour surgery in August, performed by a team of 60 doctors, nurses and other medical personnel led by Dr. Simon Talbot, the hospital's director of upper extremity transplantation.

Talbot said it will be nine to 12 months before the nerves in Peck's new arms are fully functional again. Still, Peck said he can lift his arms and is relearning to brush his teeth, dress and feed himself. His goal is to achieve the dream he's had since he was a boy: to become a world-class chef.

Peck's remarkable story was detailed in The Washington Post. In May 2010, he lost his limbs to an improvised explosive device during a search mission in a small village in Afghanistan's Helmand province.

It was his second close brush with death. Peck suffered a traumatic brain injury in August 2007 while serving in Iraq. After his rehabilitation from that injury, he re-enlisted in the Marines in 2009.

Should Doctors Game The Transplant Wait List To Help Their Patients?

Peck is believed to be the second quadruple amputee veteran of the Iraq and Afghanistan war to receive a double arm transplant, according to the Post. The first veteran to receive such a transplant, former Army Sgt. Brendan Marrocco, told the paper he and his new arms are doing well.

The Boston Globe reports that Peck's is the fourth double arm transplant performed at Brigham and Women's Hospital. The hospital paid for the surgery, and the doctors volunteered their services.

The donor and his family have not been identified in accordance with their wishes, said a hospital spokesperson.

For his part, Peck made his gratitude plain.

"My deepest condolences to my donor's family," said Peck as his voice cracked.

"I'm not even going try to know what you're going through at this time. But I will tell you this: Your loved one's death will not be for nothing. Every day that I look down at our new arms, I will drive on through the pain and I will never give up."