Accessibility links
Putting Traffic Deaths In The Past Tense : The Two-Way Transportation officials say road fatalities spiked alarmingly in the U.S. in the first half of 2016. But they say they will develop a plan to eliminate crash deaths in 30 years. 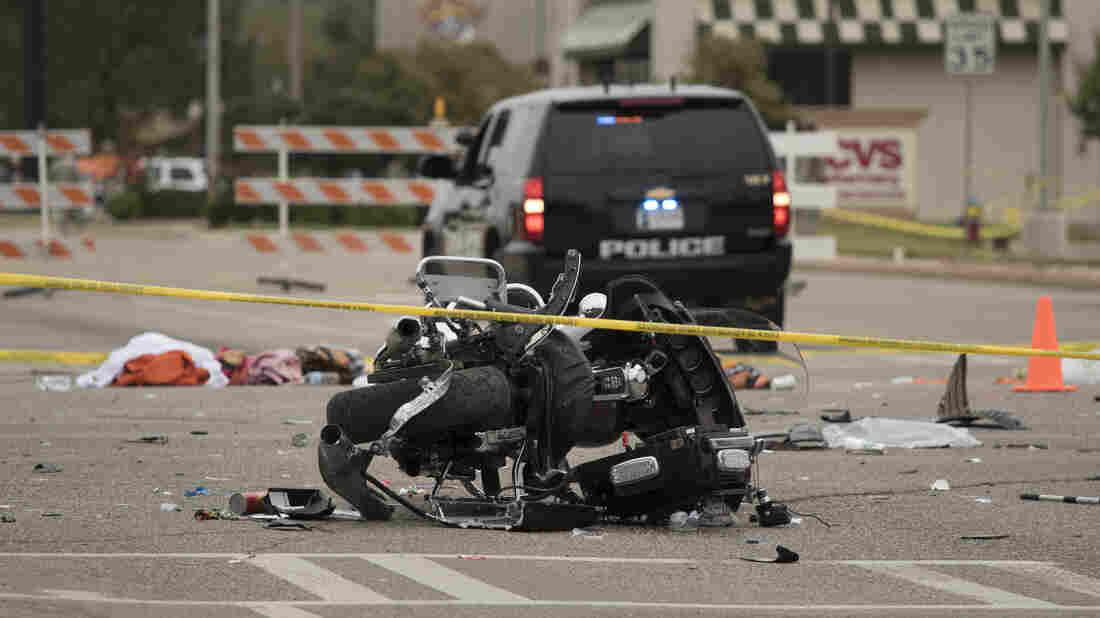 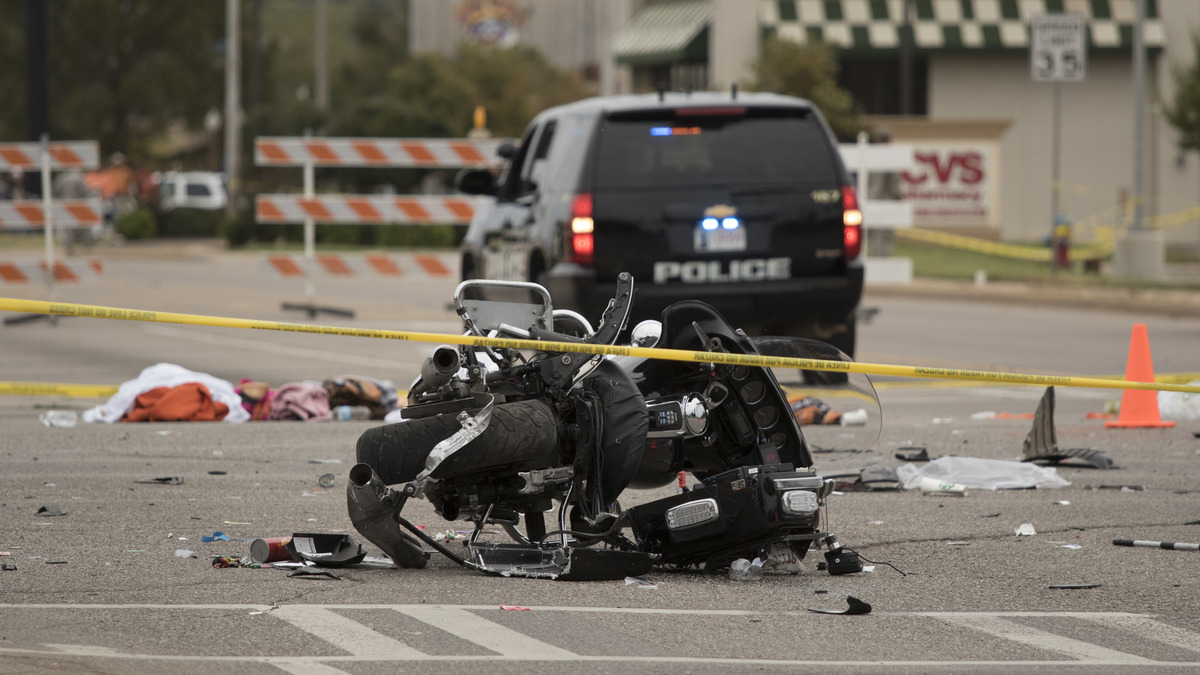 A wrecked police motorcycle lays on the scene after a suspected drunk driver crashed during the Oklahoma State University homecoming parade in Stillwater, Okla.

Zero. That's the stated goal of transportation officials in the U.S., no traffic fatalities by 2046. Zero deaths is a movement that began in Sweden. There, it's called Vision Zero. The idea is simple. "No loss of life is acceptable." That is the one sentence motto of Sweden's campaign.

Sweden is rewarded by having the world's lowest traffic death rate. According to the World Health Organization, only Monaco and the Federated States of Micronesia have a lower traffic death rate than Sweden. There are approximately three traffic deaths per 100,000 in Sweden.

Here in U.S., the rate is nearly four times that at approximately 11 deaths per 100,000. Transportation officials in the U.S. say they want to repeat Sweden's success. 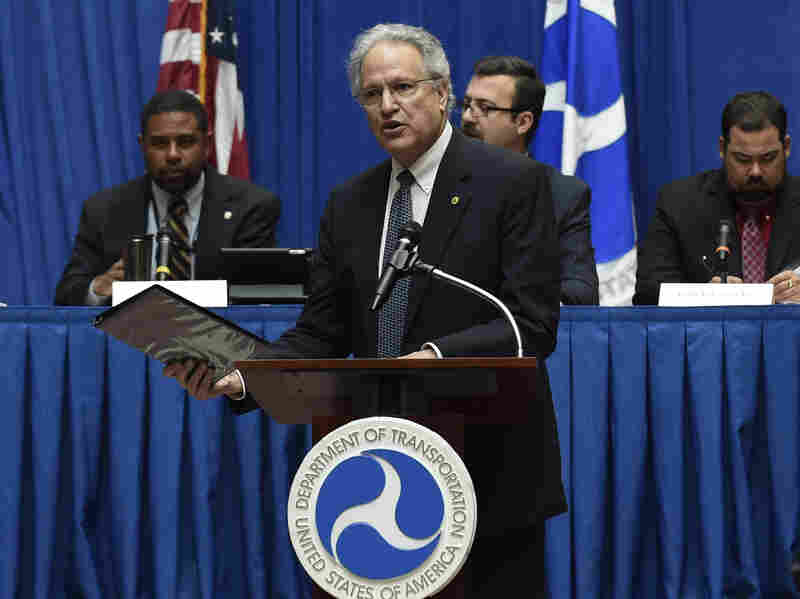 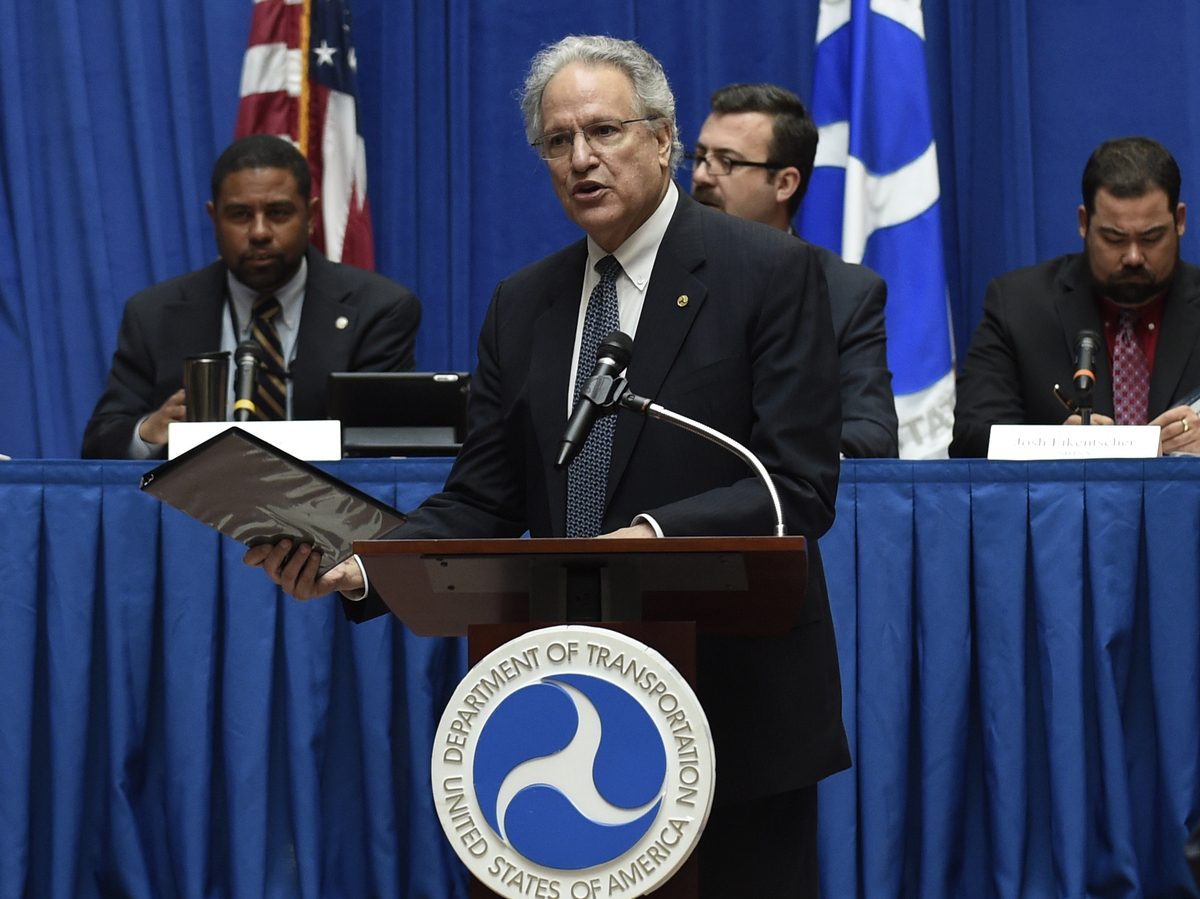 Here in the U.S., deaths increased by 7 percent in 2015, with 35,092 total traffic fatalities. In the first half of 2016, 17,775 people died on roads, according to numbers released by the National Highway Traffic Safety Administration. So far, the U.S. traffic fatalities are up by over 10 percent according to NHTSA.

One of the tragic coincidences is that as economic activity increases and more people with jobs are on the road, traffic fatalities go up. U.S. drivers put in a record 1.58 trillion miles on the road in the first half of this year, the Federal Highway Administration said this week. That's a 3.3 percent increase over the same period in 2015. Meanwhile, the rate of deaths is up by more than 10 percent.

"The really sad part is that in the United States we accept 35,092 people dying on the roadways and thinking that's okay. It should be unacceptable," says Mark Rosekind, the head of NHTSA. Rosekind's father was a motorcycle policeman in San Francisco, who was killed on the road in the line of duty. "There are too many stories like this," Rosekind says.

Several states and cities in the U.S. have adopted this zero-tolerance policy. Practically, getting to zero is not only an ambitious goal, but a complex one as well. In Sweden, a premium is placed on safety over convenience, traffic or speed. Low urban speed limits, strict policing of drunk driving, bike lanes with barriers separating cyclists from traffic, and smart pedestrian crossings are some of the solutions implemented.

"There isn't actually a single magic bullet. It's not like you can say if the entire country just changed its speed laws then we'd get rid of all fatalities on the road," Rosekind warns. Over the next month, he says, federal, state, and local governments along with the private sector will develop a plan that moves the country toward the zero-traffic fatalities.

"One of the ways for us to get there is to figure out how to leverage all the new technologies that are coming online that will help us improve safety," Rosekind says. Autonomous vehicle technology with innovations such as automated braking will get the country closer to the goal, Rosekind says. But self-driving cars are not a panacea, at least not in the near term. Full, self-driving vehicles are still years away, he says. "And even if we were to get a perfect self-driving car tomorrow, it still takes 20 or 30 years to get into our fleet." Without a plan, Rosekind says, it could take 50 or 60 years before self-driving cars alone helped bring the death rate down.

"In 30 years, we could be looking at zero deaths on our roadways. It's bold. There's no question it's a heavy, heavy lift," says Rosekind. But putting the focus on traffic deaths now, he says, sets the country up "for a future that could really be dramatically different than the tragedy we live in now."

A searchable WHO map of road fatalities
How the countries rank when it comes to road deaths.