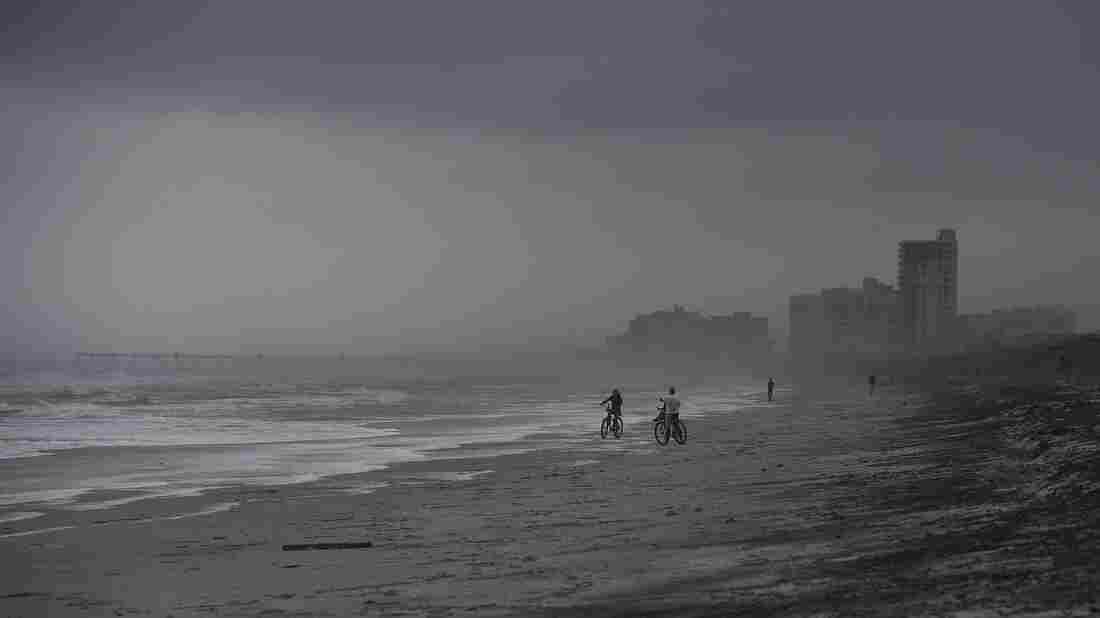 People bike on the beach ahead of Hurricane Matthew in Atlantic Beach, Fla., on Wednesday. Droves of people in the U.S. have begun evacuating coastal areas ahead of the storm, which tracked a deadly path through the Caribbean in a maelstrom of wind, mud and water. Jewel Samad/AFP/Getty Images hide caption 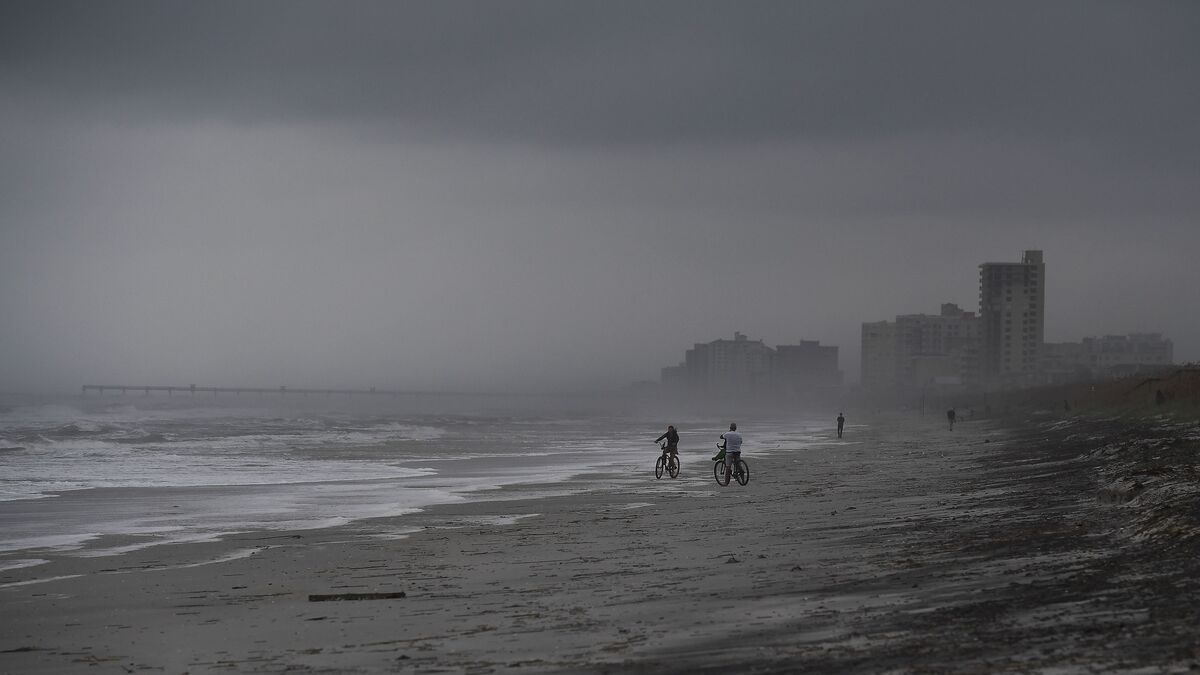 People bike on the beach ahead of Hurricane Matthew in Atlantic Beach, Fla., on Wednesday. Droves of people in the U.S. have begun evacuating coastal areas ahead of the storm, which tracked a deadly path through the Caribbean in a maelstrom of wind, mud and water.

'The Situation ... Is Truly Catastrophic'; Hurricane Matthew Slams Into Haiti

The worst of the storm is bypassing the Miami and Fort Lauderdale areas and aiming north of Palm Beach County.

Power is reported out for more than 60,000 customers.

President Obama declared states of emergency in Florida and South Carolina on Thursday ahead of Hurricane Matthew reaching land.

For Florida residents who think they can ride out Hurricane Matthew, Gov. Rick Scott has just three words:

"There are no excuses. You need to leave," he said on Thursday morning. "This storm will kill you. Time is running out."

Along the coast in Florida, Georgia and South Carolina, millions of residents have been urged to head inland as the powerful hurricane makes its approach.

The storm is strengthening as it batters the Bahamas and moves toward Florida, the National Hurricane Center says. As of late Thursday morning, the storm is a Category 4 that's expected to near the Florida coast late Thursday and early Friday, the agency forecasts.

Hundreds of people died as the storm tore through Haiti, Cuba and the Bahamas, including at least 283 dead in Haiti alone.

In Florida, more than 3,000 people were already in shelters as of Thursday morning, The Associated Press says. More than 1.5 million people in the state have been "urged or ordered to leave the coast," the wire service wrote. 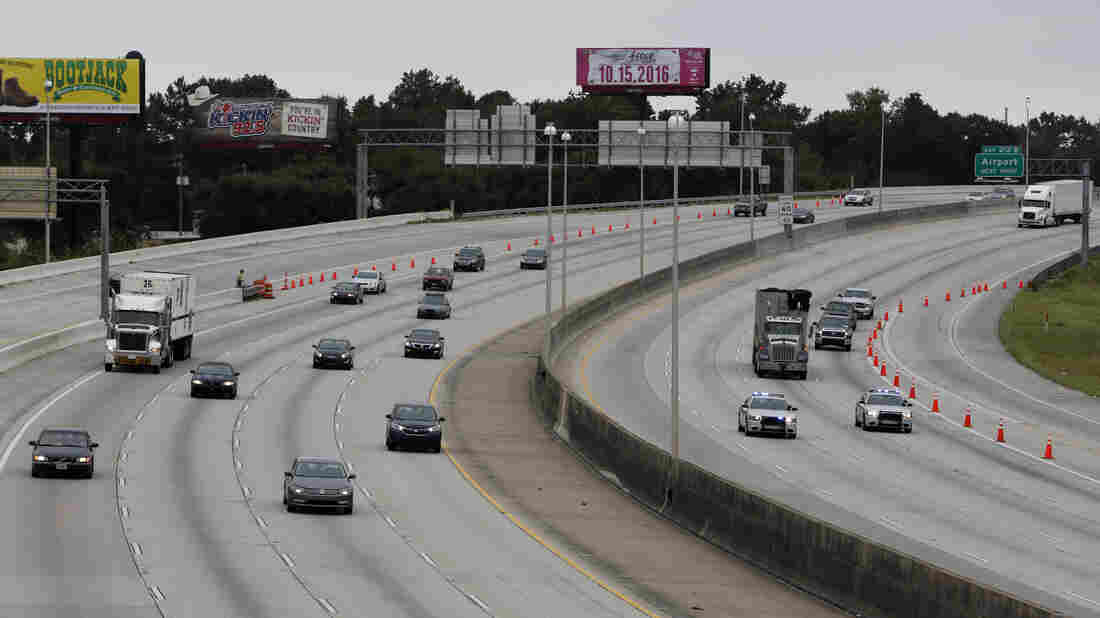 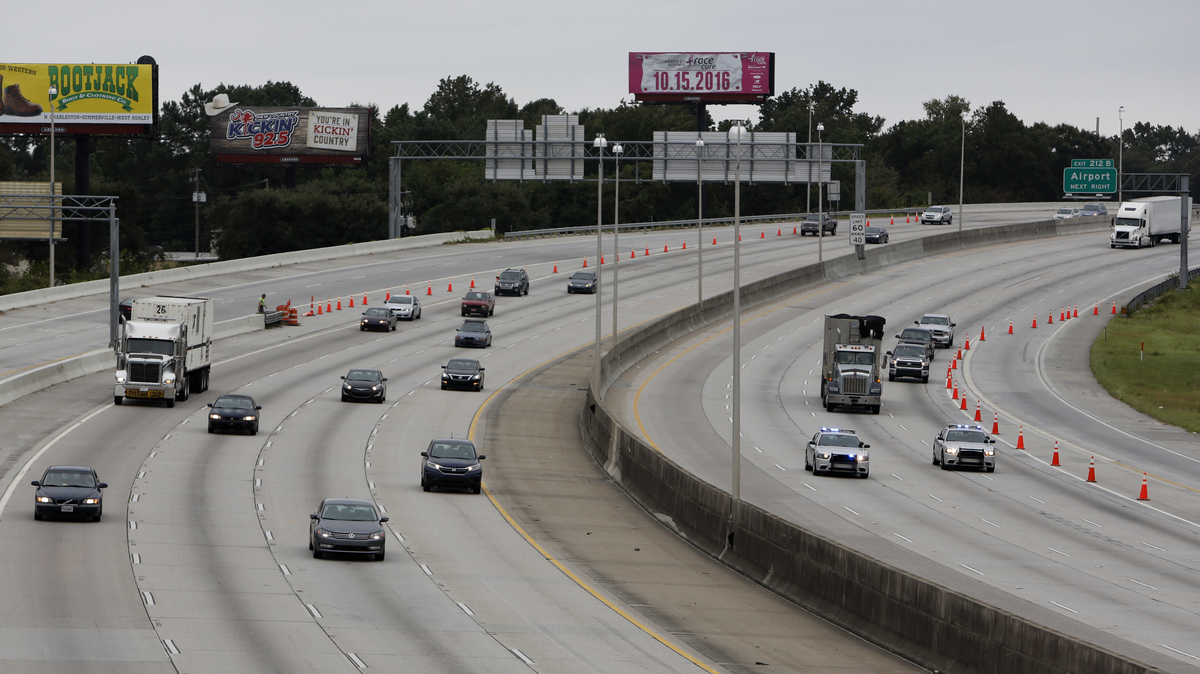 South Carolina state troopers (right) lead the first wave of cars evacuating on the reversed lane of Interstate 26 on Wednesday, as the state prepares for Hurricane Matthew.

Hospitals and a nursing home near Daytona Beach are transferring patients and residents to facilities farther inland, the AP says.

All Disney World theme parks are closing on Thursday at 5 p.m. and remaining closed on Friday, Disney announced.

Not everyone is retreating from the coast: One resident of Cape Canaveral told the AP he plans to ride out the storm in his RV less than a mile from the shore. "The hype is going to be worse than the actual storm. I feel I can do quite well," he said.

Scott exhorted any Floridians thinking similarly to change their minds immediately. "If you're reluctant to evacuate just think of all the people this storm has already killed," he said. "You and your family can be among these numbers if you don't take this seriously. "

He warned of winds between 100 and 150 mph, capable of taking down even well-built houses. "No one should take any chances," he said.

'We Were Already In A Cholera Crisis'; Hurricane Pummels Haiti, Heads North

In Georgia, where the coastline is relatively short, Gov. Nathan Deal is urging more than 500,000 people to evacuate — the first time the state's coast has been evacuated in 17 years, the AP reports.

Many residents are under voluntary evacuation orders, but mandatory evacuation has been ordered east of Interstate 95 in all six coastal counties — an area that includes the city of Savannah. Lanes of traffic on Interstate 16, the major east-west corridor leading to Savannah, are being reversed so traffic flows only westward, the Atlanta Journal-Constitution reports.

Tens of thousands of people on Tybee Island and in low-lying communities had already been ordered to head inland, The Journal-Constitution said.

In South Carolina, some 1.1 million people have been urged to leave their homes, The Post and Courier reports.

Haley had already taken the unprecedented step of ordering all lanes of Interstate 26 in South Carolina to travel west out of Charleston. The idea for the lane reversal was developed after Hurricane Floyd in 1999, which caused massive congestion as the interstate was packed with fleeing coastal residents.

So far, there haven't been reports of excessive congestion in South Carolina. But an altercation between police and a motorist over evacuation routes resulted in the exchange of gunfire late Wednesday, leaving the motorist injured, the AP reports.

Floyd, the storm that caused such memorable traffic jams, ultimately veered away from South Carolina and left relatively little damage in the state. Haley told residents that it was still possible that Matthew, too, would shift away, but based on current forecasts, residents should travel at least 100 miles from the coast.

"If you don't get out in time, then you might get stuck," Haley said, according to the Post and Courier. "I think that's the worst-case scenario."

On Thursday morning, Haley said some 175,000 South Carolinians had evacuated so far. "That's not enough," she said, according to The State.

Governors in all three states have declared a state of emergency in coastal regions. Meanwhile, more than 3,785 flights have been canceled in anticipation of the storm, FlightAware reports.

"The most recent major hurricane along the Georgia coast was in 1898," he writes.

The last Category 3 or higher to hit the U.S. at all was Wilma in 2005, the AP notes — the storm struck in southwest Florida and killed five people.

Whether Matthew will actually make landfall is unclear. The National Hurricane Center explains that the storm is "forecast to take a track roughly parallel to the coastline." That means a "very small deviation" could cause landfall along the coast — or, alternatively, send the storm offshore.

The AP explains that the eye of the storm doesn't need to cross over land to be dangerous and destructive. "In some ways, the worst-case scenario would be if the storm's eye stays just offshore, enabling it to feed over water and avoid weakening while its strongest hurricane winds keep smacking the beaches," the wire service reports, citing a University of Miami meteorology researcher.

As the Two-Way reported yesterday, Matthew had a devastating impact in Haiti, washing out roads and raising concerns that the country's cholera crisis could grow even worse.