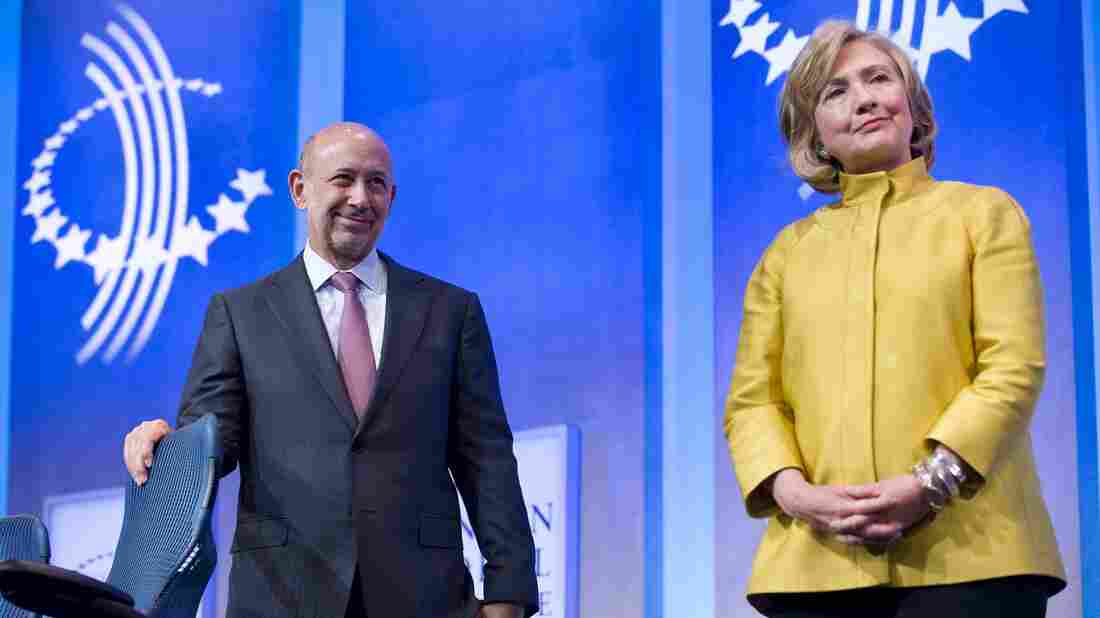 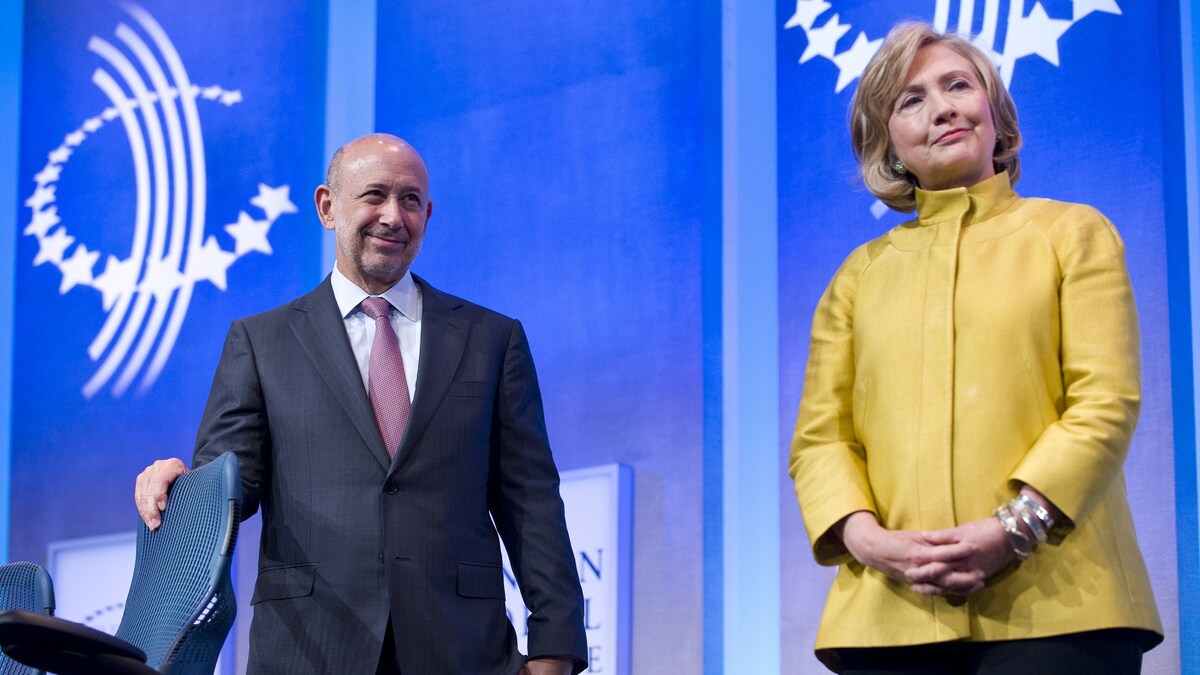 Excerpts from speeches Hillary Clinton was paid to give to big banks suggest a relationship with Wall Street that is a lot more familiar and pragmatic than the fiery rhetoric she has sometimes used on the campaign trail.

"I represented all of you for eight years. I had great relations and worked so close together after 9/11 to rebuild downtown, and a lot of respect for the work you do and the people who do it," she told a Goldman Sachs symposium on Oct. 24, 2013.

But in transcript of her comments, found in an email included in a release by WikiLeaks on Friday, Clinton went on to say that the financial crisis had demonstrated the importance of bank regulation: "I think that when we talk about the regulators and the politicians, the economic consequences of bad decisions back in '08, you know, were devastating, and they had repercussions throughout the world."

NPR has not verified and the Clinton campaign has not confirmed the authenticity of the emails. But the campaign has not disputed the veracity of some contents that have been widely reported.

In another speech, to a San Diego law firm, the former secretary of state praised some of the people she knew on Wall Street, but also said she wasn't afraid to work against their interests: "When I was a senator from New York, I represented and worked with so many talented, principled people who made their living in finance. But even though I represented them and did all I could to make sure they continued to prosper, I called for closing the carried interest loophole and addressing skyrocketing CEO pay."

The excerpts were contained in an email to Clinton staffers from campaign research director Tony Carrk. The speeches were delivered after she resigned as secretary of state but before she started her presidential campaign.

Clinton's relationship with Wall Street was an ongoing issue during her long primary campaign against Sen. Bernie Sanders, I-Vt., who frequently excoriated her for making lucrative speeches to banks and taking donations from them. He also frequently called on her to release transcripts of her speeches, which she has refused to do.

"To a significant degree, her campaign is funded by Wall Street and big money interests," Sanders told CNN in an interview last February.

A report published in July by the Center for Responsive Politics said donors from the "securities and investment industry" have given nearly $40 million to the Clinton campaign and pro-Clinton superPACs, more than any other industry. But the report also said most of that money had come from a very few liberal donors.

CNN reported in February that the Clintons had delivered 729 speeches from February 2001 until May 2015, receiving an average of $210,795 for each address. They also reported "at least $7.7 million for at least 39 speeches to big banks, including Goldman Sachs and UBS."

Clinton has repeatedly insisted that the speeches and donations had no impact on her decisions as senator or secretary of state. "You will not find that I ever changed a view or a vote because of any donation that I ever received," she said during a debate with Sanders.

The excerpts released yesterday contain few real bombshells but they do suggest that Clinton had a level of comfort with her audience. In one Goldman Sachs speech, she spoke about the difficulty Wall Street officials have making the transition to government work, noting, "there is such a bias against people who have led successful and/or complicated lives. You know, the divestment of assets, the stripping of all kinds of positions, the sale of stocks. It just becomes very onerous and unnecessary."

In another speech, she allowed that the growing wealth of her and her husband, former President Bill Clinton, had insulated her from some of the realities of middle-class life, while acknowledging "the growing sense of anxiety and even anger in the country over the feeling that the game is rigged." She then went on to reminisce about her own "solid middle-class upbringing."

"So I lived that," she said. "And now, obviously, I'm kind of far removed because the life I've lived and the economic, you know, fortunes that my husband and I now enjoy, but I haven't forgotten it."

At another speech before the National Multifamily Housing Council in April 2013, Clinton said politicians sometimes needed to have both a "public and a private position" on contentious policy matters: "I mean, politics is like sausage being made. It is unsavory, and it always has been that way, but we usually end up where we need to be. But if everybody's watching, you know, all of the back room discussions and the deals, you know, then people get a little nervous, to say the least."

That is borne out by some of her remarks about the financial system and the 2008 crash, which suggest a view that is more nuanced than her typical campaign speeches. Clinton noted that there was a common public view that the United States and its banking system had caused the crash:

"Now, that's an oversimplification we know, but it was the conventional wisdom. And I think that there's a lot that could have been avoided in terms of both misunderstanding and really politicizing what happened with greater transparency, with greater openness on all sides, you know, what happened, how did it happen, how do we prevent it from happening," she said to Goldman Sachs in October 2013.

And to Deutsche Bank in October 2014: "So even if it may not be 100 percent true, if the perception is that somehow the game is rigged, that should be a problem for all of us, and we have to be willing to make that absolutely clear. And if there are issues, if there's wrongdoing, people have to be held accountable and we have to try to deter future bad behavior, because the public trust is at the core of both a free market economy and a democracy."

As a Democrat who represented New York in the Senate, Clinton has had an ambivalent relationship with Wall Street. In 2008, she voted for what would become the start of the bank bailout, noting in an interview with WNYC that it would benefit her state.

"I think the banks of New York and our other financial institutions are probably the biggest winners in this [bailout], which is one of the reasons why in the end, despite my serious questions about it, I supported it," she told host Brian Lehrer. But she also voted for the Dodd-Frank financial overhaul bill, and more recently she has proposed tighter oversight of large financial institutions.

She has also lambasted "the shadow banking industry," which includes firms such as hedge funds and insurance companies that perform many of the same functions as banks. And she has proposed closing a loophole that allows banks to trade taxpayer backed money through hedge funds.