Accessibility links
2 Strangers And A Drone Help Rescue Veteran Trapped By N.C. Flooding : The Two-Way A drone photographer posted an image of a submerged home in North Carolina. Then a man in Texas discovered it was his brother's house — and the two men managed to coordinate a rescue operation. 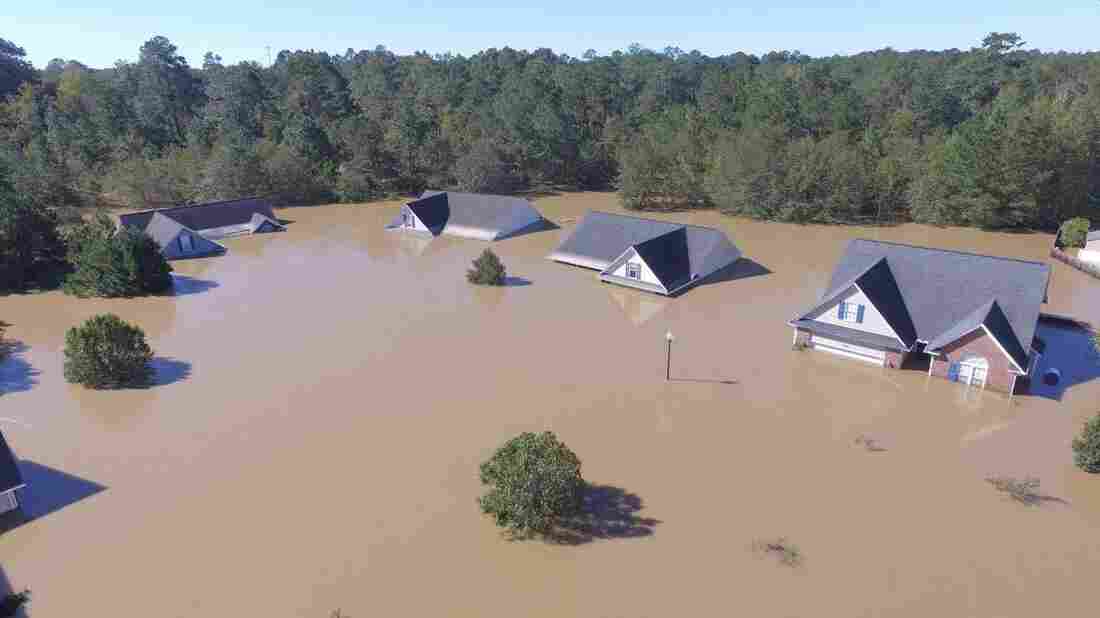 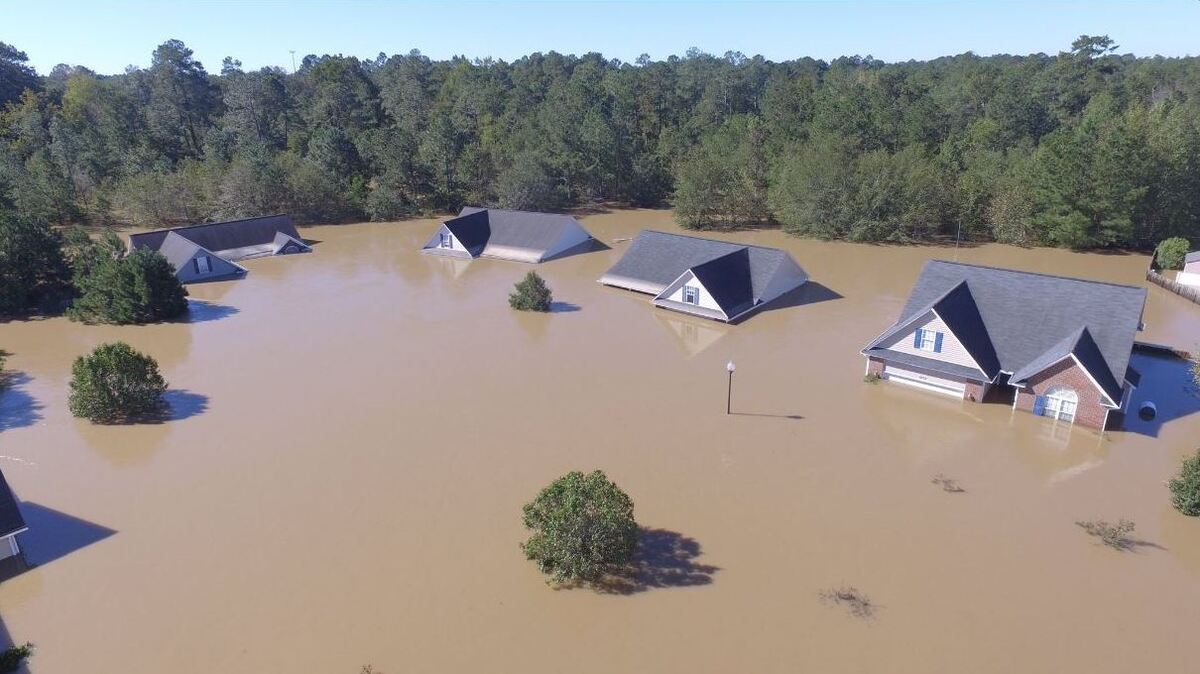 This image of flooded homes in Hope Mills, N.C., prompted a dramatic rescue.

In this unlikely tale, two strangers and a drone played crucial roles in rescuing a man trapped in his flooded home in Hope Mills, N.C.

Drone photographer Quavas Hart decided to take his drone out on Sunday to capture images of some of the areas hardest hit by Hurricane Matthew.

"I happened to come across this neighborhood that was completely submerged in water," Hart tells The Two-Way. He posted a picture on Twitter showing the dramatic scene of a cul-de-sac with floodwaters up to the eaves of the roofs.

As it turned out, Navy veteran Chris Williams and his elderly dog Lana were trapped in the house with one blue shutter to the right of the picture.

Williams thought he was out of the hurricane's path when his power went out a day and a half before, according to his twin brother, Craig Williams, who lives in Texas. "During that day and a half," Craig told The Two-Way, "the hurricane shifted paths and was coming directly towards him."

Chris went to sleep on Saturday night — and woke up to a bang. The surging water had broken through his back door, sending furniture crashing around the house. He grabbed Lana and raced to the highest point in the house, a small room where he had some food stored. "He spent the next 14 hours sitting there," Craig said.

During this time, both Craig and Chris tried to contact local emergency services to reach rescue crews — to no avail. Chris' phone line was down but the brothers were able to stay in touch over Facebook Messenger. When Craig finally got in contact with rescuers on Sunday, they eventually told him they weren't able to get to his brother's area.

Then Craig spotted Quavas' dramatic cul-de-sac picture on Twitter, and wrote a joking note to Chris: "Hey, at least you're not this guy."

It only took a few seconds for Chris to respond: "Hey, that's my house."

Craig immediately reached out to Quavas with this plea: "Any chance you can boat him out of there? He's trapped upstairs."

@ImSoFIRST holy shit that's my brothers house..the one with one shutter. Any chance you can boat him out of there? He's trapped upstairs..

Quavas tells The Two-Way that he didn't initially believe the message was real. "I thought it was someone trolling – it's Twitter, it's worldwide. ... I'm paying this guy no mind."

But Craig messaged again that he was "completely serious." He explained that his brother had an "old dog with him that can't swim."

So Quavas rushed back to the flooded neighborhood to try to help rescue Chris. He says he deployed the drone again, and spotted a FEMA boat nearby. He managed to signal the boat to follow his drone, and then led the rescuers to Chris' house.

You can see Quavas' video of the moment the rescuers reached Chris and Lana, with Chris looking out the top-floor window:

How I helped save a mans life with my #drone #Dji #HurricaneMatthew pic.twitter.com/xMU5ofFUe2

Quavas is also a veteran — he says he served in the Army for 10 years, with deployments in Iraq and Afghanistan. The father of four left the military in July 2012 and went to film school. "It's kind of like replacing my weapon with my camera, from my perspective."

He's still coming to terms with the serendipitous rescue. "It's just so wicked crazy amazing, humbling, I don't know how to explain it," he says. Quavas adds that his home was also damaged in the floods.

Craig says that while his brother is physically safe, "he's not doing great." They're expecting the home will cost tens of thousands of dollars to repair. "Unfortunately he wasn't insured – his house is not in the flood plain, it's never been flooded," he says. "It's a worst-case scenario." The family is seeking donations here.

As we have reported, the floodwaters in parts of North Carolina reached record levels. North Carolina Public Safety says at least 19 people have died as a result of flooding in the state.