Accessibility links
Thai King Bhumibol Adulyadej, World's Longest-Reigning Monarch, Dies : The Two-Way The beloved monarch became king in 1946 at age 19 and was seen as a symbol of unity and national identity. He had been in poor health for most of the past decade. 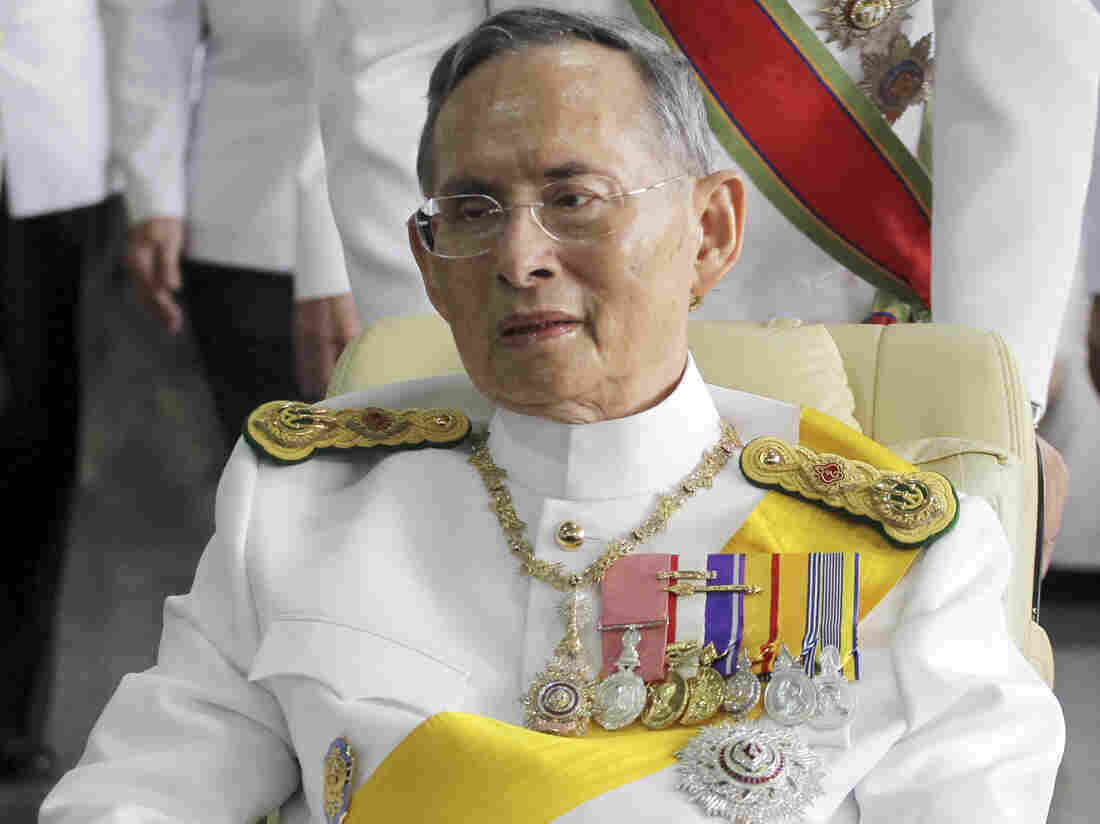 Thailand's King Bhumibol Adulyadej is pushed in a wheelchair while leaving Bangkok's Siriraj Hospital for the Grand Palace for a ceremony celebrating his birthday in 2011. Apichart Weerawong/AP hide caption 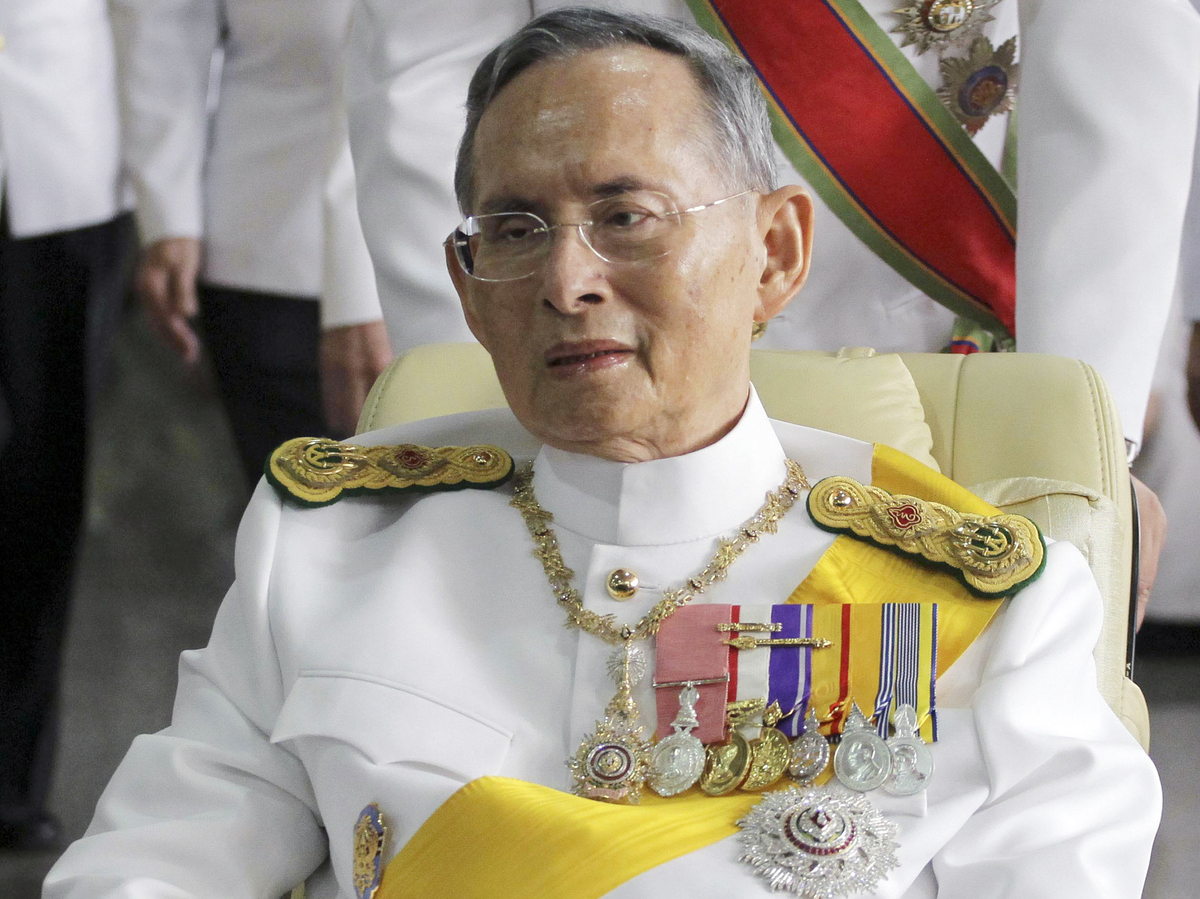 Thailand's King Bhumibol Adulyadej is pushed in a wheelchair while leaving Bangkok's Siriraj Hospital for the Grand Palace for a ceremony celebrating his birthday in 2011.

Thailand's revered King Bhumibol Adulyadej, who was a unifying force in a country riven by politics and coups, has died at the age of 88, according to the royal palace.

"Even though the board of doctors has closely monitored and treated him to the best of its abilities, the king's condition never improved but deteriorated until Thursday," the palace said in a statement, according to The Associated Press.

Bhumibol had suffered from health problems for most of the past decade. The palace had said Sunday that he was "not stable" following a medical procedure, as The Two-Way has reported.

Bhumibol was the world's longest-reigning monarch, reporter Michael Sullivan tells Morning Edition. He became king in 1946 at the age of 19.

The king was born in Cambridge, Mass., and grew up in Europe. Because of that, "expectations for him were quite low when he originally came back from Switzerland to take the throne and be in Thailand full time," Michael Montesano, a senior fellow at Singapore's Institute of Southeast Asian Studies, told Sullivan.

But he stepped into the role quickly and was viewed as a stabilizing force at a delicate time in Thai history.

"He will be seen as a man who played a very important and in many ways benign role in achieving integration in a Southeast Asian state during a time when much of Southeast Asia was coming apart and the Cold War was doing terrible damage to the region," Montesano added.

And while Bhumibol had a massive fortune, he was also considered "remarkably down-to-earth," The Associated Press reported. "He rolled up his sleeves and hiked into impoverished villages and remote rice paddies to assess the state of his country and help resolve everything from water and food shortages to family squabbles," the wire service added. The king also played the clarinet, trumpet and other instruments and was passionate about jazz.

The Thai economy grew rapidly from the 1960s to the 1990s, Sullivan reports, but "development of strong democratic institutions didn't keep pace." He spoke with Chiang Mai University's Paul Chambers, who said Bhumibol was more focused on maintaining order:

"This was not a king bent on developing democracy, I think his main interest was ensuring that order would prevail and that it would be an order that would ensure the durability of the monarchy, A powerful monarch in alliance with a military that would stand above parliamentary democracy."

The beloved king's death raises concerns about the future of the Thai monarchy. Bhumibol was far more popular than his son and heir apparent, 64-year-old crown Prince Vajiralongkorn.

NPR's Greg Myre explained that this has raised "questions about what role the monarchy will play this time and in the future." 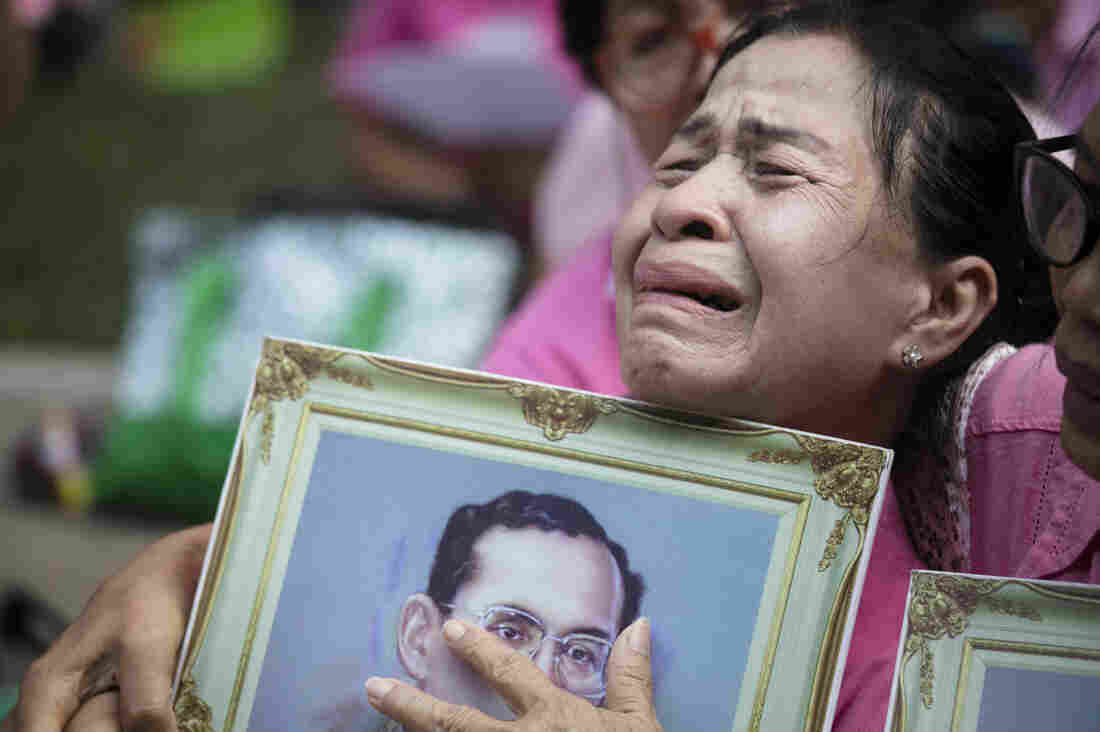 A Thai woman cries as she prays for Thailand's King Bhumibol Adulyadej on Thursday outside Siriraj Hospital, where he was being treated, in Bangkok. Wason Wanichakorn/AP hide caption

Thai Prime Minister Prayuth Chan-ocha said in a speech to the nation Thursday that "an heir to the throne had been designated since 1972 and that the government would inform parliament of the choice," according to Reuters. He did not specifically name Vajiralongkorn, who was designated crown prince in 1972.

Chan-ocha said that "civil servants would observe mourning for a year," according to Reuters. He called upon Thais "to refrain from 'festivities' for 30 days."

Most Thais have never known any other king. Crowds had gathered outside the Siriraj Hospital on Thursday to pray for the ailing monarch. Some clutched framed photos of the king.

Among the group outside the hospital was Parichart Kaewsin, who spoke with Reuters after the palace announced the king had died. "I knew he was sick, but I still can't believe this day has come," she told the wire service. "That's why I came here — to hear it for myself. ... He was like our dad."

Others expressed their grief on social media:

You are the one on my heart who have taken care of all people in Thailand. I Love you my KING. You'll be on our heart forever #ThaiKing

U.N. Secretary-General Ban Ki-moon highlighted Bhumibol's "long dedication to his country and his legacy as a unifying national leader" in a statement from his spokesman. "He was revered by the people of Thailand and highly respected internationally."

You can listen to Sullivan's obituary of Bhumibol from Morning Edition here: