Accessibility links
NFL's Conduct Policy In Spotlight Again Over Kicker Josh Brown's Admitted Spousal Abuse : The Two-Way After New York Giants kicker Josh Brown was arrested for assaulting his wife in 2015, the NFL investigated and suspended him — for one game. But newly released documents show a history of abuse. 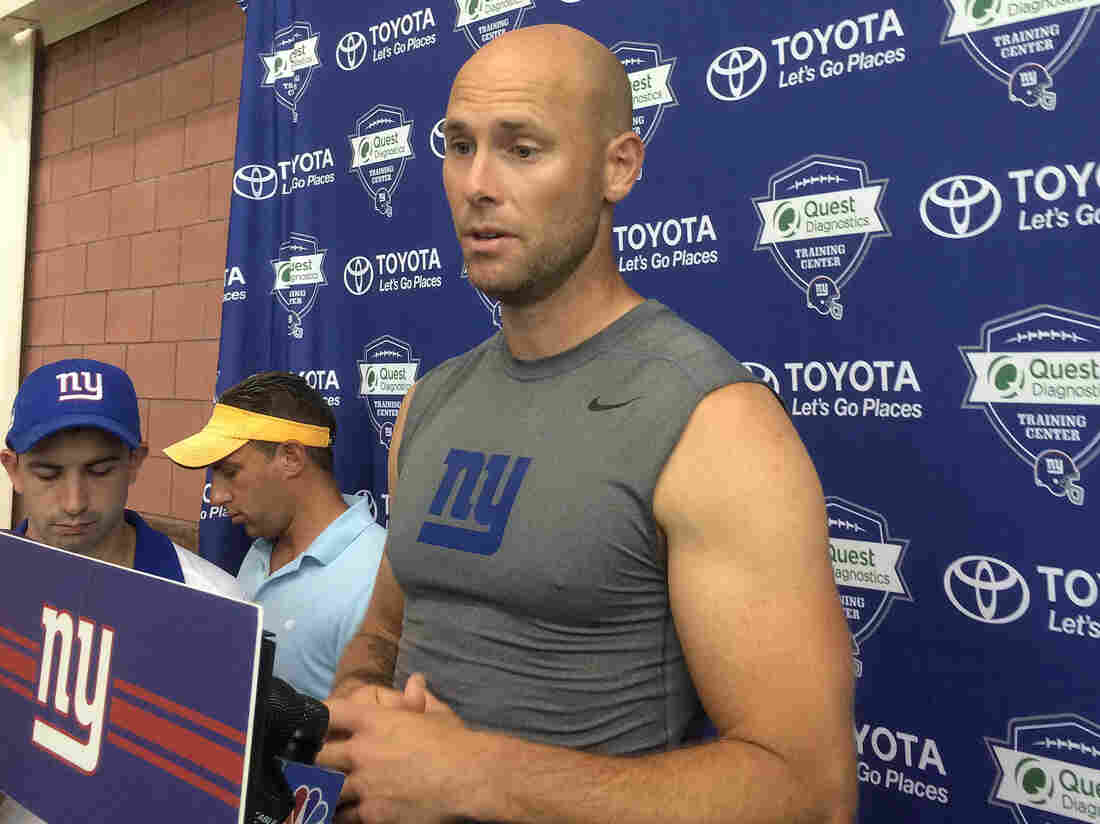 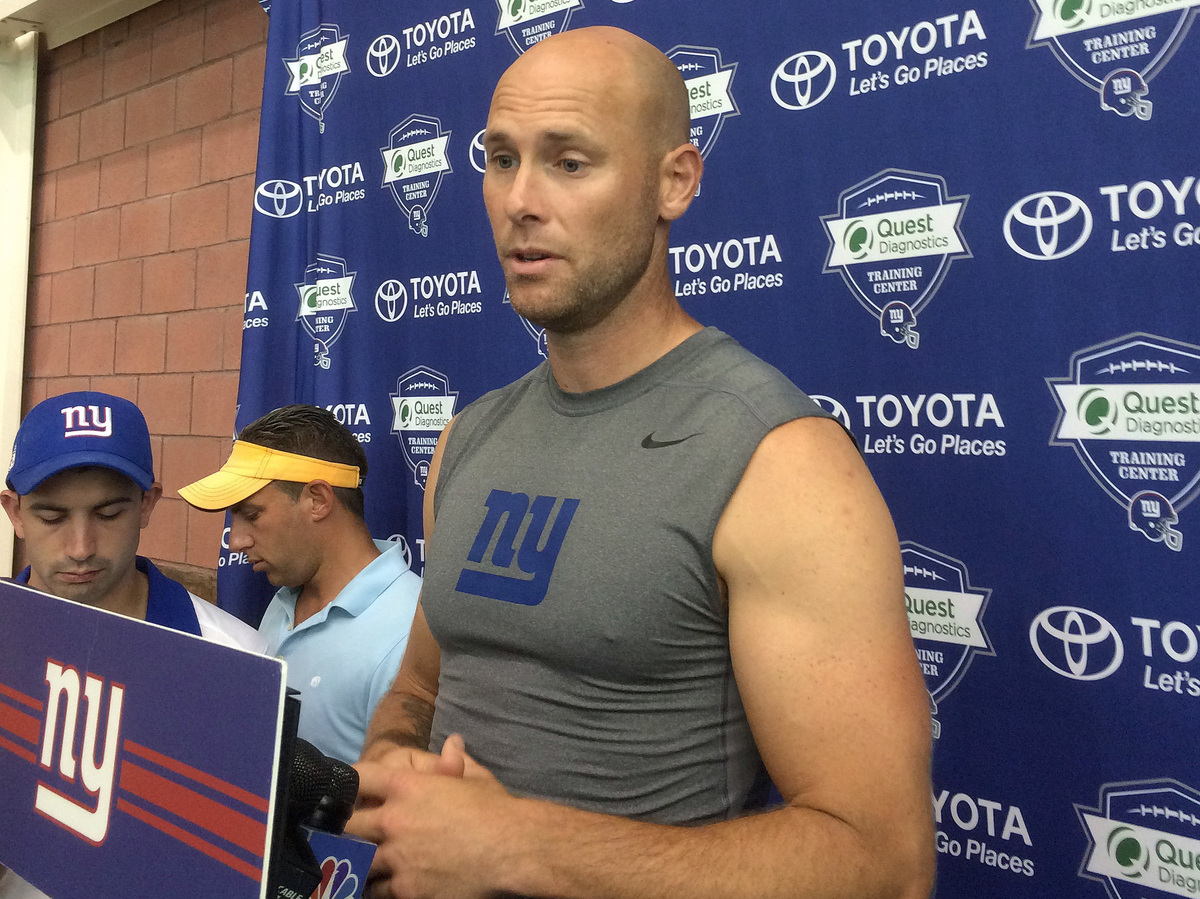 The NFL's New York Giants are heading to London for a game against the Los Angeles Rams this Sunday, without their All-Pro kicker Josh Brown.

The decision to leave Brown behind comes after new information emerged in a year-and-a-half-old domestic violence case. And suddenly, there are new questions about whether the league adheres to its supposedly tougher policy against domestic violence.

In May 2015, Brown was arrested for assaulting his then-wife Molly at their home in Washington state. Brown wasn't charged.

The league conducted its own investigation to determine whether Brown had violated the NFL's Personal Conduct Policy. That policy allows "for discipline to be imposed even when criminal charges are not presented."

The policy was toughened after the Ray Rice scandal in 2014. NFL Commissioner Roger Goodell wrote the following in a letter to team owners in August of that year:

"Effective immediately, violations of the Personal Conduct Policy regarding assault, battery, domestic violence or sexual assault that involve physical force, will be subject to a suspension without pay of six games for a first offense, with consideration given to mitigating factors as well as a longer suspension when circumstances warrant."

In August of this year, the league announced in a statement that "Mr. Brown had violated the Personal Conduct Policy." And then suspended him.

A Year On, Did NFL Anti-Domestic Violence Efforts Work?

"I have physically abused my wife."

Brown served his suspension, and since then, he's been one of this season's best kickers, making 11 of 12 field goals and all nine of the Giants' points after touchdowns.

But now Brown's season is in limbo, as new revelations are prompting questions about the Giants' and the NFL's handling of the case.

Wednesday night, law enforcement officials in Washington state released documents that included an admission by Brown that he had abused his wife.

One document was titled, "Josh Brown – Contract for Change." It was dated March 28, 2013, more than two years before his assault arrest; it was drafted as part of marriage counseling he was then undergoing.

"I have physically, verbally and emotionally abused my wife Molly."

"I have controlled her by making her feel less human than me, and manipulated her with money."

"I have constantly made her feel as if she is not good enough for me to hide my own insecurities and self hate."

Brown's admission prompted this statement from the NFL on Thursday: "In light of the release of these documents we will thoroughly review the additional information and determine next steps in the context of the NFL Personal Conduct Policy."

The NFL's actions with Brown are reminiscent of how it handled Rice's notorious case two years ago, when the league responded to the first reports of Rice's elevator assault on his then-fiancee with a two-game suspension.

Later, explosive security camera video emerged of the Baltimore Ravens running back knocking out his fiancee with a hard cross to her jaw and dragging her unconscious from the elevator. Rice was released by his team, then banned indefinitely from the NFL before being reinstated. No team has signed him since.

Which raises the question why Brown was suspended for only one game.

Who knew what, when?

The Brown case raises the same questions that surrounded the Rice scandal: about what the NFL — and the player's team — knew about the player's conduct.

The NFL didn't respond to NPR's request for an interview on Thursday. But in a statement, the league said this:

"NFL investigators made repeated attempts — both orally and in writing — to obtain any and all evidence and relevant information in this case from the King County [Washington] Sheriff's Office. Each of those requests was denied and the Sheriff's Office declined to provide any of the requested information, which ultimately limited our ability to fully investigate this matter. We concluded our own investigation, more than a year after the initial incident, based on the facts and evidence available to us at the time and after making exhaustive attempts to obtain information in a timely fashion. It is unfortunate that we did not have the benefit or knowledge of these materials [the documents released Wednesday] at the time."

A spokesperson for the King County Sheriff's Office, Sgt. Cindi West, says someone requested documents in May 2015, shortly after Brown's arrest, but didn't initially identify himself as an investigator for the NFL. West said in any event the information was withheld because the investigation into Brown was "open and active."

The NFL acknowledges it learned in the course of its investigation that Molly Brown made allegations of other instances of abuse by her then-husband.

And West says the NFL did receive a number of documents in August of this year, which included the transcript of a lengthy interview Brown's wife gave investigators shortly after the incident, in which she alleged at least 20 instances of abuse over several years.

But the NFL says Molly Brown declined to speak with league investigators, and thus they had "insufficient information" to corroborate her allegations.

However, on Thursday, New York Giants co-owner John Mara told radio station WFAN New York that Brown "certainly admitted to us that he abused his wife in the past."

And Mara said he knew of an incident at the January 2016 Pro Bowl in Hawaii — the NFL's all-star game — when the NFL reportedly had to help Molly Brown and her three children find a different place to stay after she felt threatened by her husband at the player's hotel.

The Giants re-signed Brown to a two-year, $4 million contract this spring. According to USA Today, Mara said the team never spoke to Molly Brown before re-signing Josh.

"In light of the news reports regarding the documents released by the State of Washington yesterday, we think it makes sense to review this newly disclosed information and to revisit this issue following our trip to London. The Giants do not condone or excuse any form of domestic violence. Josh has acknowledged that he has issues in his life and has been working on these issues through therapy and counseling for a long period of time. We remain supportive of Josh and his efforts."

West of the King County Sheriff's Office said Thursday that charges were never brought against Brown because his wife "is uncomfortable testifying." West says that's not uncommon in domestic violence cases.

"What I'm comfortable saying on her behalf," says West, "is that her children are her priority. She knows this case is going to get a lot of public attention, and she wants to keep her children's lives as normal as possible. That's one of the reasons she decided not to testify."

But left unanswered is whether the case of Josh Brown serves as an indictment of a league that appeared to learn its lesson two years ago, but in fact didn't.