Accessibility links
California Tour Bus Crash Kills At Least 13 : The Two-Way A California Highway Patrol official says at least 13 are dead and more than 30 injured after a bus struck the back of a tractor-trailer near Palm Springs, Calif.

Tour Bus Crashes Into Truck, Killing More Than A Dozen People In California

Tour Bus Crashes Into Truck, Killing More Than A Dozen People In California 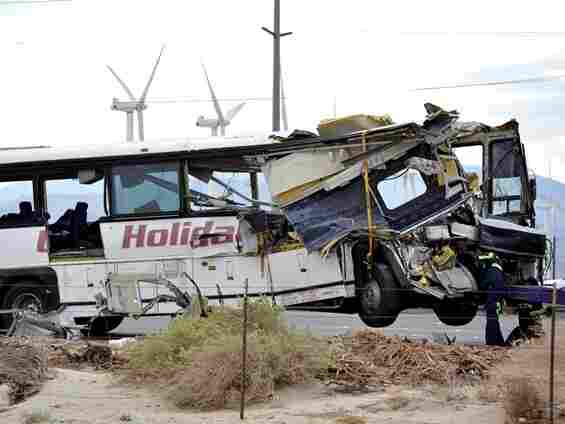 Workers prepare to haul away a tour bus that crashed with semi-truck on Interstate 10 near Palm Springs, Calif., Sunday. The crash killed at least a dozen people and injured at least 30 others, some critically, the California Highway Patrol said. Rodrigo Pena/AP Photo hide caption 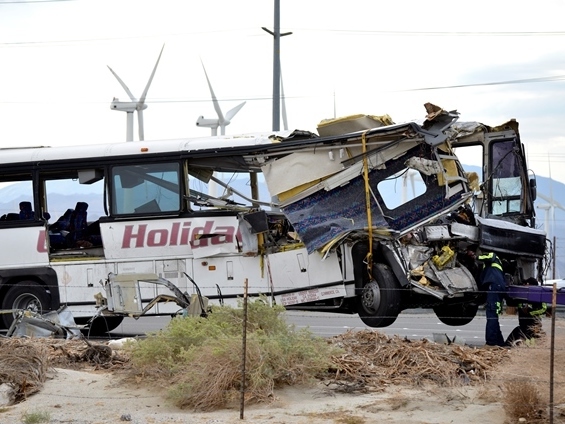 Workers prepare to haul away a tour bus that crashed with semi-truck on Interstate 10 near Palm Springs, Calif., Sunday. The crash killed at least a dozen people and injured at least 30 others, some critically, the California Highway Patrol said.

A tour bus and tractor-trailer collided outside of Palm Springs, Calif., early on Sunday morning, injuring dozens of people and killing at least 13 passengers.

At a press conference on Sunday afternoon, the chief of the local California Highway Patrol division said the bus collided into the back of the truck so forcefully that it traveled some 15 feet into the truck's trailer.

The bus driver was among the dead, Chief Jim Abele said, and he said it was probable that most of the other victims had been in the front of the bus. Not all of the deceased passengers have been identified.

Abele said that maintenance work on the highway had caused traffic to slow down some as the bus and the truck were traveling towards Los Angeles, shortly after 5 a.m. but not so much that the truck in front was impeding traffic.

More than 30 people were injured in the crash and sent to local hospitals. A spokesman for the Desert Regional Medical Center, the region's trauma center, told NPR the hospital had received 14 patients, five of whom were in critical condition.

Other nearby hospitals are treating patients with less serious injuries.

The Desert Sun reports that the driver of the semitrailer was uninjured in the crash. The newspaper has more details from the scene of the crash on I-10:

"Throughout the morning, firefighters struggled to reach victims. The bus had crashed into the big rig's trailer, and a tow truck was used to lift the trailer and help officials gain easier access to the demolished vehicle. Another tow truck tried to pull the big rig forward, off the bus. Firefighters positioned ladders in the bus' windows to pull victims out. ...

"The tour bus belonged to USA Holiday, a Los Angeles-based tour company, and Hamilton said the driver was identified as one of its owners. The bus was carrying about 30 people and may have been coming from Red Earth Casino, near the Salton Sea, CHP said."