Accessibility links
Pope Francis Meets With Venezuelan President To Discuss Country's Crisis : The Two-Way The pope urged President Nicolas Maduro to "alleviate the suffering of the people" amid Venezuela's economic and political disaster. The Vatican will mediate between the government and the opposition. 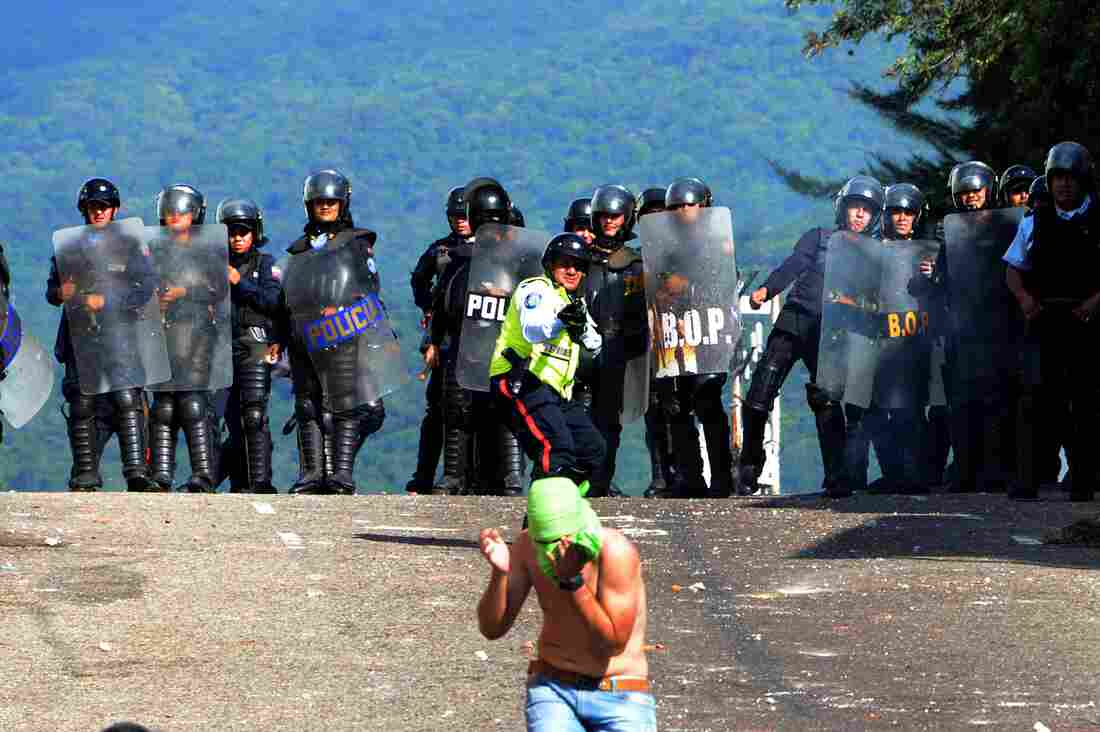 Pope Francis met with the president of Venezuela on Monday for a private conversation about that country's acute political and economic crisis, as the Vatican announced it would be mediating a meeting between Venezuela's government and the opposition.

A statement from the Holy See, as translated by Catholic News Agency, said the pope encouraged President Nicolas Maduro "to undertake with courage the path of sincere and constructive dialogue" and "to alleviate the suffering of the people — first of all, those who are poor."

"It's one of the epic economic collapses of our time," the Planet Money team wrote. "And it was totally avoidable."

The economic disaster has led to a political crisis, as well.

Maduro, widely blamed for the failing economy, is deeply unpopular — polls estimate that three-fourths of his citizens want to see him leave office this year, The Associated Press reports. Mass protests in September saw thousands of demonstrators calling for the socialist president's recall.

PHOTOS: Venezuelans Take To The Streets In Protest Against The Government

But earlier this month, authorities halted the drive to hold a recall election. The decision, a major blow to the opposition, means Maduro could remain in office through 2019.

John Otis, reporting for NPR earlier this week, noted that prominent opposition leaders have been jailed and the government has stripped the country's Congress — controlled by the opposition — of most of its powers.

A Venezuela expert told Otis that the cancellation of the recall drive is "a very significant step toward outright authoritarianism in Venezuela" — and that blocking off electoral options for the opposition could lead to violence.

This is the volatile situation into which Pope Francis has stepped, as he called for "trust between the various parties," as Catholic News Agency reported.

The meeting between the pope and the embattled president happened as Maduro was traveling back to Venezuela from a tour of the Middle East, The Associated Press reports.

After the meeting, a Vatican official announced that representatives of the government and the opposition would be meeting in a few days for a conversation mediated by the Vatican.

The AP has more on the reaction to the meeting between Francis and Maduro, and the planned talks between the two opposing political parties:

"It's not clear how much influence the Vatican will have in bringing the two sides together in a country that for almost two decades has been bitterly divided.

"As soon as the meeting was announced some of Maduro's most-prominent critics expressed dismay that hours after declaring itself in open rebellion and calling for a mass protest Wednesday the opposition alliance was now engaging with the government.

"Meanwhile, socialist strongman Diosdado Cabello was already accusing his opponents of using the dialogue as a smoke screen to hide its intent to violently force Maduro from power."

NPR's Sylvia Poggioli reported earlier this year that Pope Francis has established himself as a surprisingly vocal — and influential — player in international affairs, involving himself in debates over U.S. airstrikes in Syria, the European response to the refugee crisis and U.S.-Cuba relations, among other things.

"When he became pope, there was some concern that Francis lacked experience with the wider world," Sylvia wrote. "He had traveled little outside of his native Argentina, his pastoral experience was rooted in a metropolis, Buenos Aires, and its shantytowns, addressing problems of everyday life — poverty, migration and human trafficking.

"No one expected him to become a global player," Sylvia explained. "But Francis is also the first Jesuit pope. Over the centuries his religious order often waged its own diplomacy, acquiring extensive knowledge of other cultures. The training shows."