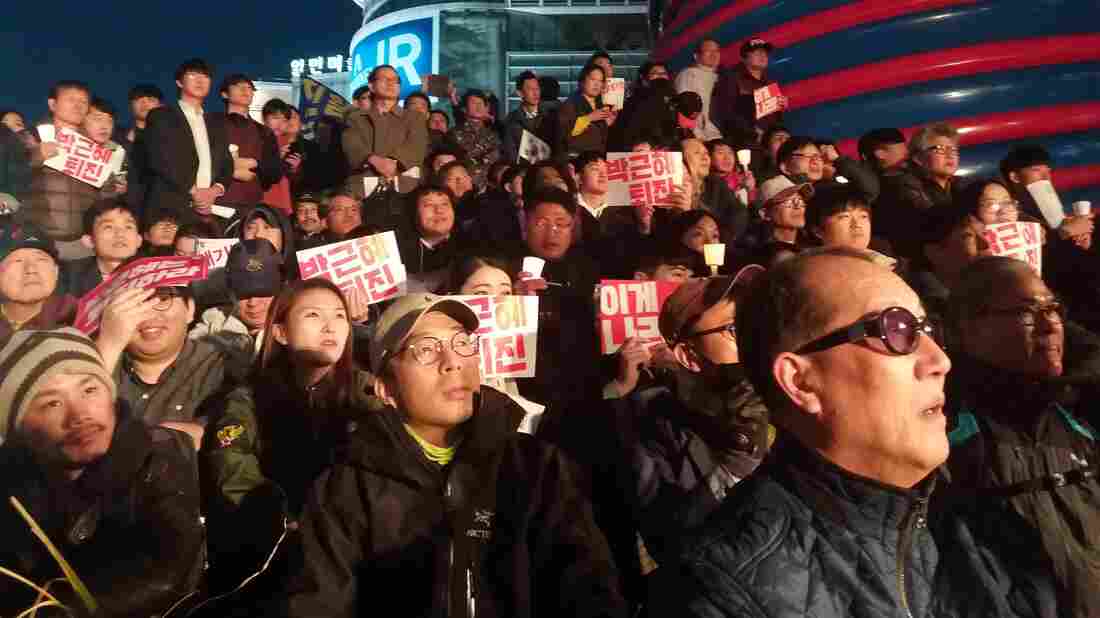 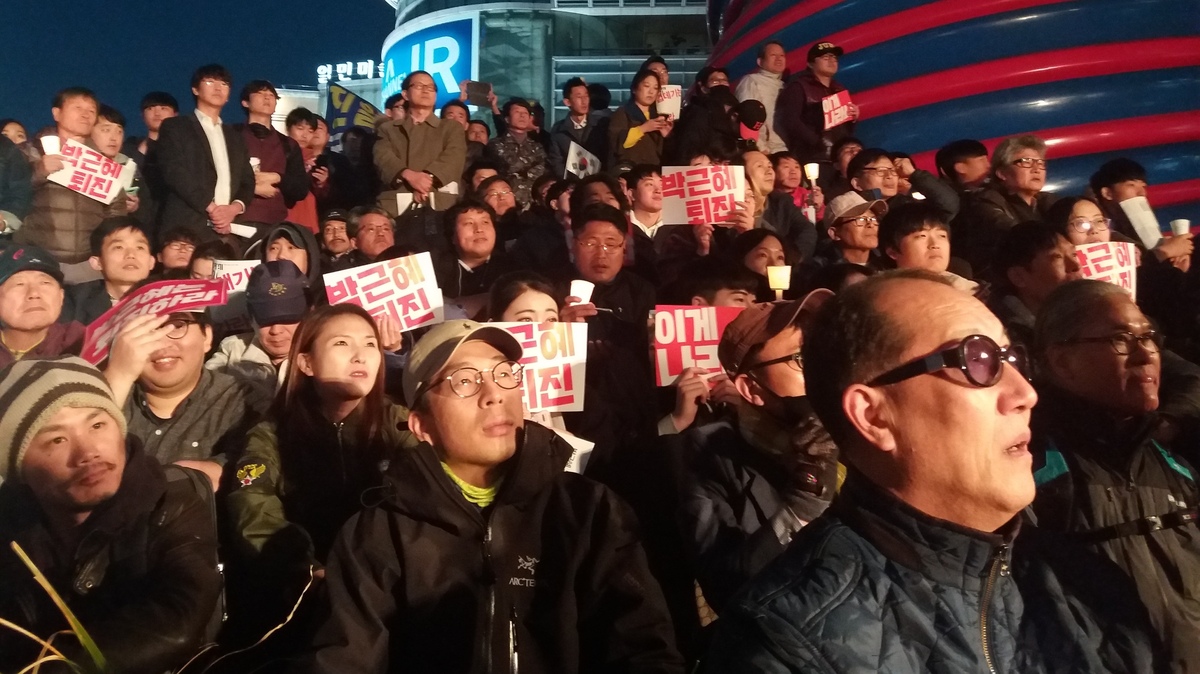 An estimated 10,000 demonstrators showed up near City Hall in Seoul on Saturday, calling for South Korean President Park Geun-hye's resignation.

Tens of thousands demonstrated in cities across South Korea on Saturday, demanding President Park Geun-hye step down from office. Her approval rating has hit an unprecedented low of 14 percent and Park's ordered all 10 of her senior aides to resign, following revelations an unelected, unappointed confidant was receiving advance copies and altering dozens of confidential policy speeches. They have led to charges that the friend is a secret "puppet master" and the real power behind "the throne."

President Park apologized to the country in a rare nationally-televised address this week. She said she sought her old friend's opinion only in the early part of her presidency, before her staff was in place. 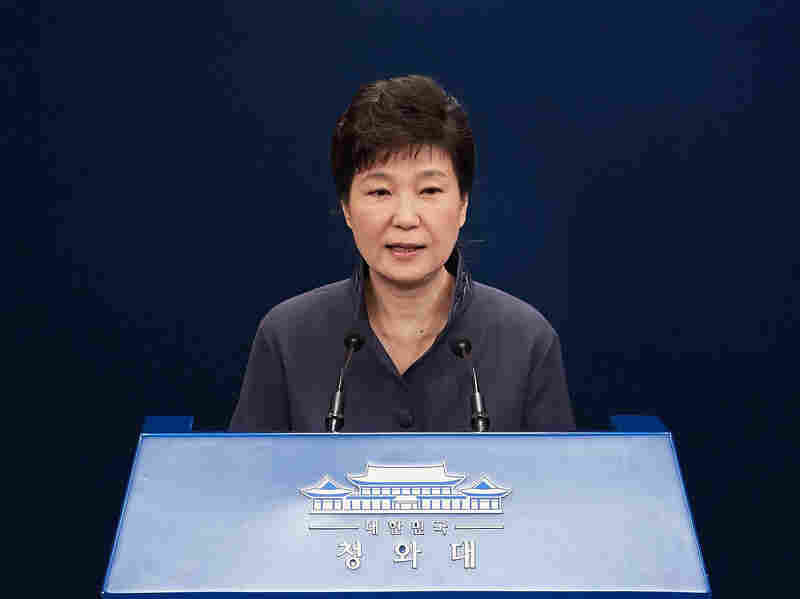 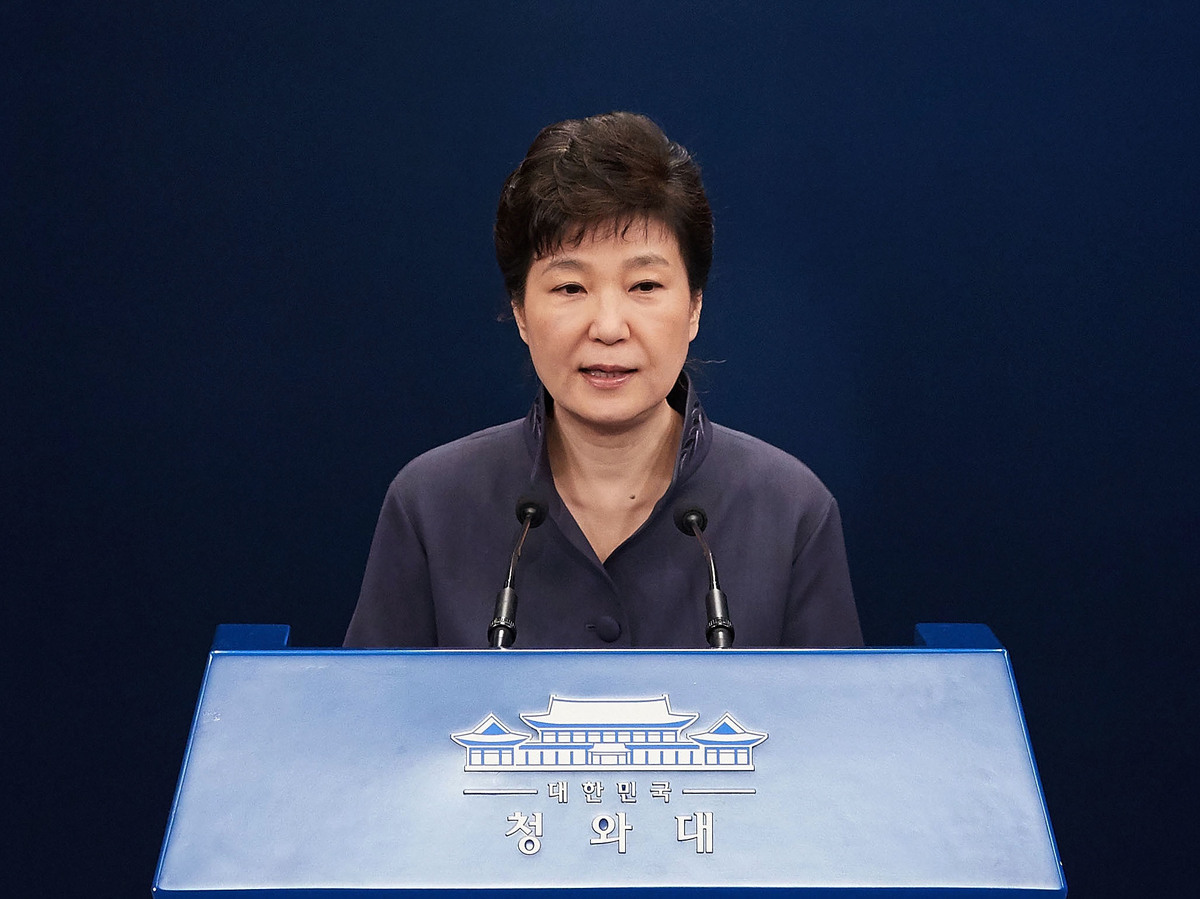 In this handout photo released by the South Korean Presidential Blue House, South Korea's President Park Geun-Hye offers a public apology at the at the presidential blue house on October 25.

It goes beyond tinkering with speeches, however. This scandal involves not only tens of millions of dollars and charges of influence-peddling, but of spiritual guides from a "Shamanistic prophet," voices from the dead and — wait for it — dressage, the competitive form of horse-dancing.

The old friend of the president's, Choi Soon-sil, also runs two non-profit foundations that prosecutors say boasted of its ties with the president to collect more than $70 million in donations from the country's major conglomerates. Prosecutors opened up an investigation into the foundations in early October, and are seeking Choi, who is accused of siphoning some of those funds for personal use — including to cover equestrian training for her daughter, Chung Yoo-ra. (Choi emerged in Germany over the weekend and denies any wrongdoing.)

Much of the pubilc anger now gripping the nation broke open over Choi's daughter in the first place. Chung, the equestrian, attended the nation's prestigious woman's college, Ewha University. Ewha's president was forced to resign this week as students protested Chung's preferential treatment and shady admission — which seemed to give her extra credit for being a champion dressage competitor. Media began looking closer at the ties between Park and Choi.

And the ties are interesting, indeed. Choi Soon-sil is the daughter of a man the president considered her mentor, Choi Tae-min. He claimed to be a pastor from a tiny pseudo-Christian sect, but a leaked diplomatic cable from the U.S. Embassy describes him as a 'Rasputin'-like character and his "church" is described by Korean media as more of a "Shamanistic cult." The New York Times explains further:

"Mr. Choi was the founder of an obscure sect called the Church of Eternal Life. He befriended Ms. Park, 40 years his junior, soon after her mother was assassinated in 1974. According to a report by the Korean intelligence agency from the 1970s that was published by a South Korean newsmagazine in 2007, Mr. Choi initially approached Ms. Park by telling her that her mother had appeared in his dreams, asking him to help her.

Mr. Choi was a former police officer who had also been a Buddhist monk and a convert to Roman Catholicism. (He also used seven different names and was married six times by the time he died in 1994 at the age of 82.) He became a mentor to Ms. Park, helping her run a pro-government volunteer group called Movement for a New Mind."

The public's beliefs about how much control the Choi family enjoyed over the president, and how much they privately benefited as a result, is putting the president's remaining year in office in serious jeopardy. On the streets of Seoul Saturday, at least 10,000 people showed up to protest, holding signs saying "Park Geun-hye, resign," "How is this a country?" and "We can't raise kids in this country!"

For her part, Park hasn't addressed the matter since her 90-second apology early in the week. But she did call for the en masse resignations of her senior staff late Friday night, and her spokesman is not ruling out changes at the heads of government agencies as part of this reshuffling.

The three major political parties in South Korea, meanwhile, say they will meet with the National Assembly speaker early next week to consider their next moves.

"Opposition parties share the responsibility about state affairs," the ruling party's floor leader, Rep. Chung Jin-suk, said to the Korea Joongang Daily. "Since the administration is hit with the leadership crisis, the National Assembly must act to cope with it."