Accessibility links
Protests, Arrests Follow The Horrifying Death Of A Moroccan Fishmonger : The Two-Way Moroccans rallied in the streets after a man was crushed to death while trying to recover his confiscated fish. His death has become a rallying cry for people who want to see justice in their country.

Protests, Arrests Follow The Horrifying Death Of A Moroccan Fishmonger

Protests, Arrests Follow The Horrifying Death Of A Moroccan Fishmonger 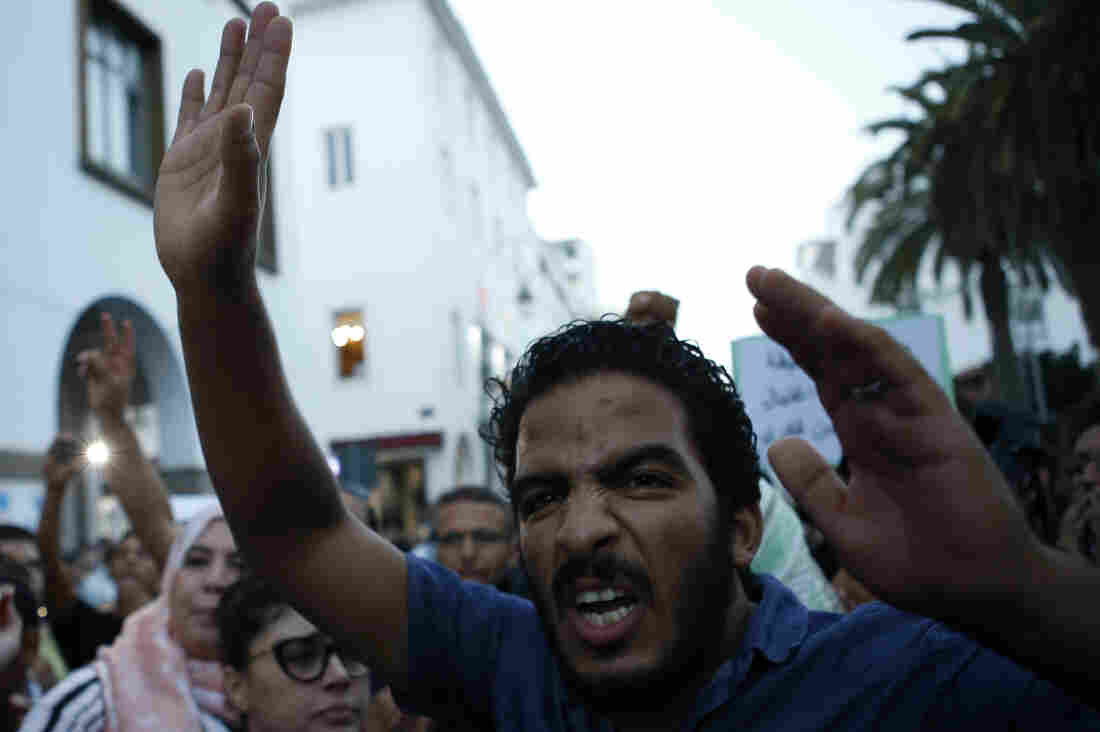 A Moroccan shouts as huge crowds in Rabat on Tuesday protest over a fishmonger's death in the northern city of al-Hoceima. Abdeljalil Bounhar/AP hide caption 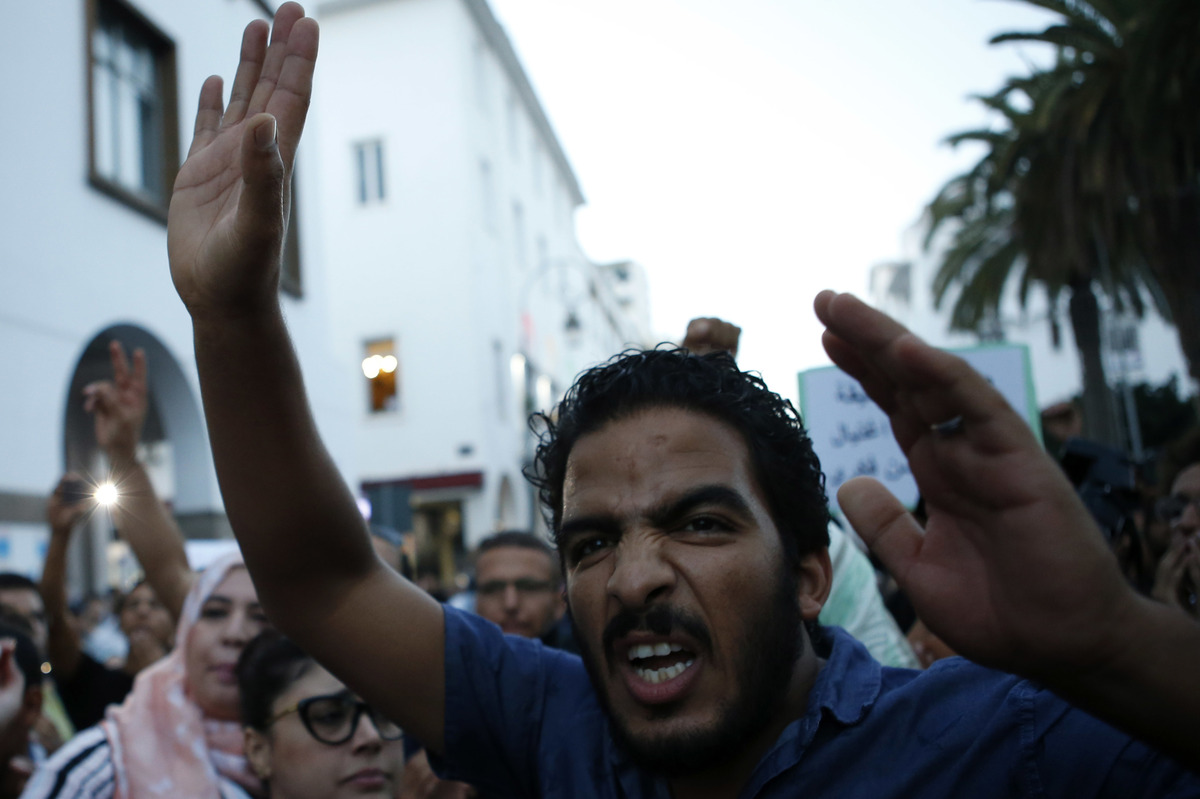 A Moroccan shouts as huge crowds in Rabat on Tuesday protest over a fishmonger's death in the northern city of al-Hoceima.

The violent death of a fish-seller sparked mass protests this weekend in Morocco — a rare show of dissent for the North African monarchy.

Now, Moroccan authorities have arrested 11 people in connection with fish-seller Mouhcine Fikri's demise on charges of "involuntary manslaughter and forgery of public documents," as the BBC reports.

NPR's Jane Arraf walks us through what happened to Fikri:

"Police in the northern town of al-Hoceima confiscated fish that was being sold by a 31-year-old man, Mouhcine Fikri. He was reported to be selling swordfish, which is protected from fishing this time of year. So according to local media reports, when police threw all of his fish into a garbage truck, he actually jumped in after it and he basically was crushed to death in the compactor."

Activists and witnesses "had said that a local police officer ordered the garbage truck driver to start the compactor and 'grind him' " — a phrase that later became a trending hashtag in the country, as The Associated Press reports. Grisly images of Fikri's body circulated widely online.

A statement from the prosecutor said that "there was no order (given) to assault the victim," the wire service adds.

Five local officials from the town where Fikri died were among those arrested, according to the BBC. The AP says that "the alleged forgery concerns the paperwork involved in destroying the fish."

"Mouhcine Fikri has become a metaphor for the little guy who is literally crushed by the system," Jane reports.

Morocco Boasts Stability, But Critics Say The Price Is High

His gruesome death and the subsequent protests have drawn comparisons to the death of Mohamed Bouazizi, the Tunisian fruit vendor who set himself on fire in 2010 after a humiliating encounter with a police officer. Bouazizi's death ignited protests in Tunisia that ushered in a pattern of mass demonstrations across the region now widely referred to as the "Arab Spring."

However, as Jane notes, the political landscape is very different today than it was almost six years ago. Now, people across the region look at conflict-torn places such as Iraq and Syria, Jane says, "and they see those countries being ripped apart and a lot of them are thinking, 'OK, things aren't so great here but it could get a whole lot worse.' "

Morocco, in particular, has been relatively stable compared with much of the region. Reporting from Morocco earlier this year, NPR's Leila Fadel explained why:

"It's not that Morocco wasn't touched by the Arab uprisings that swept through the region in 2011. Moroccans protested and demanded greater freedom.

"But in keeping with a trend throughout the Arab world, Morocco and other monarchies maintained tight control and the kings have all survived. In contrast, authoritarian leaders with no claims to royalty were ousted in Tunisia, Libya, Egypt, and Yemen, while Syria remains locked in a nasty civil war.

"Morocco's King Mohamed VI promised significant reforms, and the country now has a new constitution. Morocco had elections and the protests stopped." 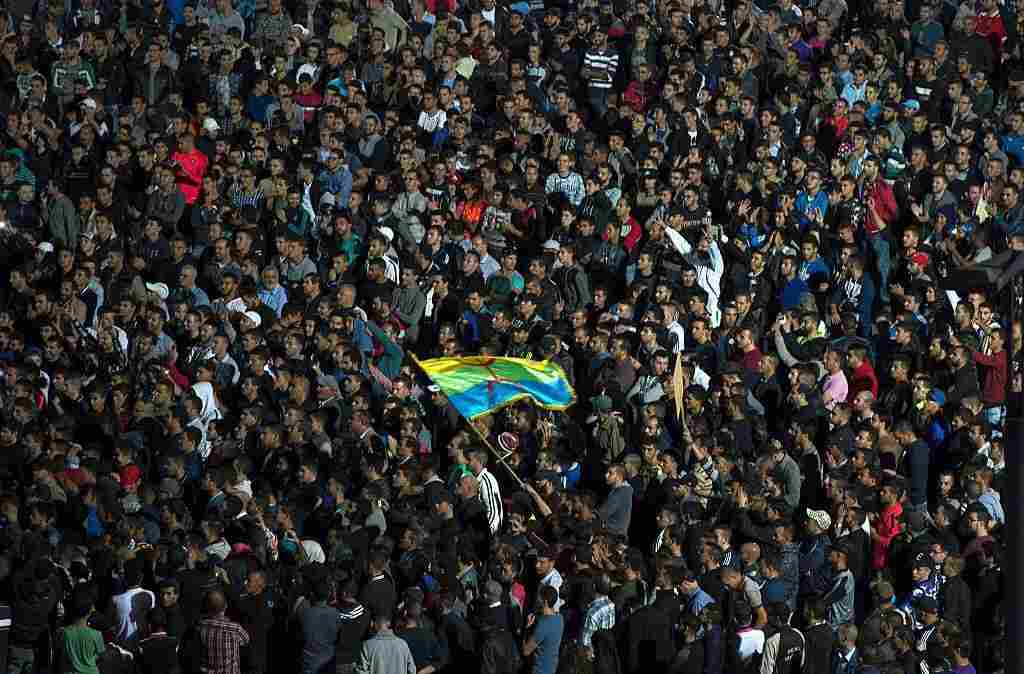 Protesters wave the Amazigh (Berber) flag as they shout slogans in the northern city of al-Hoceima on Sunday after the death of Mouhcine Fikri. Fadel Senna /AFP/Getty Images hide caption

At the same time, Leila noted that critics of the regime say that "the space for freedom of expression is at an all-time low."