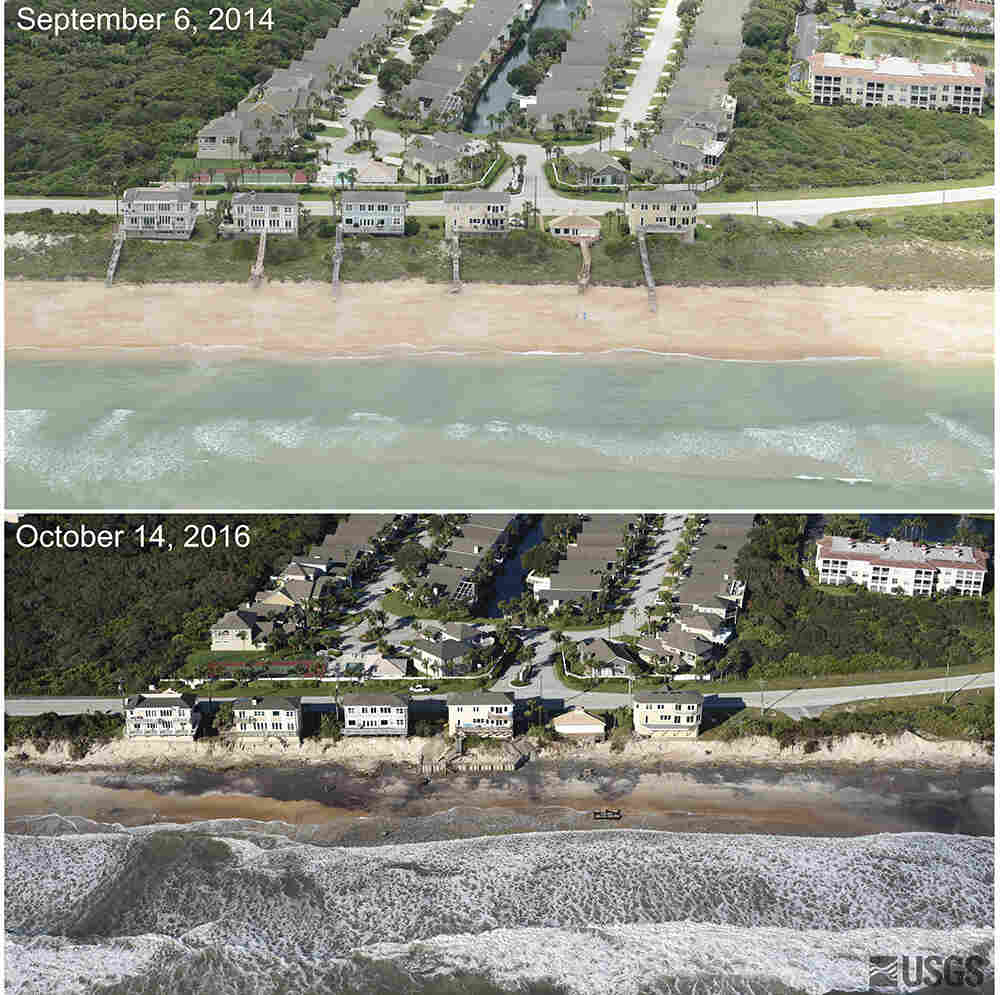 Photos taken before Hurricane Matthew (Sept. 6, 2014) and after (Oct. 14, 2016) show that the storm washed away a 16-foot sand dune, destroying boardwalks and decks and exposing a seawall at Vilano Beach, Fla. USGS hide caption

Beaches in the Southeastern U.S. took a tremendous beating last month from Hurricane Matthew. The U.S. Geological Survey has found that the storm washed over and damaged 15 percent of sand dunes on Florida's Atlantic Coast, 30 percent along Georgia's coastline and 42 percent of the dunes on South Carolina beaches.

In Florida, few coastal areas were hit harder by the hurricane than the 18 miles of dunes and beaches in Flagler County. County Administrator Craig Coffey says, "What Matthew did to us essentially [was] eat about 30 feet of coastline all the way along the county, and created a bunch of breaches through that dune system."

Matthew also washed out a big chunk of coastal highway A1A in Flagler Beach. The state and county are working to have that road repaired and open within 45 days. Fixing that highway is important, Coffey says. But he is equally worried about damage to the county's beaches and dunes, which provide the community with important protection from tides, wave action and storm surge.

When Hurricane Matthew overtopped and breached Flagler County's beaches, some 800 homes were flooded. Coffey says, "We're trying to figure out how can we protect those for next hurricane season so we don't have more breaches. We literally were fighting breaches in about 10 locations." Flagler County is hoping federal money will be available to help it begin restoring the dunes, which provide protection for hundreds of coastal homes. 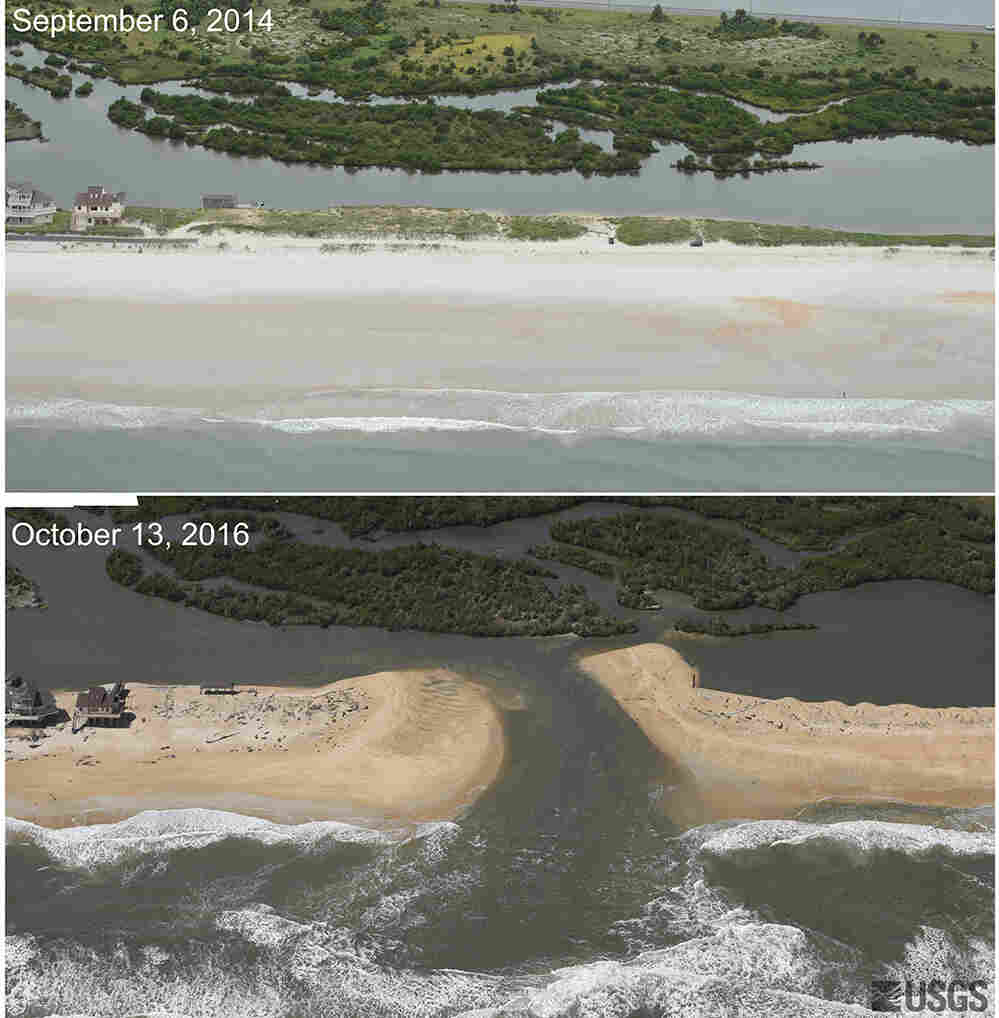 Photos taken before Hurricane Matthew (Sept. 6, 2014, above) and after (Oct. 13, 2016, below) show that the storm cut a new inlet between the Atlantic Ocean and the Matanzas River near St. Augustine, Fla., stripping away a 12-foot dune and carrying sand into the estuary. USGS hide caption 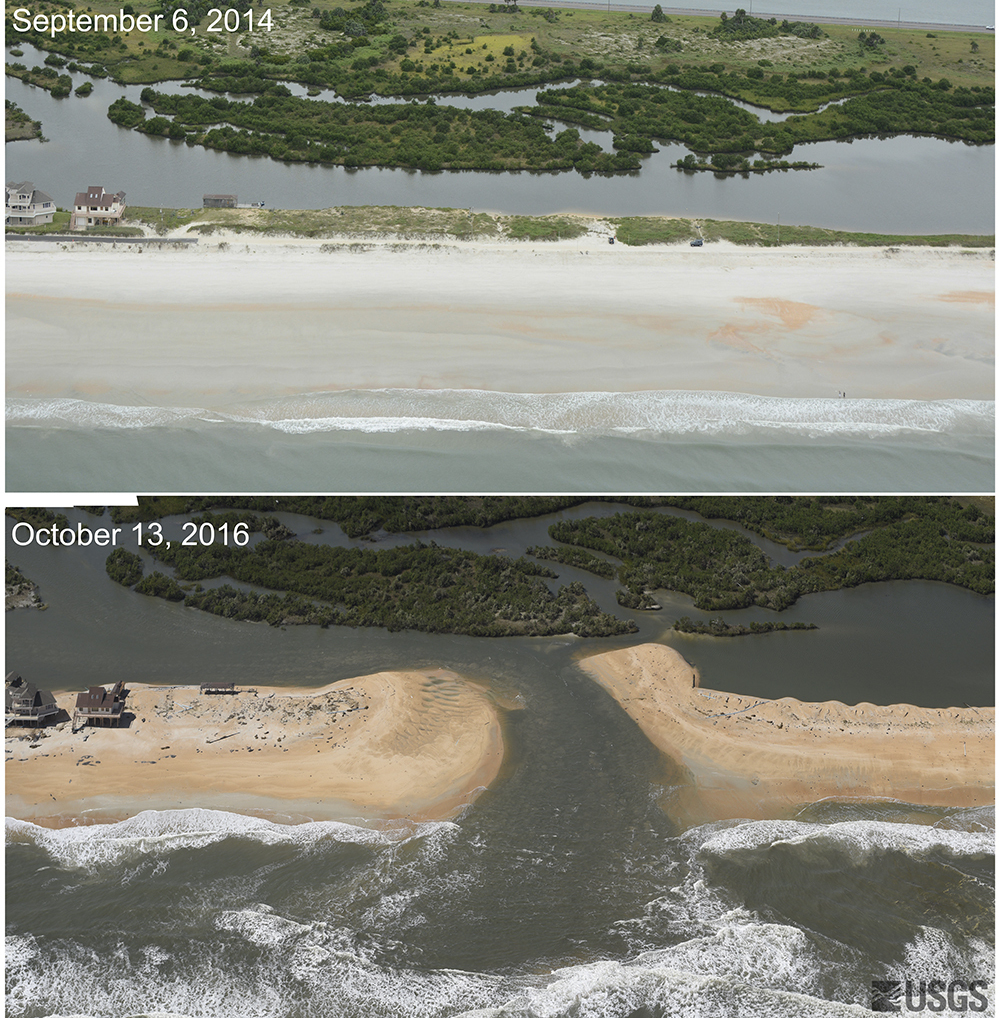 Photos taken before Hurricane Matthew (Sept. 6, 2014, above) and after (Oct. 13, 2016, below) show that the storm cut a new inlet between the Atlantic Ocean and the Matanzas River near St. Augustine, Fla., stripping away a 12-foot dune and carrying sand into the estuary.

Hilary Stockdon, a research oceanographer at USGS, says a survey of the beaches compared aerial photos taken before and after the storm. It showed extensive beach erosion all along the Southeast Atlantic coast, Stockdon says, "where waves removed sand from beaches and sharply eroded sand dunes. There were locations where houses were undermined or roads were undermined. And we also saw locations where the sand was pushed inland."

After small storms, Stockdon says, beaches and dunes can recover naturally. With major storms like Hurricane Matthew, though, sand is washed inland and bulldozed away, she says. Restoring sand dunes after those events often requires big engineering projects.