Accessibility links
Dakota Access Pipeline: Obama Says Army Corps Is Examining Alternate Routes : The Two-Way "There's an obligation for authorities to show restraint" in their handling of people protesting the Dakota Access Pipeline, President Obama said in an interview with the news organization Now This. 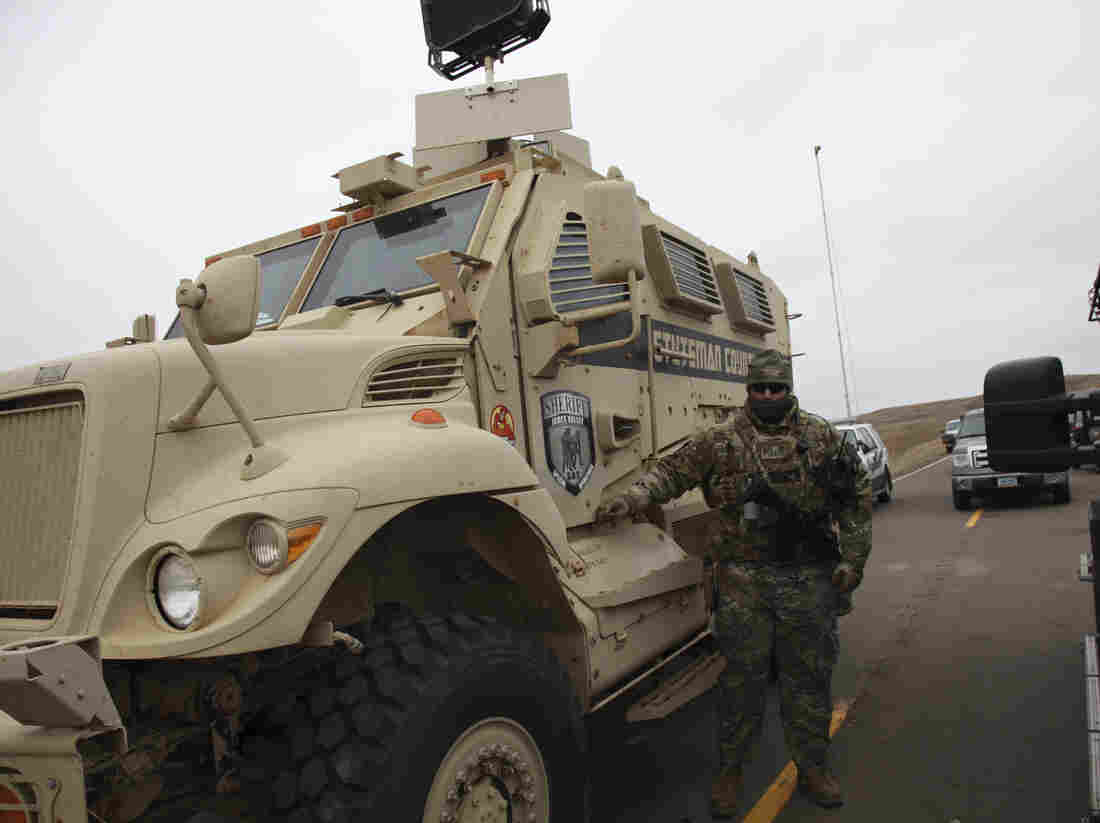 A member of the Stutsman County SWAT team who declined to give his name nor to be identifiable by badge stands guard by an armored personnel carrier equipped with an LRAD, or long range acoustic device, while deployed to watch protesters demonstrating against the Dakota Access Pipeline. John L. Mone/AP hide caption 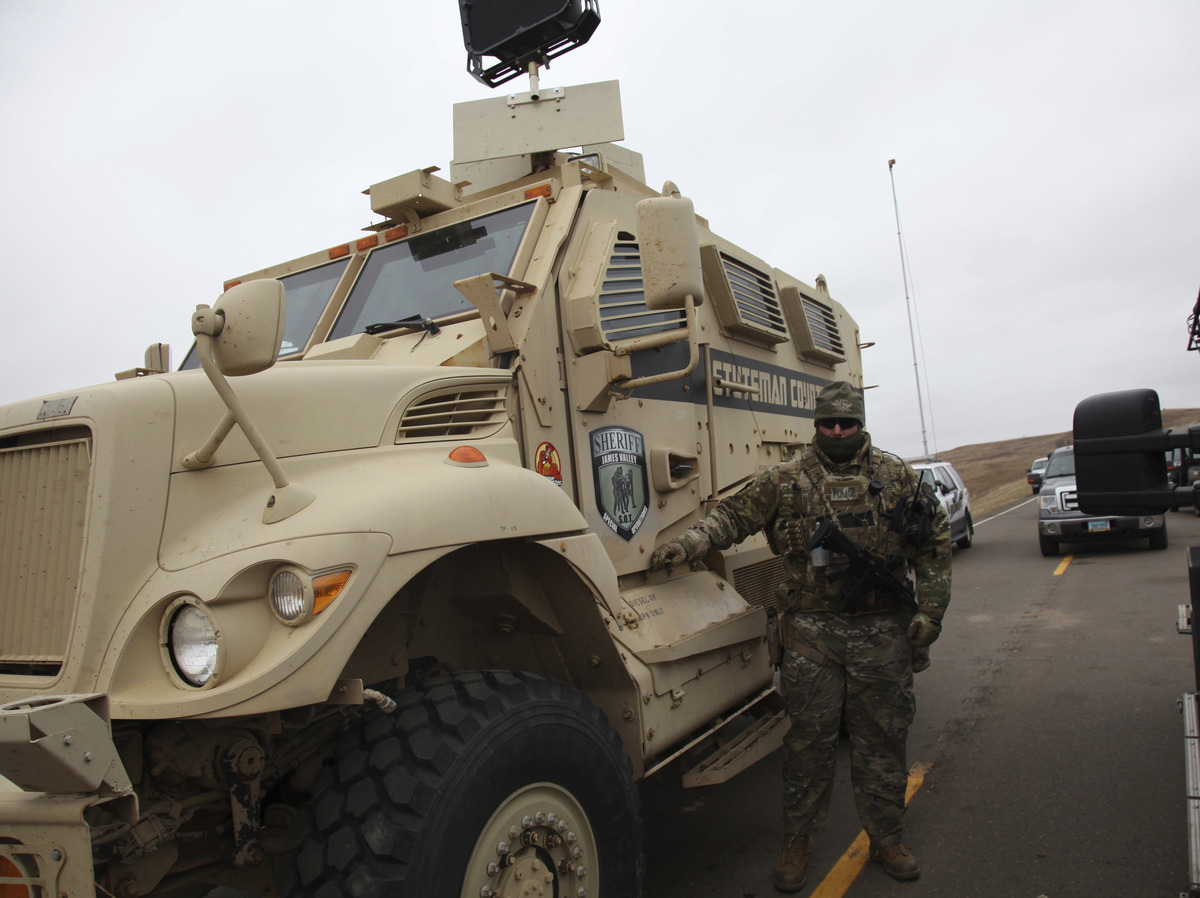 A member of the Stutsman County SWAT team who declined to give his name nor to be identifiable by badge stands guard by an armored personnel carrier equipped with an LRAD, or long range acoustic device, while deployed to watch protesters demonstrating against the Dakota Access Pipeline.

Protesters have been occupying land along the current pipeline route near the Standing Rock Sioux Reservation in North Dakota. A federal judge has ruled that work on the four-state pipeline can go forward, but the Corps and two other agencies said work would not go forward in an area particularly sensitive to the tribe until a review was completed.

"We're monitoring this closely and I think, as a general rule, my view is that there's a way for us to accommodate sacred lands of Native Americans," Obama said in an interview with the news organization Now This.

"I think right now the Army Corps is examining whether there are ways to reroute this pipeline in a way. So we're going to let it play out for several more weeks and determine whether or not this can be resolved in a way that I think is properly attentive to the traditions of the first Americans."

In a response to the president's statement, the chairman of the Standing Rock Sioux, Dave Archambault II, said, "We believe President Obama and his administration will do the right thing."

Morton County Chairman Cody Schulz said in a statement that he did not agree with the president's decision to let the situation play out:

"Rather than creating further uncertainty, the President should be sending us the support and resources necessary to enforce the law and protect people's right to peacefully protest."

Following the president's remarks, Vicki Granado, spokeswoman for the pipeline company, Energy Transfer Partners, said in a statement, "We are not aware that any consideration is being given to a reroute, and we remain confident we will receive our easement in a timely fashion."

The easement refers to permission from the Corps to begin construction on the portion of the pipeline that would cross under the Missouri River.

Members of the Standing Rock Sioux tribe and their supporters are specifically trying to block that section of pipeline because, they say, the route interrupts sacred sites and burial places. Tribe members are also concerned that if the pipeline ruptures, an oil spill could pollute drinking water, as The Two-Way has reported.

In his statement, Archambault called on the Obama administration to stop all work on the pipeline until the Corps was finished "examining this issue."

Last week, police arrested more than 100 people as officers evicted demonstrators from land owned by the pipeline company. As we reported, some of the officers were in riot gear, some were armed, and they arrived with soldiers driving trucks and military Humvees. They also deployed helicopters and an airplane to monitor from above.

The Federal Aviation Administration is restricting flights over the area until at least Nov. 5.

Archambault has called on the Department of Justice to investigate what he called the "overall militarization of law enforcement response" in a letter to U.S. Attorney General Loretta Lynch.

Asked what he thought about the law enforcement response, Obama said Tuesday that it's a "challenging situation."

"I want to make sure that, as everybody is exercising their constitutional rights to be heard, that both sides are refraining from situations that might result in people being hurt."

In an apparent effort to confuse police, more than 1 million people have tried to make it appear that they are protesting in North Dakota by "checking in" at the protest camp on Facebook. The Morton County Sheriff's Department said in a Facebook post Monday afternoon that it "does not follow Facebook check-ins for the protest camp or any location."

NPR's Jeff Brady also reported Wednesday that authorities have charged a protester, Red Fawn Fallis, with attempted murder of a law enforcement officer after she allegedly fired a pistol three times as she was being arrested last week. According to an officer who witnessed the event, police did not return fire against the woman.

North Dakota Highway Patrol Capt. Bryan Niewind said he was nearby and was surprised no one was injured. "The only angle that gun could have been fired where there was no law enforcement is the angle it was fired. It wasn't because she was trying to aim away from law enforcement," he said.

If Fallis is found guilty, Jeff says, she faces a maximum penalty of 20 years in prison and a $20,000 fine.