Accessibility links
They've Waited A Long, Long Time For This: Veteran Chicago Cubs Fans Rejoice : The Two-Way Every Cubs fan on Earth has been waiting ... and waiting ... to see their team win the World Series. The longer they lived, the more patience they needed. But on Wednesday night, all was rewarded. 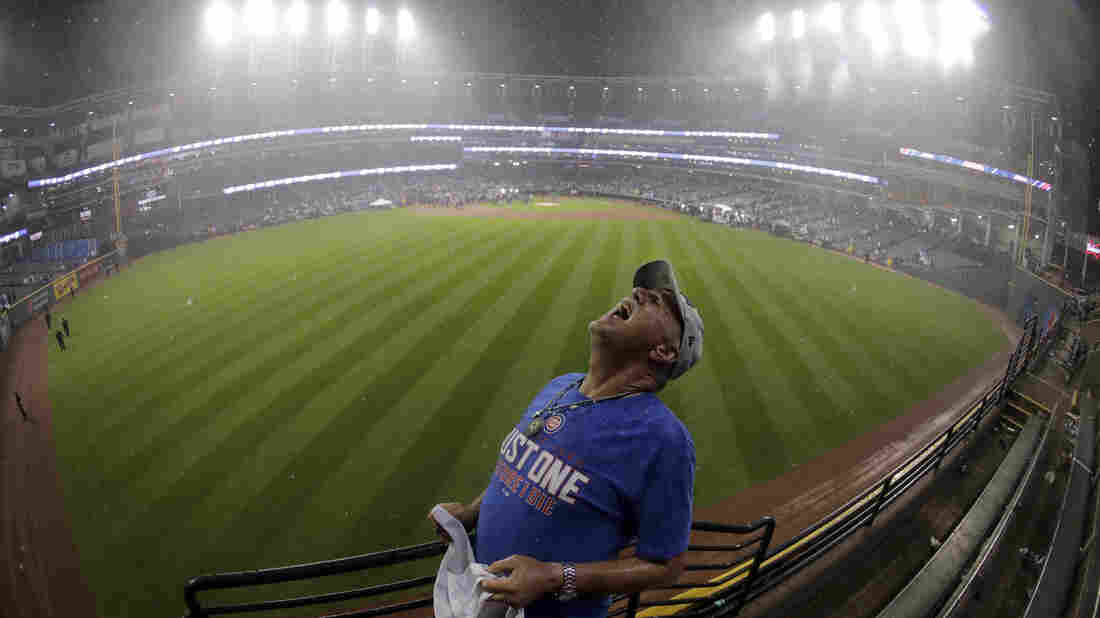 An unnamed Chicago Cubs fan catches raindrops in his mouth after the Cubs finally won the World Series on Wednesday. His shirt says, "Just one before I die." Charlie Riedel/AP hide caption 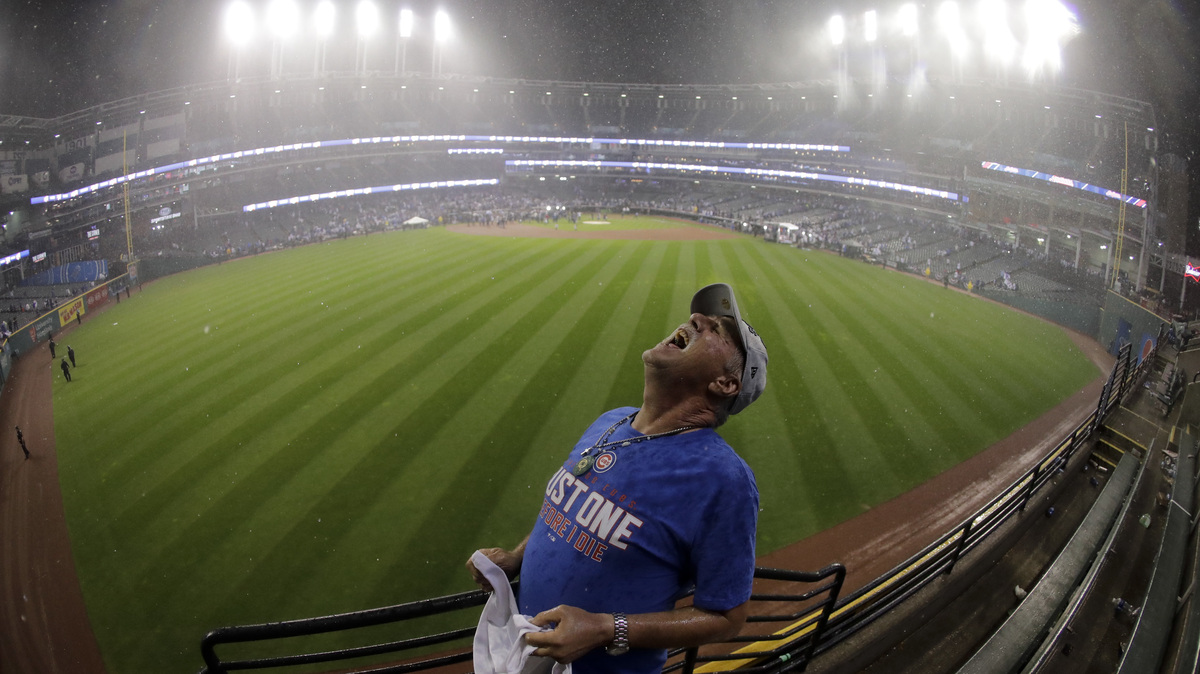 An unnamed Chicago Cubs fan catches raindrops in his mouth after the Cubs finally won the World Series on Wednesday. His shirt says, "Just one before I die."

The streets of Chicago erupted in cheers last night. Shouts of jubilation were raised in sports bars across the country.

And in comfy chairs in living rooms across America, the grandmas and grandpas and great-grandparents of Cubs Nation took to their feet, held their faces in shock, grabbed their telephones, collapsed into gleeful laughter and chugged champagne straight from the bottle.

All the Cubs fans on Earth have been waiting their whole lives for this. (Even those few fans who were alive for the last World Series win were too young to possibly remember it.)

94 year old grandma partying like it is 1908! #Cubs #WorldSeries pic.twitter.com/r7I0vgS1Oi

But the oldest fans have, of course, been waiting the longest — and on Wednesday night, as their patience was rewarded, their glee was shared with the world through the magic of social media.

Like these grandmothers, who just didn't think the Cubs could do it.

My grandmother the moment the @Cubs won the #WorldSeries @WaddleandSilvy pic.twitter.com/8TKimtopLf

Or this great-grandma, who was all laughter and applause, as her landline starts ringing off the hook.

Or this gentleman, whose glee — 81 years in the making — has gone viral.

One grandpa had been saving a special beer (long since gone funky) for the occasion.

my grandpa put this beer in his fridge 32 years ago and said he would open it when the cubs won the world series. today was that day. pic.twitter.com/LPsNMQZCpp

"Grandpa was 14 the last time the cubs were in the world series," one tweet read.

happiest men in the world❤️ grandpa was 14 the last time the cubs were in the World Series So happy I got to experience this w/ u 2 #FlyTheW pic.twitter.com/KkAilJAof7

(NPR has not independently confirmed the ages or team loyalties of any of the people pictured. But we think the joy speaks for itself.)

My grandma is literally the happiest Cubs fun.❤💙 pic.twitter.com/VDv9MPGSTp

Many senior Cubs fans went straight for the telephone to share the moment.

Others shared the victory with loved ones who were gone. (On a similar note, many Cubs fans were chalking the names of those who didn't live to see this day onto the walls of Wrigley Field, so they could share in the moment. And at least one fan listened to the game in a cemetery, to share the moment with his father.)

Til this day my grandma and grandpa have always been role models to me for love.... (& true cubs fans) 😂❤️💙 pic.twitter.com/Vj0omtwlrn

There were matching shirts and smiles.

71 yrs ago my grandfather sat in Wrigley Field watching the @Cubs in the 1945 #WorldSeries tonight at 93 he witnessed his team #FlyTheW pic.twitter.com/5BbqpgF3ef

There were Cubs hats galore.

99 years old on Saturday - Go @Cubs - Grandma got to see it! pic.twitter.com/yv3bSQcONV

There was celebratory drinking.

And mostly, there was glee — decades and decades in the making.

my grandpa's best friend is 95 years old and has been waiting literally his entire life for the cubs to win and I AM SO HAPPY FOR HIM! pic.twitter.com/98f18GvorJ

Twitter user @harleelwt shared two videos of his grandpa — before and after victory.

At the top of the 10th, he has his hands over his eyes, asking, "Are the bases loaded?" When told they are, he says, "Holy cow."

my grandpa is the absolute cutest. Please Cubs win for him💖💖🌟🌟 pic.twitter.com/yLPd75buMP

But after the win was in, he was cool as a cucumber — on the telephone, of course.