U.S. Wages Rising At The Fastest Pace In Years Amid Solid Hiring

U.S. Wages Rising At The Fastest Pace In Years Amid Solid Hiring 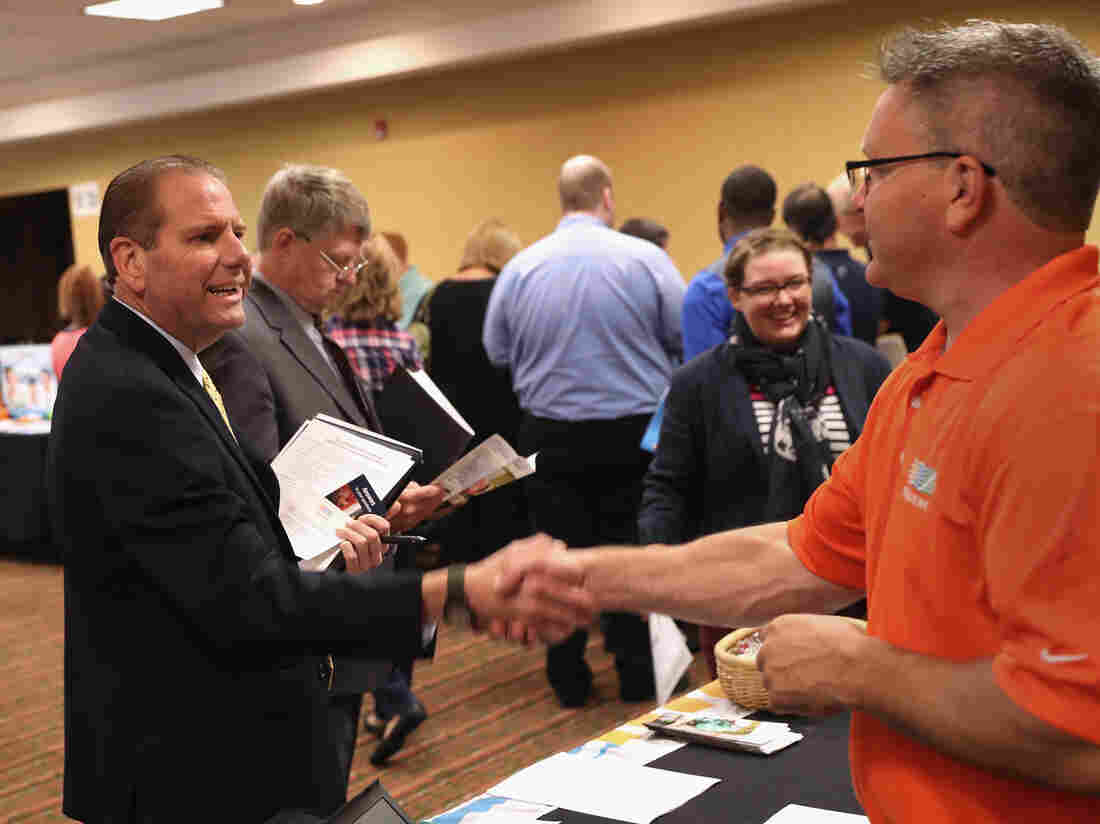 A man speaks with a potential employer Sept. 13 at a job fair in Hartford, Conn. Recent wage gains reflect the steady healing of the labor market since the worst of the Great Recession. John Moore/Getty Images hide caption 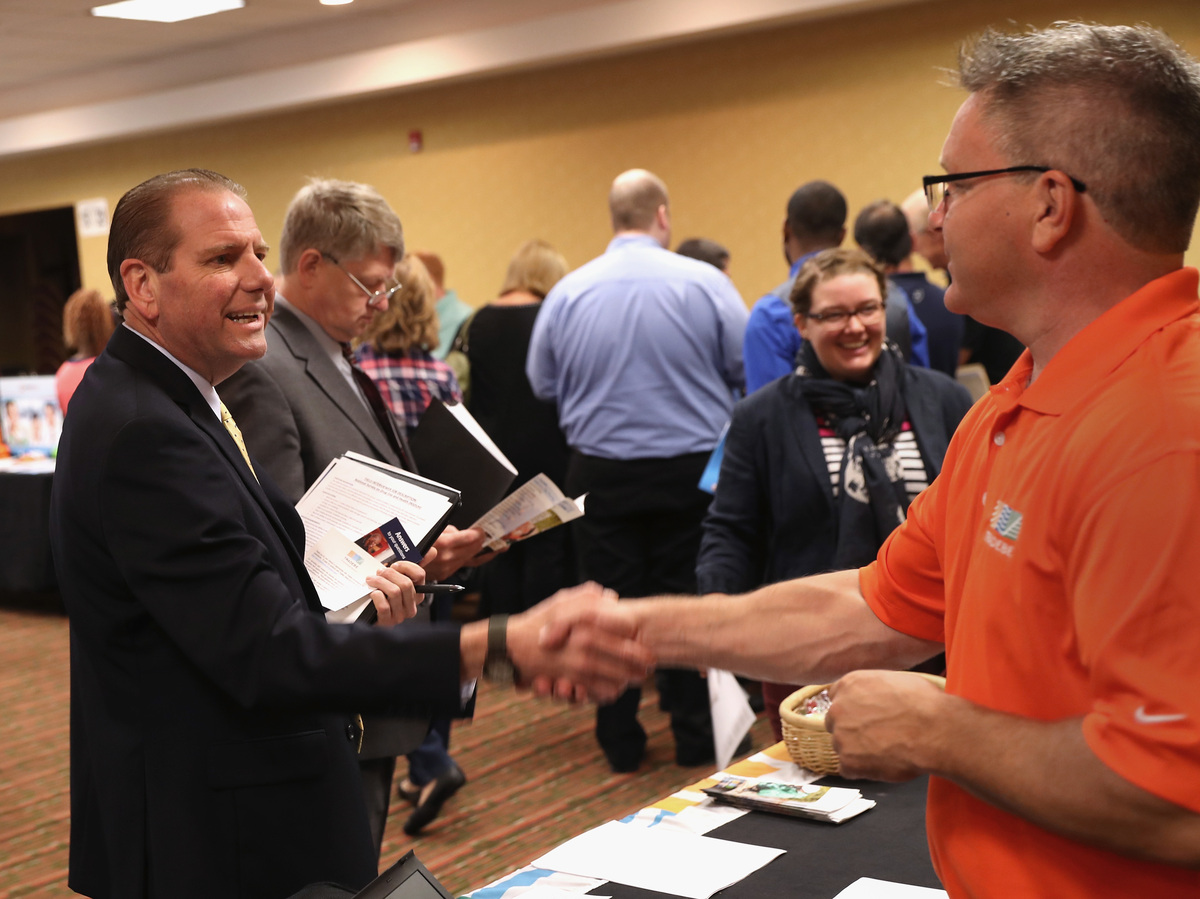 A man speaks with a potential employer Sept. 13 at a job fair in Hartford, Conn. Recent wage gains reflect the steady healing of the labor market since the worst of the Great Recession.

Go ahead — ask the boss for a raise.

The jobs report released Friday by the Labor Department suggests the time finally may be right to demand a fatter paycheck.

In all, average hourly earnings have risen by 2.8 percent over the past year — the fastest pace since the end of the Great Recession. That's a lot considering that the consumer price index has risen only 1.5 percent in the same 12 months. So workers now have more buying power at the store. 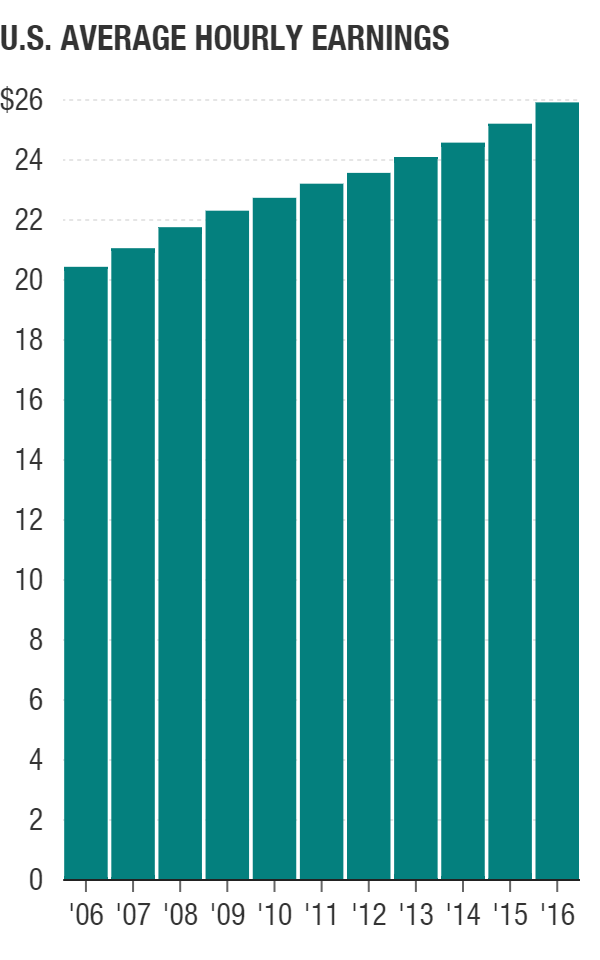 Average hourly earnings for all employees on private nonfarm payrolls, seasonally adjusted, in October of each year. NPR/Bureau of Labor Statistics hide caption

"As the job market gets tighter, firms are responding to tougher competition for workers by raising pay," PNC chief economist Stuart Hoffman said in his assessment. "This is a big positive for income growth, consumer spending, and the overall economy."

The recent wage gains — after years of stagnation — reflect the steady healing of the labor market since the worst of the Great Recession. In October 2009, the unemployment rate was 10 percent. Last month, it was 4.9 percent.

The Labor Department said employers added 161,000 jobs in October, slightly below most economists' estimates. Still, it marked a record 73-month streak of total job growth, and the report contained upward revisions for August and September. Originally, the data showed employers had added 167,000 jobs in August and 156,000 in September. The revisions show those figures were too low. In fact, August saw 176,000 new jobs and September had 191,000.

Some economists say those upward revisions may actually be worrisome indicators because they suggest the summer's hiring surge is over. "The October jobs report is much weaker than recent months, and reflects a sluggish, and maybe faltering recovery," said Michael Hicks, director of Ball State University's Center for Business and Economic Research.

But most economists are seeing the latest jobs report in a positive light, thanks to that wage growth.

"The really good news in the past couple of months has been the acceleration in wage inflation," Nariman Behravesh, chief economist for IHS Markit, said in his review of October's data. "This means that the tightening in the labor market is finally beginning to benefit workers — and will support stable consumer spending growth."

The question that the Federal Reserve Board's policymakers will have to ponder is whether those rising wages are suggesting the economy is growing too quickly. If employers must start pushing up wages rapidly, then they may begin creating an inflationary spiral. Fed officials who want to head off inflation could raise interest rates at their next meeting — a move that could cool the business environment.

"Workers deserve a raise," he said. "They've been looking for this raise for some time and we're seeing sustained evidence that they're getting that raise."

Republican candidate Donald Trump issued a statement saying this was a "disastrous jobs report" because "workers are earning less in cash wages than in 1973."

Adjusting for inflation, U.S. wages peaked in the early 1970s, and have never returned to those levels.

The Economy Grew At A Solid Pace This Summer, But Consumers Are Wary