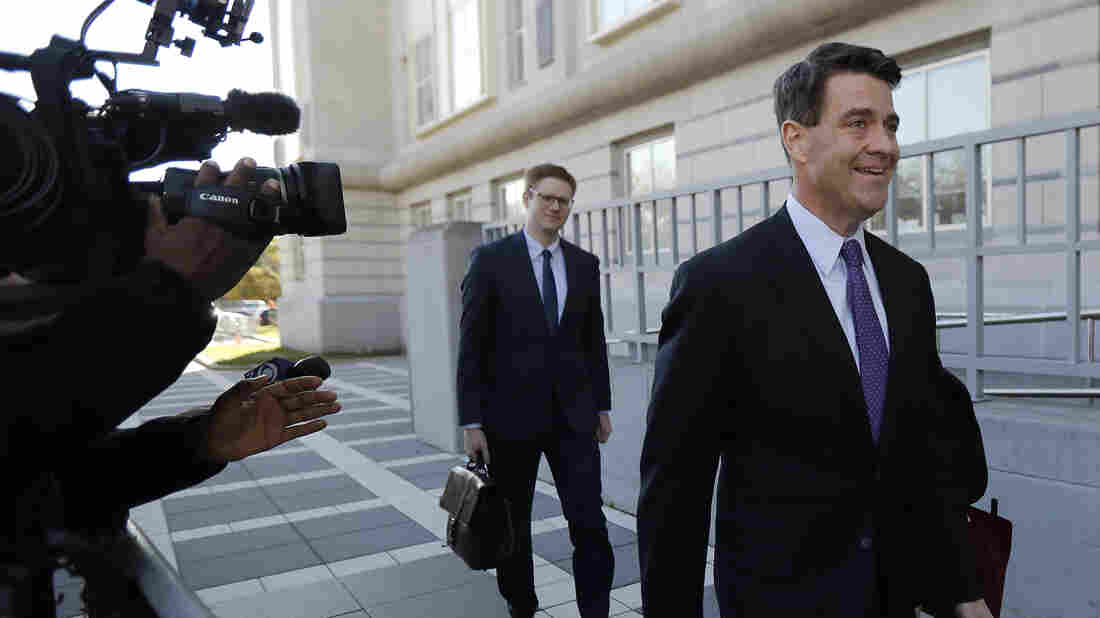 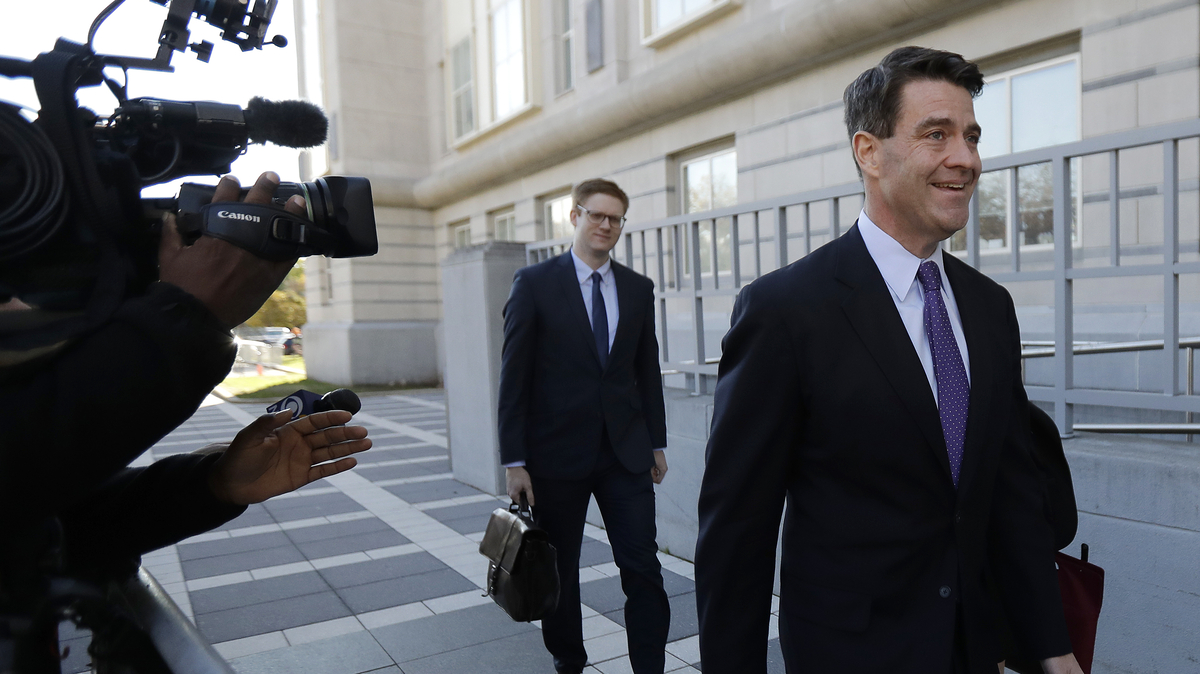 Bill Baroni (right), New Jersey Gov. Chris Christie's former top appointee at the Port Authority of New York and New Jersey, arrives at federal court in Newark, N.J., on Friday. Baroni and Bridget Kelly were found guilty of scheming to use traffic jams to punish a Democratic mayor who didn't endorse Christie in 2013.

Two former allies of New Jersey Gov. Chris Christie have been found guilty of all counts against them in connection with the "Bridgegate" scandal.

The case involved a scheme to intentionally cause traffic problems on the George Washington Bridge in September 2013, as political retaliation against a mayor who did not endorse Christie for re-election. A total of four former top Christie aides have now either pleaded guilty or been found guilty of federal crimes — three of them related to Bridgegate.

The charges against them included conspiracy and fraud.

Kelly wept silently as the verdict was announced, WNYC's Matt Katz reports, while Baroni smiled and hugged his family.

Their sentencing is set for Feb. 21, and they will be on probation until then, Katz says.

WNYC reports that the two could face sentences of up to 86 years in prison.

"The federal jury took five days to reach a verdict in the scandal that helped sink Christie's Republican campaign for president," The Associated Press reports. "The verdict came before the judge ruled on a request by defense attorneys to declare a mistrial in the case."

Kelly and Baroni both plan to appeal, according to statements made by their lawyers after the verdict was announced.

The defense lawyers sharply criticized prosecutors for going after Christie's aides without charging Christie, who has not been indicted in connection with this case and did not testify in the trial.

Kelly's lawyer described her as a "scapegoat."

"[Federal prosecutors] should have had belief in their own case to charge powerful people," said Michael Baldassare, Baroni's attorney. "And they did not."

U.S. Attorney Paul Fishman defended the decision not to prosecute Christie, saying that prosecutors did not have enough evidence to build a case against him when they made indictments in the case.

During the trial, Kelly testified that Christie knew about the scheme. She said he was told in advance about the plan that would cause traffic nightmares in Fort Lee, N.J., and responded by asking about his relationship with the local mayor.

That contradicted public statements from the governor, who said after the scandal that he had "no knowledge or involvement" in the traffic snarl.

He reiterated that position in a statement Friday afternoon, saying, "I'm saddened about the choices made by Bill Baroni, Bridget Kelly and [former aide] David Wildstein. ... But let me be clear once again, I had no knowledge prior to or during these lane realignments, and had no role in authorizing them. No believable evidence was presented to contradict that fact. Anything said to the contrary over the past six weeks in court is simply untrue."

If you could use a refresher on what went down in "Bridgegate," Matt Katz told the story on Fresh Air earlier this year:

"And the result was this massive, massive traffic jam in his town because all these cars from all over North Jersey use those lanes. Ambulance workers had to get out of their vehicles and run to the scene of an emergency. It was the first day of school, so new kindergartners were sitting on their buses for hours. And he couldn't figure out why the Port Authority that runs the bridge that's controlled by Christie would have closed these lanes.

"So he starts making calls, doesn't get a call back. This traffic jam went on for five days including ... the anniversary of Sept. 11, which caused further distress because the bridge is a terrorist target. It went on for five mornings in a row before somebody from the New York side of the Port Authority — because this is a bi-state agency — discovered what had been going on and decided to reopen the lanes. And the explanation initially from Christie officials was that they were just doing a traffic study."

An email from Kelly to former Port Authority official Wildstein was a key piece of evidence suggesting that the closure was, in fact, political. It read: "Time for some traffic problems in Fort Lee."

"Got it," Wildstein said in reply.

Wildstein pleaded guilty to two counts of conspiracy earlier this year. David Samson, a close friend of Christie's, is the fourth Christie aide who has pleaded guilty to a federal crime; he admitted promising special treatment from the Port Authority to bribe United Airlines.

A previous version of this story said New Jersey Gov. Chris Christie had been re-elected at the time of the Bridegate scheme. In fact, the George Washington Bridge traffic problems occurred in September 2013 and Christie was re-elected that November.