Accessibility links
Woman's Accused Kidnapper In South Carolina Confesses To Multiple Murders : The Two-Way Todd Kohlhepp, 45, was arrested Thursday after sheriff's deputies found Kala Brown on his wooded property, "chained like a dog" and living in a metal container. 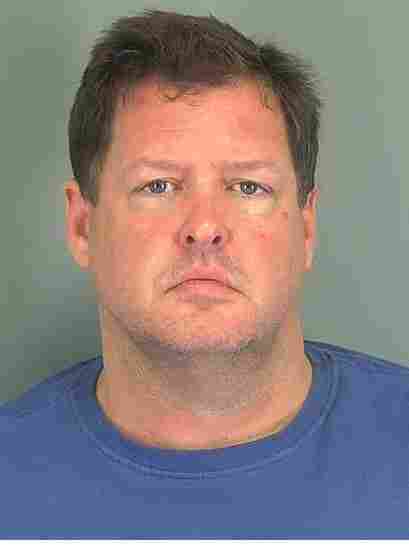 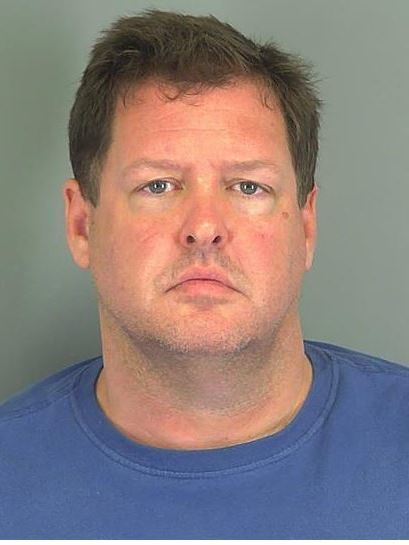 Todd Kohlhepp, 45, was arrested for kidnapping Thursday; on Saturday, he confessed to a nearly 13-year-old quadruple homicide.

Days after the dramatic rescue of a woman whom a local sheriff said had been "chained like a dog" and held prisoner in a metal storage container in Woodruff, S.C., officials say the man accused of that crime has also confessed to a quadruple killing from 2003.

Todd Kohlhepp, 45, was arrested Thursday after sheriff's deputies found Kala Brown on his wooded property. He now faces kidnapping charges and four counts of murder, with other charges likely to follow. The body of Charles Carver, Brown's boyfriend, was also found on Kohlhepp's property; the couple had been missing since late August.

On Saturday, Spartanburg County Sheriff Chuck Wright said Kohlhepp, a realtor who was a registered sex offender due to a kidnapping and sexual assault case when he was a teenager in Arizona, had confessed to shooting and killing four people in Chesnee, S.C. — a case that's been known locally as the Superbike murders and which could now be solved on Nov. 6, its thirteenth anniversary.

The number of murders Kohlhepp is charged with could still grow. He visited his property with deputies Saturday, and Wright says Kohlhepp claims to have buried two other bodies there, local TV WYFF reports.

On Sunday, Kohlhepp appeared in a court hearing that saw a judge deny a bond.

The 2003 killings at a motorcycle shop had been featured on America's Most Wanted back in 2012. Announcing news of the confession late Saturday, Wright said the case had repeatedly prompted him and his deputies to pray. 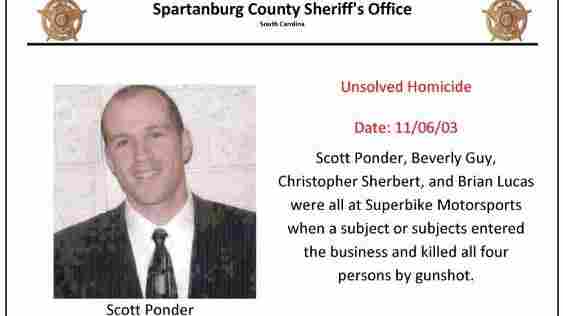 Since 2003, the killings of four people at a motorcycle shop in Chesnee, S.C., had remained unsolved. Spartanburg County Sheriff's Department hide caption 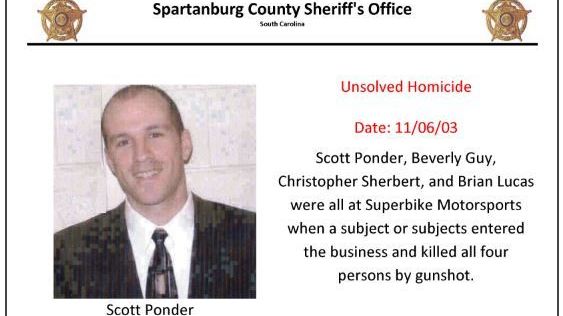 Since 2003, the killings of four people at a motorcycle shop in Chesnee, S.C., had remained unsolved.

"I can't even imagine what the victims' families have been going through," he said.

When she was found on Kohlhepp's nearly 100-acre property, Brown told law enforcement agents that as many as four bodies could be buried there — prompting Wright to tell journalists Thursday, "We're trying to make sure we don't have a serial killer on our hands."

Wright added that in Kohlhepp, a serial killer "very possibly could be what we have."

As for how Brown was found, local TV news WSPA says that after she and Carver went missing in nearby Anderson County around Aug. 31, police had tracked her to the property where she was eventually found. From WSPA:

"Anderson Police Chief Jim Stewart said they were pinging Brown's phone two days after she was reported missing. He says it pinged on the property where Brown was found. The phone went dead after two days.

"Two weeks before they were able to get a search warrant for the property, the Spartanburg County Sheriff's Office flew over the property and realized they needed to get on the ground.

"Anderson police say from early on they had no indication there was foul play, even with the cell phone pings."

The recent discovery came after deputies executed a search warrant on Kohlhepp's property; they heard Brown banging on the container that was her prison, reports local TV News 13.

When the search warrant was finally executed, Kohlhepp was present at his property; he was arrested the same day.