Accessibility links
China Steps In To Bar 2 Newly Elected Hong Kong Legislators From Office : The Two-Way When the two young lawmakers took their oaths of office last month, they inserted a derogatory term for China. Now Beijing says they can't retake the oath, which means they can't serve their terms. 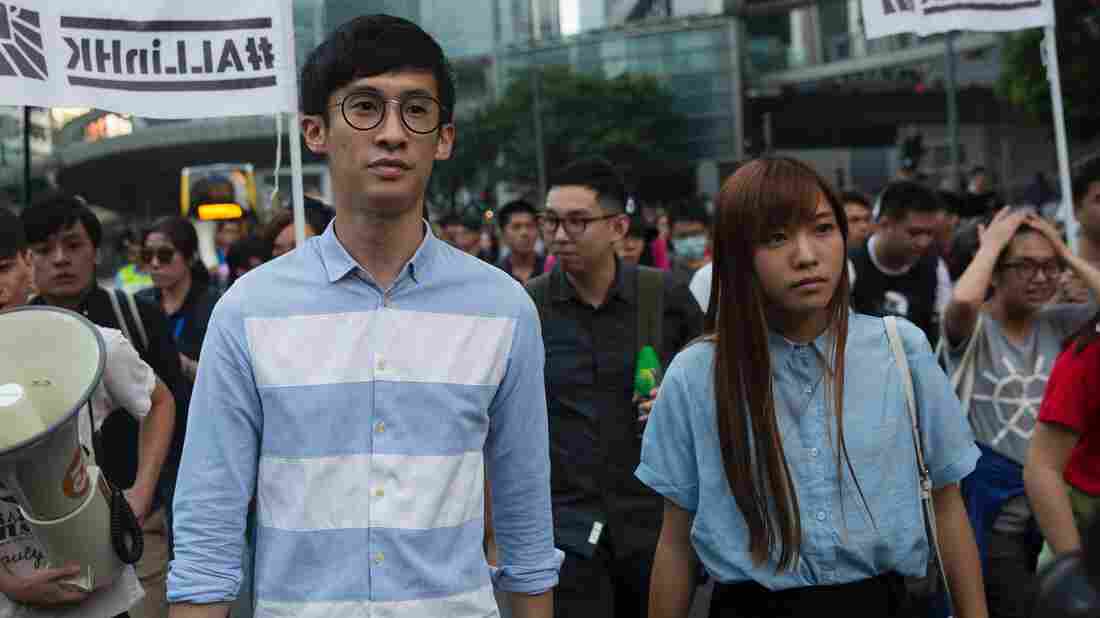 Sixtus "Baggio" Leung (left) and Yau Wai-ching (right) of the Youngspirations party march during a protest in Hong Kong on Sunday. Hong Kong police used pepper spray to drive back hundreds of protesters angry at China's decision to intervene in a row over whether the two pro-independence lawmakers should be barred from the city's legislature. Isaac Lawrence/AFP/Getty Images hide caption

China has ruled that two newly elected Hong Kong lawmakers who insulted the mainland and didn't swear allegiance while taking their oaths of office won't be able to retake the oaths, which means they won't be able to take office.

Beijing announced its decision Monday, by which point there had already been widespread protests against the mainland's intervention. On Sunday night, after the Chinese government signaled it would be stepping into the matter, thousands of protesters took to the streets of Hong Kong, NPR's Rob Schmitz reports.

"Riot police sprayed pepper spray into the crowds as some protesters threw bricks at them," Rob says. "Four were arrested and two police officers were injured."

The decision itself is likely to trigger even more protests, The Associated Press reports.

The two young lawmakers in question — Sixtus "Baggio" Leung, 30, and Yau Wai-ching, 25 — are pro-independence members of the radical Youngspiration party who were elected in September, the AP says. Last month, the news service reports, they modified their oaths "to insert a disparaging Japanese expression for China" and "vowed to defend the 'Hong Kong nation' " while displaying a flag that declared "Hong Kong is not China."

"Their oaths were ruled invalid, but subsequent attempts have resulted in mayhem in the legislature's weekly sessions," the AP writes.

On Monday, a Chinese legislative panel issued a ruling that would prevent the two from retaking their oaths. The panel further said that anyone who advocates for Hong Kong's independence is disqualified from election and should be under legal investigation, according to the AP.

The Beijing-backed chief executive of Hong Kong says his government will fully implement the decision against Leung and Yau, the wire service reports.

"Beijing's decision is just the second time since China took over sovereignty of Hong Kong in 1997 that China has intervened in the city's legislative affairs without being asked to do so," Rob says.

"The drastic action to bar the two democratically elected officials for what many considered to be a childish matter has prompted fears in Hong Kong that further attempts at autonomy will be severely punished," he notes.

At the heart of the debate is the "one country, two systems" model, under which Hong Kong is supposed to maintain a degree of autonomy within China. Hong Kong has a separate economic and political system — including, normally, its own courts, which were bypassed in this instance. China says its intervention is justified because espousing independence is an attack on the model itself.

Chinese politician Li Fei, a deputy secretary general of the National People's Congress Standing Committee, told the AP and other reporters that the mini-constitution of Hong Kong — called Basic Law — gives Beijing the power to step in where there's a difference of legal opinion. And he said there would be "no leniency" toward those who advocated for Hong Kong's independence.

"Breaking 'one-country two-systems' is violating the law, not voicing a political view," he said, according to the AP.

Last month, Rob provided some context on this issue:

"When Britain ceded control of Hong Kong to China in 1997, part of the deal was that the model of 'one country, two systems' was to remain in force for 50 years. The idea was that Hong Kong would be able to keep its style of government and its identity without being overwhelmed by China. And 50 years seemed a long way off.

"But Hong Kong legislator Claudia Mo thinks the city's new batch of elected officials will stir things up and try to fight for Hong Kong's rights in the three decades before 2047 when China is set to do away with the 'one country, two systems' model and assume full sovereignty over the city.

" 'I think Hong Kong will become even more vibrant on the political front. You could easily see Umbrella Movement, Part 2,' she says."