Accessibility links
Woman In Iconic 'Afghan Girl' Photo Deported Back To Afghanistan : The Two-Way Sharbat Gula, who appeared on the cover of National Geographic in 1984, was returned to her native country Wednesday. Pakistan had accused her of illegally obtaining identity documents.

Woman In Iconic 'Afghan Girl' Photo Deported Back To Afghanistan

Woman In Iconic 'Afghan Girl' Photo Deported Back To Afghanistan 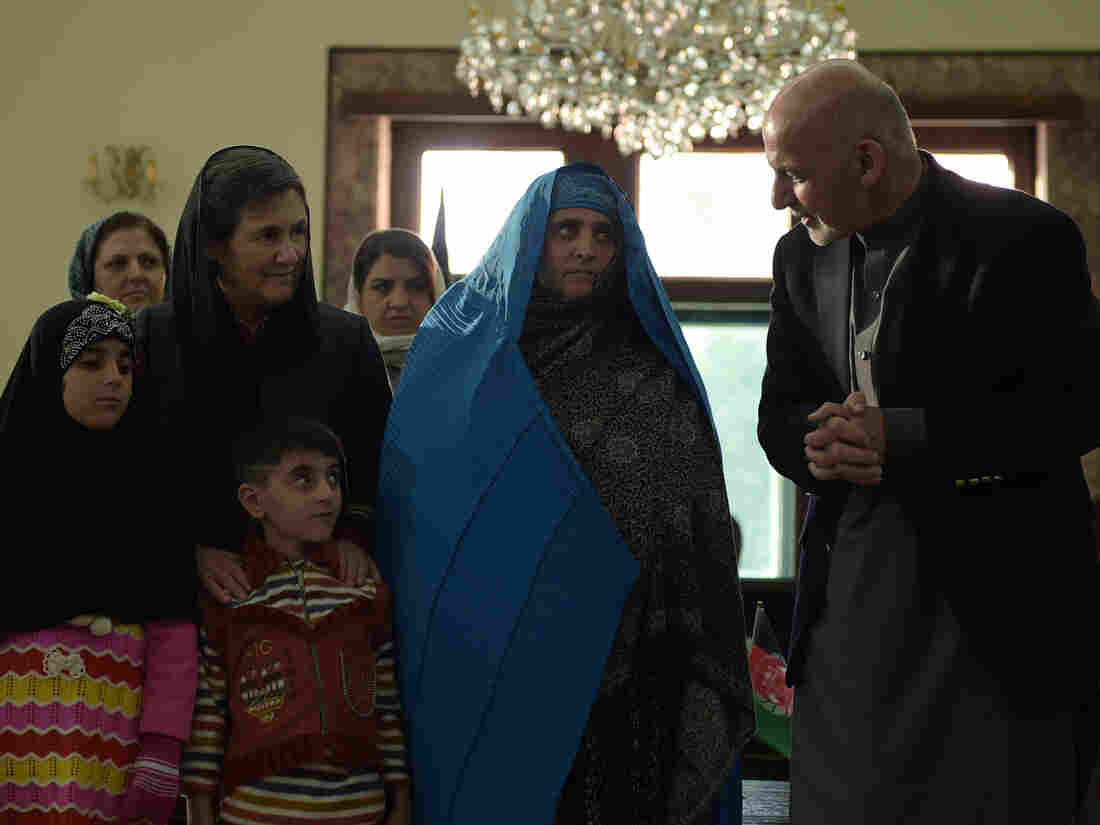 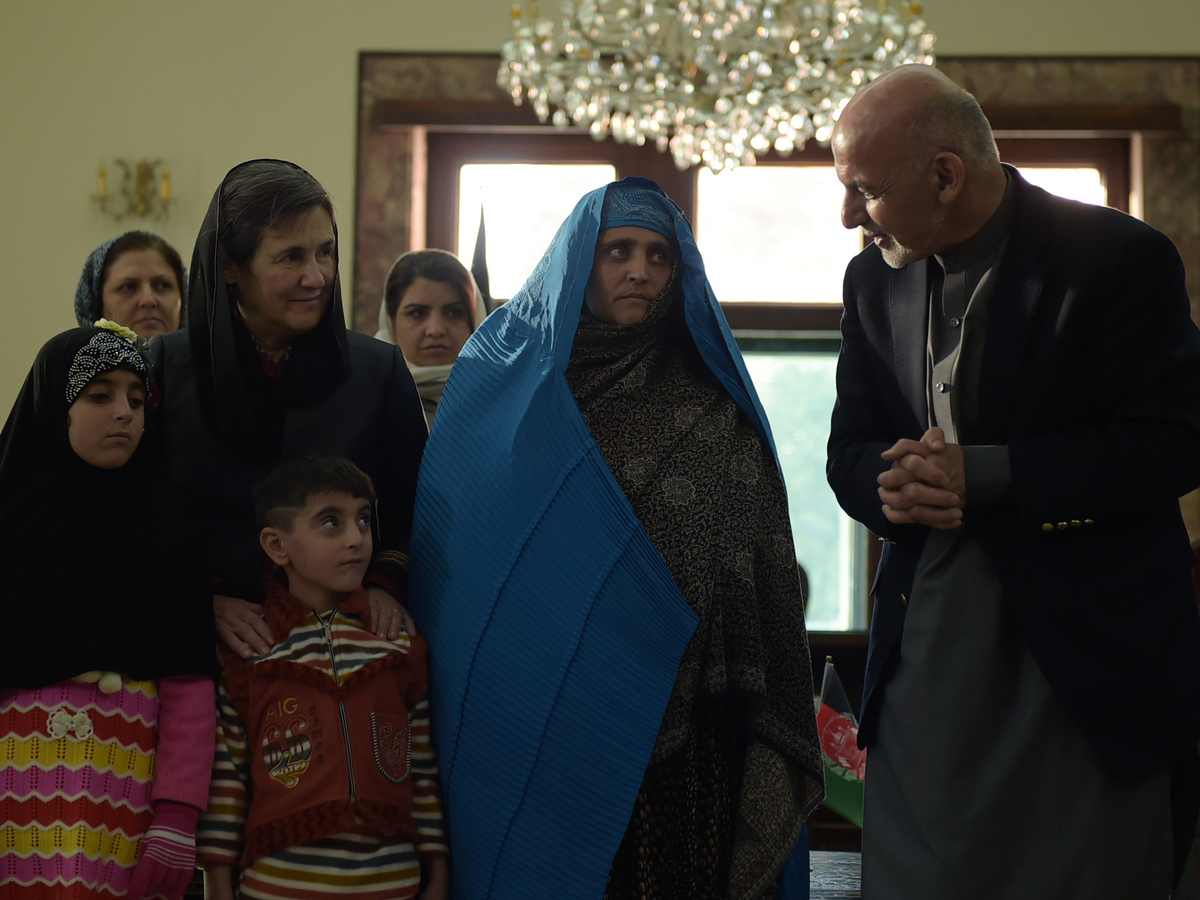 Afghan President Ashraf Ghani with Sharbat Gula (center) at the Presidential Palace in Kabul on Wednesday.

The green-eyed Afghan woman who famously appeared on the cover of National Geographic is back in her native country after being deported from Pakistan, where she had resided for more than three decades.

Pleased to have welcomed Sharbat Gula & her family back to AFG. Her life inspires us all. She represents all the brave women of this land. pic.twitter.com/FYocLLsfyv

Afghanistan's president, Ashraf Ghani, welcomed the return of Sharbat Gula at a ceremony held at the presidential palace in Kabul on Wednesday.

The memorable cover photo depicting Gula, at about 12 years old, was taken at a refugee camp in Pakistan in 1984. As NPR's Philip Reeves has reported, Gula has spent most of her life outside Afghanistan after her parents were killed in a Soviet airstrike.

Now in her 40s, Gula has been the subject of a case dating to February 2015 over identity documents. Pakistani officials said Gula had lied about being born there to get Computerized National Identity Cards for herself and two men who said they were her sons. Earlier this month, a court found her guilty of having illegally obtained a Pakistani identity card. 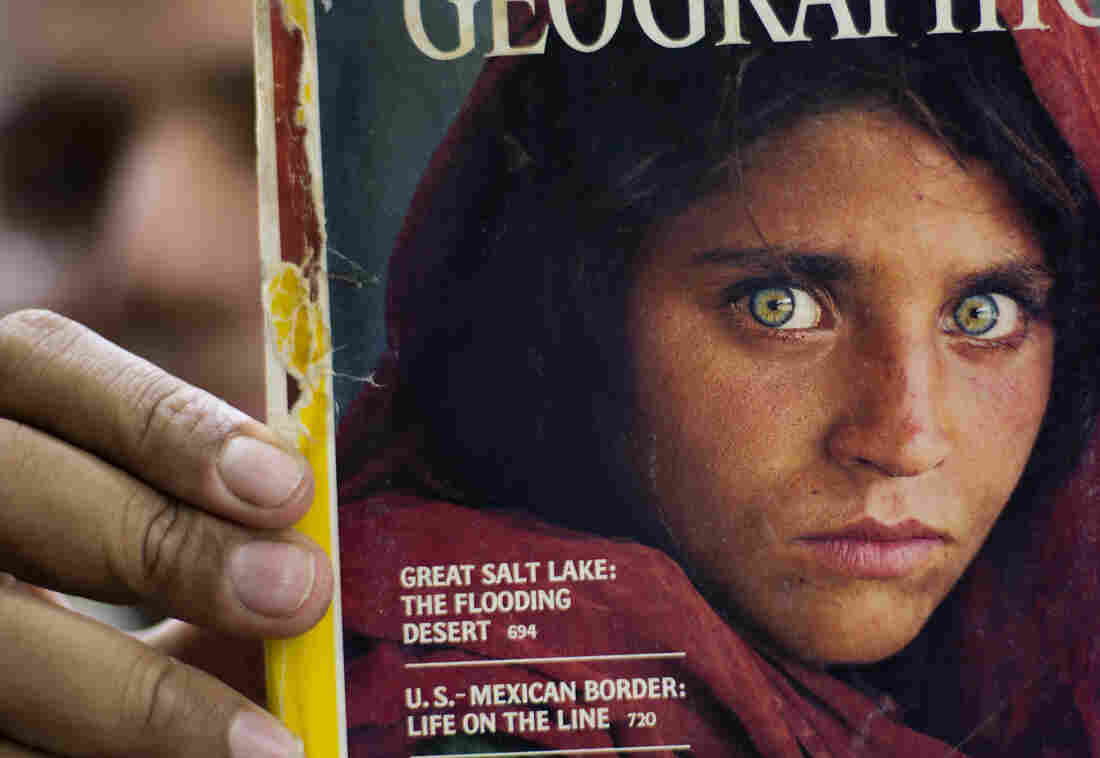 The owner of a bookstore shows a copy of National Geographic magazine with the photograph of Sharbat Gula, when she was around 12 years old. B.K. Bangash/AP hide caption 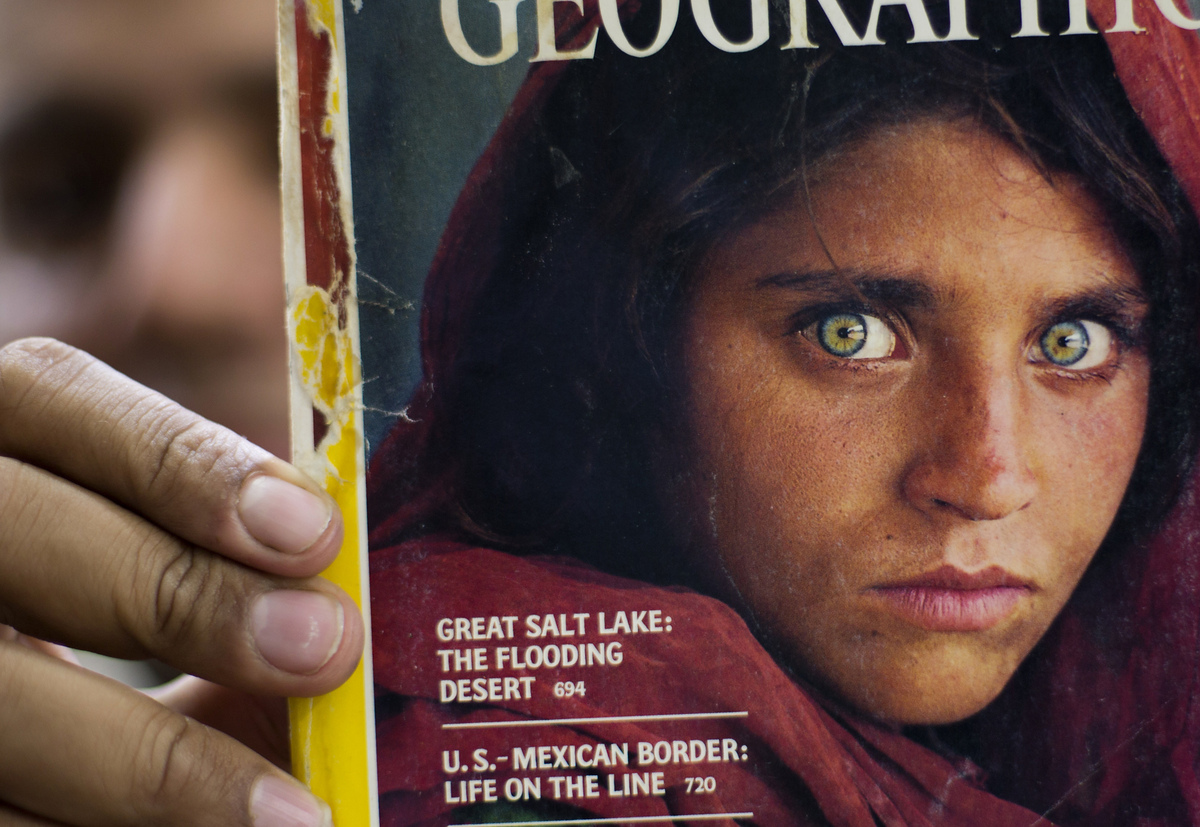 The owner of a bookstore shows a copy of National Geographic magazine with the photograph of Sharbat Gula, when she was around 12 years old.

Gula was handed off at the border along with her four children, according to the BBC. But, as The Two-Way has reported, that was after she was detained and sentenced to a 15-day jail term and $1,100 fine.

"There are strict restrictions to getting a Pakistani ID card, which is needed for opening a bank account or to buy property. It has been illegal for non-Pakistanis to have IDs since they were first issued in the 1970s but the law was not enforced."

Gula's return to Afghanistan comes at a time of continued fighting between the Taliban and Afghan forces trained and sometimes accompanied by U.S. service members. As Philip told Morning Edition last month, Gula was "one of several million" Afghans who fled to Pakistan to escape violence in their native country:

"Most are registered refugees, but many are undocumented. Gula is accused of having forged ID papers. That's why she was arrested. Pakistan's government has previously set deadlines for the Afghans' repatriation and then postponed these. Now there's a new deadline, next spring. This time, it seems more serious.

"The United Nations says there's already a big surge in Afghans returning to Afghanistan from Pakistan. Fifty thousand crossed in one week alone. A rise in the small grant paid to returning refugees may be a factor, but Afghans say they're constantly harassed by the Pakistani police. They say the mood toward them changed when militants massacred around 130 Pakistani schoolkids in 2014. Afghans were suspected of harboring terrorists. Reports began to circulate of Afghans being hounded out of jobs and homes and refused ID papers."

EU Will Send Afghans Back To An Increasingly Violent Home Country

The South Asia director for Amnesty International, Champa Patel, has called the deportation a "grave injustice" and "emblematic of Pakistan's cruel treatment of Afghan refugees," as we've previously reported.

Under a plan announced in Brussels in October, potentially tens of thousands of Afghans will be sent to Afghanistan from the European Union — so many people that the agreement notes both sides are considering whether to build a dedicated terminal for them all at Kabul International Airport.