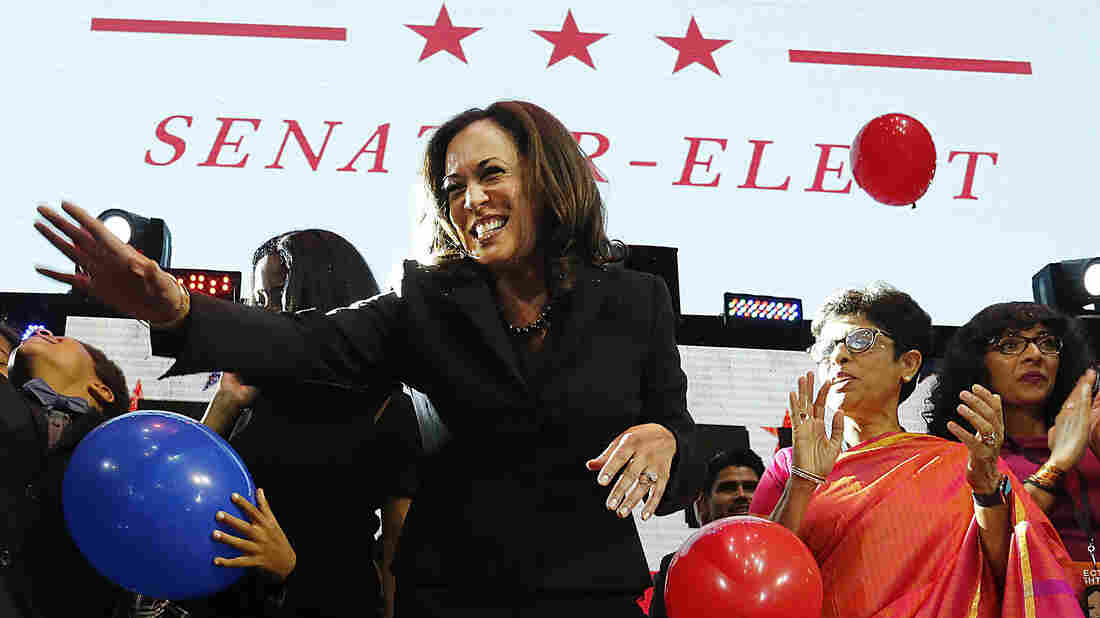 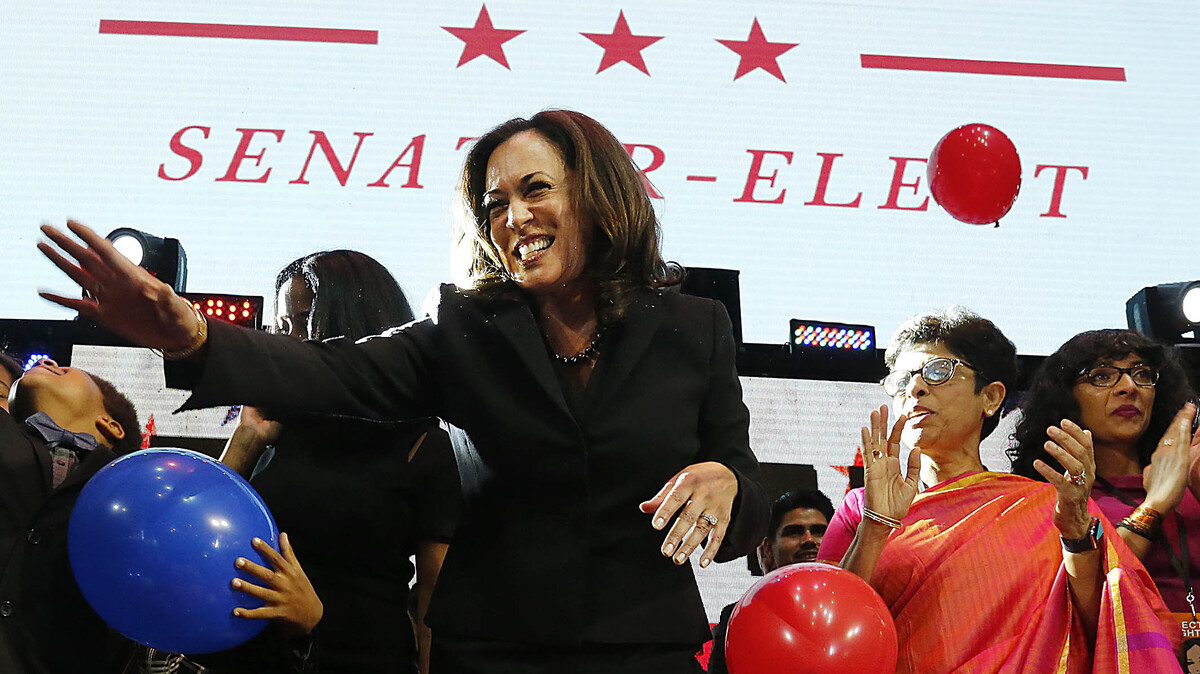 Kamala Harris celebrates winning her Senate race Tuesday in Los Angeles. Harris, who's African-American and South Asian-American, is the first biracial woman elected to the Senate.

And in the House of Representatives, Pramila Jayapal of Washington state was one of several candidates of Indian origin to claim office, in a group that includes Harris (whose mother is an Indian-American) and new House members Ro Khanna of California and Raja Krishnamoorthi of Illinois. All are Democrats.

In Minnesota, Ilhan Omar also wrote her name in the history books, winning a state race to become the first Somali-American legislator in the U.S.

With their historic overtones, the three U.S. Senate wins by Harris, Masto and Duckworth — in California, Nevada, and Illinois — highlighted the good news for Democrats on a day when they'd been hoping to put the first woman in the White House.

After last night's surprising loss to Donald Trump, Hillary Clinton — who claimed a lead in the popular vote Wednesday morning — spoke about her hope of breaking "that highest and hardest glass ceiling" in the White House, adding, "But someday, someone will."

Clinton also said: "To all the little girls who are watching this: Never doubt that you are valuable, and powerful, and deserving of every chance and opportunity in the world to pursue and achieve your own dreams."

"Duckworth, a veteran who lost both legs when the helicopter she was co-piloting was shot down in Iraq, ran campaign ads about Kirk's exaggerations of his military experience," the station adds.

Retaliating during a late-October debate, Kirk sought to deflate the impression of Duckworth's heritage and service by saying, "I'd forgotten that your parents came all the way from Thailand to serve George Washington."

It was quickly pointed out to Kirk that while Duckworth's mother is a Thai immigrant of Chinese heritage, her father is a World War II veteran who "traces his heritage back to the American Revolution," as NPR's Jessica Taylor reported. Kirk later apologized, but the damage was done.

For Harris, 52, her Senate victory is the latest round of "firsts" — she was already California's first woman, African-American, and South Asian-American to be attorney general. On Tuesday night, she beat out Rep. Loretta Sanchez in the fight to succeed the retiring Sen. Barbara Boxer.

"I intend to fight for a state that has the largest number of immigrants documented and undocumented of any state in this country and do everything we can to bring them justice and dignity and fairness under the law and pass comprehensive immigration reform," Harris said, according to member station KPCC.

Harris and Sanchez, both Democrats, faced each other on Election Day because of California's new law that puts the top two vote-getters from the primary season on the ballot, regardless of party affiliation.

Harris will become the second African-American woman to serve in the Senate, following Sen. Carol Moseley Braun of Illinois, who served in the 1990s.

When she reaches the Senate, Harris will be joined by another former state attorney general — Nevada's Cortez Masto, who "won a nail biter Senate race and will keep the seat of retiring Sen. Harry Reid in Democratic hands," as member station KUNR in Reno reports.

Masto defeated Rep. Joe Heck, a Republican who's a three-term veteran of Congress — and who dropped his support for the now-President-elect Donald Trump one month ago, after an audio recording emerged in which Trump talking about groping women.

Masto's campaign "framed her as a 'bipartisan problem solver' independent of the polarizing Reid who has held the seat since the 1980's," KUNR reports.

In Minneapolis, Omar, 34, won the District 60B seat in the Minnesota House of Representatives. Last night, she began her victory speech by recalling how she used to attend caucuses with her grandfather, serving as his interpreter. Wearing a white headscarf, she promised to speak for marginalized citizens during her tenure.

As she spoke, Omar's husband and children looked on.

"While her election wasn't a surprise in a reliably Democratic district — she was elected by almost 80 percent of the vote there — it carried huge symbolic importance in Minnesota, home to the nation's largest Somali immigrant population. It came just days after Republican presidential candidate Donald Trump ripped Somali immigration as a threat to Minnesota."