Accessibility links
China Jails 49 Over Deadly Tianjin Warehouse Explosions : The Two-Way The people sentenced include 25 government officials and 24 staffers of the companies involved in one of China's worst-ever industrial tragedies. 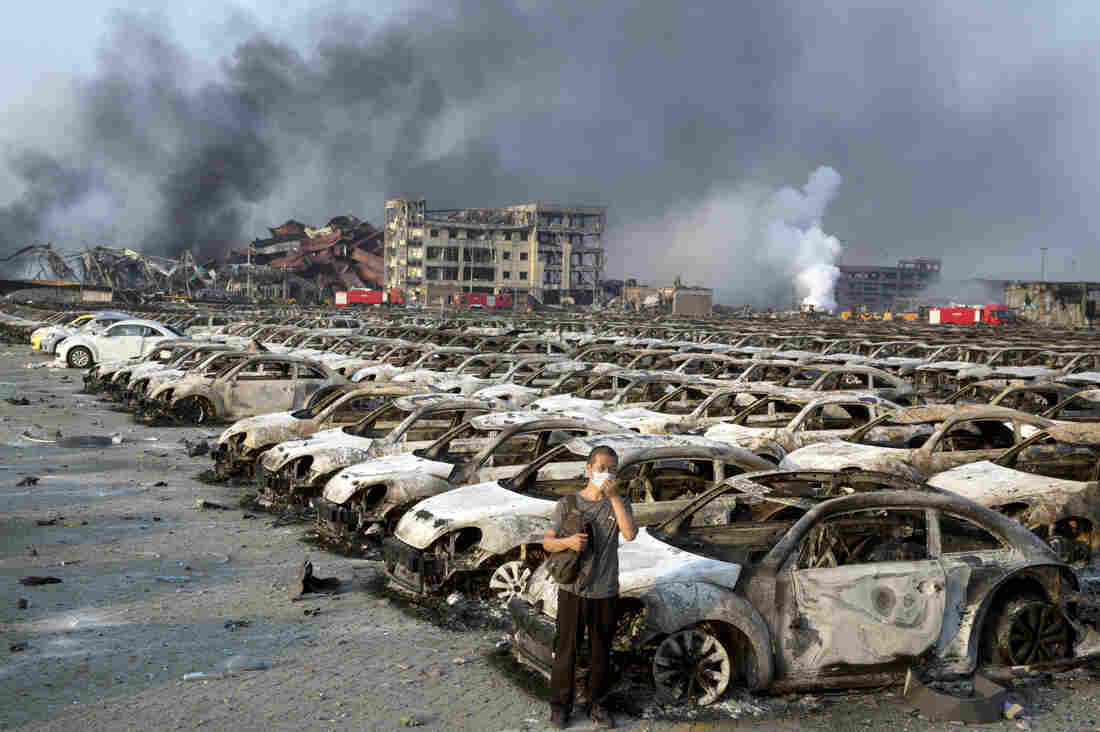 A man stands near the charred remains of new cars at a parking lot near the site of the warehouse explosions in Aug. 2015, in northeastern China's Tianjin municipality. Ng Han Guan/AP hide caption 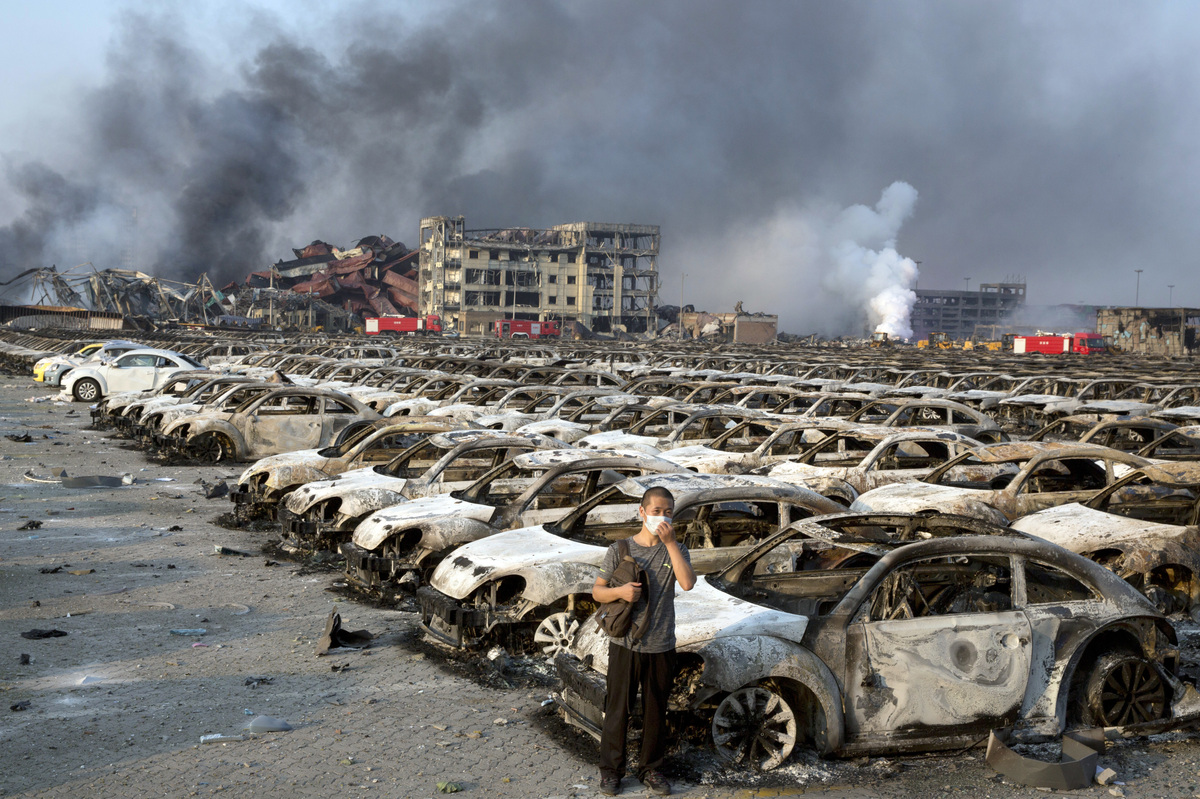 A man stands near the charred remains of new cars at a parking lot near the site of the warehouse explosions in Aug. 2015, in northeastern China's Tianjin municipality.

Judges in China are jailing 49 people on charges tied to deadly explosions at a warehouse in the port city of Tianjin that killed at least 165 people in August 2015.

This was one of China's worst-ever industrial tragedies. The people sentenced include 25 government officials and 24 staffers of the companies involved, according to China's state-run Xinhua news agency. The verdicts were issued from ten different courts during the last three days.

The most serious sentence was handed to Yu Xuewei, the chairman of the warehouse company. He was "sentenced to death with a two-year reprieve," Xinhua reported, after a court found him guilty of "bribing port administration officials with cash and goods worth [$23,333] to obtain a certificate to handle hazardous chemicals at the port."

As The Associated Press reported, "such sentences are usually commuted to life in prison after two years." Yu said in court that he "regretted his actions and wouldn't appeal," the wire service added. 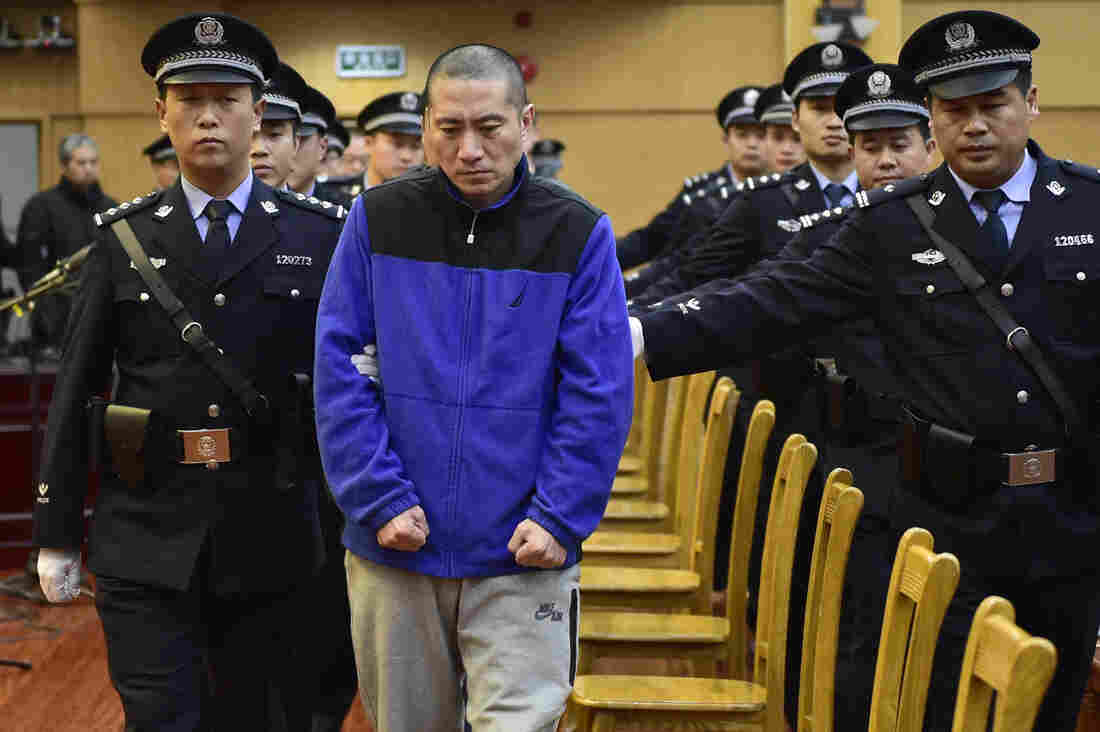 Others sentenced included staff from Ruihai Logistics and another company that provided Ruihai with "counterfeit safety evaluations," according to Xinhua. The officials were sentenced to prison for "dereliction of duty, abuse of power, and accepting bribes."

NPR's Frank Langfitt said that "workers at the warehouse were handling 3,000 tons of dangerous chemicals— ­ what became the ingredients of a giant bomb that left a crater about 20 feet deep." The dangerous chemicals were also stored at an illegally close distance to residential communities, he said.

The Associated Press explained what caused the massive explosions:

"Investigators found that the blast was triggered when stocks of nitrocellulose, a flammable compound used as a binding agent with medical applications and as an ingredient of lacquer, became too dry and caught fire in the August heat. The flames then spread to illegal stores of the combustible fertilizer ammonium nitrate, triggering a series of blasts that flattened the warehouse, destroyed an adjacent auto lot and caused extensive damage to neighboring apartment blocks."

More than 300 buildings were damaged, Xinhua reported, and the destruction caused losses of more than $1 billion.

At the time, Frank reported that the tragedy did not surprise local residents. "This is an intensely corrupt system that's built on relationships," he said. "Officials routinely will cut corners for people with connections or to make money."