Accessibility links
Can't Hurry Love: Rare Snail Finds Romance After Global Search : The Two-Way A genetic fluke stood in the way of love for a lonely and unique snail named Jeremy. But thanks to a public appeal, the snail has hopefully found a mate — or maybe even two. 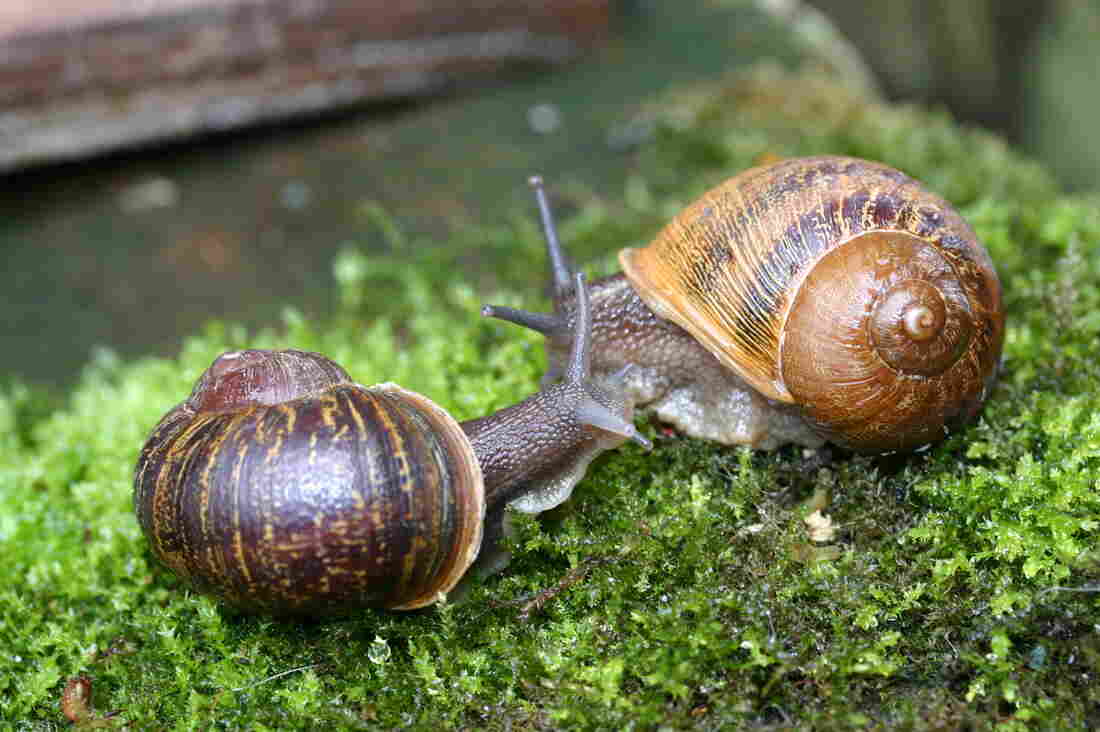 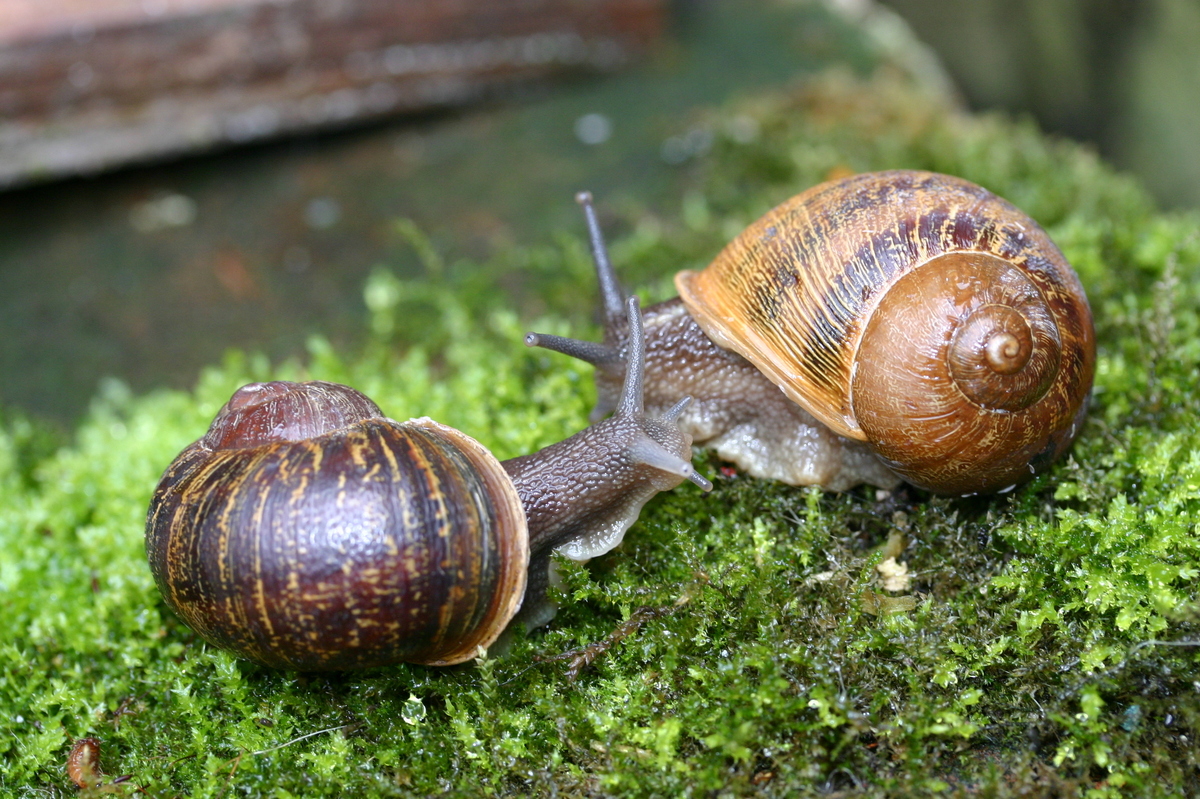 A genetic fluke stood in the way of love for a lonely, unique garden snail named Jeremy.

But against all odds, and thanks to a global search, Jeremy has hopefully found a mate (or two).

Jeremy is a "lefty" snail, meaning his shell swirls counterclockwise and his sex organs are on the left side of his head. He's a mirror image of other members of his species — and he wouldn't be able to mate with normal snails because their reproductive organs wouldn't line up.

He could be one in a million, evolutionary geneticist Angus Davison of the University of Nottingham tells The Two-Way, though scientists are now thinking it's a trait likely found in one out of every 100,000 snails.

Davison's team is working to determine the gene that makes Jeremy's shell swirl to the left — and studying his offspring would be helpful for their research. Incidentally, Jeremy is named after Jeremy Corbyn, leader of the U.K.'s Labour Party who also has a fondness for gardens.

They put out a call asking the public "for its help in finding the lonely mollusc a mate," and spread the word using the hashtag #snaillove. As Popular Science charmingly says, "even snails use online dating."

Almost immediately, Jeremy, who was originally discovered in a London compost heap, became a media sensation in the U.K. and beyond — a "shellebrity," as Davison puts it.

"We didn't really know how big a hope it would be, or the chances of success, to find one," he says. "But it worked — we found two." 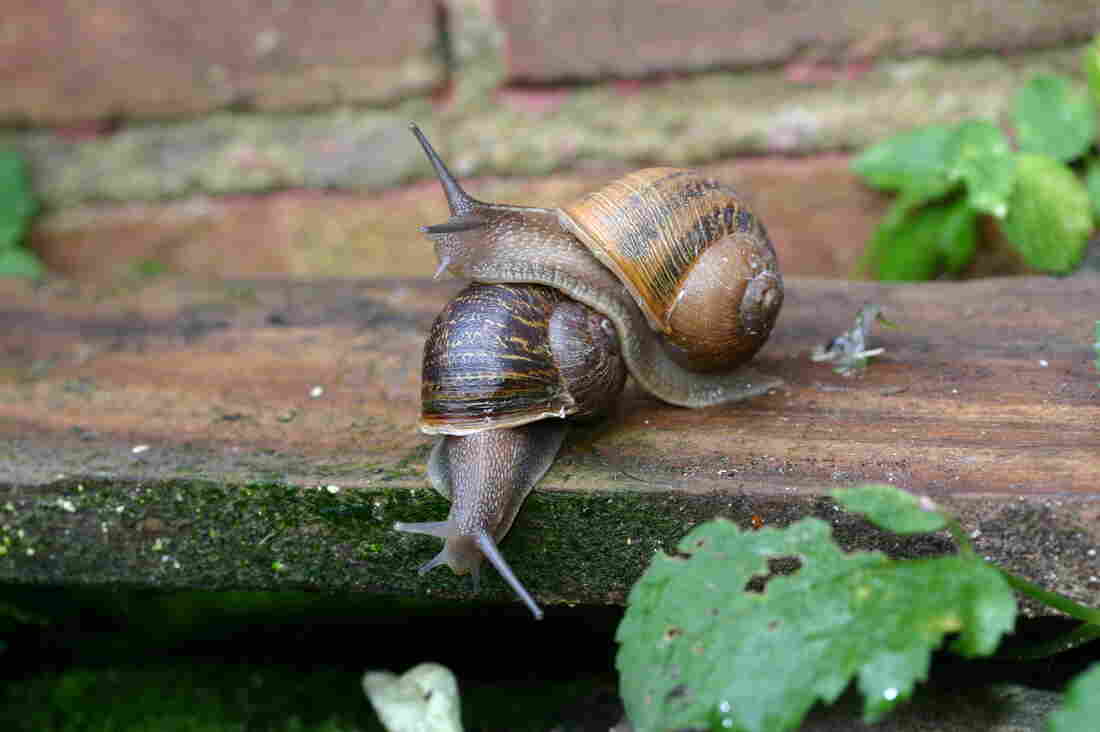 The owners of the two possible mates have very different stories. "Both of them are snail enthusiasts. Both think people should know more about snails. But apart from that, nothing in common," Davison adds.

Contestant No. 1: A snail named "Lefty," a pet to a snail enthusiast near Ipswich, U.K. She got in touch as soon as she heard about the appeal, Davison says.

Contestant No. 2: A snail in Majorca, Spain, found by a snail farmer who runs a restaurant that specializes in — you guessed it — snails. The farmer heard about the appeal and then, Davison says, "amazingly a couple of days later, he came across one that coils the other way, in preparing snails prior to them being cooked."

Jeremy has already met Lefty — "you can call it a honeymoon, if you like," Davison says. The two have been observed "flirting, which means "gentle biting," but he says he's "fairly confident that they haven't mated yet."

The way snails mate is "fantastically bizarre," Davison says. The carnal act is known as "traumatic insemination," and copulation kicks off by mutually stabbing each other with "love darts" — tiny calcium spears that transfer a hormone. Snails are simultaneous hermaphrodites, he says, meaning that they are both male and female at the same time and will "reciprocally fertilize each other" and ultimately each produce offspring.

In a further twist, snails can reproduce on their own because they are hermaphrodites. But Davison says this happens "very rarely but they'd much prefer to mate with another snail." Inbreeding, he notes, is "generally not a good strategy."

The idea is for Jeremy to spend time with Lefty until they have mated — and that'll be clear because the so-called love darts are fairly large structures that will be visible in the tank.

Their offspring will provide an answer to one big question: Will breeding the two snails result in more lefty shells or will their offspring sport clockwise coils?

Even if Jeremy and Lefty find love, Davison says his team is also exploring ways to introduce Jeremy to the snail from Majorca.

Earlier this year, his team published research in Current Biology that suggested the gene that causes a snail's shell to twist counter-clockwise could also "offer clues to how the same gene affects body asymmetry in other animals including humans."