Accessibility links
Chinese Construction Workers Set Off Dynamite And Uncover 'New' Dinosaur Species : The Two-Way Workmen building a high school in southern China were blasting through bedrock – and when the dust settled, they found they had uncovered a well-preserved dinosaur skeleton. 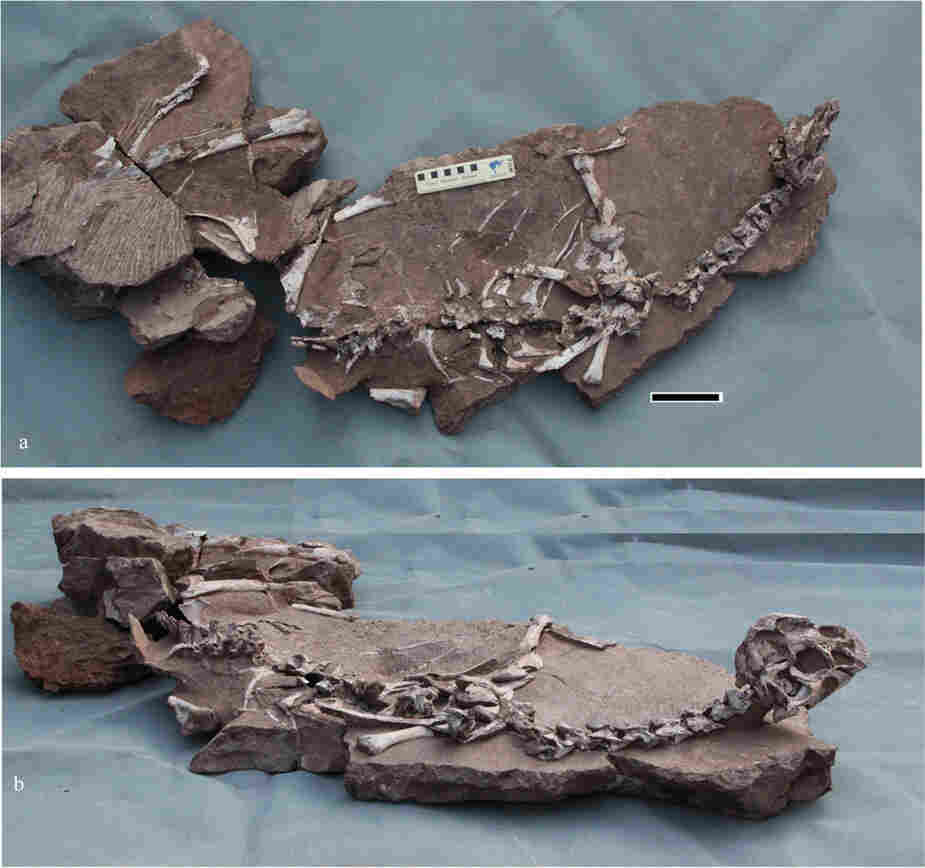 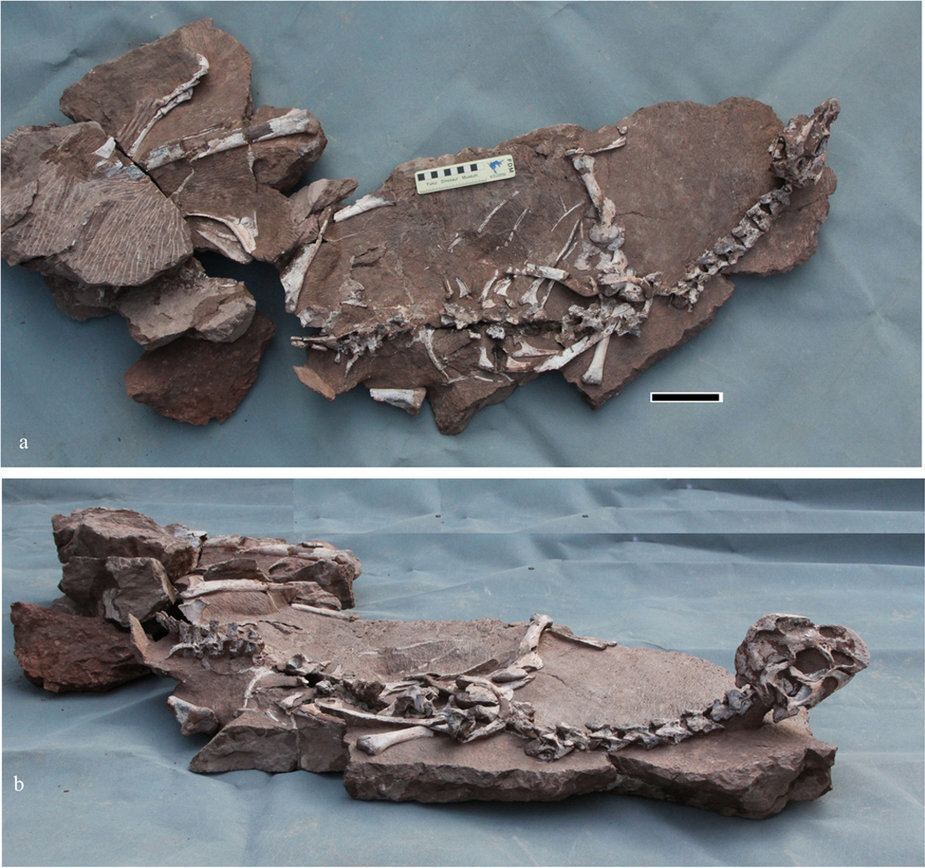 Workmen building a high school in southern China were dynamiting through bedrock – and when the dust settled, they found they had inadvertently uncovered a well-preserved dinosaur skeleton.

It turned out to be the first example of its species, which scientists have poetically named Tongtianlong limosus. That translates to "muddy dragon on the road to heaven." It's a reference to the way scientists think the creature died – attempting to fight its way out of a pool of mud, which over the centuries turned to rock.

"It's a very find line. ... This thing was almost blown to smithereens, to the point we would never even have known it existed," University of Edinburgh paleontologist Stephen Brusatte tells The Two-Way. "Thankfully there were workmen using dynamite that day, and thankfully they put that dynamite at the perfect place so that it revealed instead of destroyed the fossil."

The fossil sustained some limited damage to its back end but remains extremely well preserved, he says. Brusatte and his colleagues recently published a paper in Scientific Reports about the find. He says the dinosaur was entombed in an unusual position: "Its head is sticking up, its neck is arched, its arms are both sticking out to the side like it's trying to free itself."

That means the fossil is especially evocative, he adds. "When you look at this fossil you can really sense the animal, the living animal that was struggling, that was dying and that ultimately did die."

The species is a theropod, which means it's from the same group as Tyrannosaurs and Velociraptors. But Tongtianlong limosus, which was about the size of a sheep or a donkey, was much more bird-like than those relatives, the scientists say. Its body would have been covered in feathers, including two small wings, though it could not fly.

Additionally, the teeth of its ancestors had by this point evolved to a beak, Brusatte said, and it likely had a varied diet that may have included meat, shellfish, eggs and even plants.

"If you saw this thing alive, I think you would have just thought, hey, that's a funny looking bird, in kind of the same way that we think about ostriches or emus," he adds. Check out this artist's rendition of what the dinosaur might have looked like: 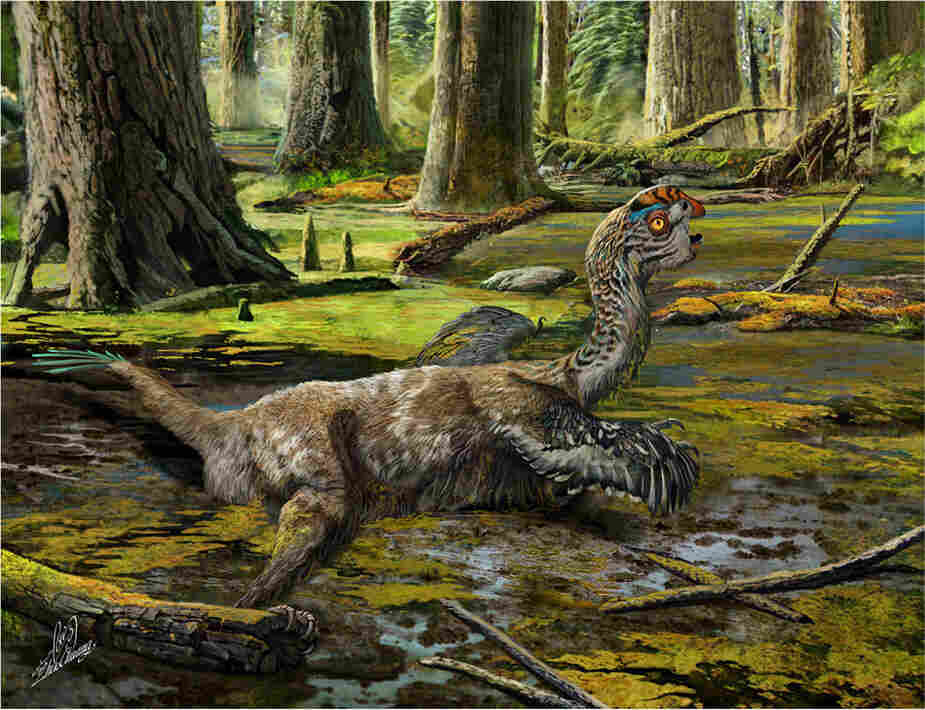 An artist's rendition of what Tongtianlong limosus' last-ditch struggle in the mud may have looked like. Zhao Chuang/Scientific Reports hide caption

Tongtianlong limosus were "some of the last dinosaurs to thrive before the asteroid came 66 million years ago and ended everything in an instant," at a time of extraordinary species diversification in the late Cretaceous period, Brusatte says.

That shows in recent discoveries in the area: this species is the sixth new type of oviraptorosaurs (bird-like theropods) that workmen in southern China have found in the last few years, he says. "They were radiating, they were blossoming. ... This was very active, very rich, diverse environment."

While Tongtianlong limosus didn't survive the asteroid, scientists are certainly pleased it weathered that much smaller dynamite blast.