Accessibility links
After Powerful Quake, Tourists, Residents (And Cows) Stranded In New Zealand : The Two-Way At least two people died in Sunday's powerful quake, which has been followed by a series of aftershocks. Highways and railroads are destroyed; military aircraft are preparing to drop supplies. 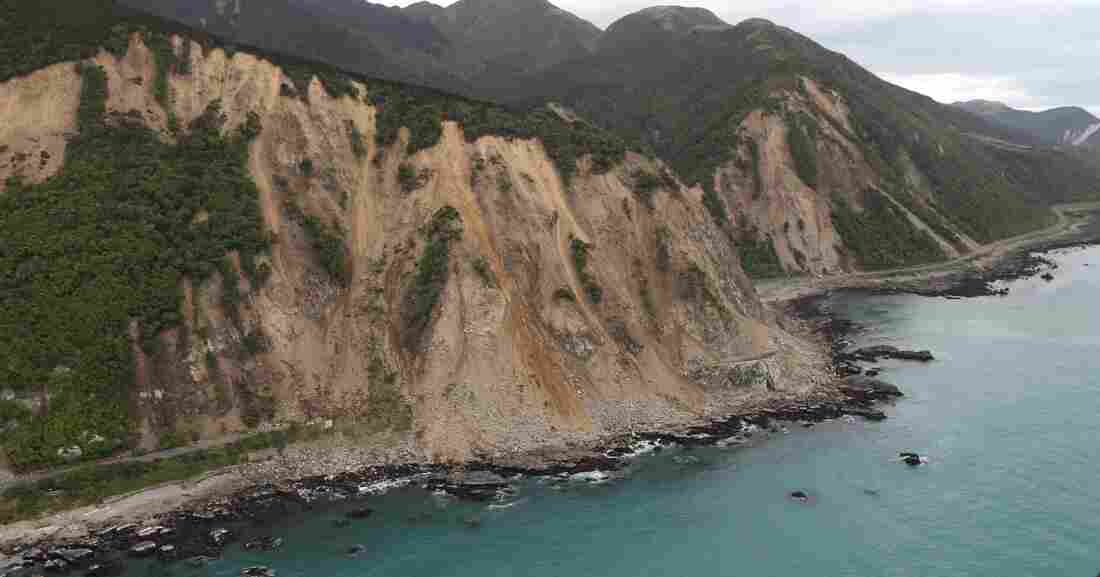 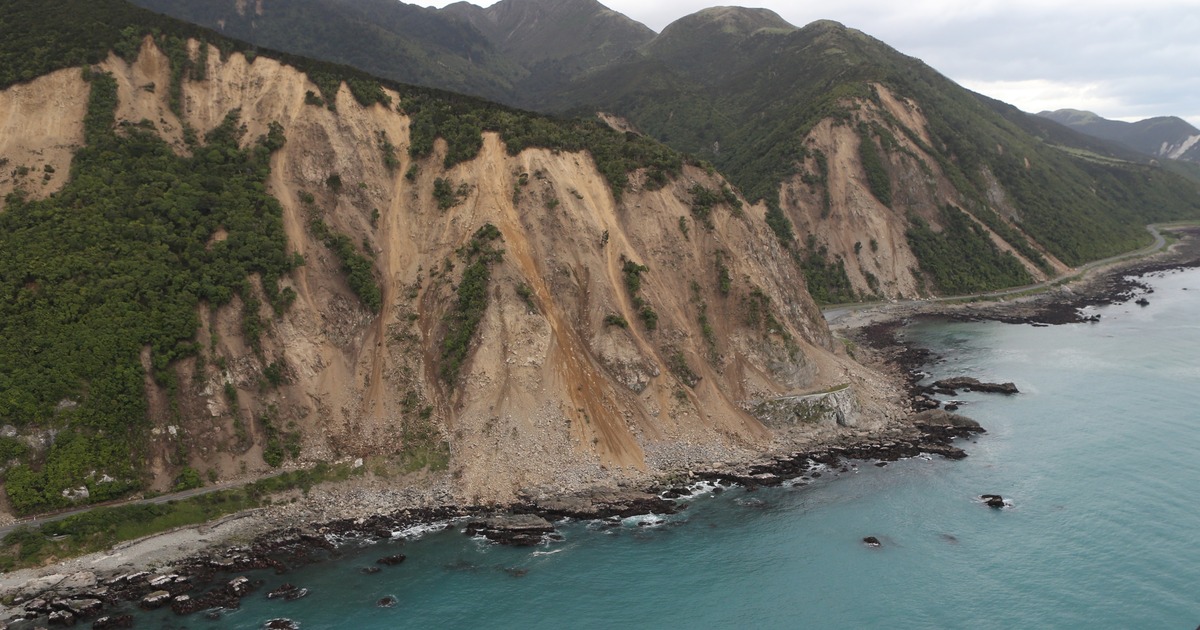 After a powerful earthquake struck New Zealand on Sunday, several vital railroads and highways have been destroyed, stranding more than a thousand people in the affected region.

At least two people died in the Sunday night earthquake, which was magnitude 7.8 and triggered a small tsunami.

Since then, visitors and residents alike have also been grappling with a series of aftershocks — including several at magnitude 6.0 or higher. 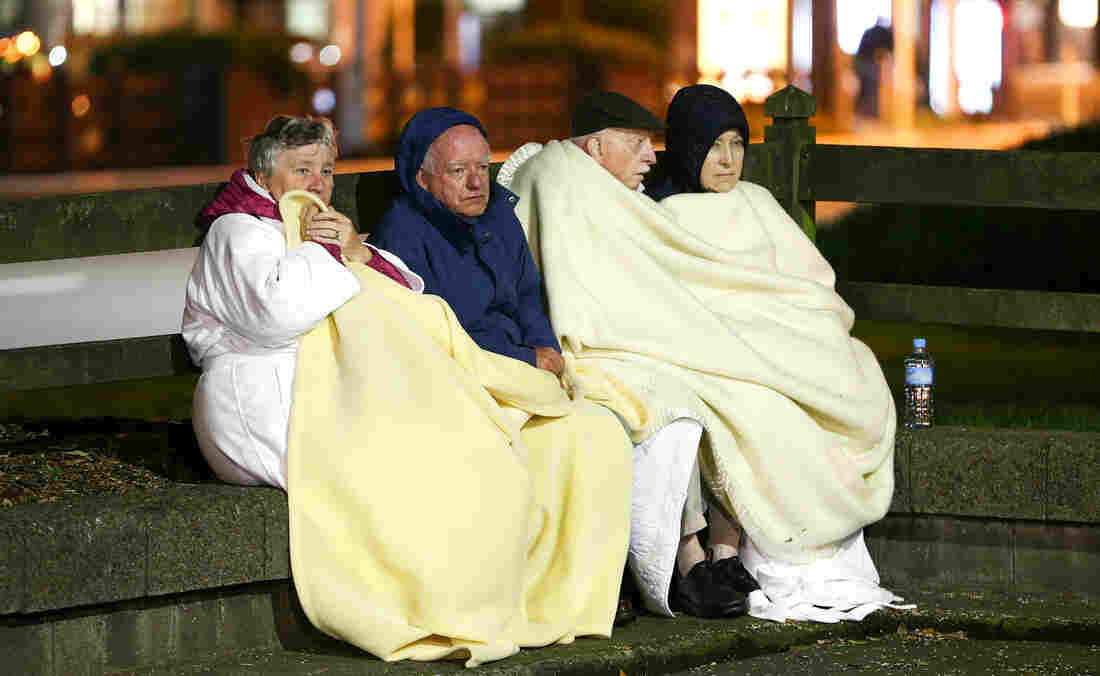 Amora Hotel guests gather in a parking lot in Wellington, New Zealand, on Monday, a day after a powerful earthquake struck the region. A series of aftershocks kept residents and tourists on guard. Hagen Hopkins/Getty Images hide caption 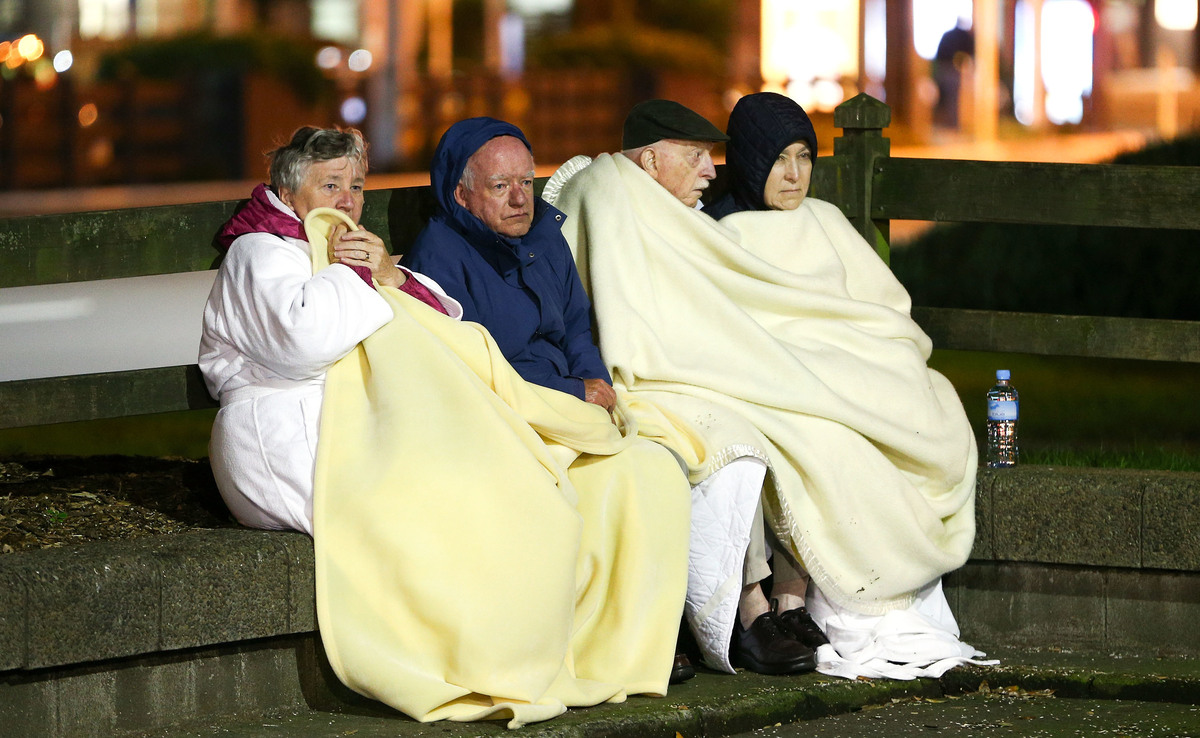 Amora Hotel guests gather in a parking lot in Wellington, New Zealand, on Monday, a day after a powerful earthquake struck the region. A series of aftershocks kept residents and tourists on guard.

Stuart Cohen, reporting for NPR from Sydney, said military aircraft will be taking in tons of supplies and ferrying out hundreds of stranded tourists.

"New Zealand Prime Minister John Key says the damage is worse than expected," Cohen reports. "After flying over the region between Christchurch and the capital, Wellington, that was hardest hit by Sunday night's earthquake, Key told Radio New Zealand he saw the country's main highway and rail lines cut in several places."

Hundreds of residents and about a thousand tourists are stuck in the coastal town of Kaikoura without access to functioning roads or trains, The Associated Press reports. 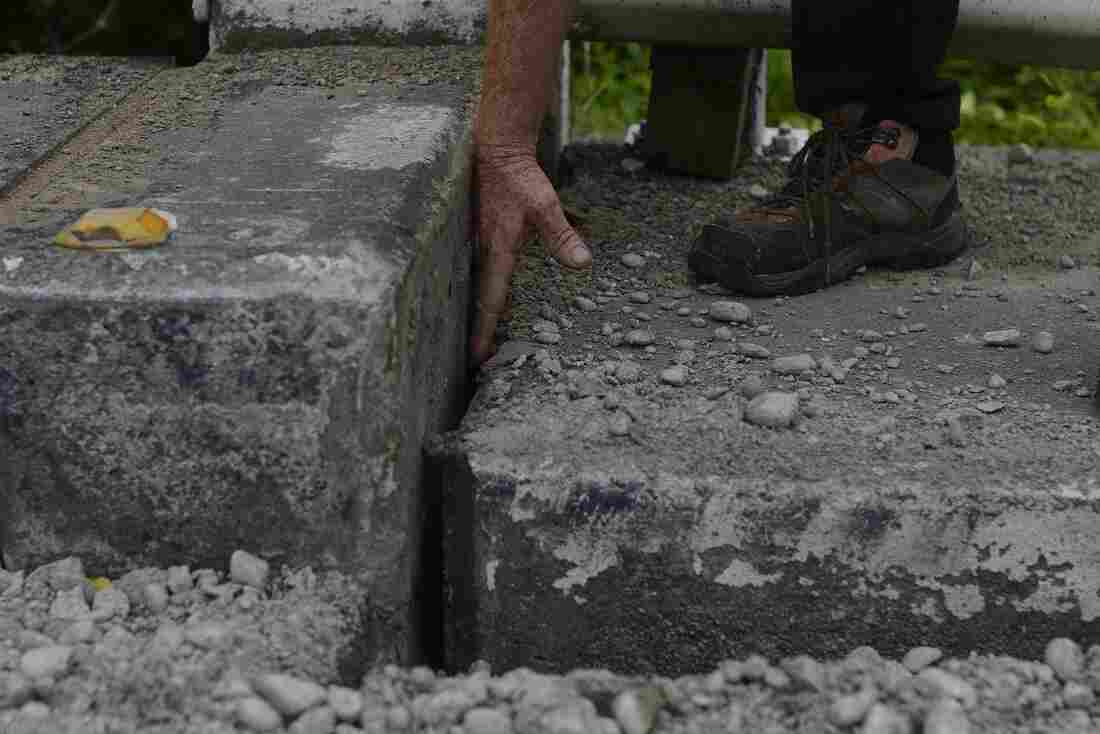 Water supplies and sewer systems were also knocked out by the quake. The wire service has more:

" 'From all directions, Kaikoura has essentially been isolated,' Air Commodore Darryn Webb, the Acting Commander of New Zealand's Joint Forces, told The Associated Press. 'There's a real imperative to support the town because it can't support itself.'

"Webb said the military planned to begin using four NH90 helicopters on Tuesday that could each transport about 18 people out of the town at a time. He said a ship was also leaving Auckland on Monday night that could potentially pick up hundreds of people if weather conditions allowed. ...

"He said the weather forecast wasn't looking great and the operation could take several days. He said that if needed, a C-130 military transport plane could drop fuel, water, food and other supplies to the town."

Cohen says winds of more than 90 mph are forecast for the region.

It's unclear how long it will take to handle immediate evacuations and aid drops. Key predicts that full cleanup and repair operations could take months and will cost billions of dollars, the AP says.

It's not just humans who were stranded by the earthquake: Three cows near Kaikoura also appeared to be stuck without any clear way out.

The lucky quake survivors, two adult cattle and a calf, were caught on camera on a small island of grass surrounded by deep ravines. Here's video, via The Guardian:

"It was not immediately clear who owned the cattle or what was being done to help them," the AP wrote in a brief story about the bovines in distress. (Headline: "Nowhere to Mooove.")

New Zealand's location on the Pacific "Ring of Fire," home to a great deal of seismic and volcanic activity, means earthquakes are fairly common.

Sunday's quake was much stronger, but the damage was reduced because the epicenter was in a rural area, the AP writes. 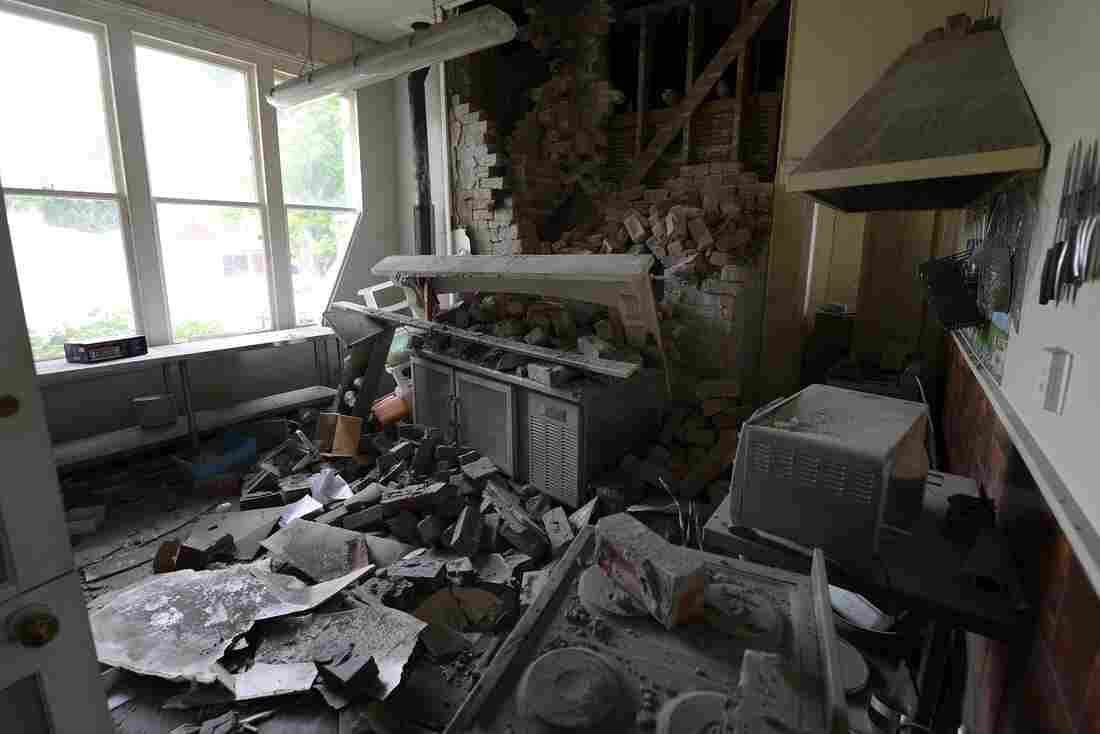 The Waiau Lodge Hotel, in Waiau, about 75 miles north of Christchurch, New Zealand, shows damage on Monday in the aftermath of a strong earthquake. Matias Delacroix/Getty Images hide caption 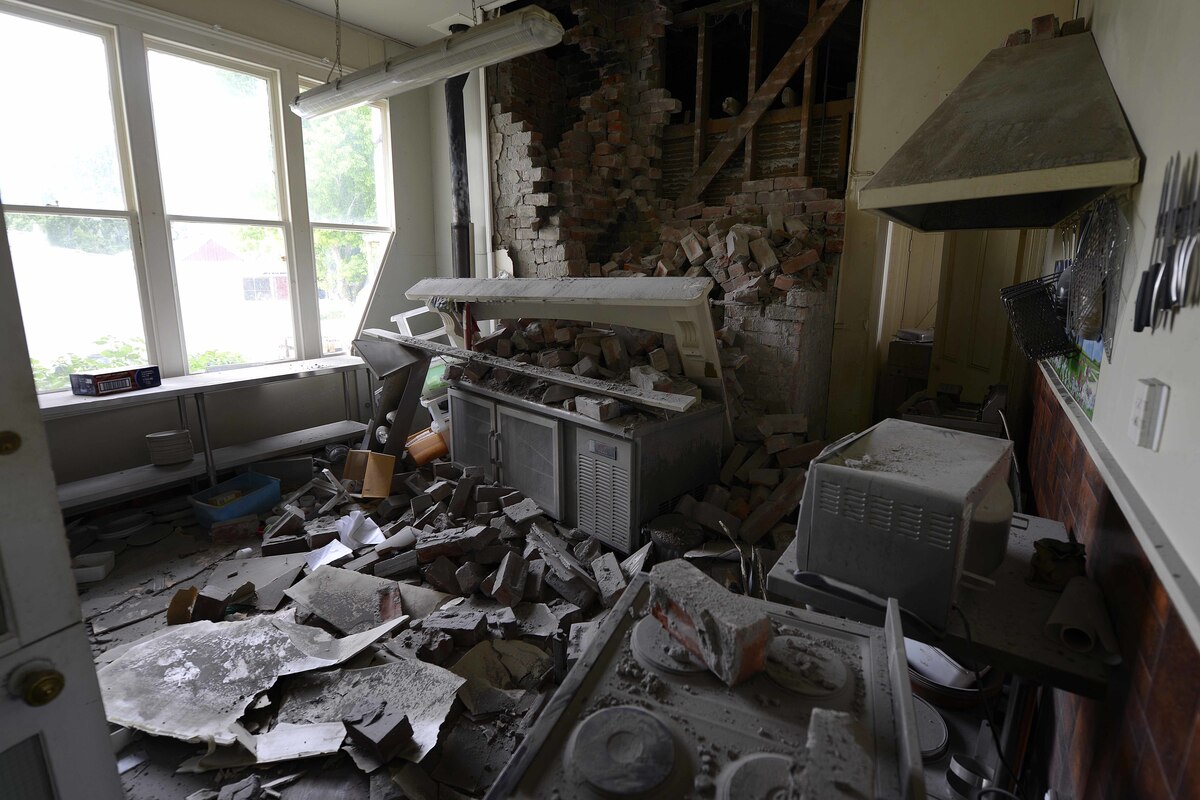 The Waiau Lodge Hotel, in Waiau, about 75 miles north of Christchurch, New Zealand, shows damage on Monday in the aftermath of a strong earthquake.