Accessibility links
Prosecutors Question Julian Assange Over Sex-Crime Accusations : The Two-Way The WikiLeaks founder has spent years in the Ecuadorean Embassy in London, to avoid extradition for questioning over alleged sexual misconduct. Now he's taking questions after all — at the embassy. 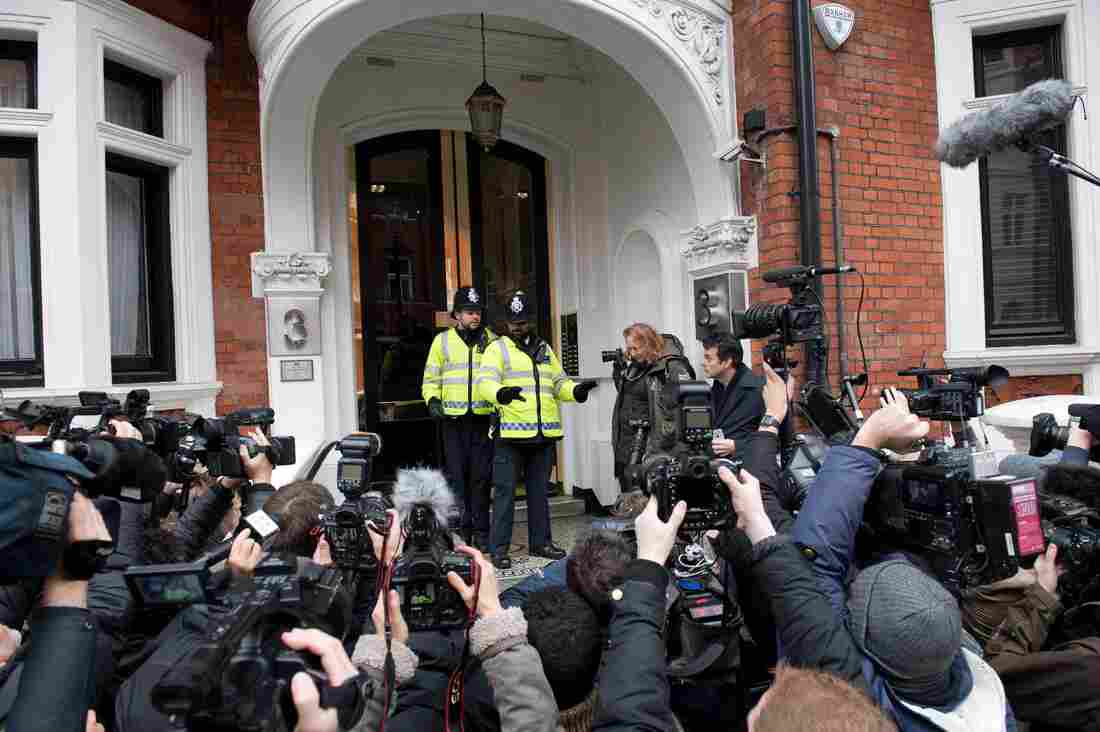 Police officers are surrounded by media as they stand outside the Ecuadorean Embassy in London on Monday, where WikiLeaks founder Julian Assange was set to be questioned over a rape allegation against him. Justin Tallis/AFP/Getty Images hide caption 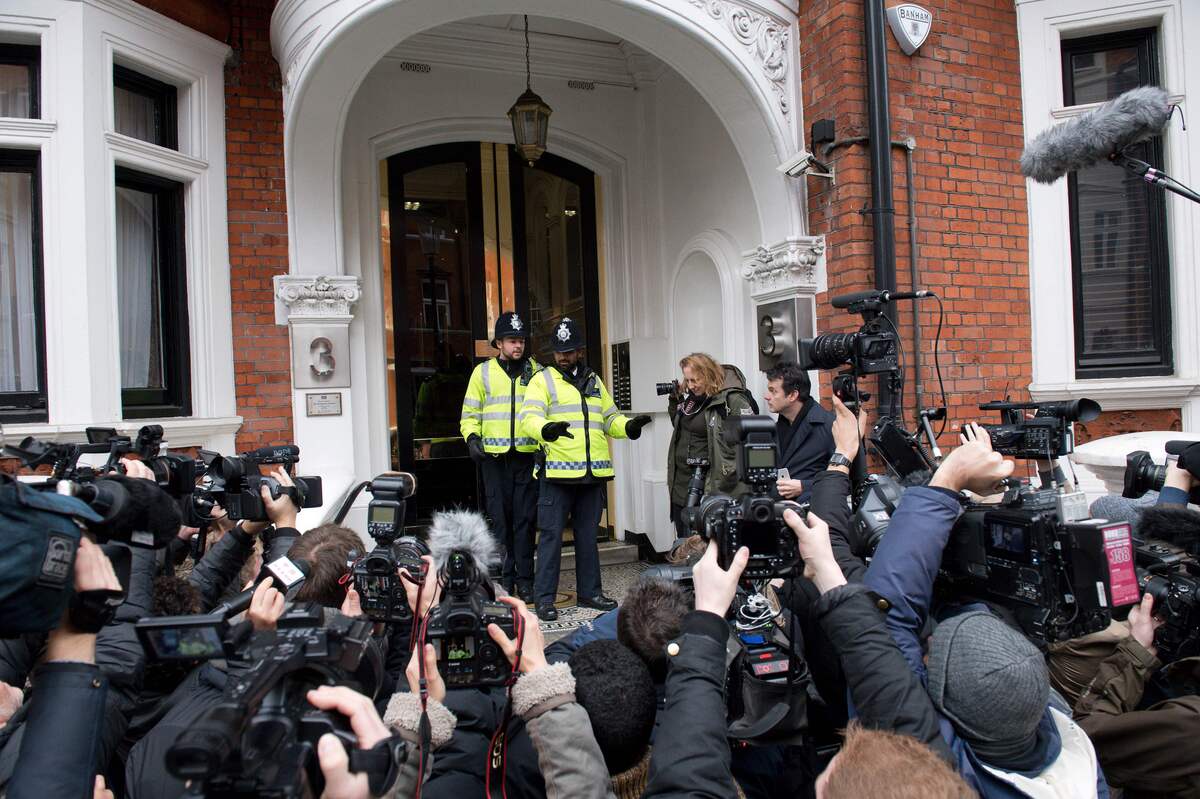 Police officers are surrounded by media as they stand outside the Ecuadorean Embassy in London on Monday, where WikiLeaks founder Julian Assange was set to be questioned over a rape allegation against him.

Swedish authorities have been trying for years to question Assange. They say they need to interview him before making a decision about whether to press charges in the case, which began when two women accused Assange of sexual misconduct, including rape, in Sweden.

Assange, who denies the accusations, took refuge at the Ecuadorean Embassy in London four years ago to avoid extradition to Sweden for questioning. He has remained there ever since, running WikiLeaks from inside the embassy. Since he took refuge, the statute of limitations has run out on some of the accusations, but prosecutors are continuing to investigate the rape allegation.

Last week, Swedish authorities announced they had worked out an arrangement with Ecuador to allow them to interview Assange.

Larry Miller, reporting for NPR from London, said the agreement calls for Swedish prosecutors and police to be present for the questioning. An Ecuadorean official will actually ask the questions.

The questioning could take several days, The Associated Press reports.

Civil rights activist Peter Tatchell told the AP that Assange was being "hounded" because of what he called WikiLeaks' revelations about the actions of major governments, including the U.S.

Assange, for his part, has maintained that concern over state-sponsored retaliation against him is the reason he refuses to travel to Sweden for questioning. Here's more from Miller:

"Assange, who denies the [sex crime] accusations, has not left the embassy where he has been given asylum since jumping bail more than four years ago. He says he fears being sent to the U.S. and tried for releasing hundreds of thousands of classified documents.

"Ecuador has asked Sweden and Britain for guarantees Assange will not be extradited to a third country, but such assurances have not been forthcoming."

The AP has details on the allegations in the case:

"The sex crime allegations were made shortly after Assange and WikiLeaks became well known worldwide for releasing hundreds of thousands of pages of classified government documents.

"In Sweden, having sex with an unconscious, drunk or sleeping person can lead to a rape conviction punishable by up to six years in prison."

Assange initially faced four allegations, including unlawful coercion and sexual molestation, as we have reported. But three of the four have since expired, under Swedish statutes of limitations, and only the allegation of rape is currently being investigated.

WikiLeaks has been in the headlines over the past few months for its role in the U.S. elections. The organization released emails stolen from the Democratic National Committee and others it identified as being from Hillary Clinton campaign manager John Podesta. U.S. intelligence officials have said they believe the Russian government was involved in the hacking of some of the documents WikiLeaks released. Russian President Vladimir Putin has said the question of responsibility is "irrelevant."

In response to the election-related releases, Ecuador restricted Assange's Internet access. The Ecuadorean government released a statement saying it "respects the principle of non-intervention in the internal affairs of other states" and was temporarily restricting the Internet to limit Assange's communications, but without stopping WikiLeaks from "journalistic activities."