Accessibility links
Gigantic Shield Moves Into Place To Cover Exploded Chernobyl Reactor : The Two-Way It's billed as the "largest movable land-based structure ever built," and it is an important step toward ultimately dismantling the reactor. The 1986 blast was the world's worst nuclear disaster.

This time-lapse photography shows the giant shield that is being moved to cover the Chernobyl reactor in Ukraine that exploded in 1986. It will take up to five days to move the shelter over the reactor.

In Chernobyl, the site of the world's worst nuclear disaster, a giant protective shield is slowly being moved into place a couple of feet at a time. The concrete and steel arch is billed as the "largest movable land-based structure ever built," and it is seen as an important step toward ultimately securing and dismantling the still dangerous reactor.

The shield, which was built over several years in the shadow of the Chernobyl reactor, is designed to secure the site for at least 100 years.

Ukraine's Minister of Ecology and Natural Resources Ostap Semerak called this "the beginning of the end of a 30-year-long fight with the consequences of the 1986 accident." He said that some 40 countries were involved in the effort and pointed to this as proof that "environmental safety remains a priority for global policymakers."

Immediately after the 1986 meltdown, a hastily built concrete shelter, known as a sarcophagus, was constructed to contain the radioactive fallout. The Chernobyl site was part of the Soviet Union at the time, but is now part of northern Ukraine, near its border with Belarus.

The sarcophagus is now showing signs of aging, as Claire Corkhil, who studies the dangers of nuclear waste, wrote in The Conversation.

"Water dripping from the sarcophagus roof has become radioactive and leaks into the soil on the reactor floor; birds have been sighted in the roof space," she said. "Every day, the risk of the sarcophagus collapsing increases, along with the risk of another widespread release of radioactivity to the environment." 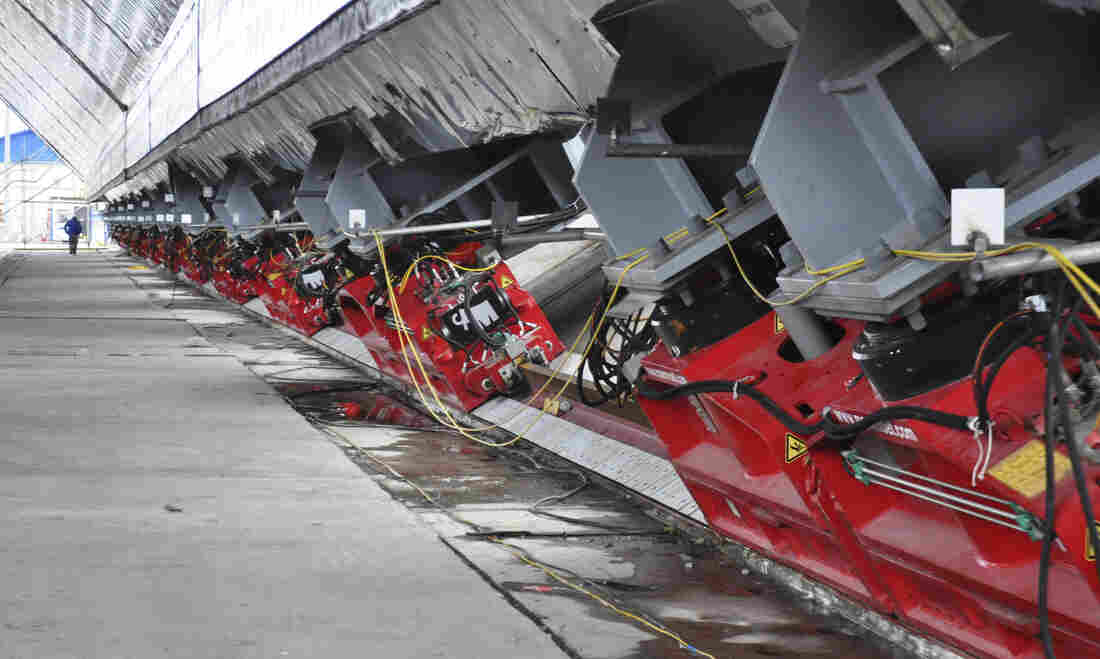 A worker walks past the hydraulic jacks at the base of the massive shield that is being moved into place to cover the Chernobyl nuclear reactor. AP hide caption

It "will make the site safe and allow for the eventual dismantling of the aging shelter currently housing the reactor and the management of the radioactive waste within the structure," according to the European Bank for Reconstruction and Development, which led the project and administers its funding.

The 1986 explosion and its aftermath killed dozens of cleanup workers and has been blamed for thousands of subsequent deaths believed to be linked to radiation exposure from the site, though the exact number is disputed. Many birth defects in the region have also been blamed on radiation from Chernobyl.

As NPR's Chris Joyce has reported, "plumes of radioactive smoke spread for thousands of square miles across Ukraine, the former Soviet Union, Europe and Scandinavia."

The massive shield, known as New Safe Confinement, presented major construction challenges. It was initially built in two halves and joined together last year, according to the EBRD. Moving it into place now is a huge undertaking.

Engineers began sliding the structure on Monday, using a "special skidding system that consists of 224 hydraulic jacks to push the arch 60 centimetres (2 feet) each stroke."

The shield must be moved more than 350 yards to reach the destroyed reactor, the EBRD said, a process that could take up to five days.

The huge structure spans nearly the length of three football fields and weighs some 36,000 tons, the EBRD added. It's tall enough to contain the Statue of Liberty. The project will cost $1.6 billion.

Semerak also called this an important step toward improving the safety in Chernobyl's exclusion zone, which stretches 19 miles from the site of the meltdown.

A caption accompanying a video on this post previously stated that the shield being moved into place at the destroyed Chernobyl nuclear power plant is radioactive. It is meant to contain radioactive waste but is itself not radioactive.