Accessibility links
USGS Announces Largest Oil And Gas Deposit Ever Assessed In U.S. : The Two-Way The agency says the so-called Wolfcamp shale in Texas contains 20 billion barrels of oil and 16 trillion cubic feet of natural gas that are recoverable by hydraulic fracturing and other means. 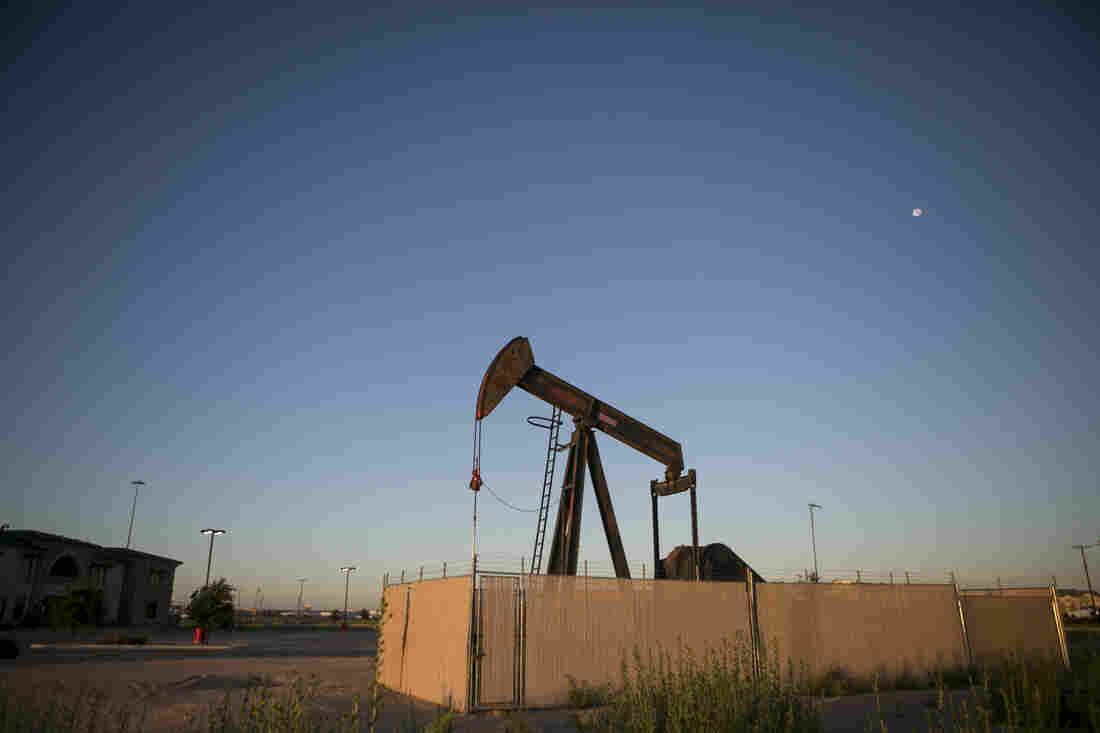 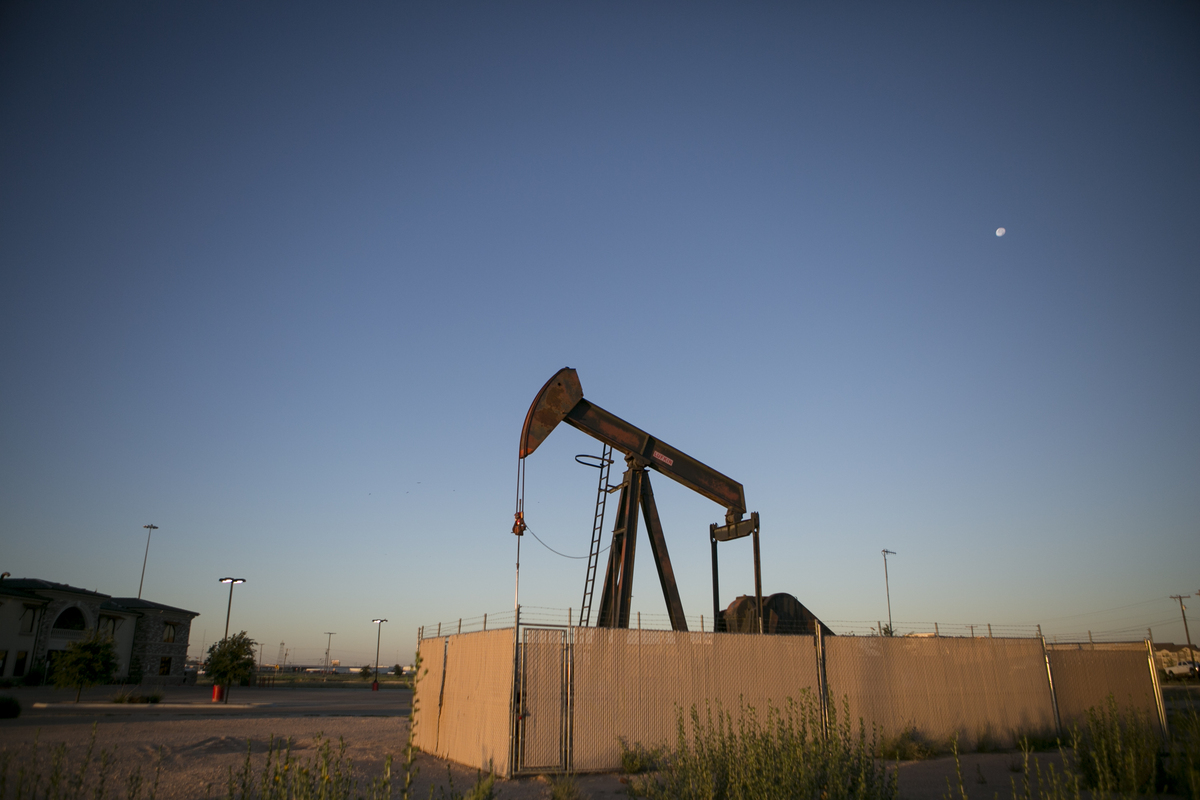 The U.S. Geological Survey says a deposit in West Texas is the largest continuous oil and gas deposit ever discovered in the United States.

On Tuesday, the USGS announced that an area known as the Wolfcamp shale contains 20 billion barrels of oil and 16 trillion cubic feet of natural gas.

That is nearly three times more petroleum than the agency found in North Dakota's Bakken shale in 2013.

As NPR's Jeff Brady reported, the amount of oil in the Wolfcamp shale formation is nearly three times the amount of petroleum products used by the entire country in a year.

The USGS says all 20 billion barrels of oil are "technically recoverable," meaning the oil could be brought to the surface "using currently available technology and industry practices."

"The Texas discovery is in a place that has been drilled before by conventional methods," Jeff reported for NPR's Newscast Unit. "But now that oil companies use horizontal drilling and hydraulic fracturing — or fracking — they can access reserves that previously were out of reach."

"Changes in technology and industry practices can have significant effects on what resources are technically recoverable, and that's why we continue to perform resource assessments throughout the United States and the world," said Walter Guidroz, a program coordinator for the USGS Energy Resources Program, in the USGS statement.

"Even in areas that have produced billions of barrels of oil, there is still the potential to find billions more," he said.

The complete oil and gas assessment is publicly available here. A map shows the six separately assessed regions, designated according to depth by the petroleum industry, that make up the Wolfcamp shale. 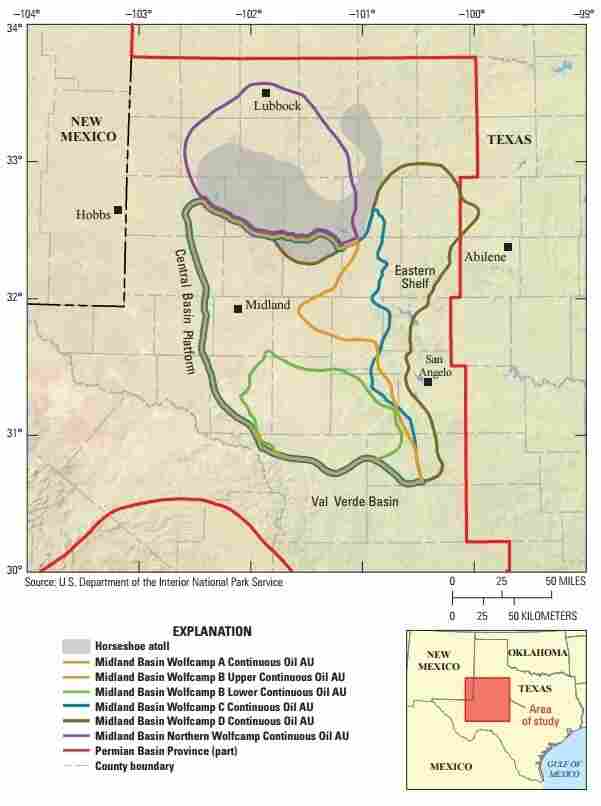 A map of the Wolfcamp shale formation. The red line denotes the boundary of the Permian Basin province; the rest of the thick colored lines denote areas of newly discovered petroleum, at varying depths. U.S. Department of the Interior National Park Service hide caption 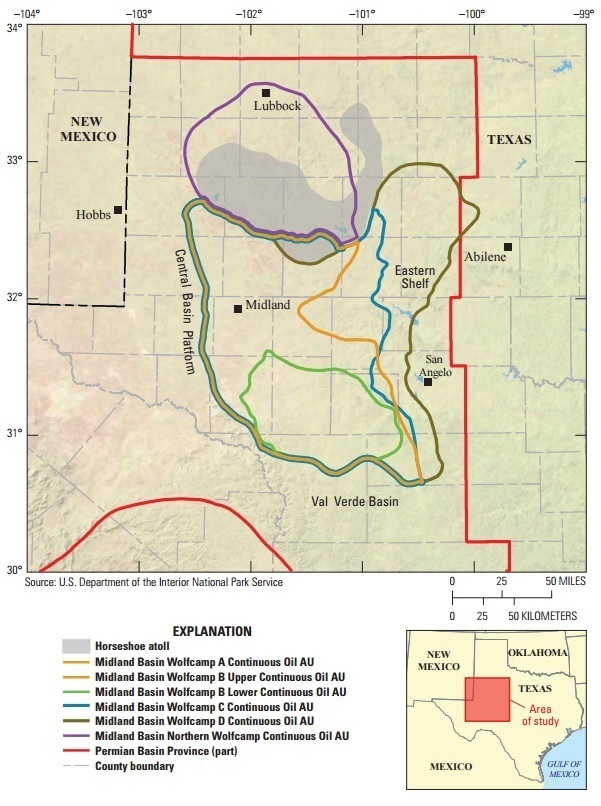 A map of the Wolfcamp shale formation. The red line denotes the boundary of the Permian Basin province; the rest of the thick colored lines denote areas of newly discovered petroleum, at varying depths.

Private companies have already been moving to extract the oil, which Bloomberg News reports is worth $900 billion at current prices.

The company Pioneer Natural Resources, which has drilling rights for 785,000 acres in the Wolfcamp area, says on its website that it shut down its vertical drilling operation there in 2015, in favor of developing more horizontal drilling into the Wolfcamp shale.

"ConocoPhillips, the world's largest independent oil producer by market value, increased its estimate for the size of its Wolfcamp holdings on Nov. 10 to 1.8 billion barrels from 1 billion last year. A day earlier, Concho Resources CEO Timothy Leach told investors and analysts that two recent wells it drilled in the Wolfcamp were pumping an average of 2,000 barrels a day each."

The economic effects of extracting the oil and gas from the Wolfcamp shale could be enormous. In North Dakota, a shale-driven oil boom has transformed the landscape and the economy in the past few years, attracting thousands of workers and contributing to falling oil prices.

In some cases, towns that grew quickly when the Bakken shale first started producing oil are now facing steep shortfalls in revenue as the price of oil drops, as we have reported. Falling prices have already hurt Midland, Texas, which is surrounded by oil fields and is in the center of the Wolfcamp shale area.

The U.S. has produced more oil and natural gas than any other country every year since 2012, according to the U.S. Energy Information Administration.

Producing and using the newly discovered oil and gas will also contribute to climate change, since both oil and gas emit greenhouse gases when they are extracted and burned using current technology. The U.S. has pledged to reduce greenhouse gas emissions economywide 26 percent to 28 percent by 2025 under the Paris climate agreement, which went into effect earlier this month.

Editor's Note: This post has been updated to clarify that the USGS did not originally discover the Wolfcamp shale formation, and that the announcement concerned its assessment of the magnitude of the oil and gas deposit.