Accessibility links
These Are The 21 People Receiving The Nation's Highest Civilian Honor : The Two-Way President Obama has announced the last group of people that he will honor with the Presidential Medal of Freedom, including Michael Jordan, Diana Ross, Frank Gehry and Vin Scully.

These Are The 21 People Receiving The Nation's Highest Civilian Honor

These Are The 21 People Receiving The Nation's Highest Civilian Honor 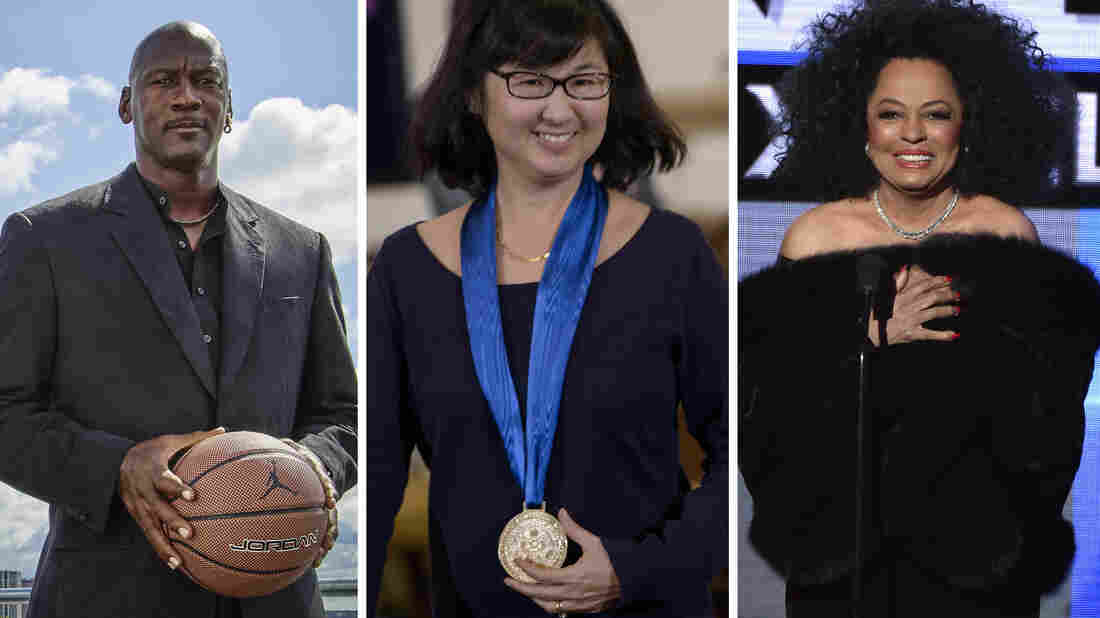 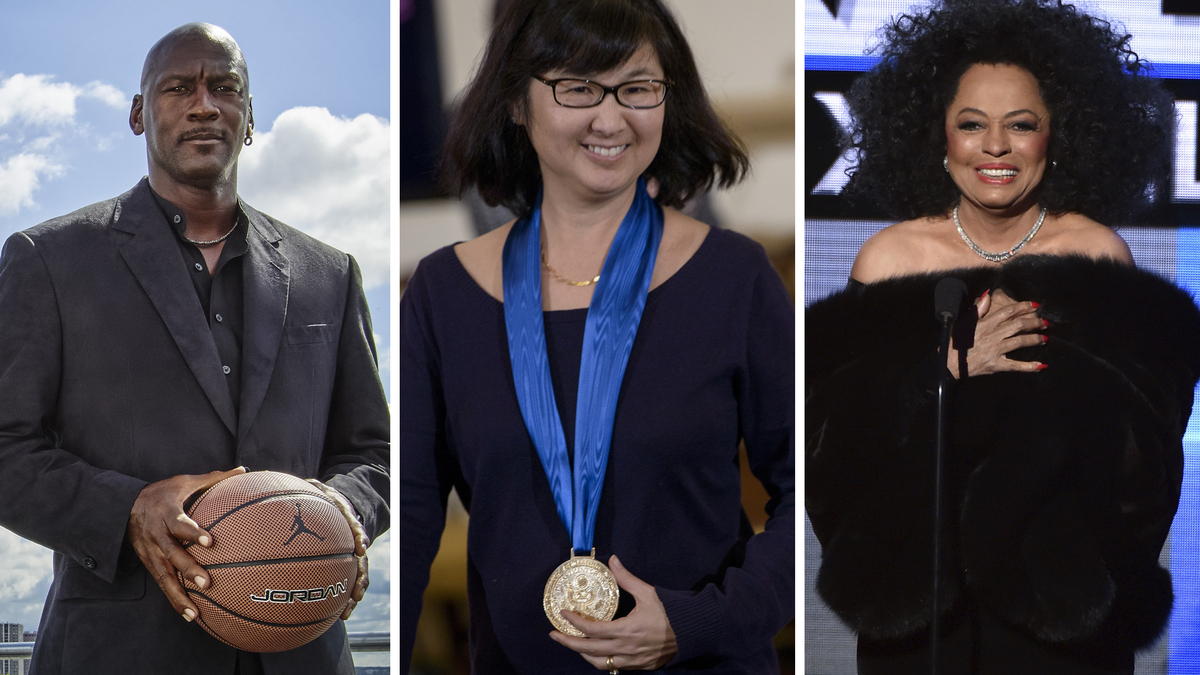 Michael Jordan, artist Maya Lin and Diana Ross were announced as some of the 21 honorees of the 2016 Medal of Honor, the nation's highest civilian honor.

President Obama has announced the last group of people to whom he will award the Presidential Medal of Freedom, the nation's highest civilian honor.

The group also honors inspiring people who may not be household names, such as Native American community leader and advocate Elouise Cobell and computer code pioneer Grace Hopper, both of whom are deceased.

"The Presidential Medal of Freedom is not just our nation's highest civilian honor — it's a tribute to the idea that all of us, no matter where we come from, have the opportunity to change this country for the better," Obama said. "From scientists, philanthropists, and public servants to activists, athletes and artists, these 21 individuals have helped push America forward, inspiring millions of people around the world along the way."

They will receive the medals at a ceremony at the White House on Nov. 22, and it will be streamed live. Obama has previously said the annual event is one of his favorites.

Here's how the White House describes the 21 people who will receive the award, and their accomplishments:

Kareem Abdul-Jabbar is the National Basketball Association's all-time leading scorer who helped lead the Los Angeles Lakers to five championships and the Milwaukee Bucks to another. During his career, Abdul-Jabbar was a six-time NBA Most Valuable Player and a 19-time NBA All-Star. Before joining the NBA, he was a star player at UCLA, leading the Bruins to three consecutive championships. In addition to his legendary basketball career, Abdul-Jabbar has been an outspoken advocate for social justice.

Elouise Cobell was a Blackfeet Tribal community leader and an advocate for Native American self-determination and financial independence. She used her expertise in accounting to champion a lawsuit that resulted in a historic settlement, restoring tribal homelands to her beloved Blackfeet Nation and many other tribes, and in so doing, inspired a new generation of Native Americans to fight for the rights of others. Cobell helped found the Native American Bank, served as director of the Native American Community Development Corporation, and inspired Native American women to seek leadership roles in their communities.

Ellen DeGeneres is an award-winning comedian who has hosted her popular daytime talk show, The Ellen DeGeneres Show, since 2003 with her trademarked humor, humility, and optimism. In 2003 Ellen lent her voice to a forgetful but unforgettable little fish named Dory in Finding Nemo. She reprised her role again in 2016 with the hugely successful Finding Dory. Ellen also hosted the Academy Awards twice, in 2007 and 2014. In 1997, after coming out herself, DeGeneres made TV history when her character on Ellen revealed she was a lesbian. In her work and in her life, she has been a passionate advocate for equality and fairness.

Robert De Niro has brought to life some of the most memorable roles in American film during a career that spans five decades. His first major film roles were in the sports drama Bang the Drum Slowly and Martin Scorsese's crime film Mean Streets. He is a seven-time Academy Award nominee and two-time Oscar winner, and is also a Kennedy Center honoree.

Richard Garwin is a polymath physicist who earned a Ph.D. under Enrico Fermi at age 21 and subsequently made pioneering contributions to U.S. defense and intelligence technologies, low-temperature and nuclear physics, detection of gravitational radiation, magnetic resonance imaging (MRI), computer systems, laser printing, and nuclear arms control and nonproliferation. He directed Applied Research at IBM's Thomas J. Watson Research Center and taught at the University of Chicago, Columbia University, and Harvard University. The author of 500 technical papers and a winner of the National Medal of Science, Garwin holds 47 U.S. patents, and has advised numerous administrations.

Bill and Melinda Gates established the Bill & Melinda Gates Foundation in 2000 to help all people lead healthy, productive lives. In developing countries, the foundation focuses on improving people's health and giving them the chance to lift themselves out of hunger and extreme poverty. In the United States, the mission is to ensure that all people—especially those with the fewest resources—have access to the opportunities they need to succeed in school and life. The Gates Foundation has provided more than $36 billion in grants since its inception.

Frank Gehry is one of the world's leading architects, whose works have helped define contemporary architecture. His best-known buildings include the Walt Disney Concert Hall in Los Angeles, the Dancing House in Prague, and the Guggenheim Museum building in Bilbao, Spain.

Margaret H. Hamilton led the team that created the on-board flight software for NASA's Apollo command modules and lunar modules. A mathematician and computer scientist who started her own software company, Hamilton co-created the concepts of asynchronous software, priority scheduling, and human-in-the-loop decision capability, which set the foundation for modern, ultra-reliable software design and engineering.

Tom Hanks is one of the Nation's finest actors and filmmakers. He has been nominated for the Academy Award for Best Actor in a Leading Role five times, and received the award for his work in Philadelphia and Forrest Gump. Those roles and countless others, including in Apollo 13, Saving Private Ryan, and Cast Away, have left an indelible mark on American film. Off screen, as an advocate, Hanks has advocated for social and environmental justice, and for our veterans and their families.

Rear Admiral Grace Hopper, known as "Amazing Grace" and "the first lady of software," was at the forefront of computers and programming development from the 1940s through the 1980s. Hopper's work helped make coding languages more practical and accessible, and she created the first compiler, which translates source code from one language into another. She taught mathematics as an associate professor at Vassar College before joining the United States Naval Reserve as a lieutenant (junior grade) during World War II, where she became one of the first programmers of the Harvard Mark I computer and began her lifelong leadership role in the field of computer science.

Michael Jordan is one of the greatest athletes of all time. Jordan played 15 seasons in the NBA for the Chicago Bulls and Washington Wizards; he is currently a principal owner and chairman of the Charlotte Hornets. During his career, he won six championships, five Most Valuable Player awards, and appeared in 14 All-Star games.

Maya Lin is an artist and designer who is known for her work in sculpture and landscape art. She designed the Vietnam Veterans Memorial in Washington D.C. and since then has pursued a celebrated career in both art and architecture. A committed environmentalist, Lin is currently working on a multi-sited artwork/memorial, What is Missing? bringing awareness to the planet's loss of habitat and biodiversity.

Lorne Michaels is a producer and screenwriter, best known for creating and producing Saturday Night Live, which has run continuously for more than 40 years. In addition, Michaels has also produced The Tonight Show Starring Jimmy Fallon, Late Night with Seth Meyers, and 30 Rock, among other popular, award-winning shows. He has won 13 Emmy Awards over the course of his lengthy career.

Newt Minow is an attorney with a long and distinguished career in public life. After serving in the U.S. Army during World War II, Minow served as a Supreme Court clerk and counsel to the Governor of Illinois. In 1961, President Kennedy selected Minow, then 34, to serve as Chairman of the Federal Communications Committee (FCC), where he helped shape the future of American television and was a vigorous advocate for broadcasting that promoted the public interest. In the five decades since leaving the FCC, Minow has maintained a prominent private law practice while devoting himself to numerous public and charitable causes.

Eduardo Padrón is the President of Miami Dade College (MDC), one of the largest institutions of higher education in the United States. During his more than four decade career, President Padrón has been a national voice for access and inclusion. He has worked to ensure all students have access to high quality, affordable education. He has championed innovative teaching and learning strategies making MDC a national model of excellence.

Robert Redford is an actor, director, producer, businessman, and environmentalist. In 1981, he founded the Sundance Institute to advance the work of independent filmmakers and storytellers throughout the world, including through its annual Sundance Film Festival. He has received an Academy Award for Best Director and for Lifetime Achievement. Redford has directed or starred in numerous motion pictures, including The Candidate, All the President's Men, Quiz Show, and A River Runs Through It.

Diana Ross has had an iconic career spanning more than 50 years within the entertainment industry in music, film, television, theater, and fashion. Diana Ross is an Academy Award nominee, inductee into the Rock & Roll Hall of Fame, and recipient of the Grammy Awards highest honor, the Lifetime Achievement Award. Ross was a recipient of the 2007 Kennedy Center Honors. Diana Ross's greatest legacy is her five wonderful children.

Vin Scully is a broadcaster who, for 67 seasons, was the voice of the Brooklyn and Los Angeles Dodgers. In Southern California, where generations of fans have grown up listening to Dodger baseball, Scully's voice is known as the "soundtrack to summer." In 1988, he was inducted into the National Baseball Hall of Fame. Scully's signature voice brought to life key moments in baseball history, including perfect games by Sandy Koufax and Don Larsen, Kirk Gibson's home run in the 1988 World Series, and Hank Aaron's record-breaking 715th home run.

Bruce Springsteen is a singer, songwriter, and bandleader. More than five decades ago, he bought a guitar and learned how to make it talk. Since then, the stories he has told, in lyrics and epic live concert performances, have helped shape American music and have challenged us to realize the American dream. Springsteen is a Kennedy Center honoree and he and the E Street Band he leads have each been inducted into the Rock and Roll Hall of Fame.

Cicely Tyson has performed on the stage, on television, and on the silver screen. She has won two Emmy Awards and a Tony Award, and is known for her performances in Sounder, The Autobiography of Miss Jane Pittman, and The Help. In 2013, she returned to the stage with The Trip to the Bountiful, and was awarded the Tony Award for best leading actress. Tyson received the Kennedy Center Honors in 2015.