Accessibility links
Paris Climate Agreement: Big Businesses Urge Trump To Uphold Climate Deal : The Two-Way Starbucks, General Mills and Nike were among more than 360 companies and investors urging Trump and elected officials in an open letter to "continue U.S. participation" in the Paris climate accord. 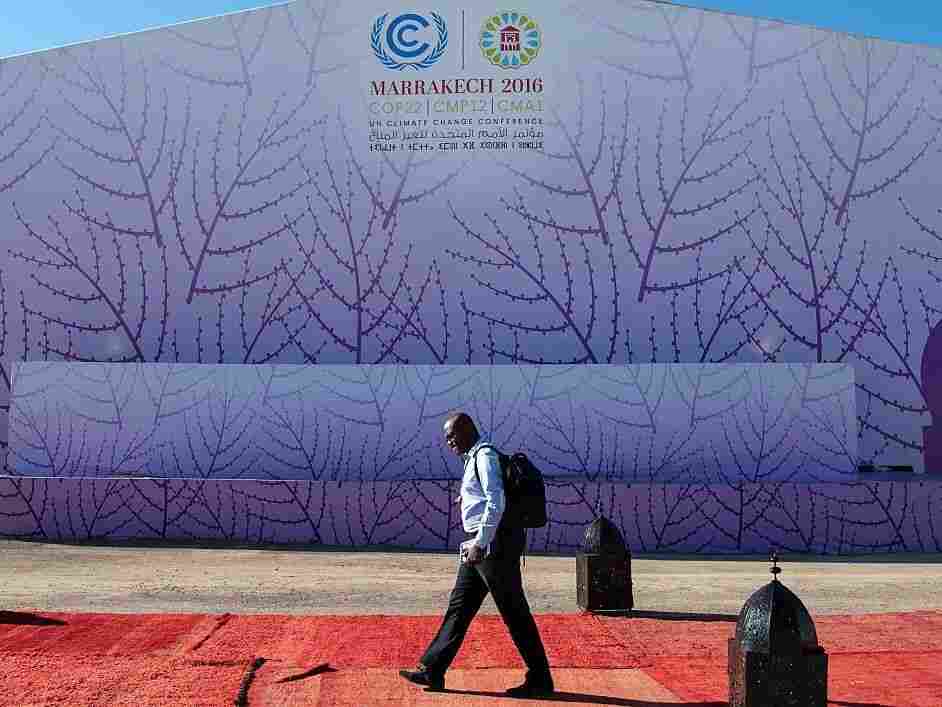 A man walks past the logo of the COP22 international climate conference on Nov. 9 in Marrakech, Morocco. Fadel Senna /AFP/Getty Images hide caption 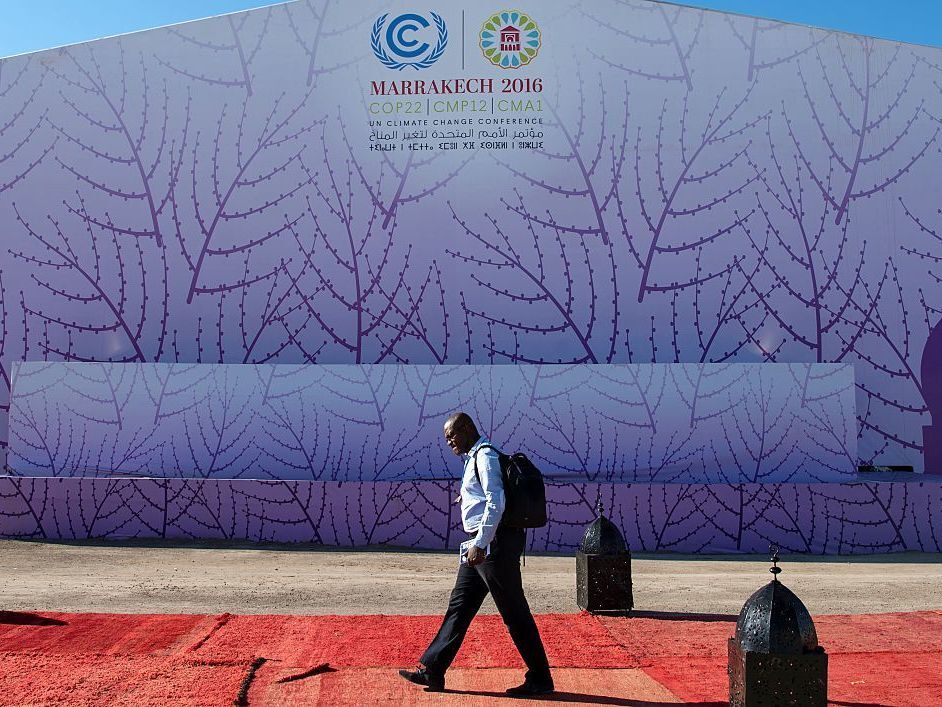 A man walks past the logo of the COP22 international climate conference on Nov. 9 in Marrakech, Morocco.

Hundreds of businesses such as Starbucks, General Mills and Hewlett Packard are asking President-elect Donald Trump to follow through on U.S. commitments to combat climate change. They argue it's good for business.

More than 360 companies and investors made their plea in an open letter to Trump, President Obama and members of Congress. They called on Trump to "continue U.S. participation in the Paris agreement," which he has threatened to scrap, and invest in the "low carbon economy at home and abroad."

The signatories also include DuPont, eBay, Nike, Unilever, Levi Strauss & Co. and Hilton. They issued the letter Wednesday during a major U.N. climate conference in Marrakech, Morocco, where representatives of nearly 200 countries were gathered to hash out the details of the Paris climate deal.

As members of the U.S. business and investor community, they emphasized their "deep commitment to addressing climate change" and pledged to do their part, "in our operations and beyond," to meet the goals of the agreement to reduce emissions of greenhouse gases.

"Failure to build a low-carbon economy puts American prosperity at risk. But the right action now will create jobs and boost US competitiveness," the letter states. "Implementing the Paris Agreement will enable and encourage businesses and investors to turn the billions of dollars in existing low-carbon investments into the trillions of dollars the world needs to bring clean energy and prosperity to all."

The U.S. commitments to the Paris accord are voluntary, as NPR's Christopher Joyce has reported. He added that experts are concerned that the U.S. could walk away from the deal and gut Obama's domestic climate change strategy. This could also discourage other countries from working to lower their own emissions.

"The new administration has created a huge amount of uncertainty, and that's bad for business," MIT management professor John Sterman told Marketplace. "So staying the course on the U.S. commitments to reduce emissions, to follow through on our Paris commitment is essential to lower that uncertainty, give businesses the confidence to develop and implement strategies that are going to build advantage, lower risk, and lower their costs."

Trump has previously labeled climate change a hoax. In 2012, he tweeted that it was a concept "created by and for the Chinese in order to make U.S. manufacturing non-competitive."

The concept of global warming was created by and for the Chinese in order to make U.S. manufacturing non-competitive.

As NPR has reported, Trump has appointed Myron Ebell to lead the Environmental Protection Agency transition team. Ebell "directs environmental and energy policy at the Competitive Enterprise Institute and is a leading climate change skeptic. He opposes the Clean Power Plan, which is aimed at reducing carbon emissions, calling it illegal. He heads a group called the 'Cooler Heads Coalition' that questions 'global warming alarmism.' "

The letter's overall message suggests that in the business community, environmental groups might have what would seem to be an unlikely ally.

"Environmental groups have been left with the daunting prospect that, with a climate skeptic in the White House, they will need to look directly to corporations to assume the mantle of leading the country's response to climate change," as The New York Times reported. "But without strict regulatory standards or oversight, companies will be left freer to pick and choose which climate-friendly policies to pursue, and which they will choose to ignore or abandon."