Accessibility links
How $85 Million Failed To Build A Swanky Hotel In Kabul : The Two-Way A new report finds $85 million in loans for a U.S.-supported hotel and apartment project in Afghanistan are gone, and that the buildings are unfinished and appear to be abandoned.

How $85 Million Failed To Build A Swanky Hotel In Kabul

How $85 Million Failed To Build A Swanky Hotel In Kabul 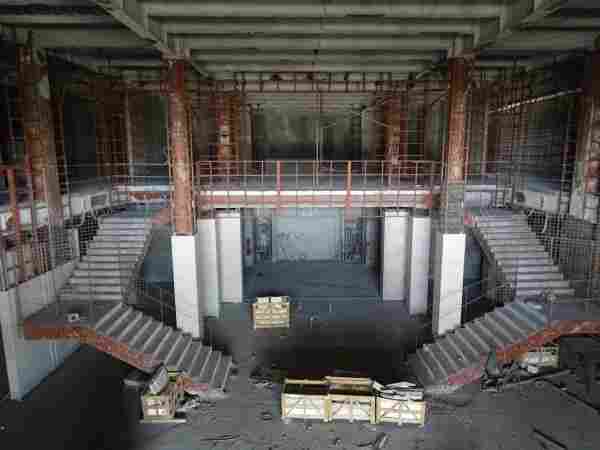 A view of the ground floor at the unfinished Kabul Grand Hotel in Kabul, Afghanistan, as seen on Aug. 1. Special Inspector General for Afghanistan Reconstruction hide caption 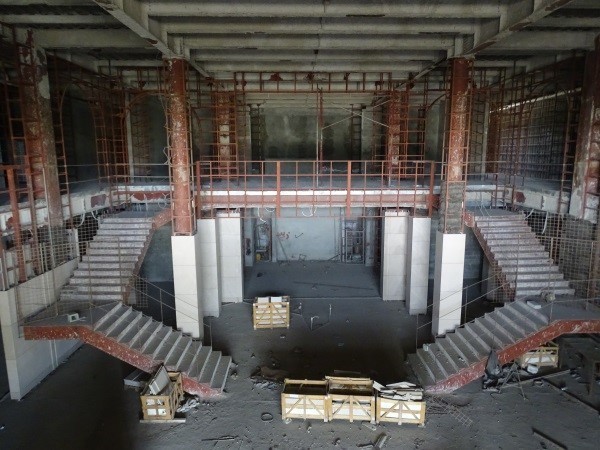 A view of the ground floor at the unfinished Kabul Grand Hotel in Kabul, Afghanistan, as seen on Aug. 1.

There was its prime location, right across from the U.S. Embassy in Afghanistan. There was its size, more than 200 rooms and a conference center and attached apartments.

Plus, hundreds of local jobs for Afghan people, the U.S. financing agency said in its 2007 press release announcing initial loans of $60 million for the project.

"The development of this marquee American hotel brand sends a very real message that Afghanistan is open for business," then-U.S. Ambassador Karl Eikenberry said at a 2009 event celebrating the project.

"This investment represents a very real commitment to job creation and sustainable development," Eikenberry continued. "More than 100 Afghans are already employed as part of this construction project, and that number will increase significantly when the full hospitality demands of running a world-class hotel begin next year."

But nearly $85 million later, both the hotel and an adjacent apartment building known as the Kabul Grand Residences are apparently abandoned. Their rooms are unfinished, and no hotel workers are in sight.

A report by the Office of the Special Inspector General for Afghanistan Reconstruction, a military agency set up by Congress to audit U.S. spending in the country, describes how the project went so wrong. The agency's preliminary investigation found "troubling management practices and lax oversight" by the U.S. financing agency, the Overseas Private Investment Corp.

OPIC is an agency run by the U.S. government that uses private money to finance development projects overseas.

According to the report, which is based on two inspections this year, the agency placed too much trust in progress reports by the companies managing the construction:

"OPIC did not regularly visit the sites or have an on-site monitoring presence at either construction project, but instead relied almost exclusively on representations made by the loan recipients regarding the status of the projects. As a result, the $85 million in loans is gone, the buildings were never completed and are uninhabitable, and the U.S. Embassy is now forced to provide security for the site at additional cost to U.S. taxpayers."

The report said the cost of securing the unfinished buildings adjacent to the embassy had not been disclosed. According to the findings, Marriott withdrew its support for the project in 2013. The company did not respond to a request for comment. 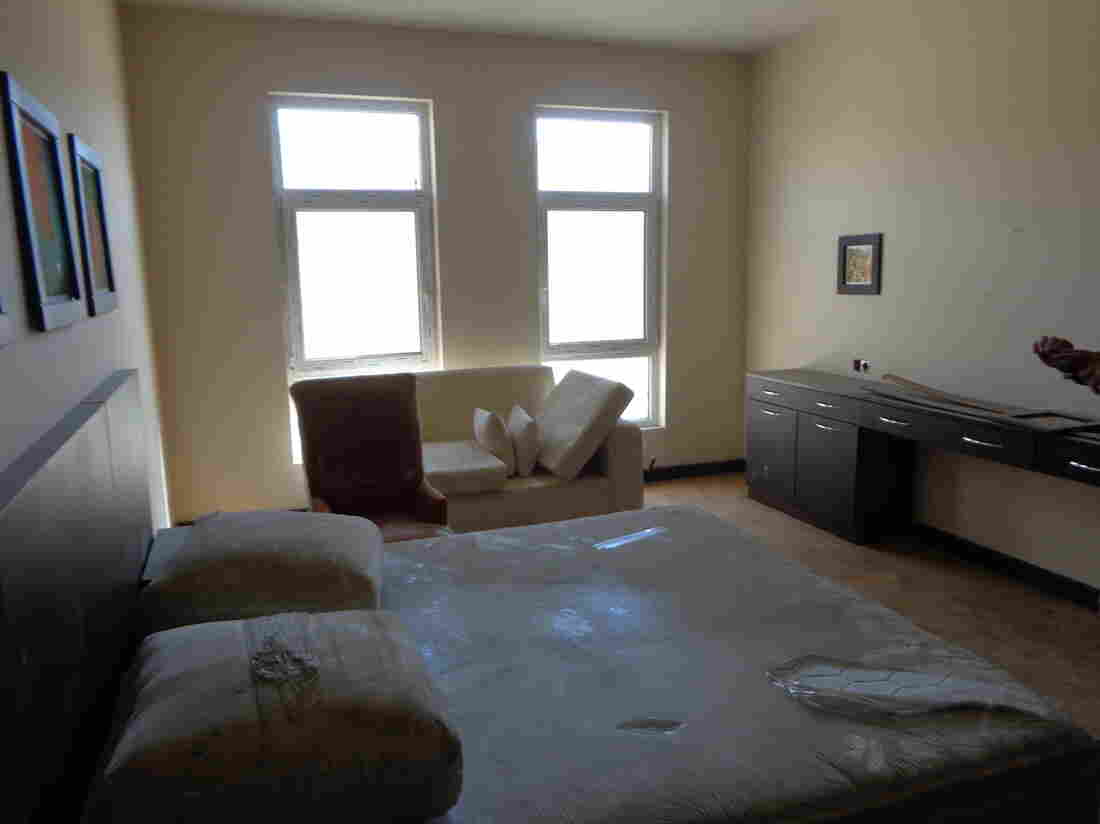 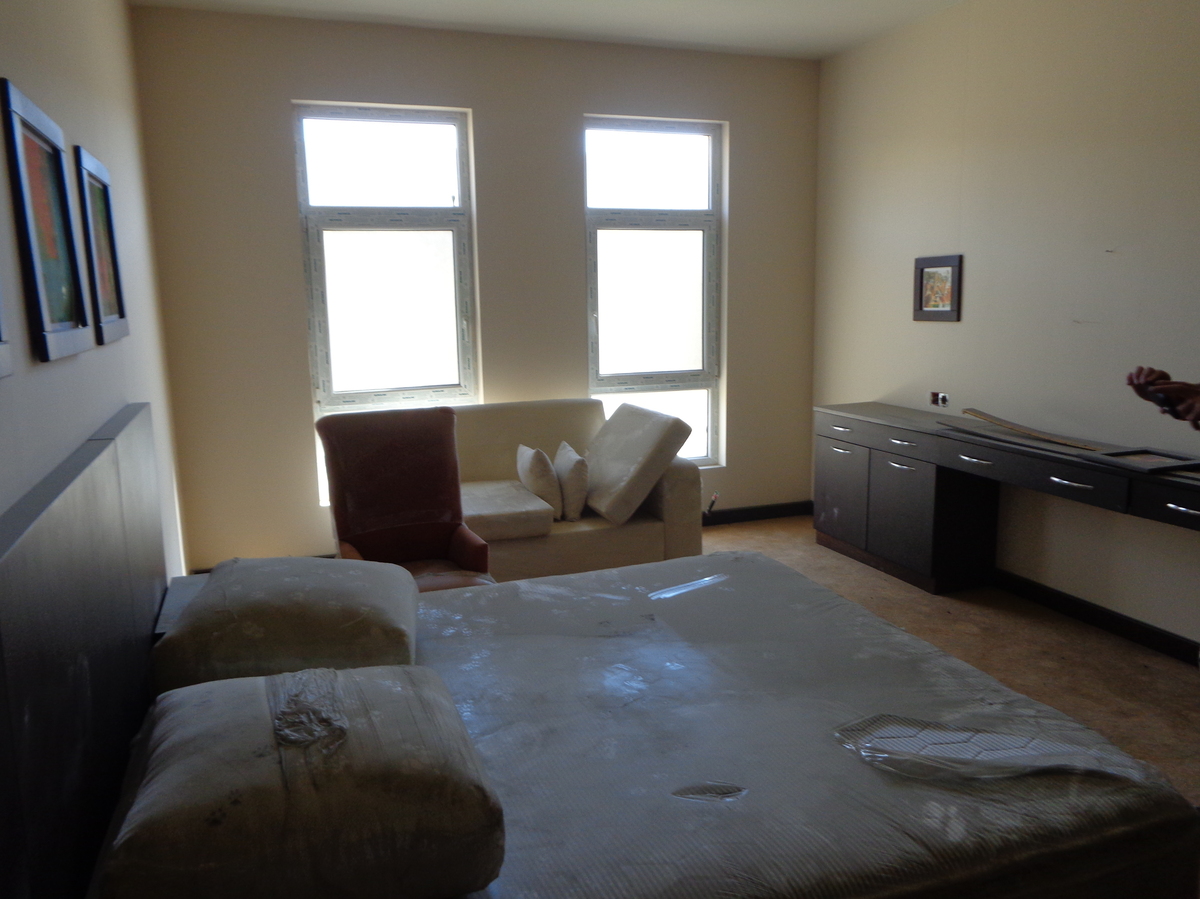 An abandoned bedroom in the Kabul Grand Residences apartment building, one of two spaces apparently outfitted as model rooms.

This is not the first American-funded construction debacle since the U.S. invaded Afghanistan in 2001. As we have reported, the U.S. has paid tens of millions of dollars for overdue warehouses, a poorly built hospital and what is likely the world's most expensive gas station.

As for what comes next for the empty hotel and apartment buildings, the inspector general suggests the U.S. government "take action to recoup the loan funds," rather than attempting to force the construction companies to complete the projects.

"We believe the issues raised by these loans have broader implications which deserve your immediate attention," states the report, which is addressed to the CEO of OPIC, Elizabeth Littlefield.

In a response letter, Littlefield wrote, "OPIC is actively engaged with various parties regarding the most effective way to address the outstanding loan."

The loans went primarily to a development company called Tayl Investors Group, which is incorporated in the British Virgin Islands and run by a Jordanian citizen named Fathi Taher. Taher and his U.S. sponsors submitted the plans for both the hotel and apartments, and his company was the project manager for both buildings.

As the projects got underway, OPIC relied on the Tayl group for updates on the hotel. For the apartment building, the agency hired a Bulgarian company, Gardiner & Theobald, to monitor progress.

"Ironically," the report states, "Gardiner & Theobald never visited the apartment project site, and instead relied on information provided by the loan recipients to complete the status reports it provided to OPIC."