Accessibility links
Trump Selects Sessions As Attorney General, Pompeo As CIA Chief, Flynn As National Security Adviser : The Two-Way Sen. Jeff Sessions has been offered the post of attorney general, while Rep. Mike Pompeo and Michael Flynn have been offered the respective positions of CIA chief and national security adviser. 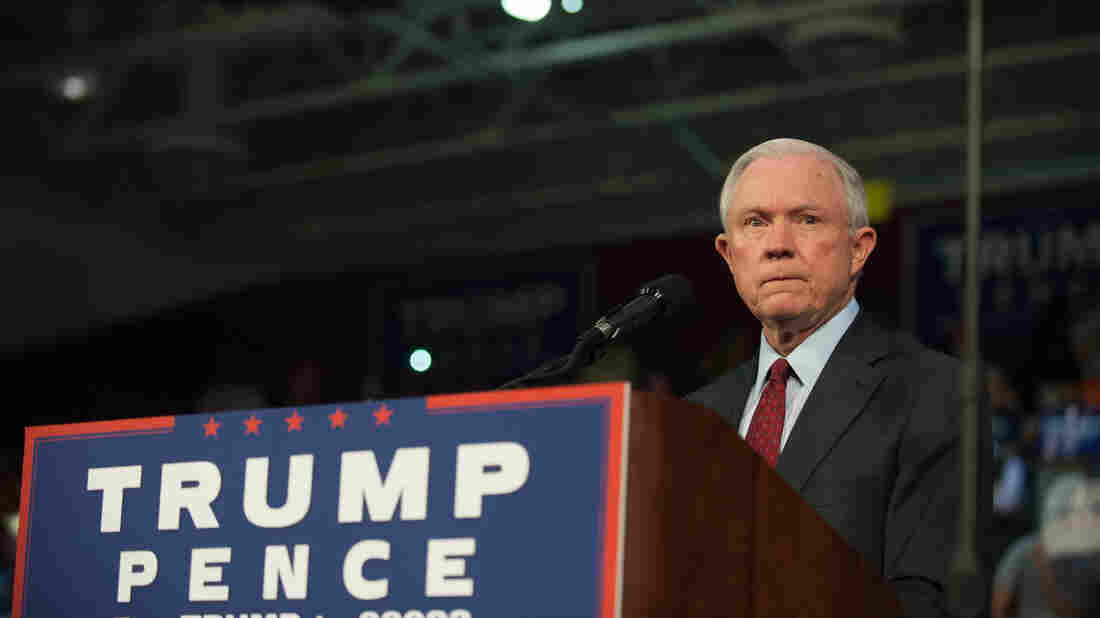 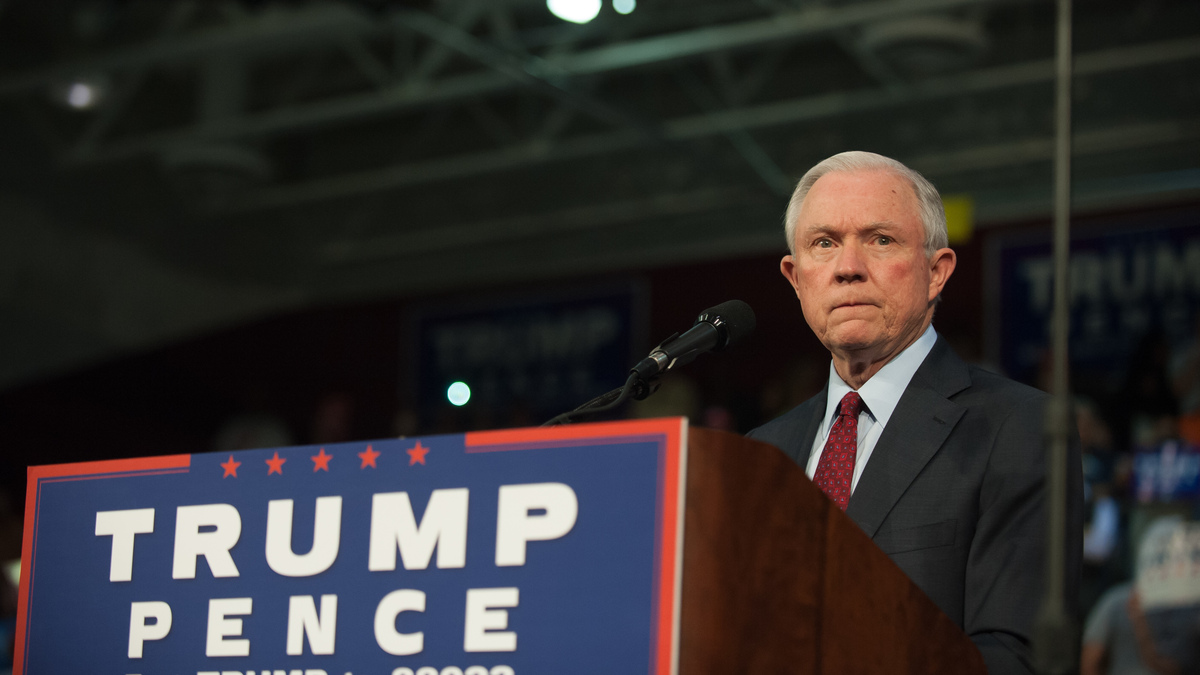 Alabama Sen. Jeff Sessions pledges his support for then-Republican presidential candidate Donald Trump before speaking to supporters on Oct. 10 at a rally in Ambridge, Pa.

Trump's selections signal that he is prioritizing loyalty as he chooses nominees for top posts — turning to people who were early and outspoken supporters of his campaign.

Sessions is a former U.S. attorney and current senator with lengthy experience with the Justice Department, but whose nomination for a federal judgeship was tanked by reports of racist comments. Flynn, a former lieutenant general, was pushed out of his role as head of the Defense Intelligence Agency in 2014 after clashing with top staffers. Pompeo is a representative who served both on the House Intelligence Committee and on the Benghazi committee.

The attorney general and CIA director nominees will need to be confirmed by the Senate. The national security adviser does not need Senate confirmation.

The 69-year-old Republican senator, who has been offered the position of attorney general, was one of the first lawmakers to ally himself with the Trump campaign. He embraces a forceful anti-immigration platform and a tough approach to fighting crime.

Sessions "is a world-class legal mind and considered a truly great Attorney General and U.S. Attorney in the state of Alabama," Trump said in a statement from his transition team.

"I am humbled to have been asked by President-elect Trump to serve as Attorney General of the United States," Sessions said. "My previous 15 years working in the Department of Justice were extraordinarily fulfilling. I love the Department, its people and its mission. I can think of no greater honor than to lead them."

Sessions is a former longtime U.S. attorney in Alabama who went on to serve as the top Republican member of the Senate Judiciary Committee, which oversees Justice Department and FBI operations.

But earlier in his career, that same committee denied him a position as a lifetime-tenured federal judge after lawyers testified he had used racially insensitive language. Sessions apologized for saying he thought the KKK was OK "until I found out they smoked pot," describing the episode as a joke.

His positions on social issues including same-sex marriage, marijuana legalization and funding for stem-cell research are conservative.

As NPR's Ailsa Chang reported earlier this year, Sessions had a controversial career as a prosecutor and allegations of racism have followed him for decades. He first rose to national attention when he prosecuted three black civil rights workers for voter fraud; a defense lawyer called it "voter persecution," and the jury returned no convictions.

The president of the NAACP called Sessions' appointment "troubling," while a legislative counsel at the ACLU called him "the senator with probably the most anti-immigrant, anti-refugee, anti-child record in the Senate."

Former Alabama Rep. Jo Bonner, a Republican from Sessions' hometown of Mobile, said President-elect Trump "has supreme confidence in Sen. Sessions' judgment, his wisdom, his character and his loyalty."

California Sen. Dianne Feinstein, the top Democrat on the committee that will review Sessions' nomination, said in a statement:

"Senator Sessions has served on the Senate Judiciary Committee for many years so he's well aware of the thorough vetting he's about to receive. And while many of us have worked with Senator Sessions closely and know him to be a staunch advocate for his beliefs, the process will remain the same: a fair and complete review of the nominee. While Senator Sessions and I differ on a great many issues, I am committed to a full and fair process."

The current attorney general is Loretta Lynch, the first black woman in that position (as a child, she attended civil rights rallies in the South with her parents) and the former U.S. attorney for the eastern district of New York. 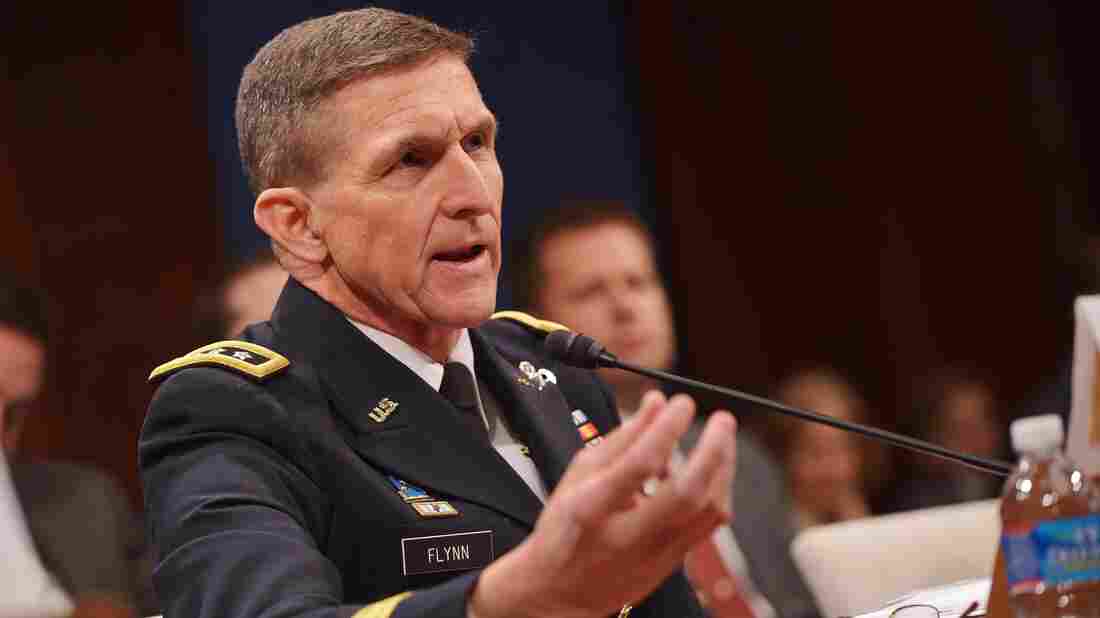 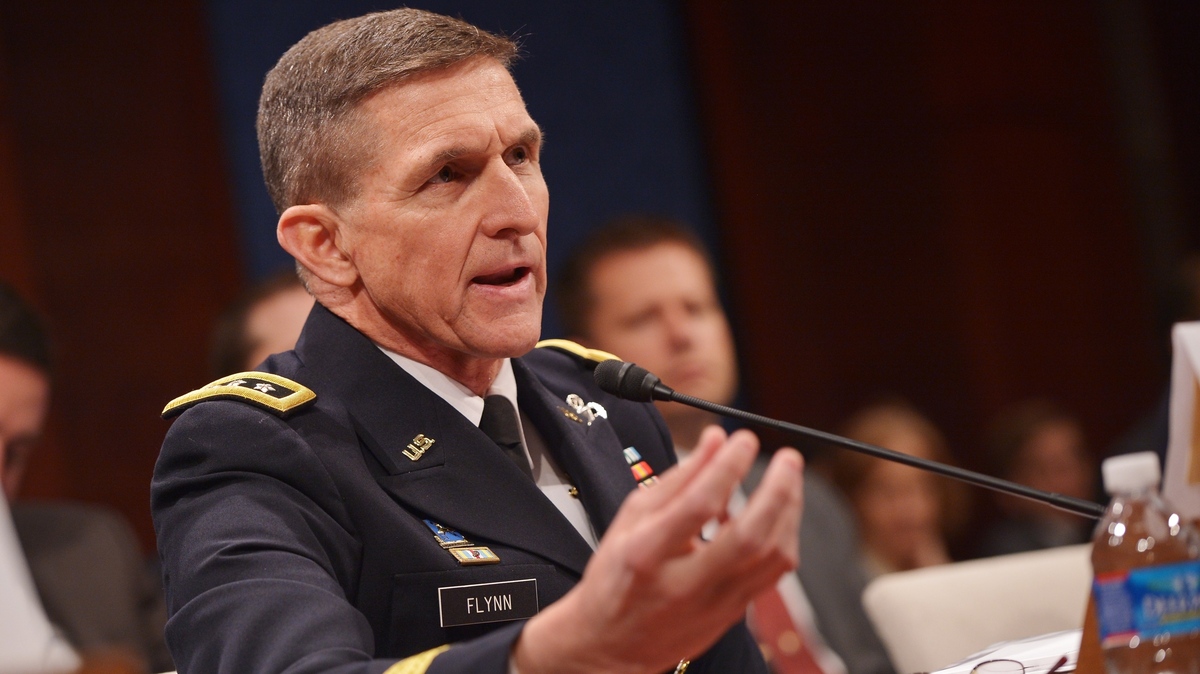 Then-Defense Intelligence Agency Director Lt. Gen. Michael Flynn testifies before the House Select Intelligence Committee in February 2014. He was forced out of that role later that year.

The brazen retired Army lieutenant general, who was also an early supporter of Trump, has been offered the position of national security adviser.

"General Flynn is one of the country's foremost experts on military and intelligence matters and he will be an invaluable asset to me and my administration," Trump said in the transition team statement.

Flynn said he was "deeply humbled and honored to accept the position as National Security Advisor to serve both our country and our nation's next President, Donald J. Trump."

Flynn has a track record of sharp elbows inside the U.S. intelligence community, as NPR's Tom Bowman wrote Friday. He was fired as head of the Defense Intelligence Agency, the Pentagon's military-focused spy service, after pushing to send more operatives overseas and clashing with top staffers and his ultimate bosses in the White House:

"Within military circles, Flynn was a highly respected — though at times controversial — career intelligence officer. He worked his way up the ranks, including stints as the top intelligence officer for the Joint Chiefs of Staff, and as Gen. Stanley McChrystal's top aide in Afghanistan. ...

"Flynn, by then a three-star general, went on to run the Defense Intelligence Agency, the Pentagon's military-centered spy service. But the workforce there complained he was trying to push through too many changes, including sending more employees overseas.

"Flynn argued that he was trying to get the bureaucracy to be more efficient, to do more. Critics said he couldn't run a large bureaucracy. He was forced out in 2014 after less than two years in the job."

Flynn's return to government in a top administration post could enable him to settle any outstanding scores within the intelligence world, depending on the support he receives from the president and the way Trump structures decision-making inside his national security apparatus.

During the Republican National Convention this summer, he joined in the chants of "Lock her up," in reference to Hillary Clinton. "It was a strange position for someone who was a career military officer and a registered Democrat from Rhode Island," Tom says.

Flynn, who recently wrote a book called The Field of Fight: How We Can Win the Global War Against Radical Islam and Its Allies, has called President Obama "a liar" and has troubled some former colleagues with his partisan political work, Tom reports.

The current national security adviser is Susan Rice, the former U.N. ambassador who was sharply criticized by congressional Republicans for making what she later acknowledged were "incorrect" statements after the Benghazi attack.

Trump's national security picks, including the choice of Flynn, illustrate the choices his administration will face as it translate the promises and rhetoric of the campaign into governance.

For example, Flynn told NPR in August that he thought it would be impractical to impose a blanket ban on travel by Muslims from around the world to the United States. A full stop on such arrivals — which Trump later revised to a call for "extreme vetting" for those entering the U.S. — was one of Trump's signature campaign promises. As president and national security adviser, however, Trump and Flynn must decide how much of either idea they take into the new administration and try to make into reality.

Another critical issue is the U.S. relationship with Russia. Candidate Trump repeated that he wanted better ties with Russia and its president, Vladimir Putin, and for the two countries to work together in Syria to fight the Islamic State. (President Obama pursued such a deal but could not conclude one with Moscow.) Flynn's situation is even more nuanced. He's called Russia "an enemy" of the U.S. in his public comments and suggested in a book this year that it's part of a global axis arrayed against the United States. But Flynn also traveled to Moscow last year as a guest of Putin for a banquet celebrating the Russian state news agency RT, part of the Kremlin's propaganda operation targeting the West.

RT quoted a description of Flynn as a 'Russia-loving' appointment in its headline on Friday. 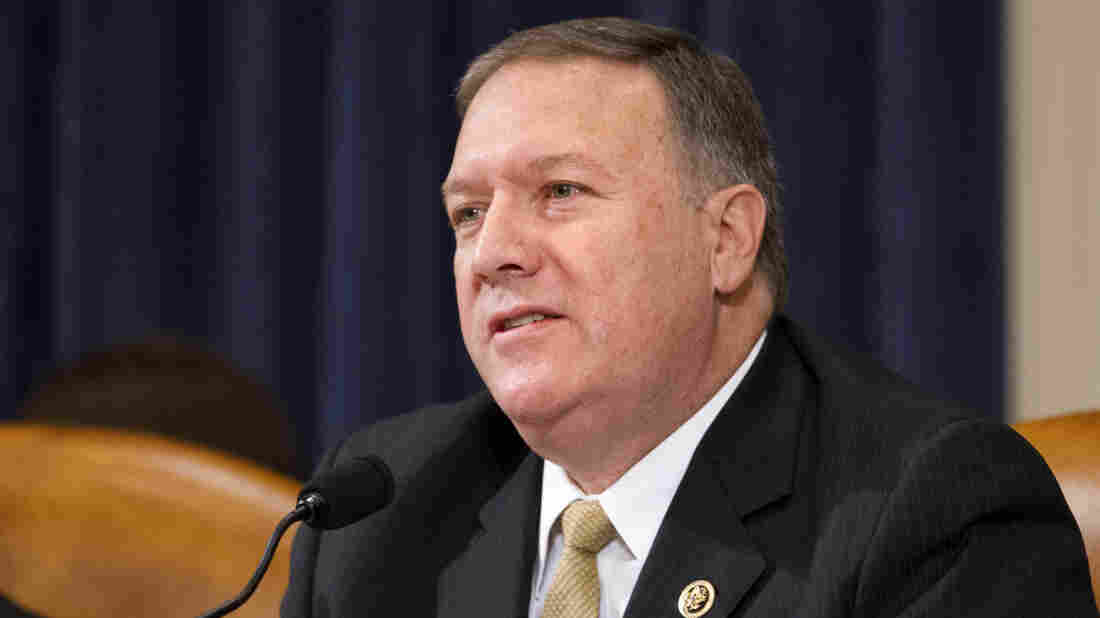 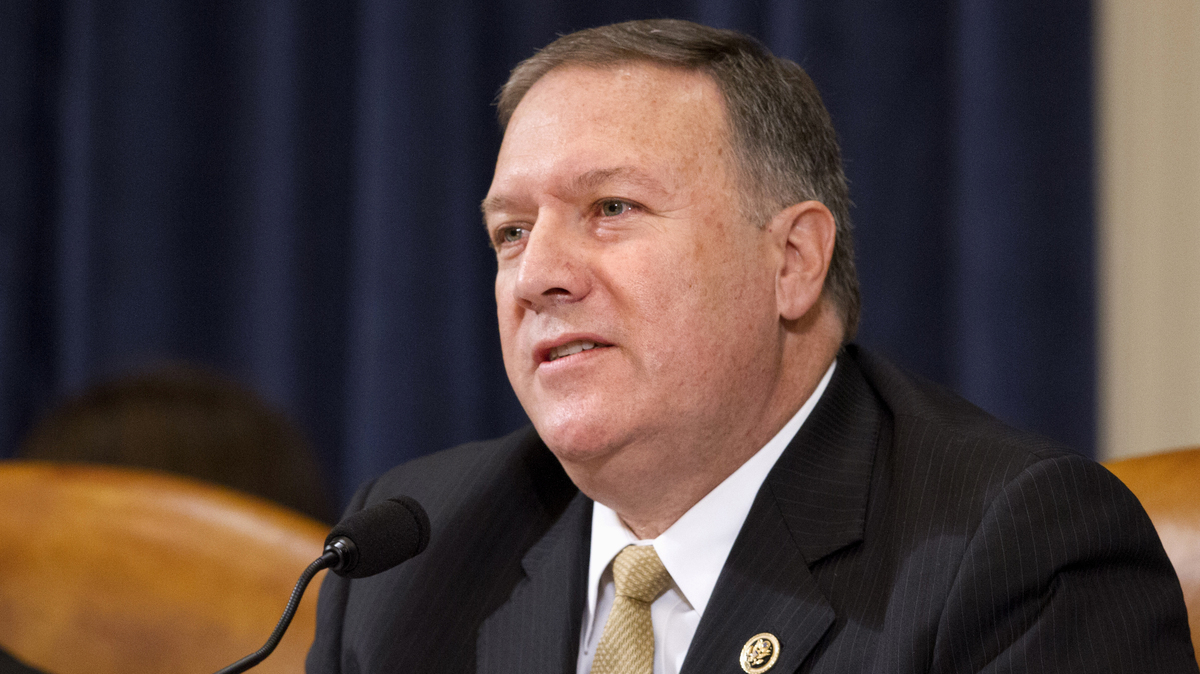 Pompeo, a third-term Republican congressman from Kansas, has been offered the post of CIA director.

"I am honored to have been given this opportunity to serve and to work alongside President-elect Donald J. Trump to keep America safe. I also look forward to working with America's intelligence warriors, who do so much to protect Americans each and every day," Pompeo said.

According to his congressional biography, he graduated from West Point and served as a cavalry officer. He attended Harvard Law School, where he was an editor of the Harvard Law Review, before entering business as an executive in aerospace manufacturing and the oil industry.

He served on the Energy and Commerce committee as well as the House Intelligence Committee, and was a member of the House Select Committee on Benghazi.

The current CIA director is John Brennan, who joined the CIA in 1980 and was a station chief in Saudi Arabia and the chief of the national counterterrorism center.

Like Flynn, Pompeo — if confirmed as CIA director — would face decisions about how much of Trump's campaign rhetoric to attempt to implement as policy.

Pompeo has been as critical as Trump of the Iran nuclear deal, for example — would the two work together to dismantle it, or focus on other ways to try to punish Tehran?