Accessibility links
Tenn. School Bus Crash Claims Another Victim As A 6th Child Dies : The Two-Way The driver, Johnthony Walker, 24, was charged on Monday with five counts of vehicular homicide. Chattanooga police say he will now be charged with a sixth, after a hospitalized child died. 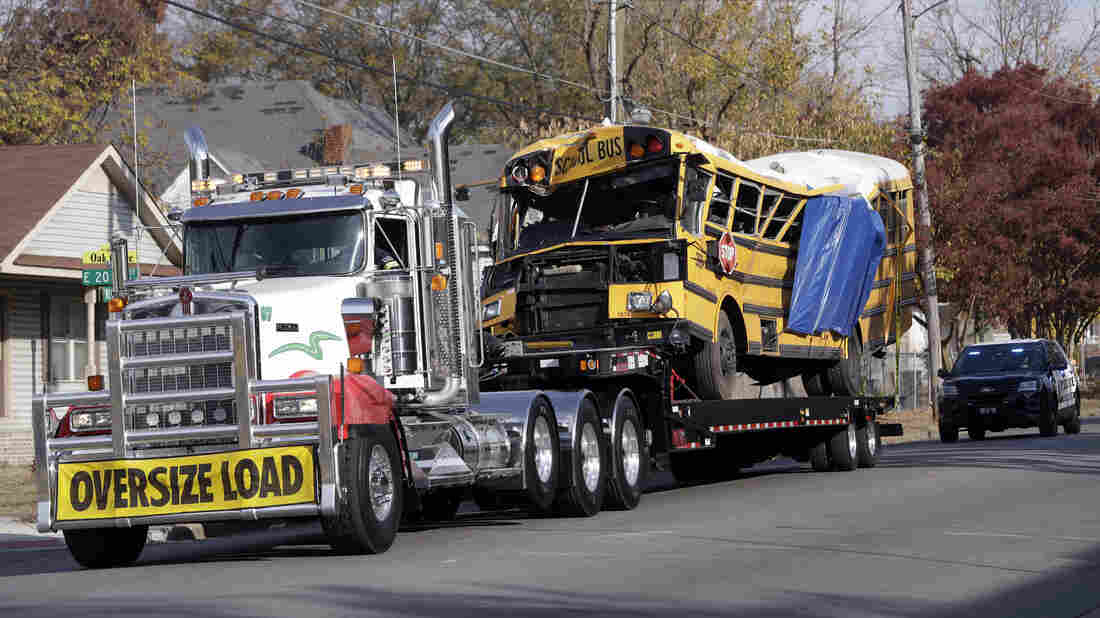 A school bus is carried away on Tuesday in Chattanooga, Tenn., from the site where it crashed on Monday. The bus driver, Johnthony Walker, 24, has been arrested on charges including vehicular homicide, reckless driving and reckless endangerment. The crash killed six elementary school students. Mark Humphrey/AP hide caption 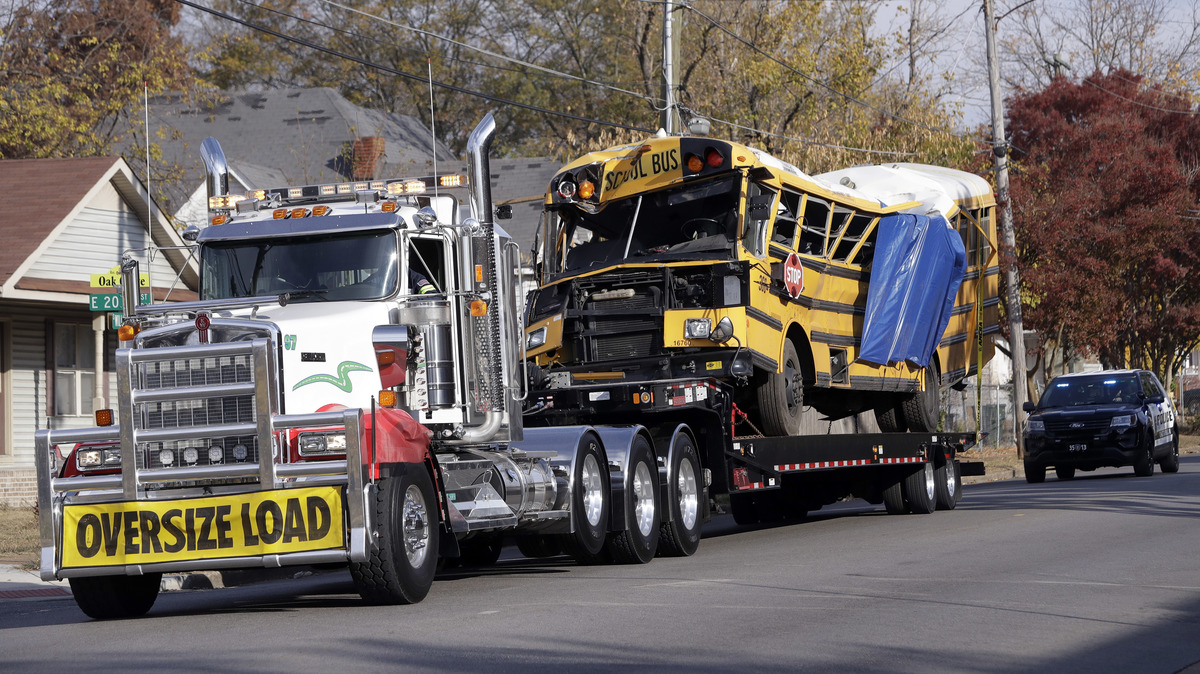 A school bus is carried away on Tuesday in Chattanooga, Tenn., from the site where it crashed on Monday. The bus driver, Johnthony Walker, 24, has been arrested on charges including vehicular homicide, reckless driving and reckless endangerment. The crash killed six elementary school students.

Police say Walker was not driving his designated route when the bus left the road and crashed into a tree on Monday.

Walker had been charged with five counts of vehicular homicide, and authorities say he now will be charged with a sixth.

At the time of the crash, 37 children were on the bus on their way home from Woodmore Elementary School.

"The bus crashed on Talley Road, a narrow winding road in a Chattanooga residential area. The driver may have been speeding. The bus had cameras, but they're so damaged, the NTSB can't download footage yet. Chattanooga police are conducting a separate, criminal investigation."

National Transportation Safety Board Chairman Christopher Hart told a news conference that Walker had no criminal record in the state.

Chattanooga Police Sgt. Austin Garrett says investigators have not yet spoken to any of the surviving children.

"Police disputed one woman's claim that the driver asked the children if they were 'prepared to die' just before the wreck. Jasmine Mateen, whose 6-year-old daughter was among the dead, said one of her two surviving children who were on the bus told her about the driver's remarks.

"Garrett, however, said at a Wednesday press conference: 'I want to be very clear on this. No witness we have spoken with has that information or provided it directly to our investigators.' "

The bus company has not responded to questions about Walker's safety or employment record, but the head of the company did release a condolence video on YouTube.

"The chief executive of Durham School Services, the busing contractor for the school district in Hamilton County, Tenn., offered an emotional apology for the crash, which has prompted rigorous scrutiny of a company that transports more than a million schoolchildren in the United States each day.

" 'I can't fathom the anguish of the parents whose children were involved in this horrific accident and that involved one of my company's buses,' the executive, David A. Duke, said in a video that Durham published on YouTube. 'Nothing that I can say can take away the pain and the grief for these families. What I can say is I'm deeply sorry for the children that were taken from their families with so much life before them.' "

A makeshift memorial to the victims has grown with people adding more stuffed animals, flowers and balloons to the collection.

School officials repeatedly declined to answer questions Wednesday about whether they received complaints about the driver.

"School Principal Brenda Adamson-Cothran said their focus is on 'giving our families and students the support that they need in this tragedy.' "

"Walker was involved in another bus accident only two months ago, police said. In September, he was driving the bus into a blind curve when he crossed over the center line and hit an SUV, according to a police report. No one was injured, and the damage to both vehicles was minor. He was not cited for any violations."