Accessibility links
Uber Drivers, Other Workers Protest For $15 Minimum Wage : The Two-Way Employees at two airports and at McDonald's restaurants across the country were striking or protesting, while other workers — including home care and health workers — were joining demonstrations. 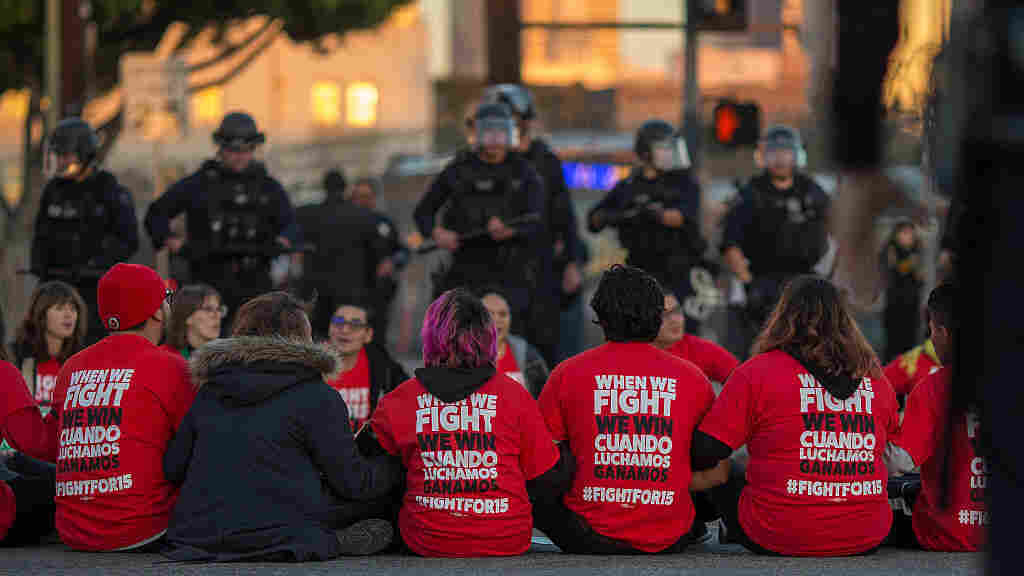 Police surround McDonald's restaurant employees who were sitting in an intersection in Los Angeles after walking off the job to demand a $15 minimum wage and union rights during nationwide "Fight for $15" protests on Tuesday. David McNew/Getty Images hide caption 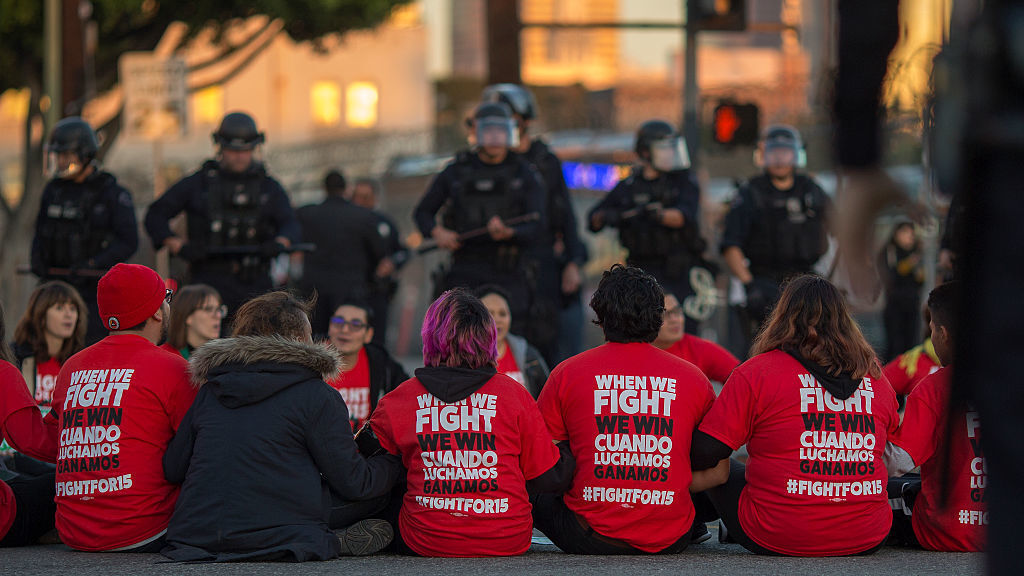 Police surround McDonald's restaurant employees who were sitting in an intersection in Los Angeles after walking off the job to demand a $15 minimum wage and union rights during nationwide "Fight for $15" protests on Tuesday.

Uber drivers, fast food workers, health aides and airport employees are striking or demonstrating in several cities across America on Tuesday, in what organizers are describing as a "day of disruption" calling for a higher minimum wage.

For years, several groups have held protests in support of a $15 minimum wage. But the "Fight for $15" organizers planning Tuesday's event say this is the first time Uber drivers are joining in the demonstrations.

Dozens of people have been arrested across the country in connection to the protests. In New York, about two dozen chanting protesters were detained after linking arms and sitting on a street in Manhattan, The Associated Press reports. About 350 people total were at that protest, according to the news service.

"Detroit police say they arrested about 40 protesters who blocked traffic," the AP writes. "And nearly three dozen protesters have been arrested in Cambridge, Massachusetts. In the San Francisco Bay Area, ride-hailing drivers, fast-food employees, airport workers and others shut down an Oakland intersection."

In Minnesota, a group of activists, including home care workers and fast food workers, were arrested after sitting in the road.

Among them was Sumer Spika, a home care worker and vice president of a Minnesota health care union. She says two of her home care clients were also at the protest in support of the cause and were arrested, too.

"They see that their home care workers are struggling to provide for their families, they're having to work hours unpaid because there's just not enough money in our state's budget to pay for overtime," Spika told NPR. "People aren't getting the care that they need."

Other demonstrations, including some strikes, are planned at O'Hare International Airport in Chicago and at Boston's Logan Airport, and fast food workers in more than 300 cities plan to walk off their jobs, protest organizers say.

Hospital workers, home care and health aides, and university employees are also participating in the demonstrations, according to the "Fight for $15" group.

McDonald's has been highlighted in many of the protests, with fast-food workers and others gathering in front of restaurants in the fast food chain.

The company responded to the protests with a statement, saying McDonald's helps employees develop "the valuable skills and work ethic" necessary for successful careers, in or outside the restaurant.

"Every year, we and our franchisees separately employ hundreds of thousands of people, providing many with their very first job," Lisa McComb, a McDonald's spokeswoman, said in the statement. "Last July, we raised wages for all employees at our company-owned restaurants to $1 above the local minimum wage and gave them the ability to earn paid time off."

And then there are the Uber drivers, joining in to push for a higher minimum wage in general, and for greater protections for Uber drivers in particular.

The battle over how Uber drivers are classified — as contractors versus employees — has been waged in localities across the country. And it's not just an issue in the U.S. Last month, a court in the U.K. ruled that at least some Uber drivers are employees who need to be guaranteed the minimum wage and get paid breaks.

But it will be difficult to evaluate how many Uber drivers are taking action on Tuesday. While organizers say some will be carrying signs or swapping out their Uber decals for protest images, others are protesting silently.

Terry Williams, who drives part time for Uber in Pennsylvania, tells NPR he's not driving today. Williams says he has a full-time job at Wakefern Food Corp., in addition to his work with Uber. "Both of them together still aren't enough to make ends meet," he says, especially as he helps support his children and grandchildren.

He supports the overall call for a higher minimum wage, but beyond the dollar figure, he's concerned about benefits and protections for hourly workers.

And with Uber specifically, Williams says there are no safeguards. He says he's done trips for Uber that cost him more in gas than he made in the fare, and there's nothing to protect him from that.

So he's protesting. "My car is parked, and it will stay there until tomorrow," he says.

"I'm sure Uber can tell" if fewer drivers than usual are logged into the app, Williams says. But for everyone else, he acknowledges, "there's no way of knowing."