Accessibility links
Gatlinburg Wildfires: 'There Were Rivers Of Fire,' Resident Says : The Two-Way Eight new blazes raged Wednesday near Gatlinburg, Tenn., where fire has already destroyed more than 150 structures and injured dozens of people. "There were rivers of fire," said a resident who fled. 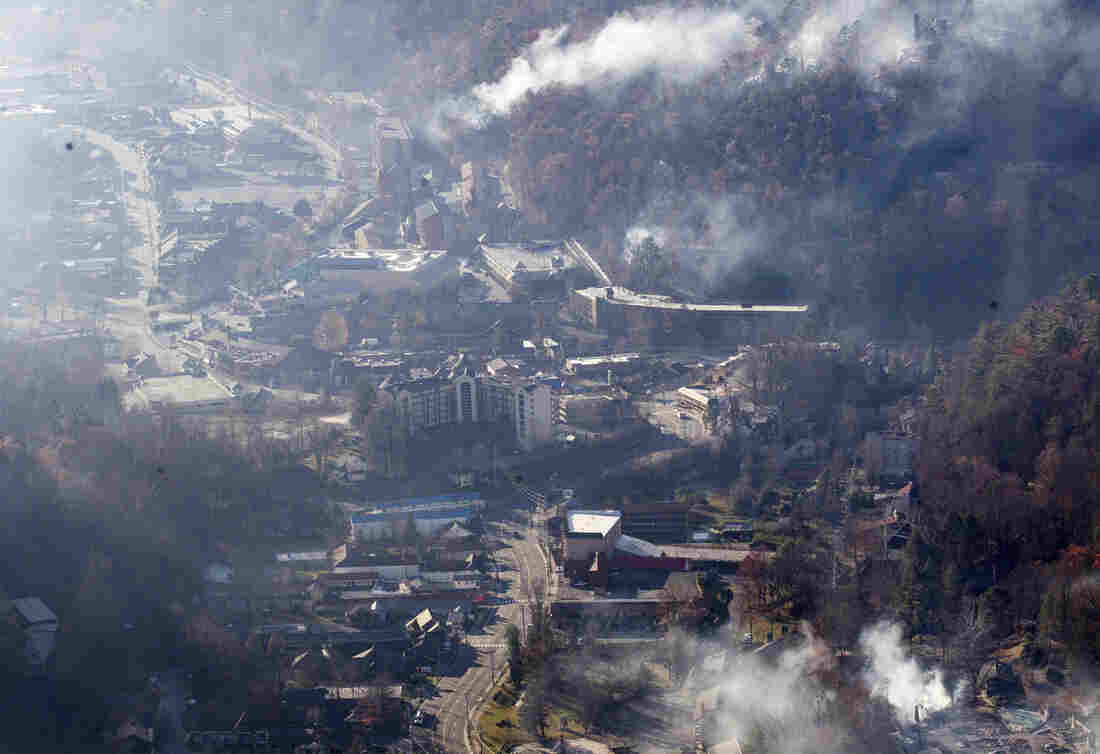 The area near Gatlinburg, Tenn., as seen from a National Guard helicopter on Tuesday. Erik Schelzig/AP hide caption 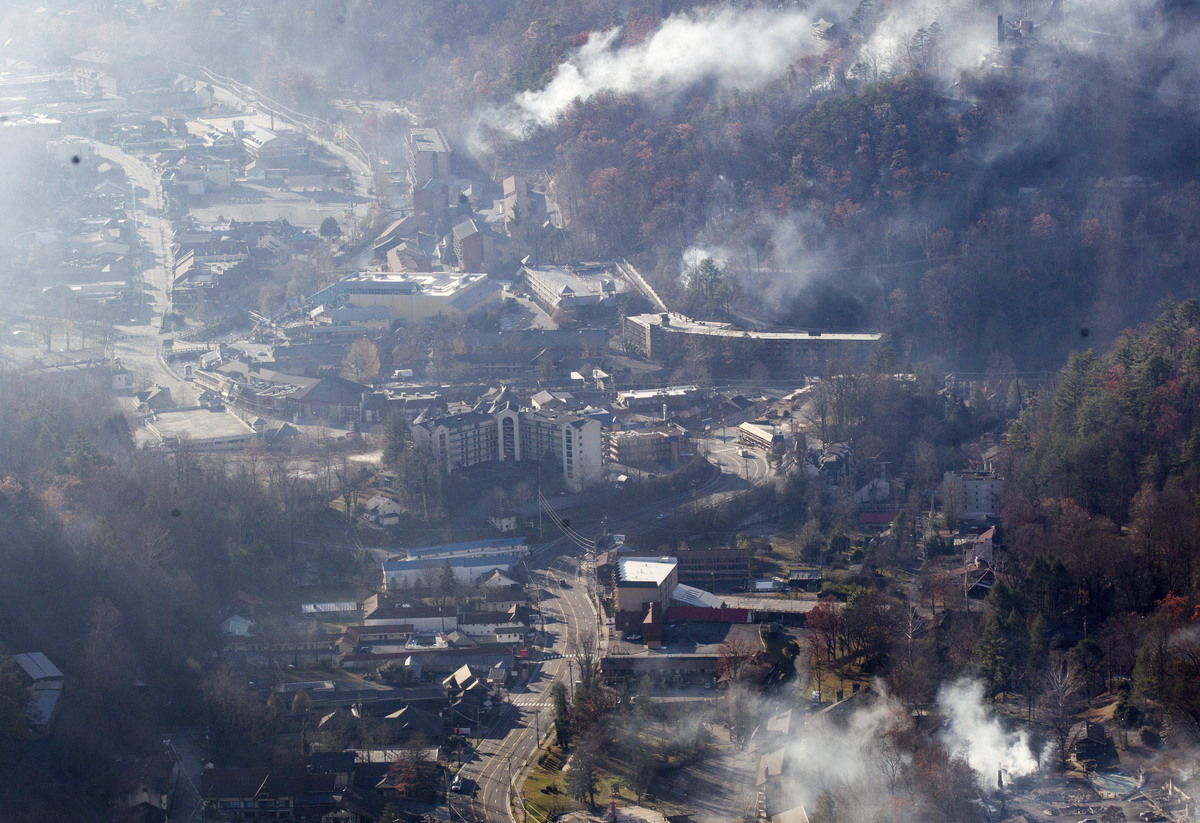 The area near Gatlinburg, Tenn., as seen from a National Guard helicopter on Tuesday.

In eastern Tennessee, deadly wildfires are still burning and authorities say it's still too dangerous for thousands of people to return to their damaged and destroyed homes and businesses.

On Wednesday, authorities in Gatlinburg, Tenn., said the confirmed death toll had grown to seven people, reported The Associated Press. Search and rescue crews from local law enforcement agencies and the National Guard combed through the remains of buildings looking for survivors.

Dozens of people were injured in and around the tourist town at the foot of Great Smoky Mountains National Park, where forested neighborhoods turned into hellscapes in a matter of hours Monday night.

"There were rivers of fire," Gatlinburg resident Ric Morgan told the Knoxville News Sentinel. He said he escaped after a neighbor saw him waving a flashlight in his window as flames raced down toward his apartment.

Cindy Davenport arrived in town Tuesday to help her elderly father, who was evacuated from his home. She told the newspaper, "He said he could see the fire, and he's blind."

In all, about 14,000 people were evacuated from Gatlinburg and about 500 from nearby Pigeon Forge, according to Tennessee's emergency management agency. 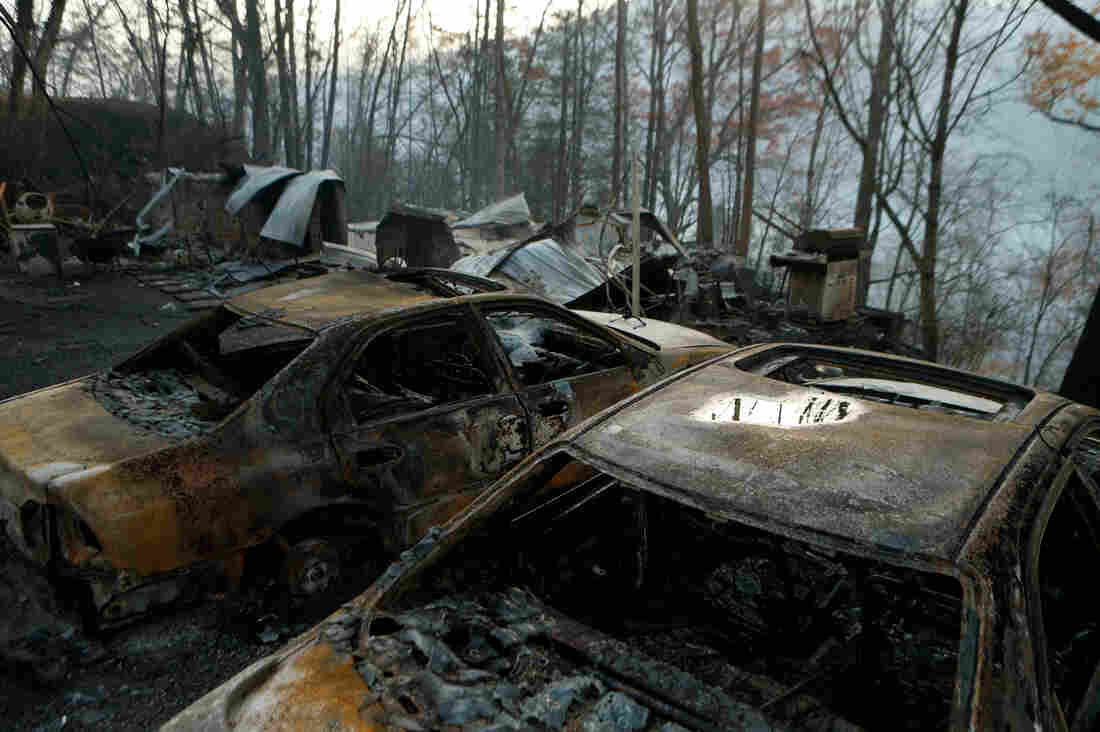 The remains of cars in Gatlinburg. Fire has destroyed more than 150 homes and businesses in Sevier County. Brian Blanco/Getty Images hide caption 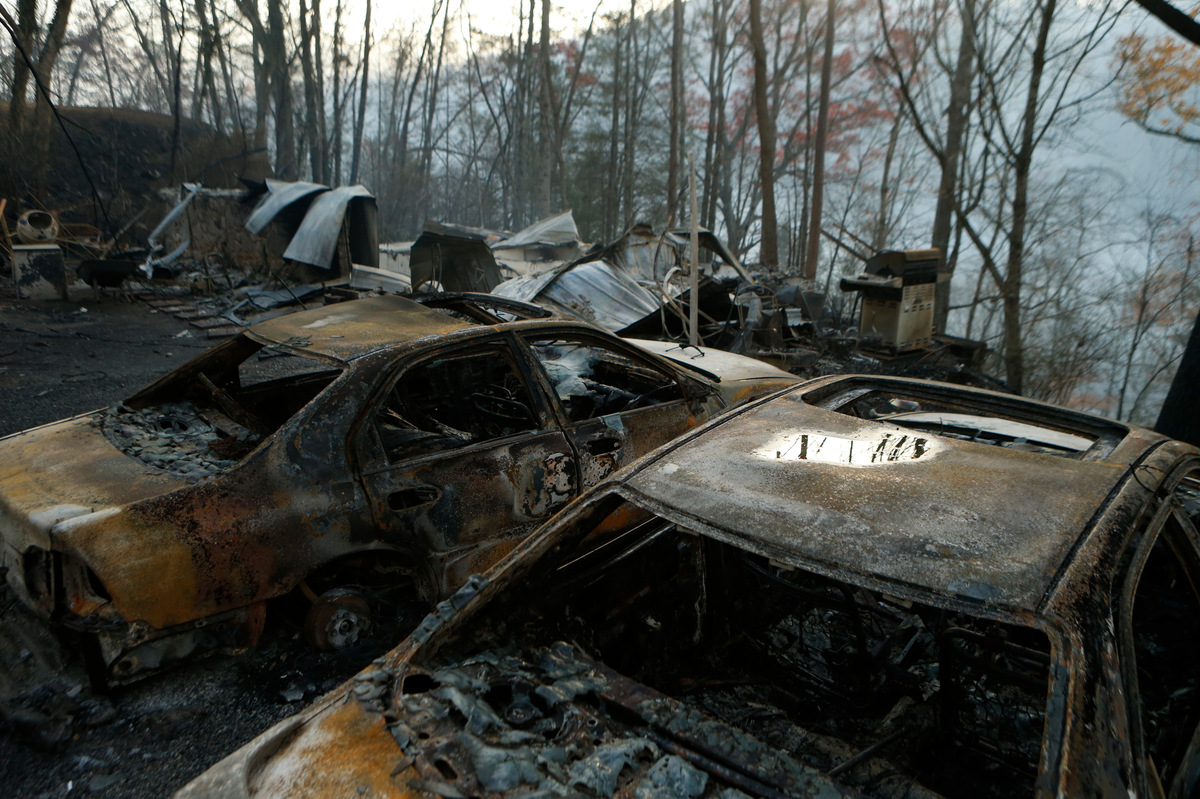 The remains of cars in Gatlinburg. Fire has destroyed more than 150 homes and businesses in Sevier County.

Officials rushed to get people out of town as the fire, which began inside the Great Smoky Mountains National Park, screamed into town on strong winds. On Tuesday and Wednesday, even as rain fell on the region, Gatlinburg's fire chief, Greg Miller, said eight new fires erupted, reported The Tennessean.

Miller said the strength of the wind and the speed of the fire combined with the severe drought conditions the region has been suffering for months to create a situation that caught firefighters off guard, as Nashville Public Radio reported:

" 'There were times ... where we had wind gusts in excess of 87 miles an hour. That is hurricane force. That is nowhere to be when trying to fight a fire,' Miller said.

Embers blew as far as a mile away, sparking new fires.

"At the same time we were facing that challenge, those high winds were knocking down trees. Those trees were hitting power lines and they were falling on this very dry, extreme drought-like condition, and everything was catching on fire." 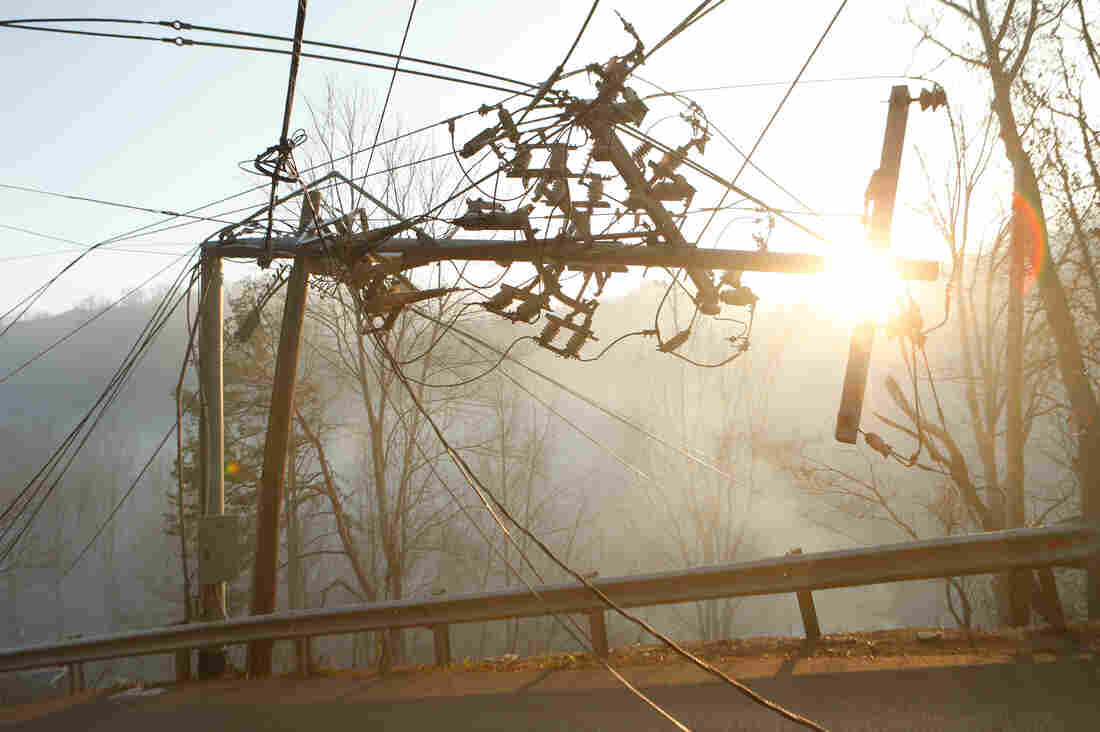 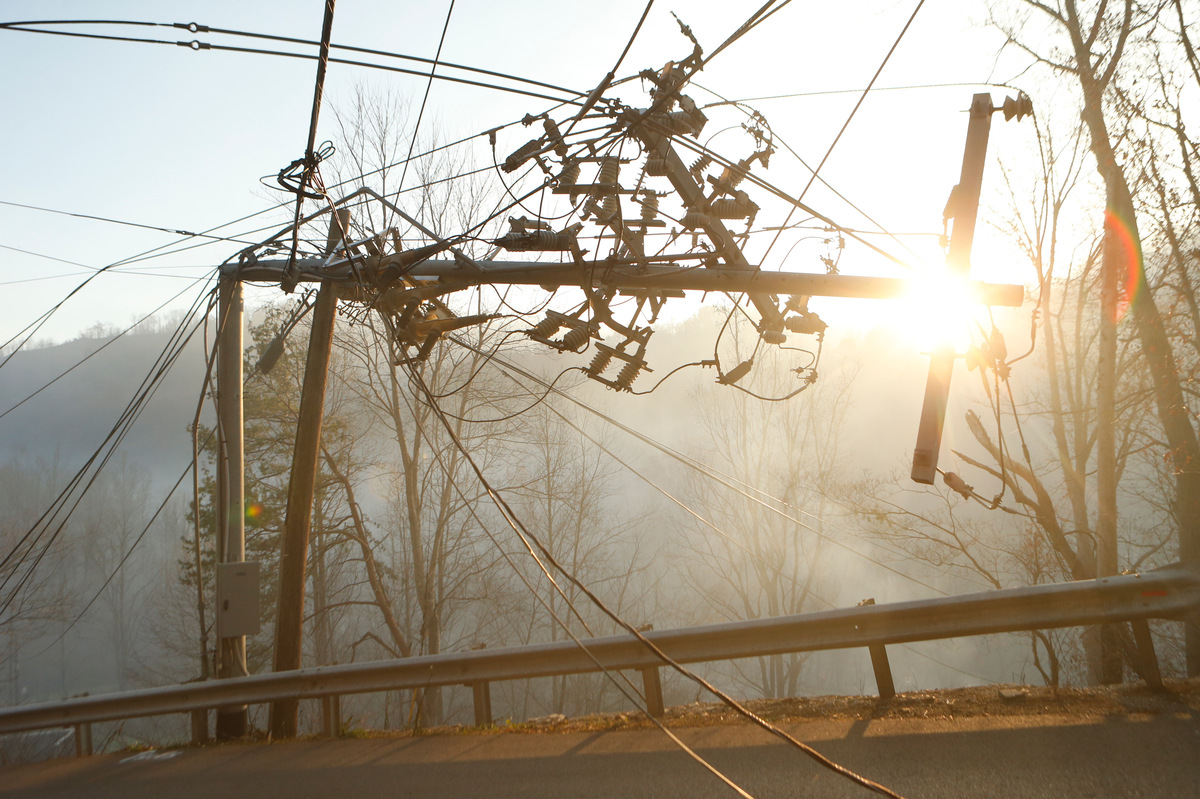 A wildfire knocked out power to thousands of people in eastern Tennessee.

In all, the fire has destroyed more than 150 homes and businesses in Sevier County. On Wednesday morning, more than 10,000 people still didn't have power in the area. The Red Cross said about 1,100 people remained in emergency shelters.

Even as firefighters continued to work to contain blazes outside town, authorities were beginning to assess the damage in the hardest-hit neighborhoods of Gatlinburg.

On some residential cul-de-sacs, only building foundations remain. Where there once were red-tinged leafy forests, there are only the spindly trunks of charred trees.

The Tennessee Highway Patrol went door to door Wednesday checking on residents and sharing information about shelters — Gatlinburg was still under a mandatory evacuation order.

Road were still closed on Wednesday, according to the state department of transportation, as more than 100 members of the Tennessee National Guard helped transportation and utility workers remove debris from roads into and out of town.

Rain falling in the region could help extinguish the fires, but Tennessee Public Radio reported it is also complicating search and rescue efforts, causing "small mudslides on slopes where there's no longer any brush to hold the ground in place."