Accessibility links
OPEC Agrees To First Cut In Oil Production Since 2008 : The Two-Way With the cut, OPEC's production will drop by 1.2 million barrels daily to 32.5 million barrels. The deal takes effect at the start of 2017. 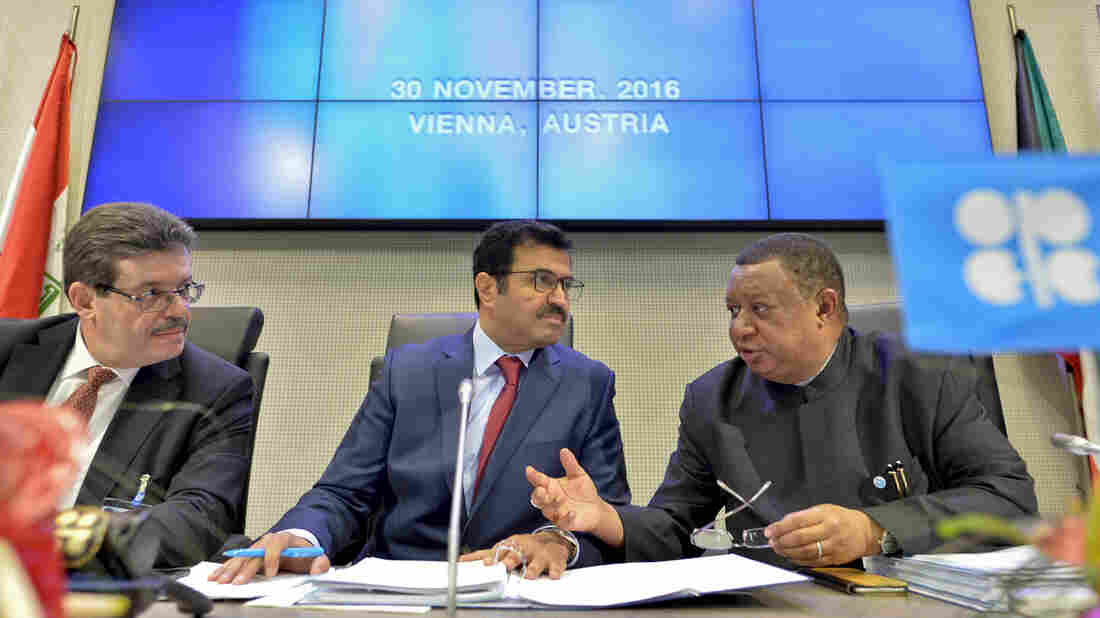 Mohamed Hamel (from left), the chairman of the OPEC Board of Governors; Mohammed Bin Saleh al-Sada, president of the OPEC conference; and OPEC Secretary General Mohammed Barkindo at a meeting of OPEC in Vienna on Wednesday. Herbert Neubauer/AFP/Getty Images hide caption 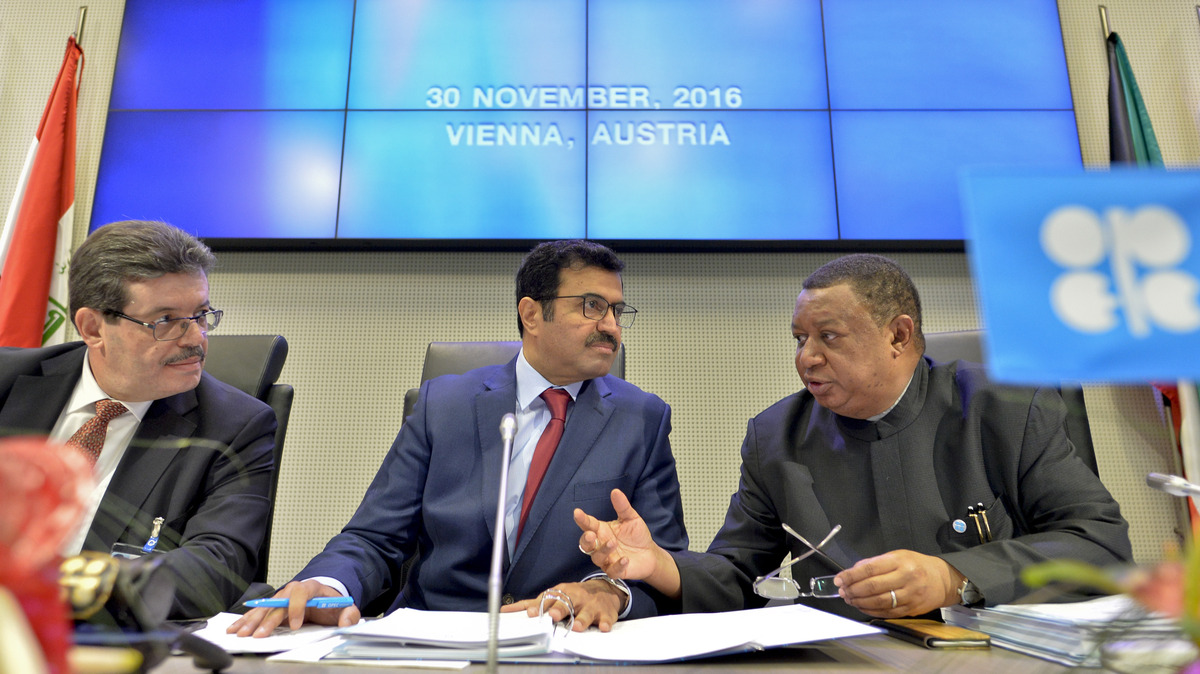 Mohamed Hamel (from left), the chairman of the OPEC Board of Governors; Mohammed Bin Saleh al-Sada, president of the OPEC conference; and OPEC Secretary General Mohammed Barkindo at a meeting of OPEC in Vienna on Wednesday.

For the first time in eight years, the Organization of Petroleum Exporting Countries has agreed to cut oil output, ratcheting down production by 1.2 million barrels per day in hopes of stabilizing the global oil market. News of the deal sent oil futures higher Wednesday morning.

The OPEC reduction is equal to roughly 1 percent of current production worldwide.

"We have made great success today," said Mohammed Bin Saleh Al-Sada, Qatar's minister of energy and the OPEC conference president. "This agreement is out of a sense of responsibility" for all oil-producing nations, he said, as well as the "well-being and health" of the world economy.

He also said that the Russian Federation, a non-OPEC member, agreed to reduce its oil production by 300,000 barrels a day.

He added that because Indonesia is a net importer of oil, the country has suspended its membership in OPEC rather than participate in the production cuts.

OPEC members agreed to the production cut during a meeting of energy ministers in Vienna.

In addition to forming a strategy to cope with rising oil production from non-OPEC members, OPEC's talks on new quotas have also wrestled with the question of how to handle production in Iran as Saudi Arabia's top rival emerges from international sanctions.

On the eve of Wednesday's meetings, Sada said that while there were signs that a re-balancing of the global oil market is underway, "price volatility is still a significant concern."

In contrast, he said, "World oil demand is expected to grow at healthy levels of around 1.2 million barrels a day in both 2016 and 2017."

"Firstly, this remains a growth business, with oil demand in OPEC's 2016 World Oil Outlook reaching over 109 million barrels of oil a day by 2040, a healthy increase of over 16 million barrels a day.

"And secondly, this growth will require significant investments in the upstream, midstream and downstream. Overall, estimated oil-related investment requirements are close to $10 trillion in the period to 2040."