Accessibility links
Charlotte Police Shooting: Officer Will Not Be Charged In Death Of Keith Lamont Scott : The Two-Way Scott's killing unleashed two days of unrest in Charlotte this past September. Scott, authorities said, left his car with a gun and did not listen to police who told him to drop it.

N.C. Officer Will Not Be Charged In Shooting Death Of Keith Lamont Scott

N.C. Officer Will Not Be Charged In Shooting Death Of Keith Lamont Scott 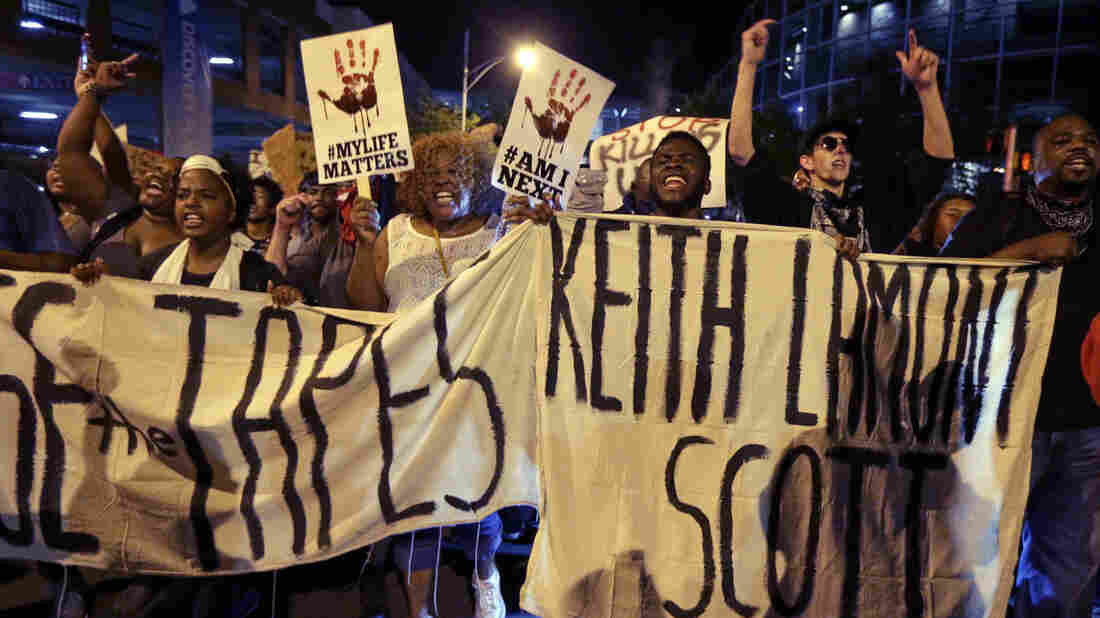 People march in Charlotte, N.C., on Sept. 23 to protest the fatal police shooting of Keith Lamont Scott. The Mecklenburg County district attorney said Wednesday he was "entirely convinced" that the officer who shot Scott "was lawful in using deadly force."

A police officer in Charlotte, N.C., will not face charges in the shooting death of Keith Lamont Scott.

Scott's death in September unleashed two days of unrest in Charlotte, when protesters took to the streets and in some cases threw objects at police and smashed windows.

Murray says that according to evidence recovered from the scene, testimony from officers and body camera footage from several of the officers, Scott emerged from his vehicle with a gun in his hand. The Colt .380, according to Murray, had "one round in the chamber," the safety was off and the weapon was cocked.

"What [the officer] saw was a man who had drawn a gun when confronted by police," Murray said. Officers told him to drop the gun 10 times before Vinson opened fire, hitting Scott twice.

Murray said that investigators found the gun had been stolen and sold to Scott 18 days before his encounter with police.

The district attorney said there was no evidence that Scott raised the weapon, but he said that officers are put in real danger when a suspect has a gun in his hand.

"I'd like to the community to take a collective pause," Murray said. "The community should read [our] report, digest the report. Police did not act viscerally."

The case became national news after Scott's wife, Rakeyia, released cellphone video of his encounter with police. She is heard pleading with police not to shoot him.

"He doesn't have a gun," Rakeyia is heard saying in the video. "He has a TBI [a traumatic brain injury]. He's not going to do anything to you guys. He just took his medicine."

Murray said the evidence proves that Rakeyia's testimony, as well as testimony from other witnesses who said Scott was not armed, was inaccurate.

Charles Monnett, the Scott family attorney, said family members are reviewing the evidence but that they still have concerns. Specifically, Monnett believes police could have de-escalated the situation and did not.

While Vinson will not face criminal charges, Monnett said, he could still face civil and administrative punishments.

"We look forward to one day obtaining justice for Mr. Scott," Monnett said.