Accessibility links
PHOTOS: Mass Exodus From Aleppo's Rebel Stronghold As Regime Forces Close In : The Two-Way More than 50,000 people have fled eastern Aleppo in the past four days, according to a monitoring group. This battle for the city could mark a turning point in Syria's war, now in its sixth year. 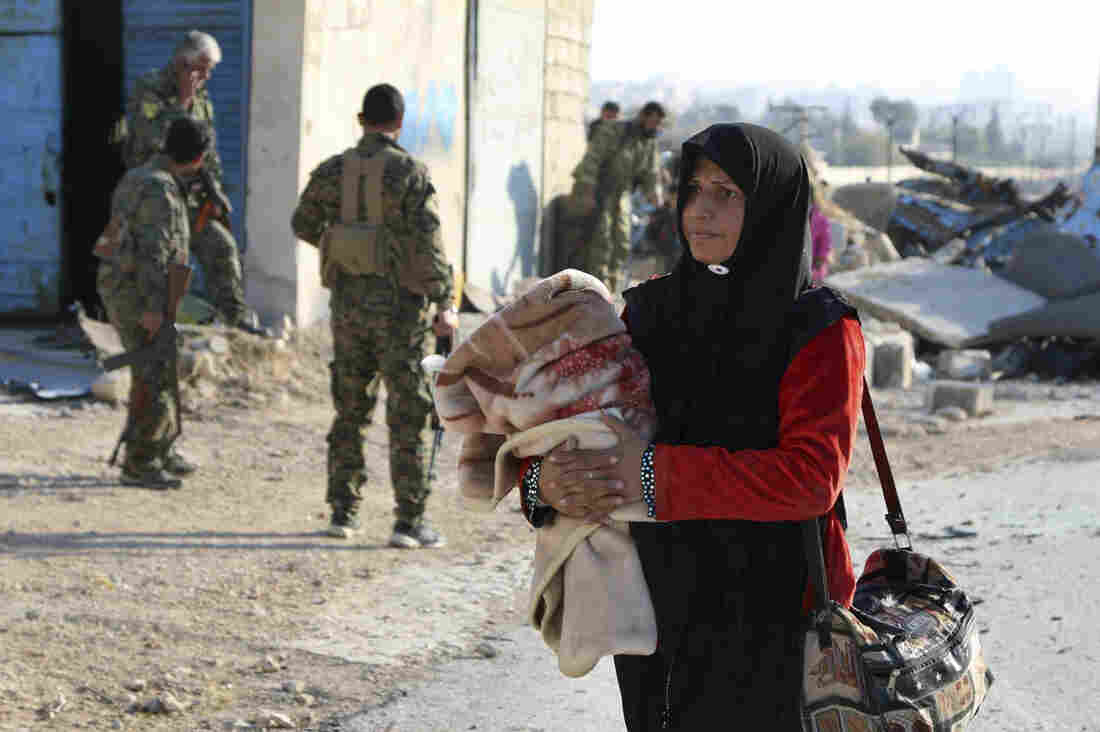 A Syrian woman carries her belongings past Kurdish fighters as she flees on Sunday. The Syrian Observatory for Human Rights says shelling has killed 26 people who were trying to flee eastern Aleppo. AP hide caption 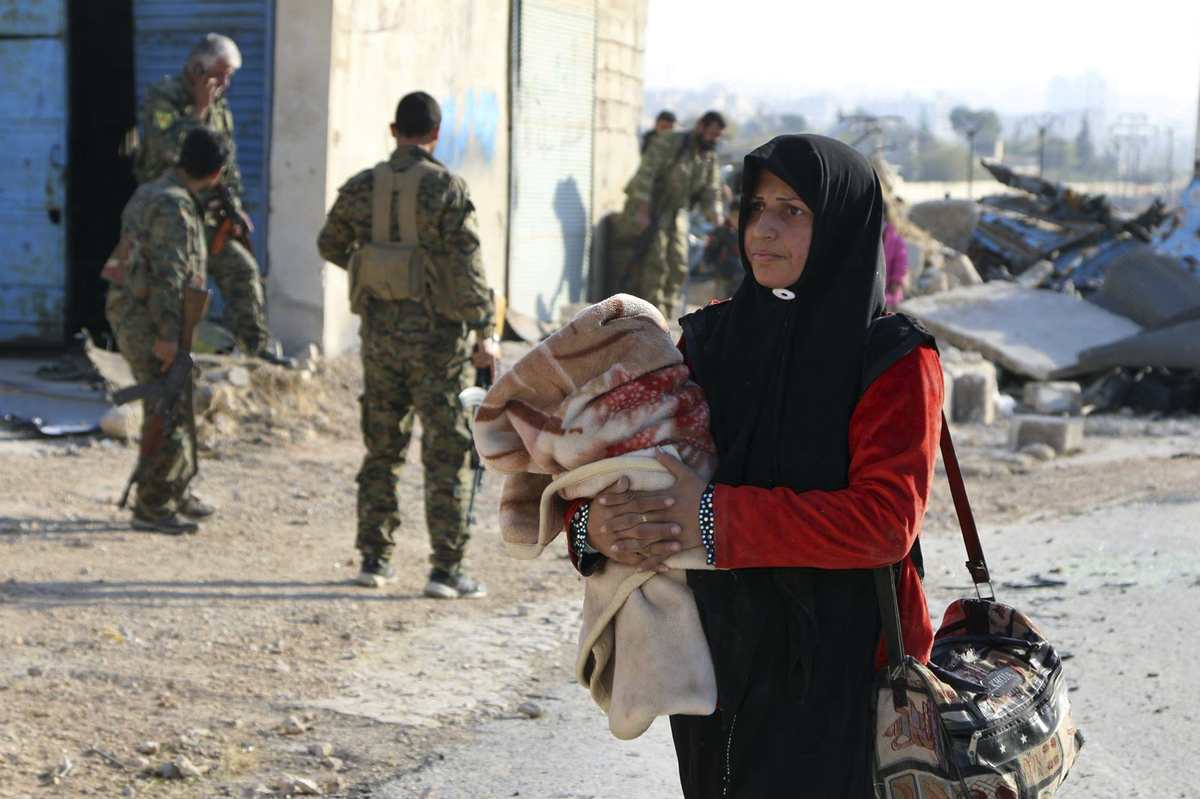 A Syrian woman carries her belongings past Kurdish fighters as she flees on Sunday. The Syrian Observatory for Human Rights says shelling has killed 26 people who were trying to flee eastern Aleppo.

Tens of thousands of Syrians have fled the rebel-held neighborhoods of eastern Aleppo, as Syrian regime forces make major gains.

This is a crucial battle in Syria's war, which is now in its sixth year. As NPR's Alice Fordham reports, "If [government forces] continue to press forward into that rebel-held area of the city of Aleppo, this will be the really last urban stronghold held by the rebels. And if they lose this, it will look a lot like they're on their way to losing the war."

More than 50,000 people have fled eastern Aleppo in the past four days, according to the U.K.-based Syrian Observatory for Human Rights. The Red Cross put forward a lower number Tuesday, saying about 20,000 had fled. 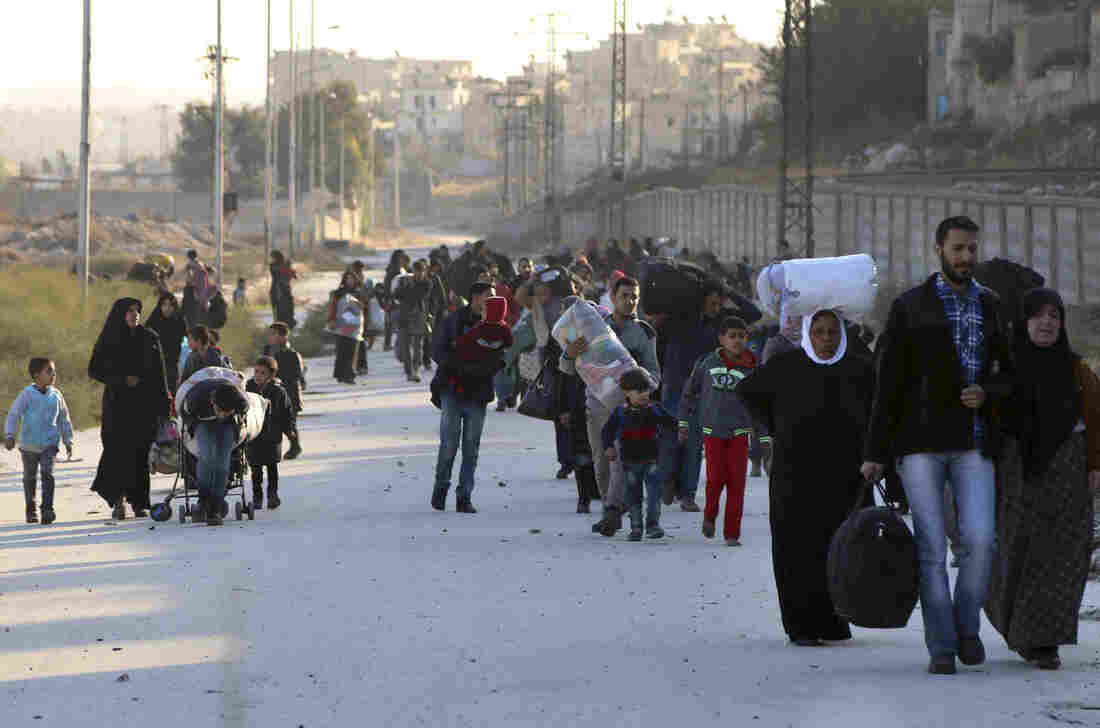 People flee rebel-held eastern neighborhoods of Aleppo on Sunday into the Sheikh Maqsoud area, which is controlled by Kurdish fighters. AP hide caption 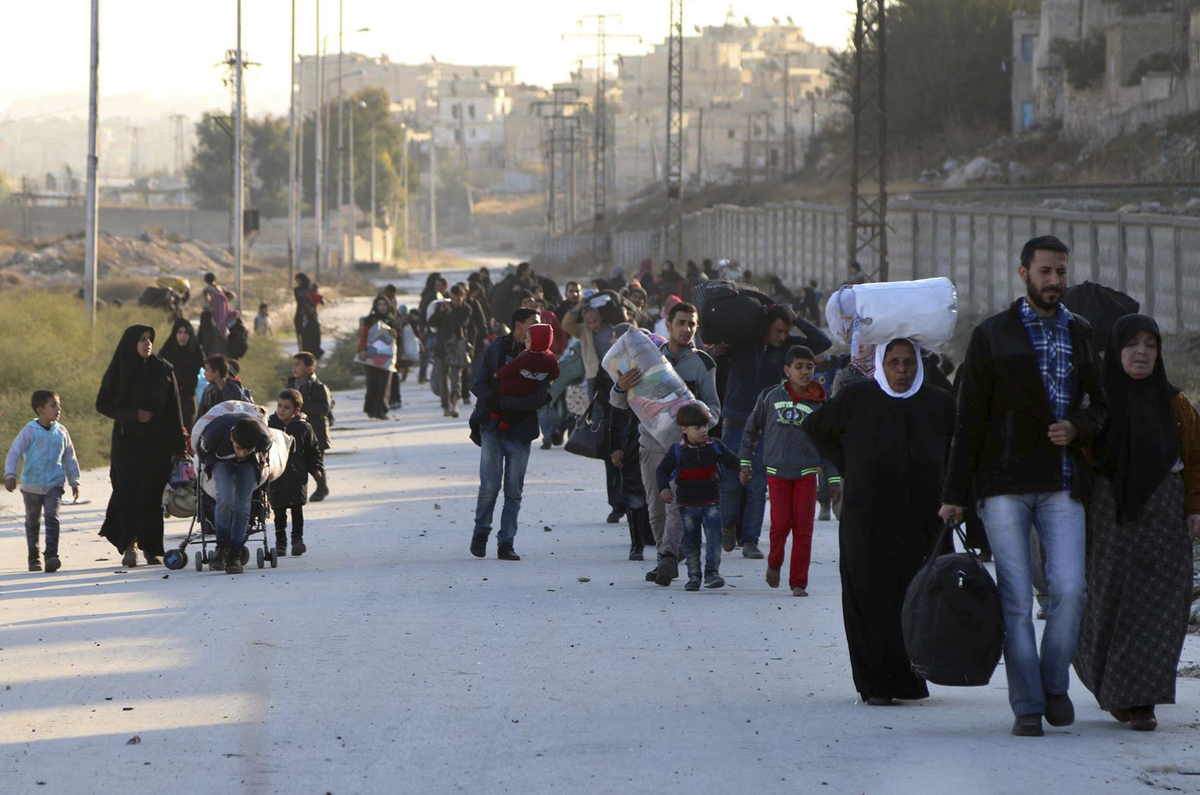 People flee rebel-held eastern neighborhoods of Aleppo on Sunday into the Sheikh Maqsoud area, which is controlled by Kurdish fighters.

Some civilians have died trying to escape these areas amid the massive assault. The observatory says shelling has killed 26 people who were trying to flee, as NPR's Alison Meuse tells our Newscast unit:

"Activist footage from Aleppo shows bodies scattered in a street of rubble. The body of one woman is just inches from her packed duffel bag. A man wails over another body covered in a blanket. Opposition activists say these people were trying to flee to the government-held districts, but that they came under regime shelling. Other videos have emerged in recent days that appear to show civilians fleeing with rebel fire at their back."

Tonight we have no house, it's bombed & I got in rubble. I saw deaths and I almost died. - Bana #Aleppo pic.twitter.com/arGYZaZqjg

Among those who have fled their homes during the latest round of fighting is 7-year-old Bana Alabed. A Twitter account managed by her mother tells the story of Aleppo through the girl's eyes. Recent tweets chronicle the military's advance into their neighborhood and their harrowing escape. A tweet Monday said she had sustained a "minor injury" and that her family now has no home.

A new round of fighting was reported Wednesday in southeast Aleppo, though conflicting reports are emerging about which side made gains.

"The army and its allies said they had taken the Sheikh Saeed district in the south of the city on Wednesday," Reuters reports. "Rebels denied this, saying the government's advance had been repelled." The observatory says rebel forces continue to hold about a third of the district.

The civilians fleeing for their lives now are, in many cases, people who have remained in the area over the course of years of fighting and siege. Alice had this to say about the complicated, sensitive question of why they've stayed:

"The number of people that are there is perhaps roughly a quarter of the people that did live there [before the war]. But the officials in the Assad regime say it's very simple — the rebel forces inside that area are terrorists and they have refused to allow those last people to leave their neighborhoods and head to safety.

"But we know that Assad regime statements often don't reflect reality in Syria, so we ask opposition leaders and rebels and activists and residents, why are people still living in this neighborhood when it's so difficult, it's so dangerous? And they say people there won't leave their homes because they're afraid of the regime. They are more afraid of being in a government-controlled area than they are of being bombed.

"And they also say people there support the rebels. They support the opposition. They want to be there, and they are proud of them. So those are two opposing versions of what's happening there. On digging a little bit deeper, some people who know eastern Aleppo really well say, privately, well, it might be a bit of both. The rebels clearly couldn't force everyone to stay because lots of people have left."

The Syrian Observatory for Human Rights says that some of those who fled have reached neighborhoods controlled by rebels. Others have arrived in regime-controlled areas, where "hundreds of civilians are facing arrests and investigation by the regime, and some of them are still under detention." 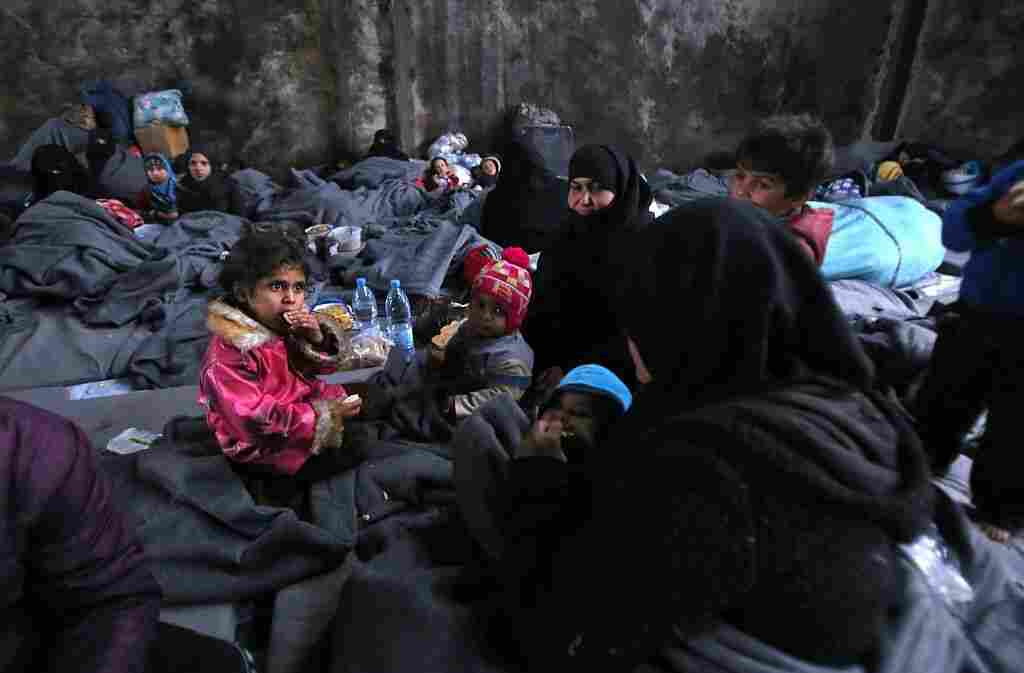