Accessibility links
Blocking Supplies To Pipeline Protesters Would Be 'Huge Mistake,' N.D. Governor Says : The Two-Way Gov. Jack Dalrymple said Wednesday his emergency evacuation order for areas near the route of the Dakota Access Pipeline did not authorize roadblocks or forcible removal of people. 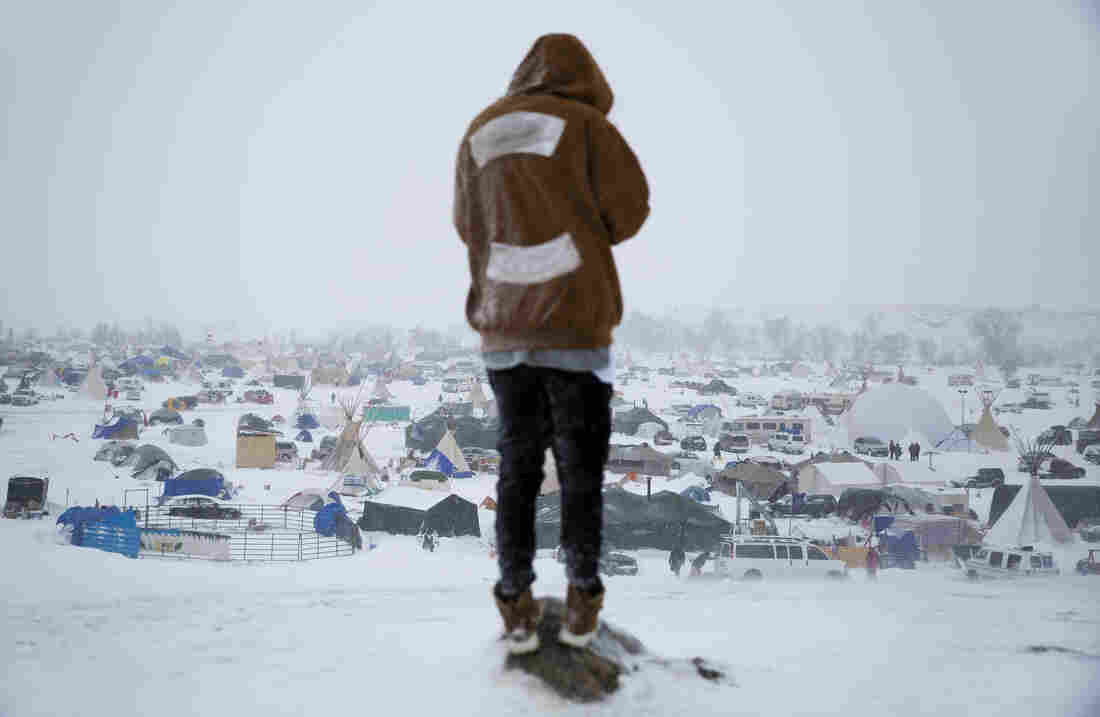 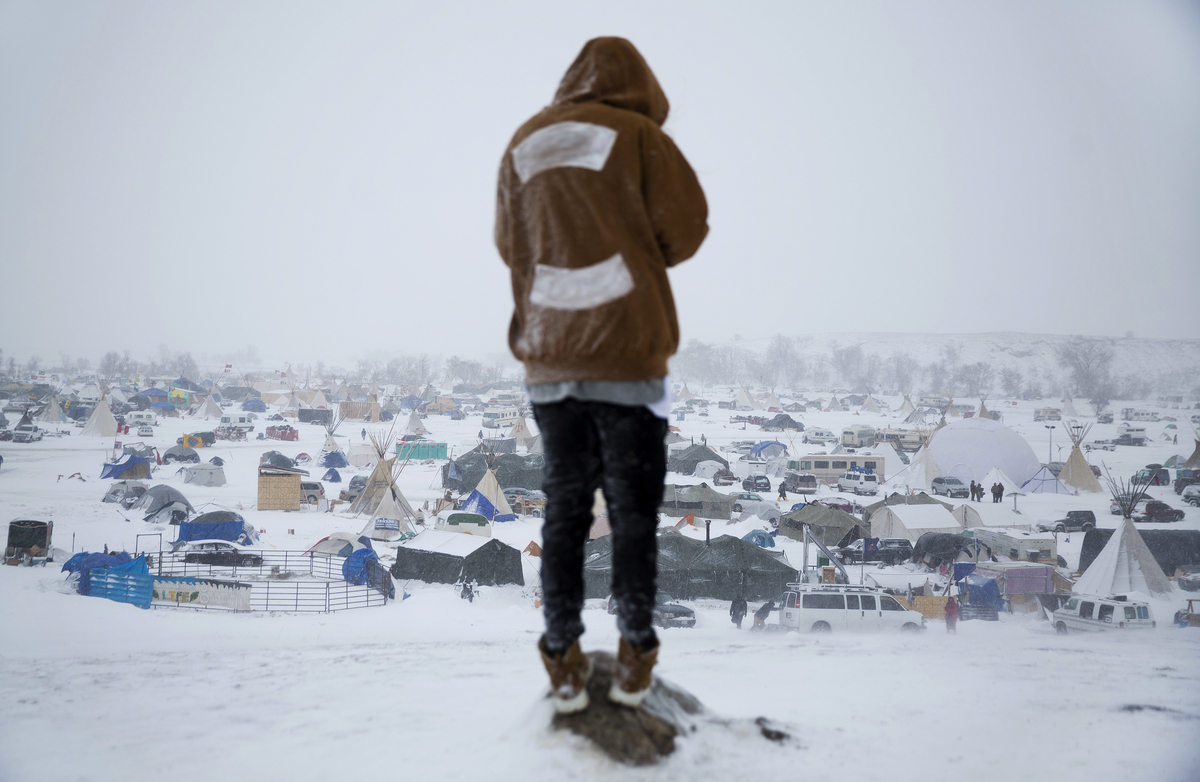 Damin Radford of New Zealand overlooks the Oceti Sakowin camp on Tuesday, where people have gathered to protest the Dakota Access pipeline near Cannon Ball, N.D.

The governor of North Dakota says he has not authorized roadblocks or forcible removal of protesters from the area near the route of the Dakota Access Pipeline.

Gov. Jack Dalrymple spoke to reporters in an effort to clarify the implications of an evacuation order he issued earlier this week, which he said had led to "some miscommunication" with local law enforcement.

"An emergency evacuation order means we believe there is a threat to your health and safety, and we are advising you to leave that area," Dalrymple said, addressing his comments directly to members of the Standing Rock Sioux Tribe and other protesters who have camped north of the tribe's reservation land and just south of the place where the oil pipeline is planned to cross under the Missouri River.

Earlier this month, the Army Corps of Engineers said it needed more information before it could decide whether to allow the pipeline to cross the river at the planned location. Members of the tribe say the pipeline could contaminate water, and that the route threatens sacred lands.

The governor's emergency evacuation order authorized "a mandatory evacuation of all persons located in areas under the proprietary jurisdiction of the United States Army Corps of Engineers located in Morton County," which includes one of the main camps where protesters are living.

However, as we reported, North Dakota Emergency Services spokeswoman Cecily Fong told NPR the state would not "be using law enforcement or the national guard to enforce the order."

Nonetheless, the day after Dalrymple's office issued the order a spokesperson for the Morton County Sheriff's Department told the Bismarck Tribune that people driving supplies, including food or blankets, to the camps could be pulled over and face a fine of up to $1,000.

"The spirit of it is public safety," sheriff's spokesperson Maxine Herr told the paper, citing the governor's order as the reason for the policy. "It's not safe for them to be down there in those conditions."

On Wednesday, the governor reiterated that "we will not be blocking supplies to people, food, water and clothing. Obviously that would be a huge mistake from a humanitarian standpoint to do anything like that."

"We are not going to have roadblocks and we are not going to stop vehicles," he said. "All we're saying [with the evacuation order] is we encourage you to find somewhere else to be. ... This area is dangerous."

The danger, Dalrymple said, comes from the weather. More than a foot of snow has fallen in the area this week. Asked whether the order was meant to release the state from liability should a protester be hurt, the governor said he was "not sure about the law," and that he thought it was "our duty to warn them of danger."

As for 911 calls coming from the area of the protest camp, he did not guarantee that emergency crews would respond, saying law enforcement would consider calls on a "case-by-case basis."

"If there was an accident of some kind, there's serious questions about whether we would be able to get in [and] do a rescue," he said.

The Army Corps of Engineers, which manages the land on which some protesters are camping north of the Cannonball River, said last week that anyone in that area after Dec. 5 would be considered trespassing and subject to prosecution.

The Corps has since said it had no plans to forcibly remove people from the land.

It is unclear how the Dec. 5 deadline will change conditions for protesters, if at all. A group of U.S. military veterans said they had organized about 2,000 people who planned to arrive at the protest site on Dec. 4, to serve as "human shields" organizers told The New York Times.